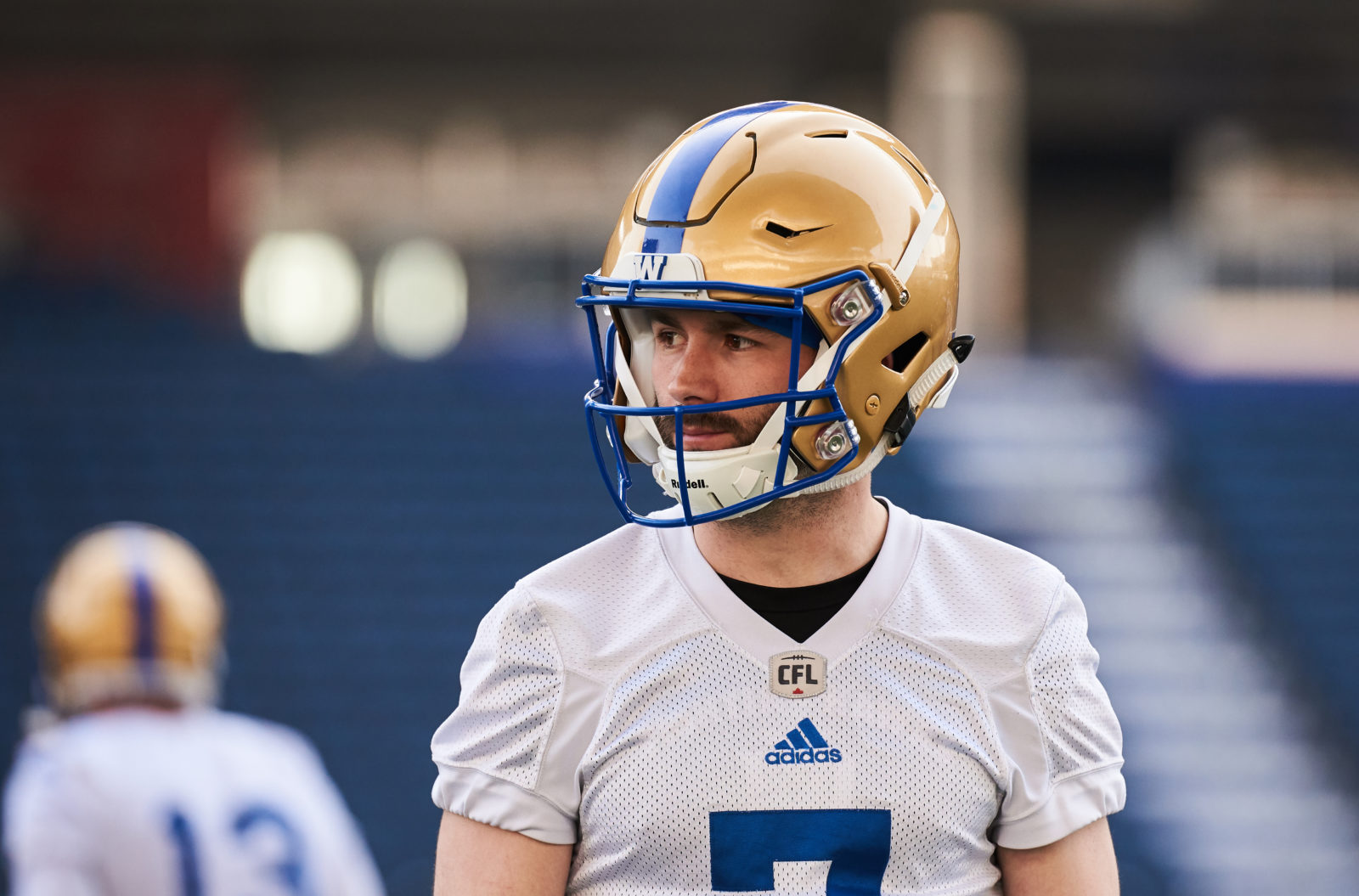 Chris Streveler will slide behind the wheel of one of the Canadian Football League’s most potent offences this week with a straight forward assignment:

Keep your hands on the wheel, the car on the road, and let this high-octane engine do the rest for the Winnipeg Blue Bombers.

Bombers head coach Mike O’Shea confirmed what had become obvious from the start of Monday’s practice session: Streveler, a rookie straight from the University of South Dakota, will get the start for the injured Matt Nichols this Thursday against the Edmonton Eskimos in the Canadian Football League’s curtain raiser for the 2018 season.

“We said it was going to be an evaluation of everything they’ve done up to this point and we just feel he’s won that competition,” said O’Shea. “I thought he did very well through camp and played well in the games.

“I think he gives us a good chance to go out there and lead the team and win games. It’s not always solely on the quarterback’s back, either. We’ll play our game, execute the way we should and win a football game.” 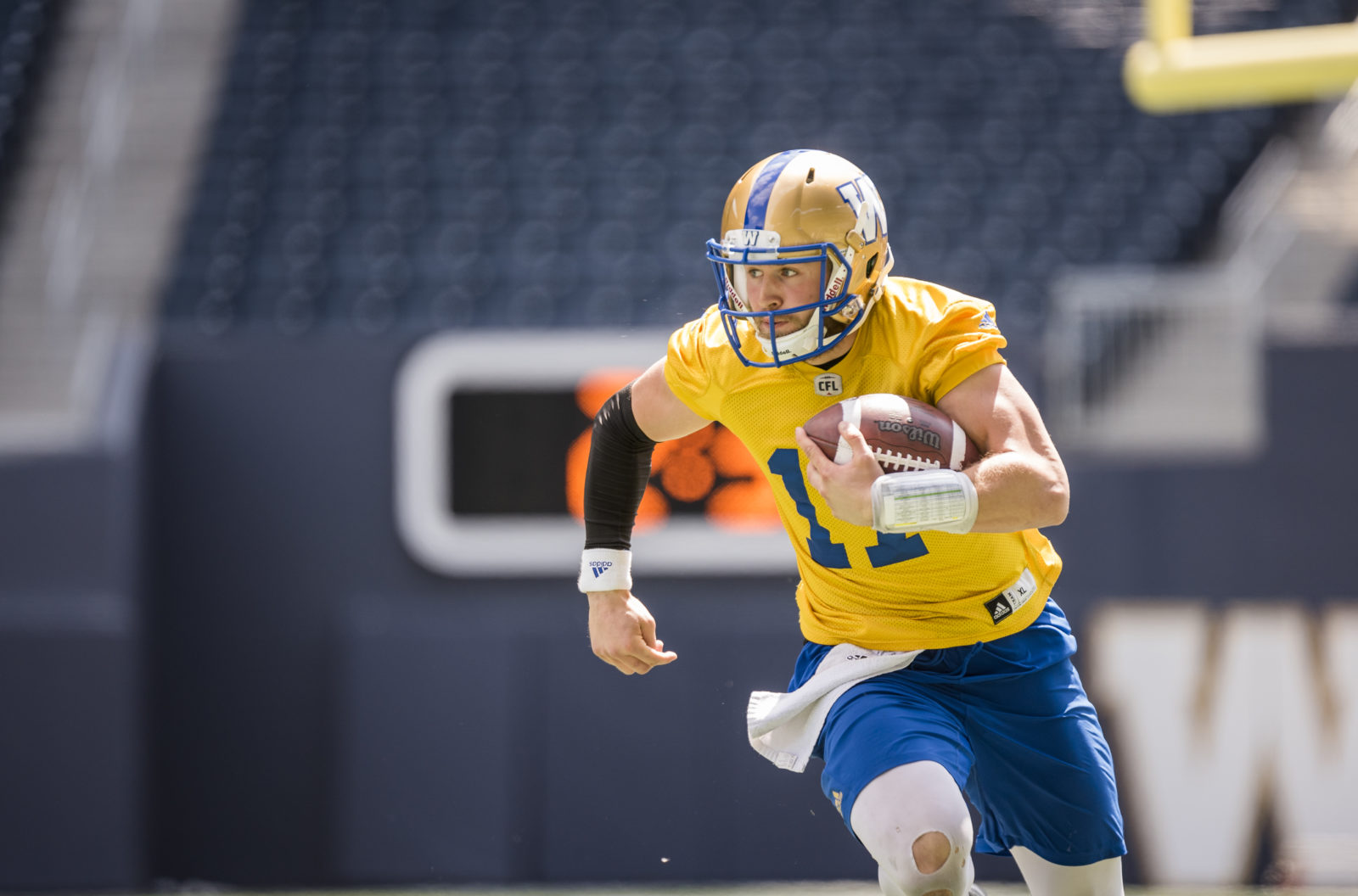 Streveler’s transformation from a guy who attended the mini-camp in April strictly to get a feel for the Canadian game – he didn’t take a snap, but soaked up the environment before signing a week later – has been nothing short of remarkable.

As rookie camp and main training camp opened, he was viewed as a bonafide prospect who might be able to push Alex Ross, who had a year with the B.C. Lions last season, for the No. 2 gig behind Nichols.

But as the days unfolded, Streveler became more comfortable working in Paul LaPolice’s offence and that was backed up with his 10-for-10 performance against the Edmonton Eskimos in the first pre-season game.

The 23-year-old product of Crystal Lake, IL was just 3-of-9 in last Friday’s second pre-season game in Vancouver, but did fire a 32-yard TD strike to Kenbrell Thompkins.

Streveler, whose last meaningful game was for a 54-42 loss to Sam Houston State in the second round of the FCS playoffs last December 2nd – a game in which he threw for 520 yards and five touchdowns while rushing for 51 yards and another TD – becomes the first rookie QB to start a CFL season for a team since Anthony Calvillo for the Las Vegas Posse in 1994.

“Everybody can see his athleticism,” said O’Shea (the quarterbacks did not speak to the media on Monday). “That’s the least of the qualities that are going to make him successful. It’s the processing… he gets through the playbook and the plays that are called very quickly. He retains the information and makes good, quick decisions. And then comes the athleticism.”

Streveler was working with the starting offence when practice began Monday morning, lining up behind arguably the CFL’s best offensive line, with the league’s rushing champion behind him in Andrew Harris and surrounded by three receivers who have posted 1,000-yard seasons in their careers in Weston Dressler, Adarius Bowman and Darvin Adams. 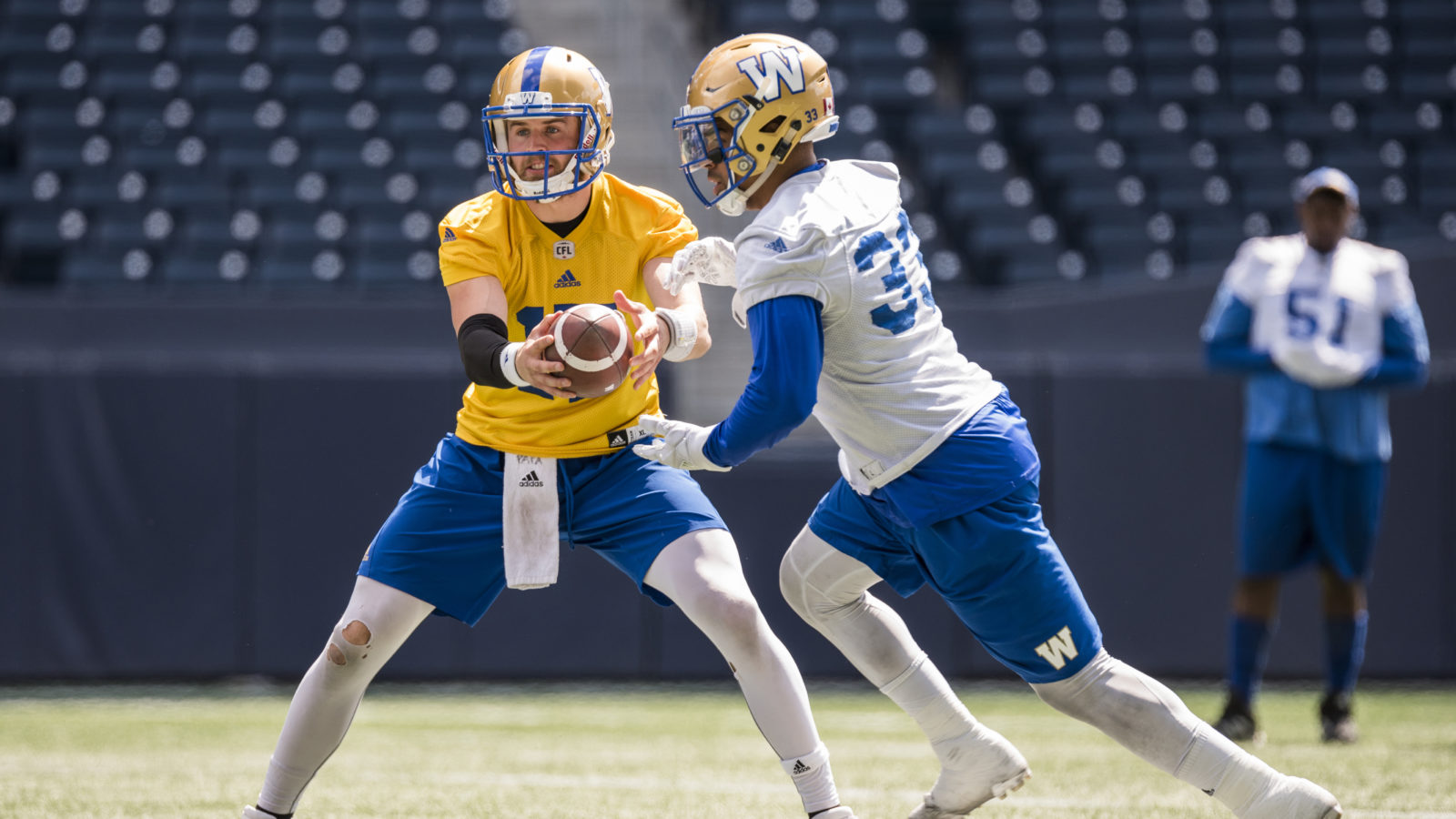 “He’s young, a real pro rookie with no experience before coming here,” began Dressler. “Taking all that into account, he’s done a tremendous job as far as picking up the playbook, picking up the CFL playbook itself. I mean, the guy’s been here for two weeks and he’s starting a game for us in a couple of days.

“He’s going to make some mistakes, but we’ll be there to back him up when those happen. I’m excited for him, excited to see what he can do out there and I know he’ll give us a chance to win the game.”

After practice O’Shea was asked if, because Streveler is a rookie, the club would take any special precautions so he wouldn’t be overwhelmed or if the playbook might be reduced.

And that brought out the banter in the Bombers boss.

“Yeah, I’m going to go tuck him in at night,” said O’Shea. “He’s a pro athlete, he’s going to be just fine. He really will be. No, we’re not going to limit the playbook or whatever. 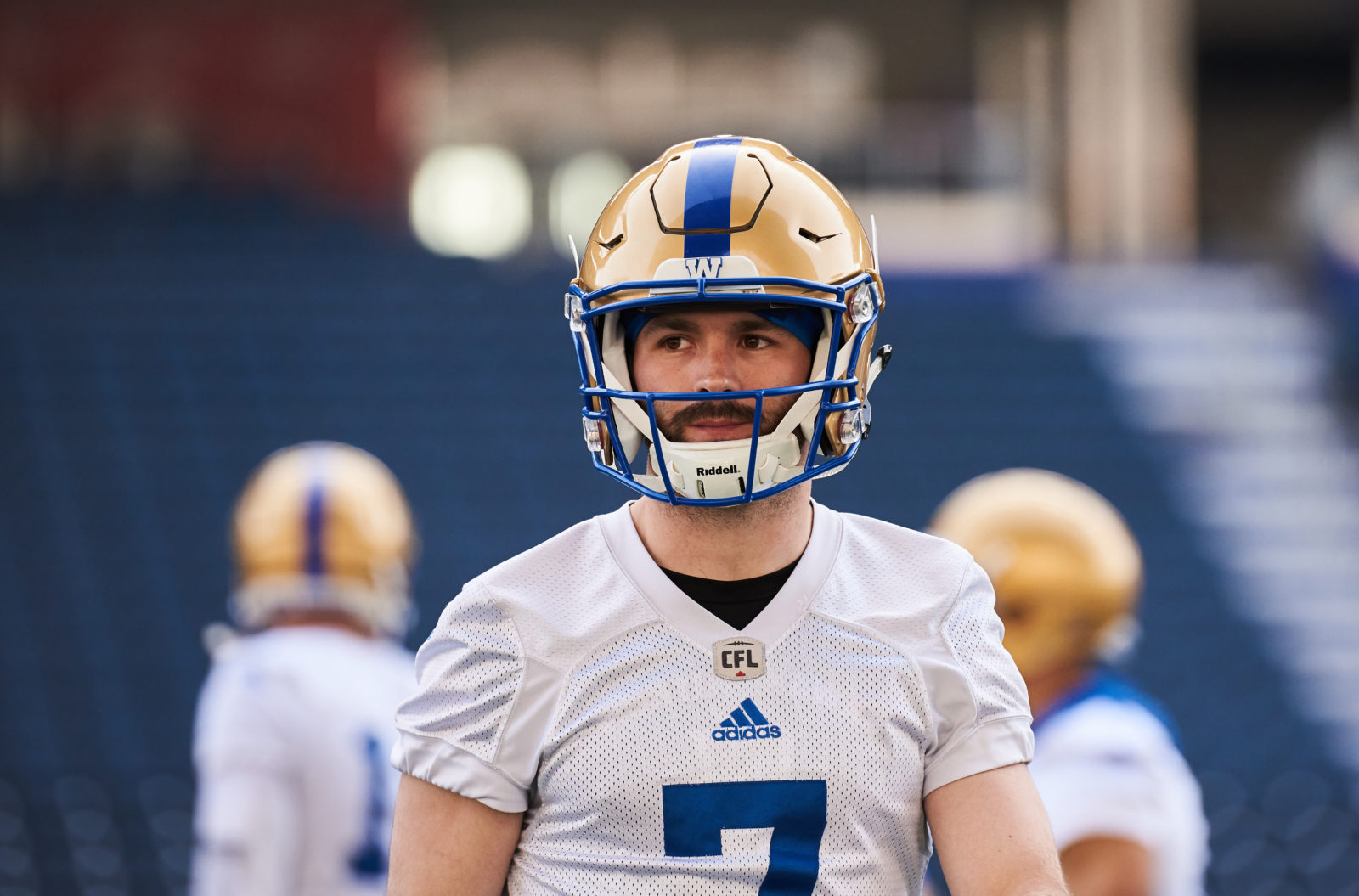 OL Jermarcus Hardrick and SB Nic Demski, both of whom were nicked up a bit last week, were back working with the starting offence on Monday.

Meanwhile, LB/DB Maurice Leggett was practising for the first time, although it’s uncertain he would be green-lighted to play after such a short practice week.

“We said we’d be cautious with him from the start,” said O’Shea. “I think he’s probably very close to being physically ready, but we don’t want to push it either. We’d like to see what he can do for a full practice and for a full practice week before we make any decisions like that.”

O’Shea also weighed in on some of the roster decisions made on the weekend as the club had to make some tough calls on players.

“That decision was really tough. Faith is a good football player, a good guy and a guy you’d like to have in the building longer. But when we signed Jake Thomas and you’re out there watching all the reps and watching the film of all the one-on-ones, Jake Thomas is still a better football player right now.

“There are other factors that come into play, salary being one of them, the change in the ratio… those kind of things a lot of times are out of the player’s control. I would assume he’s going to be successful somewhere else. Lots of players are when they get a second opportunity.”

On the release of DB Brian Walker, who played in 15 games, starting 13 last year:

“I thought he had improved but the talent at camp really improved. Brian Walker was another tough one because he put in a lot of games with us last year and we won a lot of games with us playing. And he was 21 years old last year. He’s only 22. He’s a guy you’d like to keep around and see develop, but we had some other young guys come in that made some plays. You can’t keep them all. That’s the problem.”

Former Bombers kicking prospect Félix Ménard-Brière accepted a practice roster agreement with the Ottawa REDBLACKS on Monday – after turning down a similar opportunity here on the weekend. Ménard-Brière was a perfect 4-for-4 in field goal attempts over two pre-season games, but was listed behind veteran Justin Medlock on the depth chart here, while Ottawa will likely go with two kickers to start the season in Canadian Lewis Ward for placekicking and import Richie Leone for punts and kickoffs.

“I really appreciate Felix and the work he did,” said O’Shea. “He went out on the field in B.C. and banged a 52 yarder and punted well. He’s going to be a successful kicker. But, as I spoke to him, you look at the B.C. situation with Lui Passaglia… there’s a couple hall of famers who had been cut because he had a job for 24 years or whatever it is. It takes so long for kickers to break in. They just have to have the right opportunity. Hopefully, Felix gets an opportunity to get on the field. It would be unfortunate it’s not with us, but we’ve got Justin Medlock and I would say he’s the best kicker in the league and maybe the best ever.”