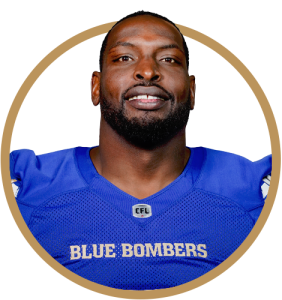 The veteran right tackle continued to serve as one of the club’s leaders and as a fixture along a dominant offensive line. Hardrick was part of an offence that finished second in offensive points (28.2), first in touchdowns (58), second in rushing yards (113.5) while yielding the second-fewest sacks (29).
Hardrick and the O-line played pivotal roles in quarterback Zach Collaros being named the CFL’s Most Outstanding Player for a second consecutive season and the first 1,000-yard rushing campaign in Brady Oliveira’s career.
He has now appeared in 115 regular season CFL games, including 95 as a member of the Blue Bombers, 12 with the B.C. Lions in 2014 and eight with the Saskatchewan Roughriders in 2015 and was a member of Winnipeg’s back-to-back Grey Cup teams in 2019 and 2021.
Hardrick signed a one-year contract extension to remain with the club on January 11, 2023.

The Bombers led the CFL in scoring in ’21, surrendered the fewest quarterback sacks and finished second in rushing behind three different running backs in Andrew Harris, Brady Oliveira and Johnny Augustine. Hardrick’s role in all that while lining up at right tackle was massive and he was recognized by not only being named to the West Division All-Star Team for a second time, but also honoured with a spot on the CFL All-Star Team — a first in his career.
Hardrick signed a one-year contract extension to remain with the Blue Bombers on January 6, 20222.

Hardrick started all 18 regular-season games and the three playoff contests for the Bombers in 2019 and was part of a unit that helped Andrew Harris capture his third-straight rushing title.
Hardrick signed a one-year contract extension with the club on December 30, 2020.

Hardrick followed up a solid 2017 season with another stellar campaign in 2018. He missed three games due to injury, but for the other 15 — all starts — was a dominant presence at the right-tackle position along an offensive line that helped the Bombers finish first in scoring and Andrew Harris capture his second-straight CFL rushing title.

Made 18 starts at right tackle as part of a steady offensive line that was critical in winning the rushing title and finishing second in scoring. His consistent play earned him a spot on the West Division All-Star Team and he was rewarded with a new contract after the 2017 season.

Signed as a free agent and started 16 games in his first season with the club. Played a critical role in the team’s turnaround in 2016 and was part of a unit that dramatically cut down the quarterback sacks allowed.

Played at Fort Scott Community College before transferring to Nebraska where he became a regular starter at tackle. Spent two seasons with the Cornhuskers and went undrafted in the NFL in 2013. Had tryouts with Tampa Bay and New Orleans along with a stint in the Arena Football League with the Utah Blaze.