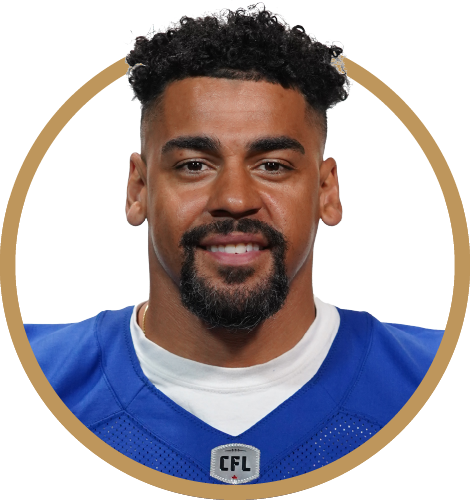 The Winnipeg-born product authored another sensational year, and capped it with a memorable performance in the club’s victory in the 107th Grey Cup for which he was honoured as both the game’s Most Valuable Player and Most Valuable Canadian. Harris rushed 18 times for 134 yards and a touchdown in the win, adding five catches for 35 yards and another TD in helping end the franchise’s long championship drought.
His regular-season numbers were equally impressive, as he rushed for 1,380 yards and four touchdowns to capture his third consecutive CFL rushing title — the first Bombers running back to do so — while adding 70 receptions for 529 yards and four more touchdowns, all this coming in 16 games following a two-game suspension. Included in those numbers was his work in a win over Montreal on October 12th in which he rushed for a career-best 166 yards. Those totals moved him into 6th place on the Bombers all-time rushing list with 4,779 yards and into 10th place in receptions with 300.
As well, Harris became the CFL’s all-time leader in yards from scrimmage by a Canadian player, surpassing Ben Cahoon with a total that is now at 14,145 and growing, while also moving past Normie Kwong to become the league’s all-time leader for rushing yards by a Canadian with 9,038. That total now ranks him eighth on the CFL’s all-time list and just 302 yards shy of moving past Joffrey Reynolds and Kelvin Anderson into sixth spot.
Harris signed a one-year contract extension to remain with the club on January 15, 2021.

Harris put together another all-star season in 2018, winning his second-consecutive CFL rushing title with a career-best total of 1,390 yards along the ground. It marked the first time since Charles Roberts in 2005-2006 that a Bomber running back had led the league in rushing in back-to-back seasons. Harris also added an additional 451 yards receiving on 58 receptions, the third-highest total on the club. His 11 touchdowns — eight rushing, three receiving — tied for third-most in the CFL. Harris eclipsed the 1,000-yard rushing mark for the fourth time in his career (previously: 2017 with Winnipeg;  2012 and 2015 with the B.C. Lions) and now has 3,399 rushing yards as a Bomber, moving him into 10th place on the club’s all-time list, ahead of Ken Ploen. Harris now also ranks 12th on the CFL’s all-time rushing list with 7,658 yards and 42 touchdowns.

Put together a sensational season, leading the CFL in rushing with 1,035 yards to become the first Bomber to win the rushing crown since Fred Reid in 2010… Led the CFL in receptions with 105, breaking a record for catches by a running back, set by Saskatchewan’s Craig Ellis (102) in 1985… His 105 receptions also smashed the Bombers record of 71, set by Robert Mimbs in 1990… Led the CFL in yards from scrimmage with 1,892 (1,035 rushing, 857 receiving)… Named the CFL’s Most Outstanding Canadian Player, his first league-wide award, and was selected to the CFL and West Division All-Star Teams for the fourth time.

Signed with his hometown Bombers as a free agent on February 9, 2016… Completed his seventh CFL season by finishing third in the league in rushing with 974 yards, including two 100-yard rushing games… Led all CFL running backs with 631 receiving yards on 67 catches, the second highest-total in his career… Named to the CFL and West Division All-Star Teams… Missed three games in the second half of the season, but finished with 61 yards rushing and four catches in the 2016 West Semi-Final vs. B.C.

Signed with BC in 2009 as a territorially-protected junior player… Spent a year on B.C.’s practice roster before becoming a regular in 2010… Missed just six of the first 108 games of his CFL career due to injury… Led the CFL in yards from scrimmage in both 2012 and 2015… Was named the Lions Most Outstanding Canadian in both 2012 and 2013.

A product of the Eastman Raiders minor football program and then both the Grant Park Pirates and Oak Park Raiders in the Winnipeg High School Football League, Harris moved on to compile a number of record-breaking performances over five seasons with the Vancouver Island Raiders of the British Columbia Football Conference, leading his club to back-to-back Canadian Bowl championships in 2008 and 2009… Harris holds the all-time Canadian Junior Football League scoring record and all-time CJFL touchdown record and was named to the CJFL All-Canadian Team four times (2006-09) and was the Canadian Bowl Offensive Player of the Game twice (2006, 2008).