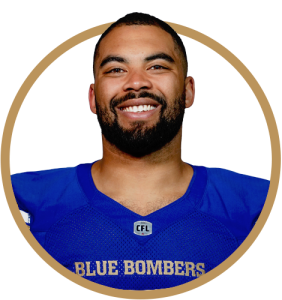 The multi-dimensional Demski had his best season as a professional, finishing 2021 with 48 receptions for 654 yards and four touchdowns and adding another 13 rushes for 87 yards and another score — all coming in just 12 games. Demski then added 10 catches for 78 yards in the playoffs, including a critical 29-yard fourth-quarter touchdown in the 108th Grey Cup victory that was a momentum changer in Winnipeg’s rally.
His numbers — including a career-best 654 yards receiving — earned him a spot on the West Division All-Star team, a first for Demski, and a salute as the Blue Bombers Most Outstanding Canadian Player.

Followed up his debut season with the Bombers in 2018 with a solid 2019, finishing with 44 receptions for 543 yards and three touchdowns in 17 games, adding another 147 yards rushing and two scores on the ground. His 543 receiving yards ranked third on the Bombers, behind Kenny Lawler (637) and Darvin Adams (549).
Demski posted his first-ever 100-yard receiving game in a win in Ottawa in July, finishing with four catches for 105 yards and an 82-yard reception on the second offensive play of the game — the longest catch of his career.
Demski was especially dangerous in the Bombers playoff run in 2019. He had three rushes for 53 yards and a touchdown in the Western Semi-Final victory over the Calgary Stampeders, six catches for 72 yards in the Western Final win in Saskatchewan and then followed that up with four receptions for 45 yards and one rush for 22 yards in the Grey Cup victory over the Hamilton Tiger-Cats.
Demski signed a two-year contract extension to remain with the Bombers on January 5, 2021.

Demski returned to his hometown after signing a free-agent deal with the Bombers in February and became a productive part of Paul LaPolice’s offence. The University of Manitoba/Oak Park High School alum finished third in both receiving and rushing yardage for the Bombers in 2018, while also returning 26 kicks.
Demski finished with 59 receptions for 554 yards and three TDs, while adding 248 yards on 34 catches and another score. He also led the team in kickoff returns with 14 for 276 yards, while finishing second with 98 punt-return yards on 12 touches.

Dressed for nine games, starting six, before a broken foot in the Labour Day Classic ended his season… Finished 2017 with 19 receptions for 222 yards and one TD, scored against the Bombers on Canada Day… Had 14 receptions for 169 yards in the first two games of the season.

Solid rookie campaign after being selected in the first round by the RIders with 13 catches for 165 yards and six carries for 30 yards while making a big contribution on special teal teams, racking up 45 punt returns for 377 yards and a TD and returning 14 kickoffs for 284 yards… Posted career-best receiving totals in 2016 with 37 receptions for 338 yards and two TDs.

Starred at the University of Manitoba after his high school days with the Oak Park Raiders… Named a CIS Second-Team All-Canadian as a slotback in 2013, 2014 and a returner in 2011 and a CIS First-Team All-Canadian as a returner in 2012. He became the first Bisons player to be named on four CIS (now U Sports) all-star teams… Finished his career at the U of M ranked fourth in total touchdowns (21), seventh in receiving yards (1,577), fifth in kickoff-return yards (899) and fifth in punt-return yards (941).