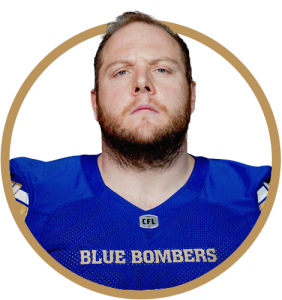 Thomas continues to be a steady and consistent presence in the middle of the Blue Bombers defensive front and his 10th season in the CFL — all in blue and gold — was testament to that.

In 2022, Thomas registered four quarterback sacks, one forced fumble and a fumble recovery. He has not missed a single game in the last five seasons and has missed just seven games in his entire career. Thomas has now registered 144 tackles and 26 sacks for the club since being drafted in 2012.

Thomas, the longest-serving current member of the Blue Bombers, signed a one-year extension to remain with the club on December 12, 2022.

Thomas appeared in all 14 regular-season games in ’21, finishing with 15 tackles and four sacks. Thomas then followed that up with a sack in both the Western Final and the Grey Cup, chipping in with four tackles in the championship game.
On January 5, 2022 Thomas signed a one-year extension with the Blue Bombers.

Thomas posted career-high totals in both tackles (22) and sacks (5) while appearing in all 18 regular-season games and three postseason contests.
As the longest-serving player on the Bomber roster, Thomas was the first to hoist the Grey Cup during the celebration following the victory over Hamilton.
Thomas signed a one-year contract extension to remain with the club on January 4, 2021.

After a late return to the club in May of 2018, Thomas dressed for all 18 regular season and two playoff games and recorded three sacks, 17 tackles and forced two fumbles.
Thomas signed a one-year contract extension on January 8, 2019.

Thomas put together his best statistical season as a Bomber, picking up 21 tackles, four sacks and recording his first career interception in 18 games with the Bombers.

Played in 16 games as a regular across the defensive line’s rotation. Made 16 defensive tackles and a pair of fumble recoveries as part of the club’s impressive +29 turnover ratio in 2016. Recorded two tackles and a quarterback sack in the West Semi-Final at BC. Had a streak of 62 consecutive games played end on September 5th, 2016.

Dressed in all 18 games for the second year in a row, recording 16 tackles, one sack and three tackles for a loss.

Stepped up with more playing time and began to flash his skills, with 20 tackles and four tackles in 18 games.

Thomas was drafted by the Bombers in the fourth round, 29th overall, in the 2012 CFL Draft and dressed for 13 games as a rookie. He finished the year with one tackle, but also forced a fumble in the dying seconds of a 23-22 win over Edmonton on July 26th.

Played in all 8 games in his final season with the Acadia Axemen and finished second in the AUS conference with nine sacks. Named to the AUS Conference All-Star Team and was also Second Team All-Canadian in 2010. Played for Team Canada at the 2011 IFAF World Championships in Austria.