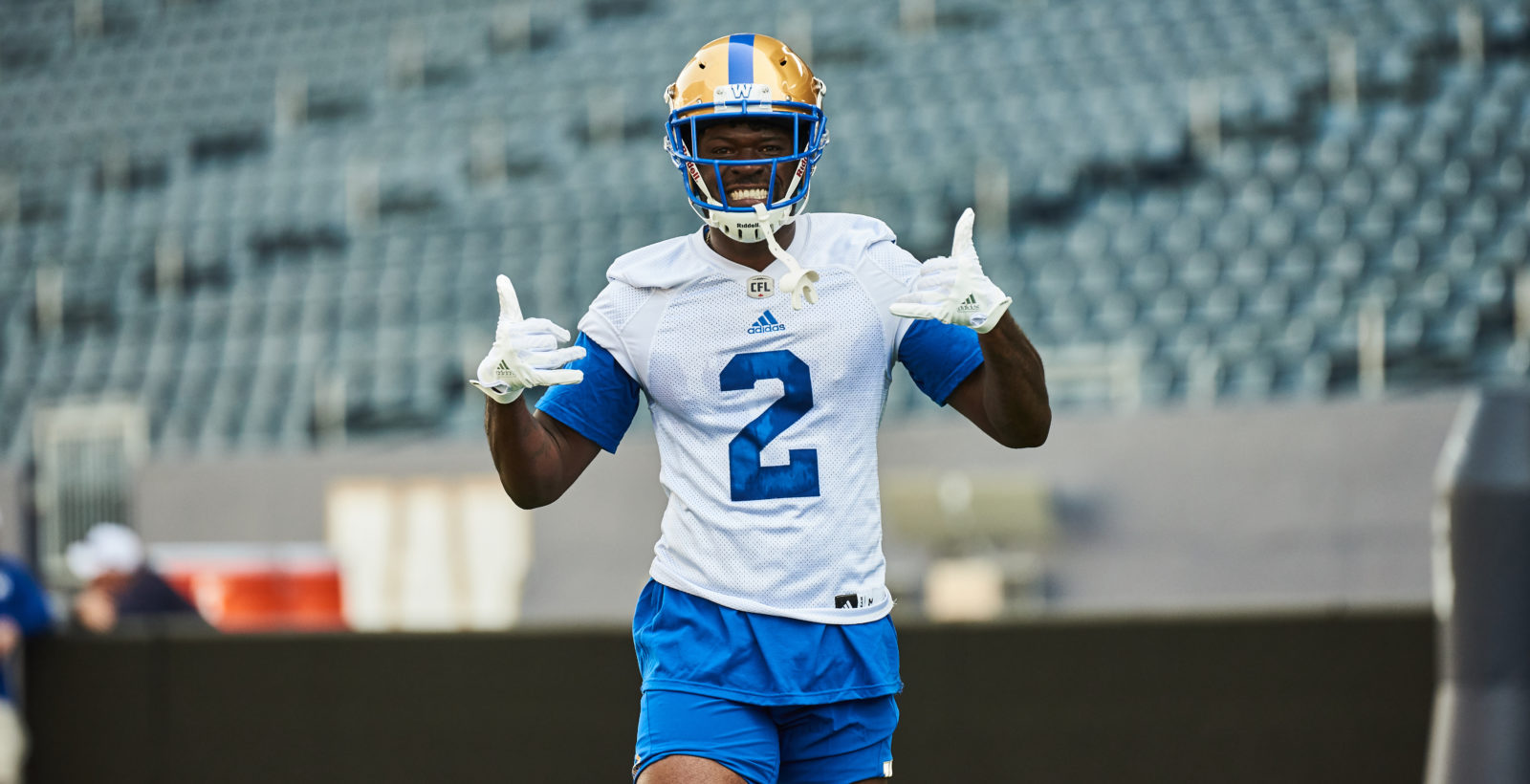 They parachute in all the time, landing across the Canadian Football League map after flights from the south.

They have glowing credentials, dotted with stops in ‘The League’, as those that have been there – or dreamed of being there – refer to the NFL.

And so, when the Winnipeg Blue Bombers announced the addition of two receivers with NFL experience Tuesday morning, the natural reaction from many was a simple shrug of the shoulders. After all, CFL rosters are filled with players who have had long and extensive looks in the NFL before heading north to Winnipeg, Vancouver, Montreal and all stops in between.

But upon closer examination, the numbers Kenbrell Thompkins and Rueben Randle posted down south make you stand up and take notice. Randle, for example, suited up for 64 games with the New York Giants from 2012-15, making 33 starts and pulling in 327 receptions for 2,644 yards and 20 TDs. In 2014 alone, he had 71 catches for 938 yards and three scores.

And Thompkins, meanwhile, appeared in 33 NFL games with New England, Oakland and the New York Jets, finishing with 70 receptions for 893 yards and four scores.

Now, their arrival has nothing to do with the talent Bombers already have in training camp at the import receiver spot – the club is set with veterans Weston Dressler, Darvin Adams, Adarius Bowman and Ryan Lankford while guys like Corey Washington, Myles White, Donteea Dye and A.J. Coney continue to impress. But Thompkins is a player the Bombers have had on their negotiation list for a while and Randle – released last September by the Chicago Bears – has been on their radar for much of this spring. 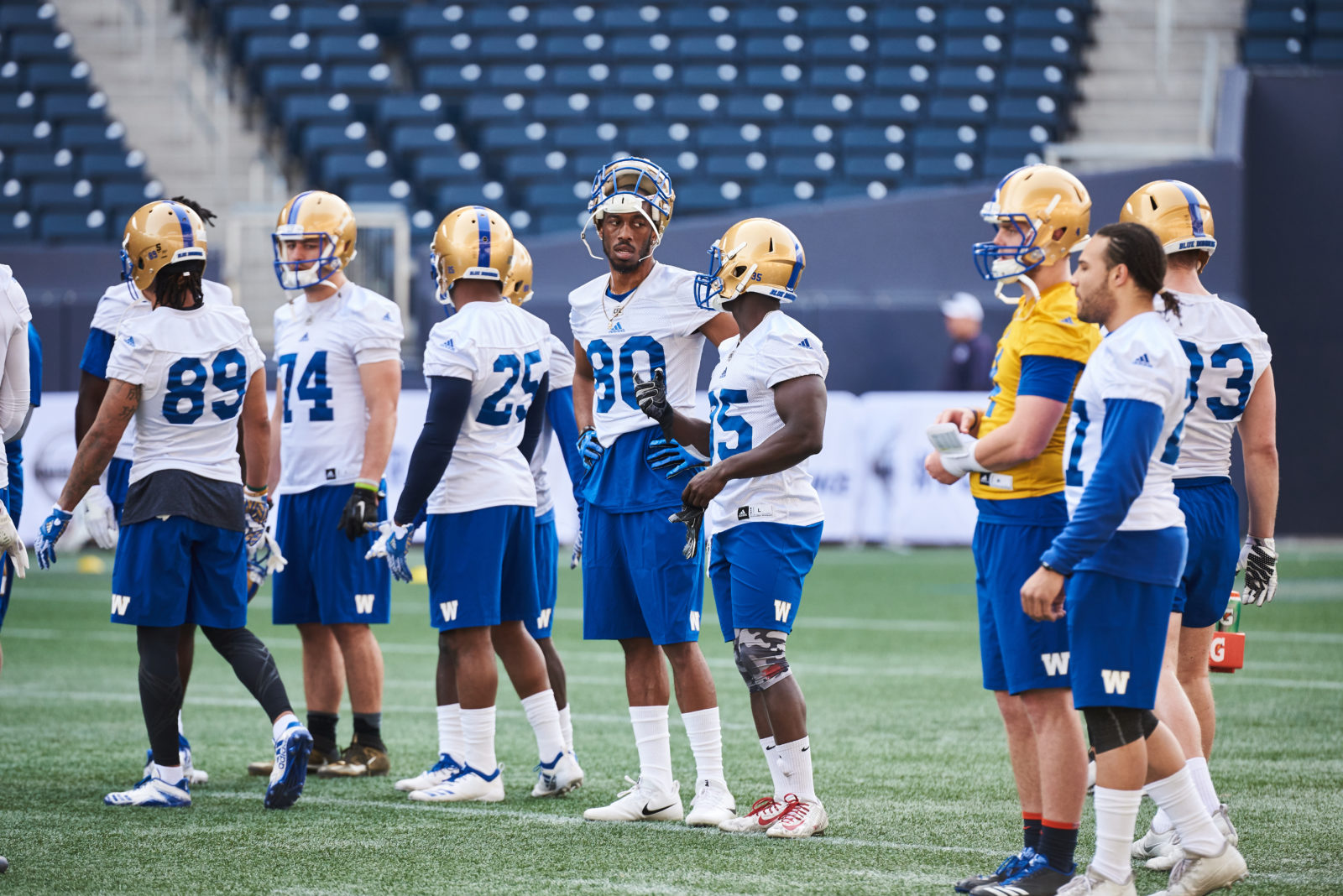 “They’re guys that we’ve been tracking for a while,” said Bombers head coach Mike O’Shea after practice on Tuesday. “They played some good, high-level football and are good size guys, too. They will feel a need for sure. We’ll see if we can get them up to speed quickly and see how they can compete.

“I think we’ve got a good group here, I really do. It’s interesting… just talking to a few (defensive backs) and they’re excited, too. It’s ‘Wooo-boy, we’ve got some good players in here that are working us hard.’ The way the CFL is set up, when you are tracking guys for two or three years and when you get a good player you’ve got to bring him in because you’ve been waiting. So, let’s see what these guys are all about. It’s certainly not a reflection of the guys we’ve got in here.

“They had one practice with basically no meeting time,” added O’Shea. “I like that they’re out there running around and that they were willing to do it. It’s a little tough to come off the plane, step on the field and not know really what you are supposed to be doing. They’ll get tuned up quickly. Obviously, they are professionals and they’ve had some time at other places. They’ll get it figured out pretty quickly.”

They’ll need to do just that if they want to make an impact. Whereas both Randle and Thompkins have sparkling resumes, they are behind right now in soaking up the little nuances of the CFL game – the wider field, the ‘Waggle’, the extra defender – compared to players like Washington, White and Coney, who have at least had the benefit of mini and rookie camps. 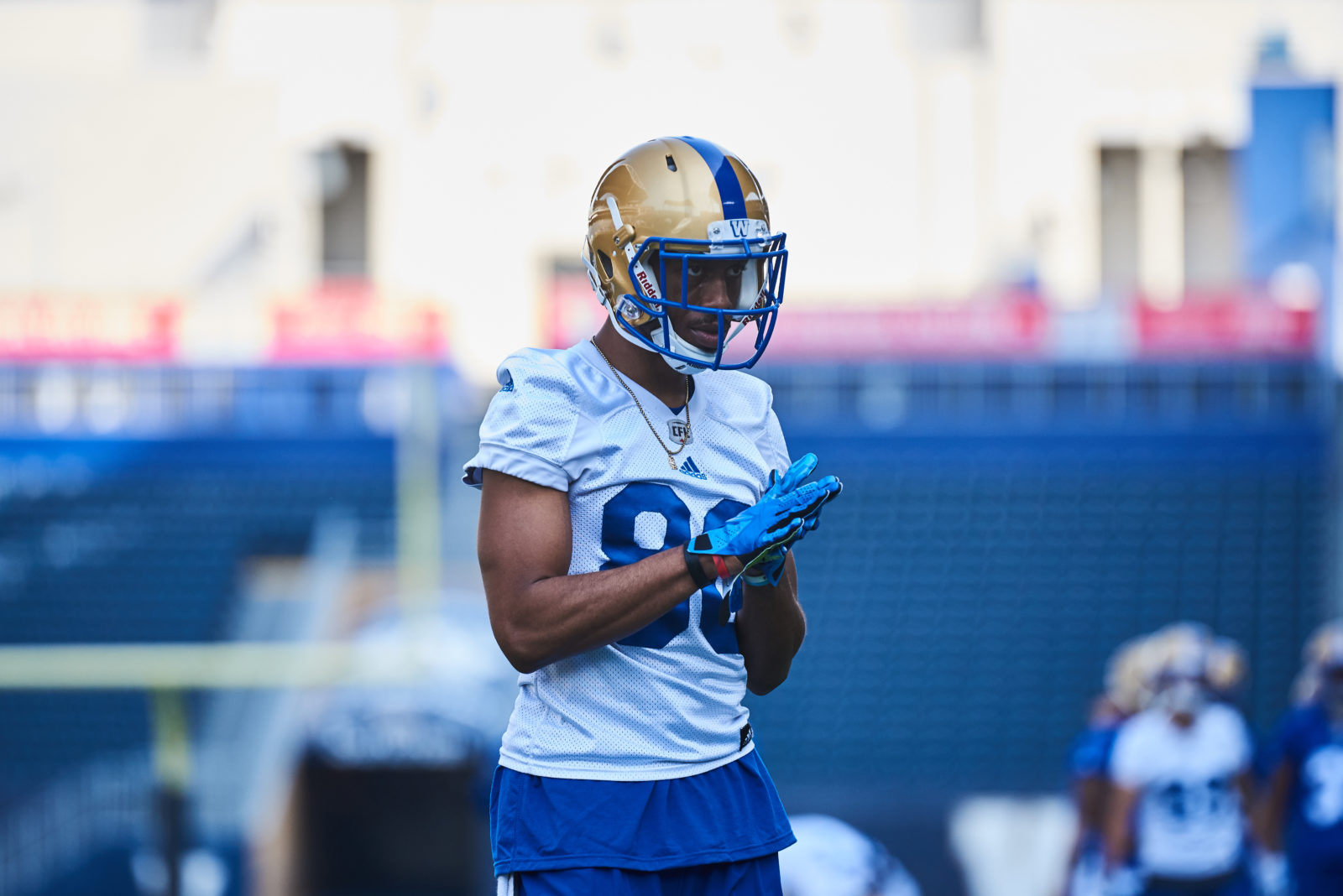 But the two men also appeared in a combined 97 NFL games – with a combined 50 starts – and that’s significantly more than an NFL training camp invite or snaps at the end of a preseason game.

“It’s just an opportunity to play football,” said Randle. “I’ve been out for a year or so with injuries. This was an opportunity to get back out here and get a feel for the game and show the skills and that I can continue to play.

“I just kept training and stayed with it. I didn’t give up on myself and knew I was still capable of playing the game. It’s been about battling through those injuries and keeping myself positive.”

Asked about what he knew about the CFL game, Randle was candid with his answer.

“Not much. I’ve watched a couple games, but I didn’t know the rules and I’ve never been to Canada and never really understood the game,” he said. “I’m looking forward to learning the game and getting a good feel for it.”

Thompkins, meanwhile, is good friends with Edmonton Eskimos receiver Vidal Hazelton. Both are products of the University of Cincinnati.

“I’ve watched him and paid close attention to him,” said Thompkins. “But as far as me learning the ins and outs of the game, I’m in the learning process of that right now.

“This would have been my second year waiting on a phone call (in the NFL). I’ve been training hard each and every day and when you’re training so much you want to get rewarded for what you’re training for. That’s what basically brings me here today… I’ve been working hard and haven’t got a phone call. I wanted to come here and show what I can bring to the CFL.” 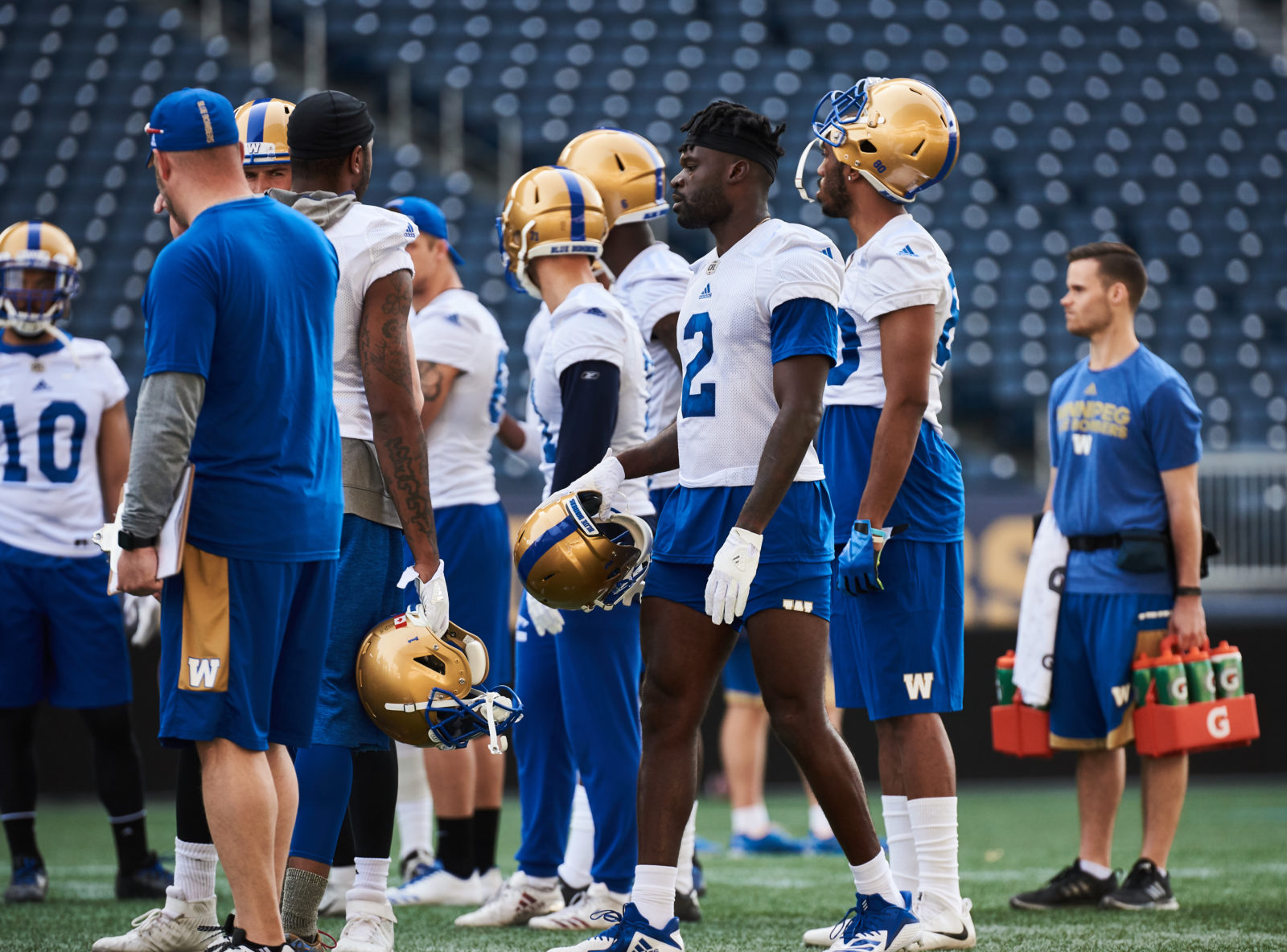 The Bombers brought back a familiar face on Tuesday, announcing after practice that veteran defensive tackle Jake Thomas would be returning to the club. A draft pick of the Bombers in 2012, Thomas has carved out a solid CFL career since then with 101 regular season games – all in blue and gold – to his credit. He is coming off a season in which he posted a career-high 21 tackles while adding four sacks and his first career interception.

Thomas, who had been a free agent, is one of those unheralded foot soldiers whose contributions aren’t lost by those in the locker room.

In addition to bringing aboard Thomas, Randle and Thompkins, the Bombers also signed defensive back Robert Priester.

Priester (5-9, 180, Wyoming) appeared in 35 games over three seasons at Wyoming, registering 103 tackles and three forced fumbles. He was part of a Cowboys squad that went 8-5 last season.

The club has also released International receiver Tony Stevens, who had been injured early in camp.

WR Tyrone Pierre, part of the club’s 2018 draft class, was on crutches Tuesday after pulling up lame following a reception on Monday. DT Ian Marouf, meanwhile, was carted off the field on Tuesday with an injury. Head coach Mike O’Shea did not have any updates post practice.

The first fight of Bomber camp featured veteran DE Tristan Okpalaugo and rookie OL Na’Ty Rodgers, who had to be separated after the dust-up.

O’Shea was asked for his thoughts on fighting in camp and whether it could be seen a positive because it can represent intensity or whether it was a negative.

“I don’t even pay attention to it, really,” he said. “As long as it ends quickly and doesn’t interrupt the flow of practice… we’ve got 80-something guys. So, 80-something minus two are trying to work. Get it over with it, get going, don’t let it carry over, don’t bring it into the locker room. If you want to add it all up, the answer is no, I don’t like that. It happens. It doesn’t bother me that it happens, just don’t let it keep going.”

STARS OF THE DAY: