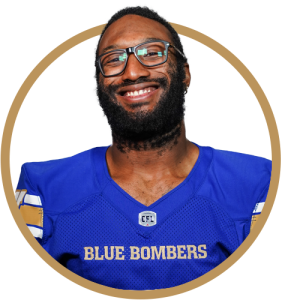 Alexander continues to be a dominant presence for the football club both in the secondary and in the locker room.
The veteran safety opted to remain in Winnipeg over the winer after injuring his knee in the 2021 Grey Cup victory to best take advantage of the his rehab. He returned to the lineup after his recovery for a game in Hamilton on September 17th and started five regular-season games as well as the Western Final and 109th Grey Cup while posting eight defensive tackles, one forced fumble and one fumble recovery.

Alexander had his best season in 2021 and was recognized by being named to both the CFL All-Star Team and the Canadian Football League Players’ Association All-Star Team. Alexander finished the season with 44 total tackles – 36 on defence and eight more on special teams – adding two interceptions and a forced fumble in his 13 games, all starts. He also added six more combined tackles in victories in the Western Final and 108thGrey Cup.
On February 11, 2022 Alexander signed a two-year contract to remain with the club.

Injuries limited Alexander to 10 games in 2019, all starts, but he continued to serve as a versatile and dynamic defender as well as a respected voice in the locker room. Alexander finished the year with 38 defensive tackles, four special-teams tackles, with four pass knockdowns and a fumble recovery. Missed eight games during a stretch from August 1-September 27 and when he returned, made the switch from defensive halfback to safety.
Alexander was particularly effective in the playoffs, with five tackles in the Western Semi-final win over Calgary, a forced fumble in the Western Final victory over Saskatchewan and then an interception in the first quarter of the Grey Cup win over Hamilton.
Alexander signed a one-year contract extension on January 11, 2021.

Alexander dressed for 14 games in 2018, all starts, and continued his transformation into an important part of the team’s defence. He finished with 36 tackles, three interceptions — tied for second on the club — while adding two forced fumbles, two fumble recoveries, four pass knock downs and five tackles for a loss.

The emerging force and now a veteran voice in the Bombers defence agreed to a new two-year contract on February 12th, 2019 that would keep him with the club through the 2020 season.

Made his CFL debut in the Bombers Canada Day win over Saskatchewan, finishing with five tackles and a tackle for loss… Finished the year with 52 tackles, including seven in two separate games – Sept. 30 at Edmonton and Oct. 21 at Toronto… Made his first career interception in the regular-season finale in Calgary on Nov. 3, returning it 56 yards for a touchdown… Was named the Bombers top rookie after finishing the year with 52 tackles, one quarterback pressure, two forced fumbles, four knockdowns, one tackle for a loss and one interception.

A walk-on at the University of Central Florida, earned a full scholarship in 2012… Was a member of the American Athletic Conference All-Academic Team in 2013… Twice nominated for the Burlsworth Trophy, awarded annually to the college football player who began his career as a walk-on player… Attended the Atlanta Falcons training camp in 2015.