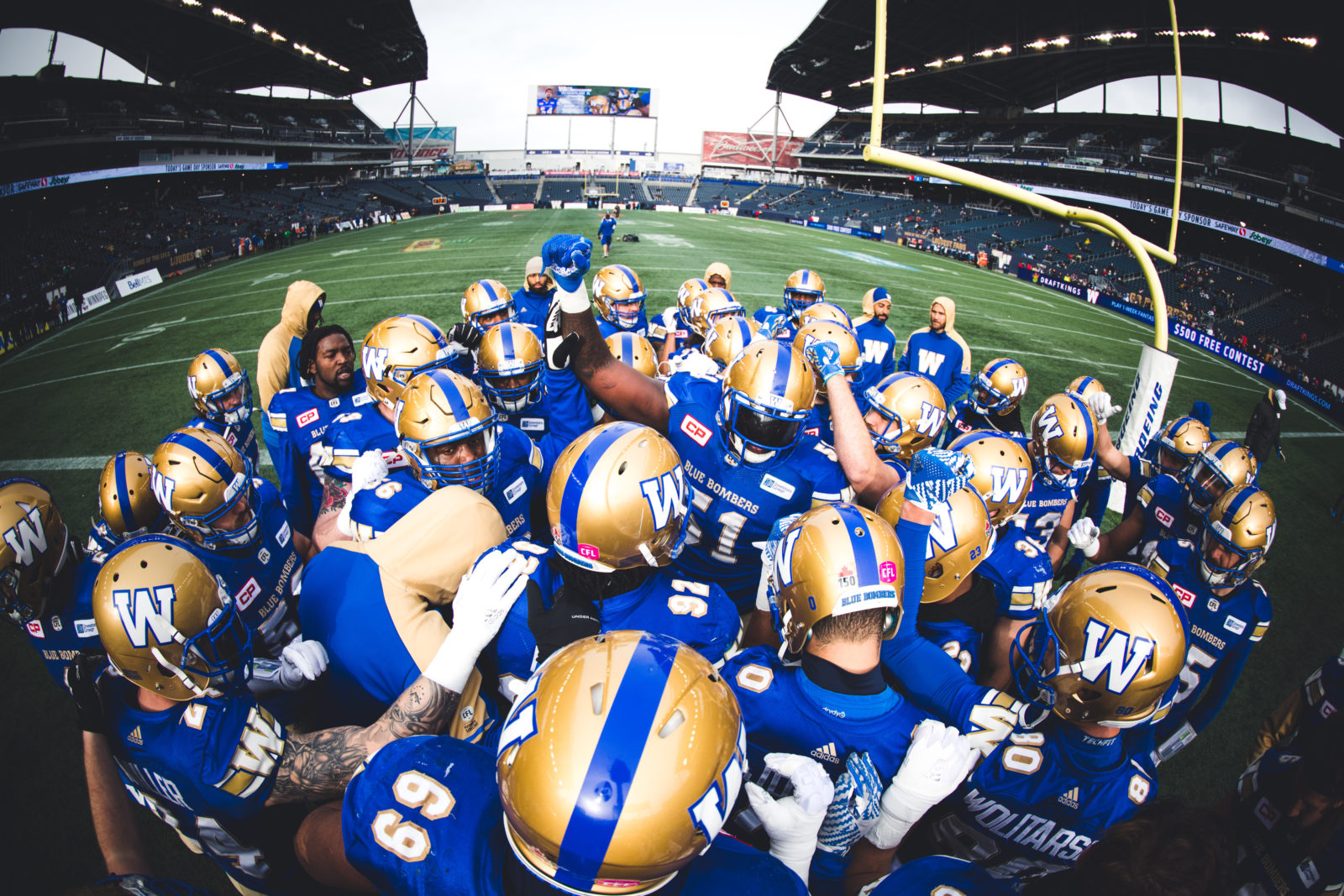 Players of the Winnipeg Blue Bombers before the game against the BC Lions at Investors Group Field in Winnipeg, MB, on Saturday, Oct. 28, 2017. (Photo: Johany Jutras)

The Winnipeg Blue Bombers earned their invitation to the Grey Cup playoffs weeks ago. Now the concern is who might still be able and upright to attend when the party actually starts.

The Bombers suffered a double – check that triple – whammy Saturday afternoon, falling 36-27 to the B.C. Lions AND watching nervously as both quarterback Matt Nichols and running back Andrew Harris exited the game due to injury.

Nichols looked to suffer a leg injury on a non-contact play on the Bombers’ second possession of the afternoon. He was just three of seven for 30 yards, but the Bombers were only trailing 7-6 at the time. He remained on the sidelines after being ruled out at halftime.

Harris, meanwhile, took a nasty shot to the head from Lions defensive back T.J Lee on a pass reception with less than five minutes remaining and had to be helped from the field. He did finish watching the afternoon’s final moments while seated on a stool in the tunnel leading up to the Bombers dressing room.

And afterward, he tweeted:

Your boy is all good! Thanks for all the love.. much appreciated! #Relentless #ForTheW

Asked if he would be able to play next week in Calgary, he added, “It’s too early now, but I don’t think it’s anything serious. We’ll have to look at it again tomorrow as we usually do and see what happens overnight.”

And on the status of Harris, O’Shea said his workhorse running back “should be fine.”

The loss dropped the Bombers to 11-6, and coupled with the Edmonton Eskimos 29-20 win over the Calgary Stampeders later Saturday night, means they will now have to win next Friday in Cowtown in order to secure the home playoff game OR have the Saskatchewan Roughriders knock off the Eskies in the regular season finale for both teams a day later.

Under that last scenario, the Bombers, Eskimos and Riders would all finish 11-7, but Winnipeg would secure the home playoff date after winning the season series against both their West Division rivals.

If the Bombers don’t take care of business or don’t get any help from the Riders, they will be on the road to Edmonton for the first round of the playoffs.

Regardless of what plays out next week, the concern now in Bomberland has to be that the recent slide has become more than just a blip. The Bombers lost consecutive games for the first time since September of 2016 and have now dropped three of their last four. 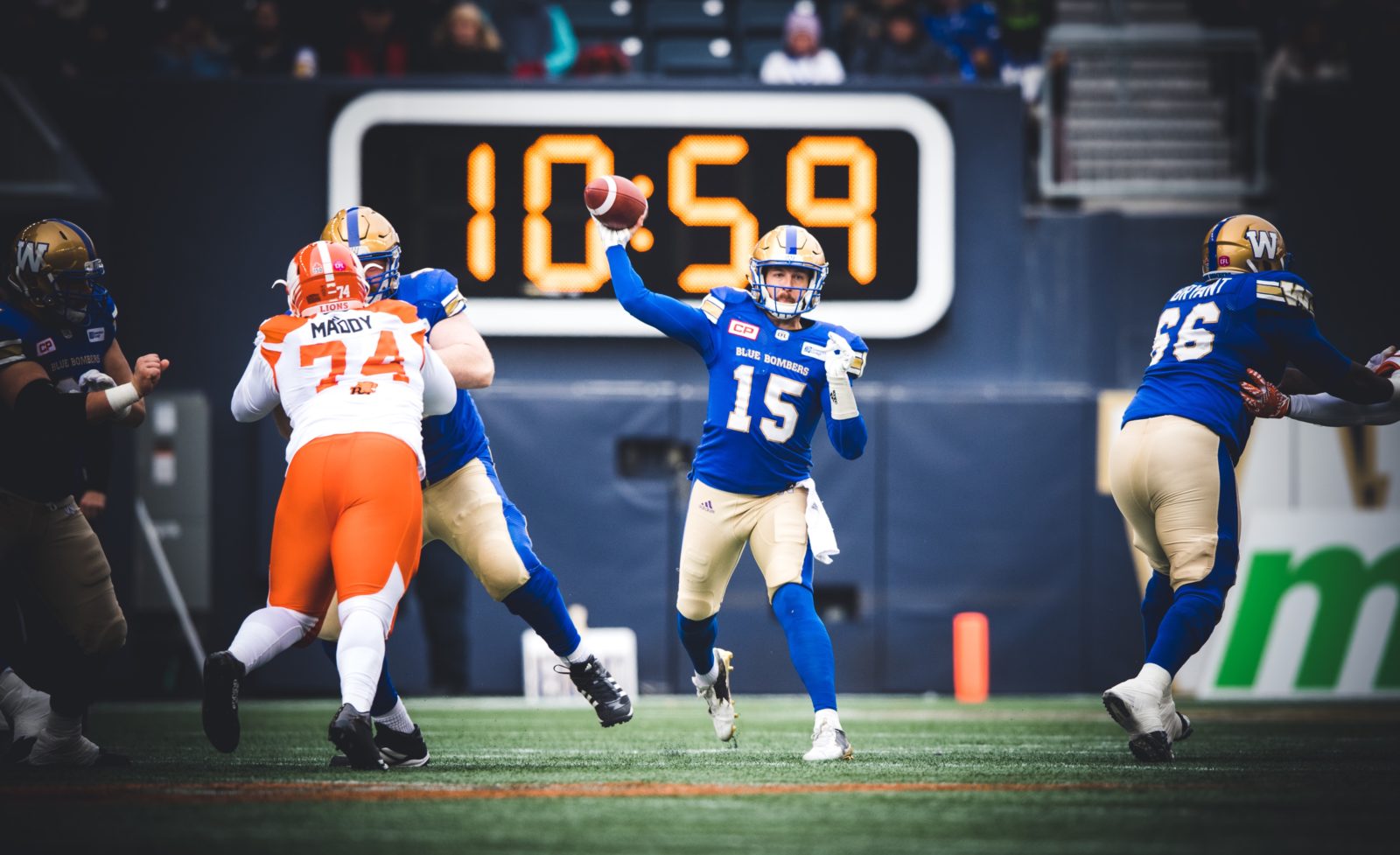 “It hurts (seeing the injuries), especially our leader (Nichols). Andrew is a leader, also. We depend on those guys so much, but we’ve got to learn to adapt when those guys are down. We’ve got to keep it going no matter what happens. We’ve got to get the win.

“It’s tough. I mean, that is a tough part of football,” said veteran receiver Weston Dressler. “Any time guys go down the initial reaction is I feel bad for them personally. And then you think about the team and the effects it has on the team. When there’s multiple guys, all-star type players that are going down, it hurts.

“But we have the talent and the guys in the locker room, even if they haven’t had as many reps or as much game-time action. They wouldn’t be here if they weren’t capable of playing in this league and playing at a high level.

“We’ve just got to keep grinding, keep working and get guys in the right spots an execute at a high level more consistently.” 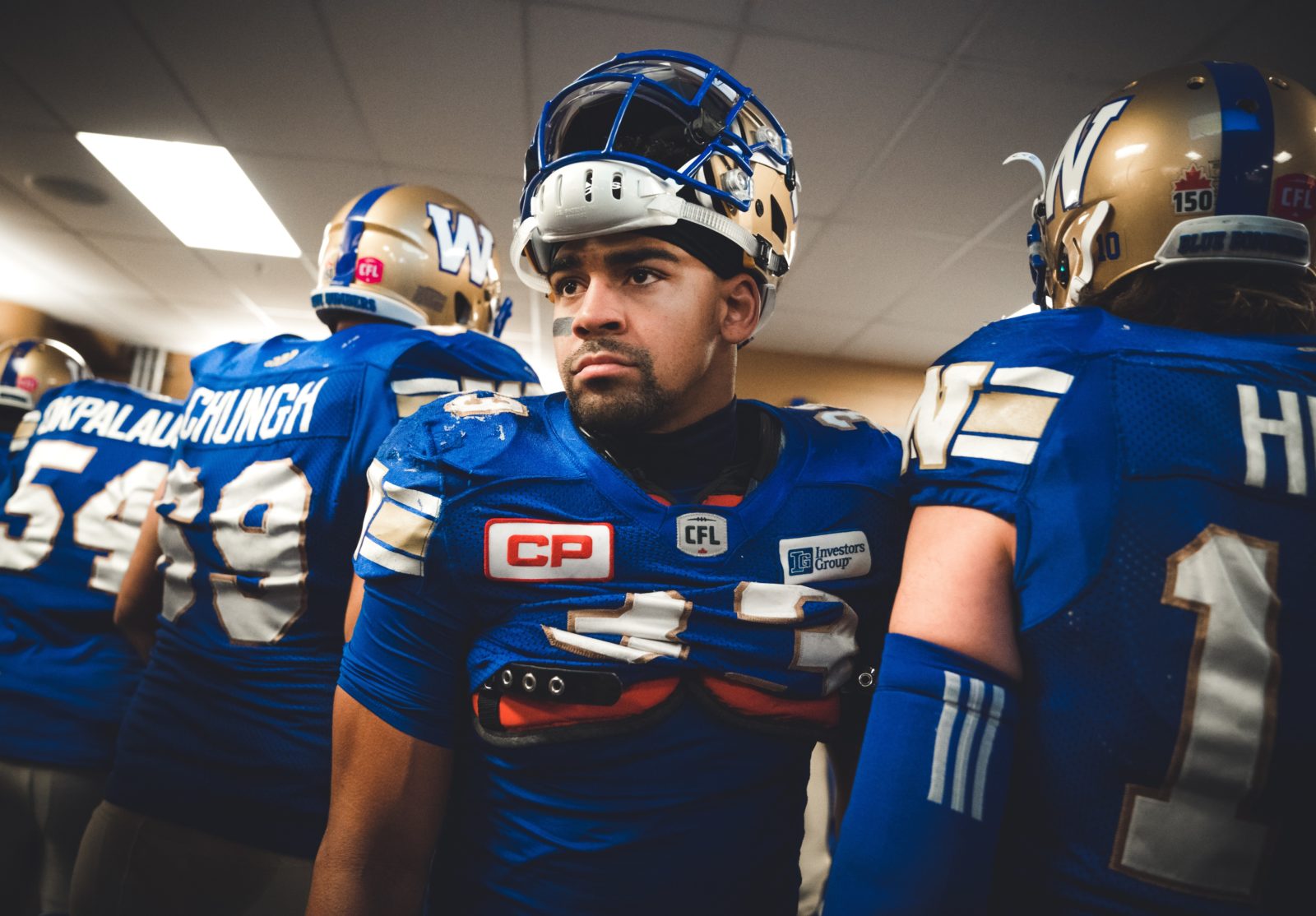 229: Net offensive yardage for the Bombers, compared to 489 for the Lions. Winnipeg held the ball for just 21 minutes and 37 seconds and did not get an offensive touchdown.

Bombers running back Andrew Harris was attempting to become the first player in CFL history to finish a season with 1,000 yards rushing and receiving, but that goal took a serious shot on Saturday.

He finished the day with 64 along the ground and only nine through the air. His season totals are now 967 yards rushing and 829 receiving.

1,045: Yardage surrendered by the Bombers defence in the last two games – 556 last week in Toronto and 489 Saturday against the Lions.

76:18: Combined time of possession for the Lions and Argos in the last two games.

43:42: Combined time of possession for the Bombers in the last two games.

6: Career punt blocks for Bombers special teams ace Derek Jones after he stuffed a Ty Long attempt in the second quarter, the loose ball scooped up by Mike Miller and returned 18 yards for a TD.

7: Justin Medlock connected on all seven of his field goal attempts, tying the club record he shares with Trevor Kennerd.

“The guys were running around and there was effort. The execution wasn’t at the level we needed. There were busts on defence, drops on offence, missed blocks… it wasn’t effort. It’s focus and execution.” – Mike O’Shea.