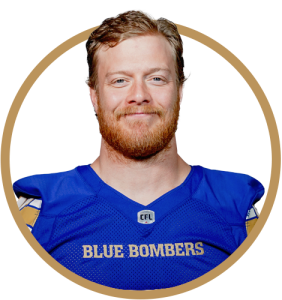 Miller stacked another solid season onto his superb Canadian Football League career in ’22, once again leading the Blue Bombers in special-teams tackles with 16 in 18 regular-season games while adding a forced fumble and registering four more tackles on specials in the playoffs.

Miller signed a one-year contract extension to remain with the club on January 19, 2023.

Miller’s 10th season was one of his best, as he cemented his place as one of the greatest special-teams players in the CFL history. Miller became the league’s all-time leader in special-teams tackles in a game in Toronto on August 21st, moving past Jason Arakgi, the long-time linebacker with the B.C. Lions.
He was named the Blue Bombers Most Outstanding Special Teams Player for a second-consecutive season, and was also selected to the West Division All-Star Team.
After leading the league with 25 special-teams tackles in the condensed 14-game schedule, Miller now has 210 in his career — 20 clear of Arakgi, who retired with 190.
On January 13th, 2022, Miller signed a one-year contract extension to remain with the Blue Bombers.

One of the most-respected and underrated players in the entire CFL, Miller earned some much overdue recognition during the 2019 season. Miller finished tied for first with Kerfalla Exumé for the club lead with 25 special-teams tackles, which also ranked second in the CFL (Toronto’s Frank Beltre had 27). Those totals allowed him to move past Bombers President and CEO Wade Miller into second place on the CFL’s all-time special-teams tackles list with 185.
Miller tied a CFL record with seven special-teams tackles in a win over Ottawa on July 5th. That record is now shared by seven players, including former Bomber Brendan Rogers, who first set the club record in 1994.
Miller was recognized as the team’s Most Outstanding Canadian and Special-Teams Player, a career first in both categories, and earned a spot on the West Division All-Star Team. He was also the West Division nominee for the John Agro Award as the CFL’s Most Outstanding Special Teams Player, finishing as the runner-up to Hamilton’s Frankie Williams.
Miller signed a one-year contract extension to remain with the club on January 7, 2021.

Joined the Bombers as a free agent after spending the first six years of his CFL career with the Edmonton Eskimos. Dressed for all 18 games and led the team with 22 tackles on special teams, ranking sixth in the CFL. Scored his first career touchdown against the B.C. Lions on October 28th after scooping up a punt block. Also recovered an onside field-goal attempt in B.C. on July 21st that led to a TD.

Established himself as one of the CFL’s best special-teams tacklers during his days with the the Esks… Led the CFL with 27 tackles on special teams in 2016… Also spent time as a starter in the Eskimos’ backfield blocking and making the occasional catch (three for 20 yards)… A member of the 2015 Eskimos Grey Cup championship team… Originally signed as an undrafted free agent on May 18, 2011.

Spent four years with the Acadia Axemen, finishing with 133 defensive tackles, third all-time in school history… Was a Second-Team CIS All-Canadian and AUS All-Star in 2009.