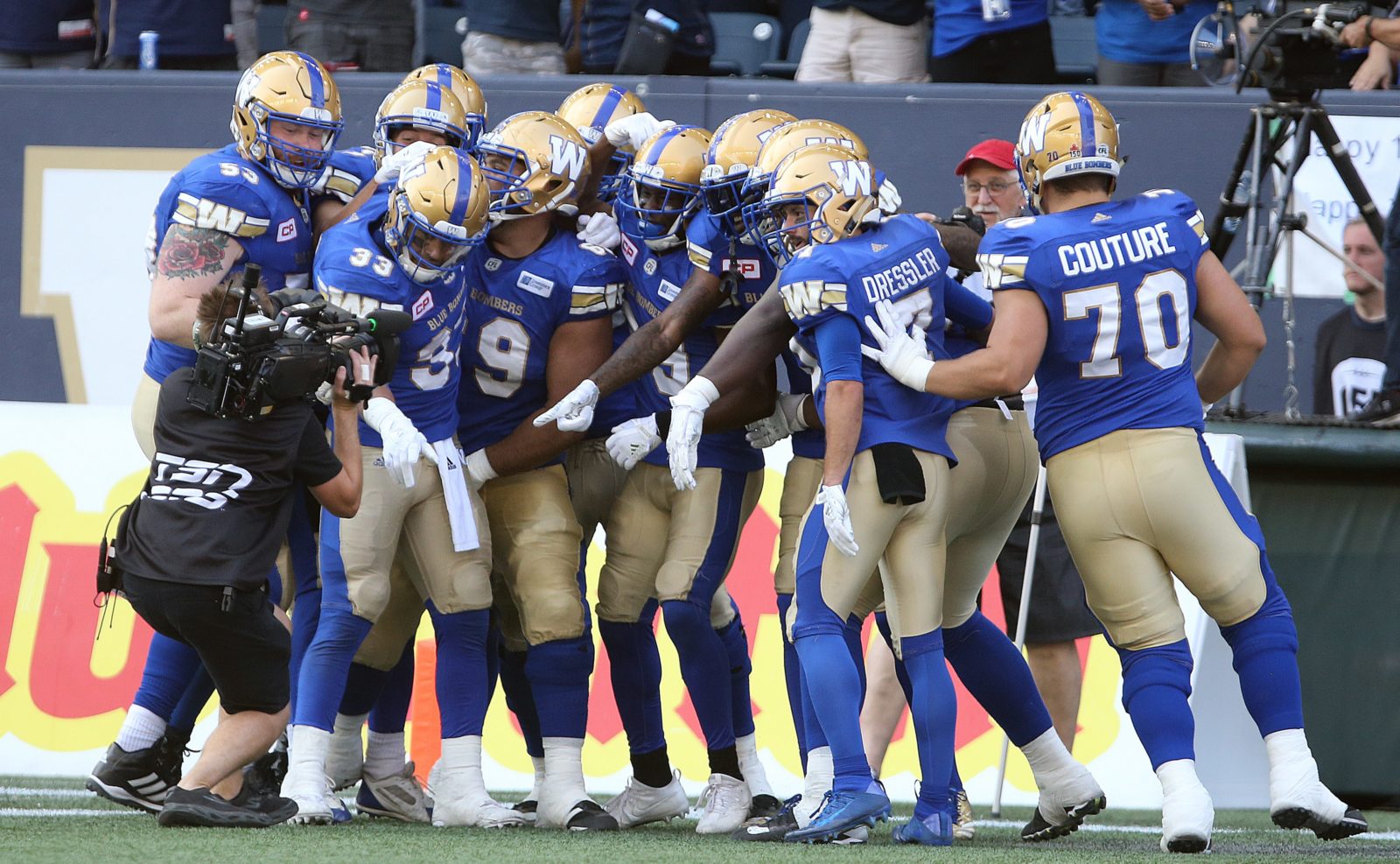 If there was such a thing as a Banjo Bowl ‘To-Do’ list, the Winnipeg Blue Bombers checked off a good chunk of the items Saturday afternoon.

Yes, in knocking off the Saskatchewan Roughriders 48-28 in front of a raucous sold-out crowd at Investors Group Field, the Bombers not only improved to 8-3, but have captured the season series with their archrivals 2-1.

In addition, the Bombers:

We’re not making this stuff up, people.

“That was certainly more like it,” said Bombers head coach Mike O’Shea. “If you want to go back to last week, we had five minutes where we gave up three scores and it was tough to climb out of.

“This was a good win and I believe – and the players believe – more indicative of how we’re going to play football.” 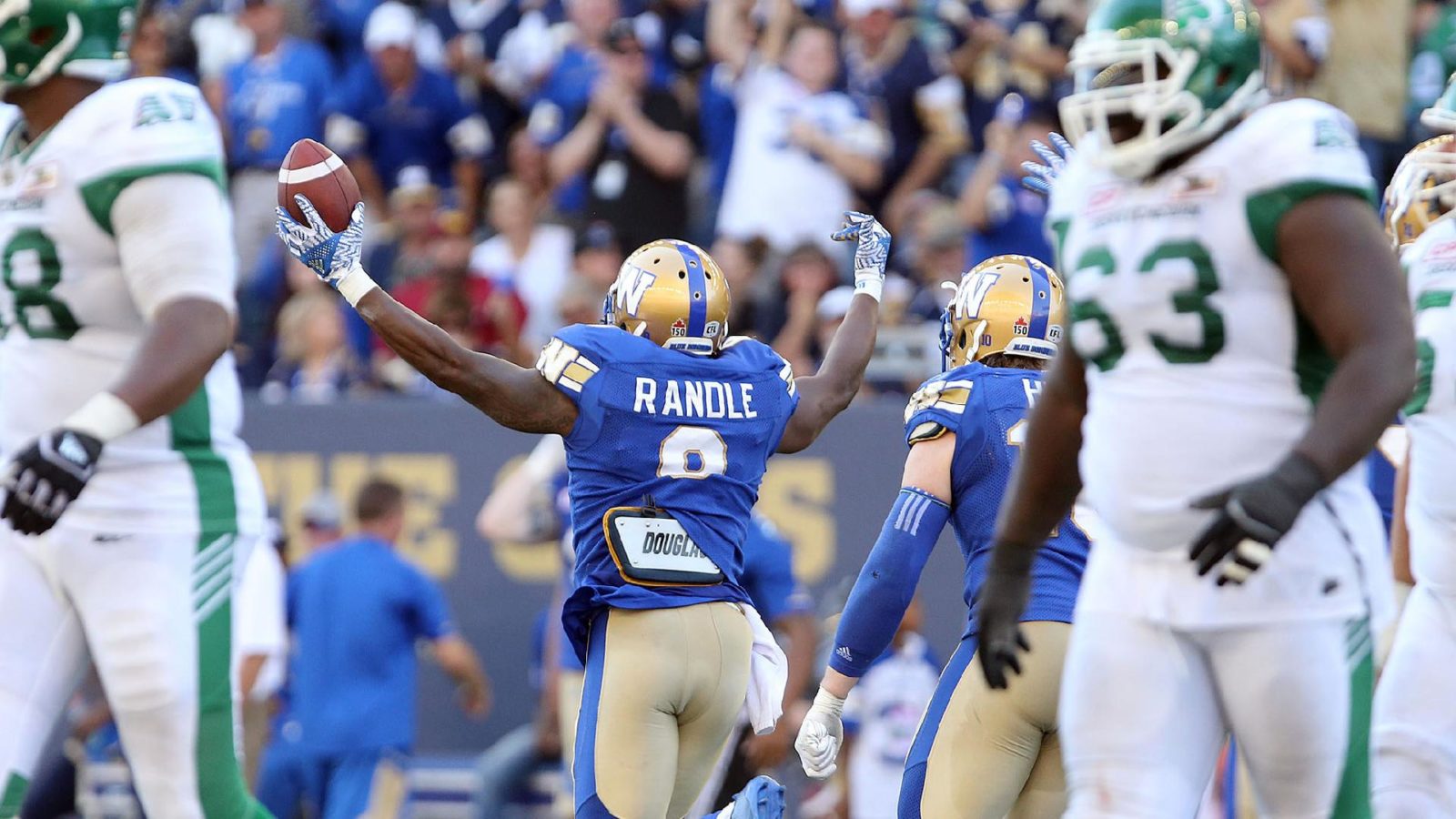 Now, there’s a way to over-analyze thing, to breakdown the numbers – the first-down production, the explosion plays against, etc. etc. – but the simplest take is this: The Bombers got socked in the lips last week in Regina. And Saturday afternoon in the Banjo Bowl, they got up off the mat and landed a few jabs of their own.

“When we get hit in the mouth we just hit harder back,” said Leggett, who was sensational in the victory. “That’s what we preach in the locker room. It doesn’t matter what happens out there, we just stay together. And if you throw a blow at us, we’re going to throw one harder back.”

Nichols completed 24 of 37 passes for 282 yards with two TD strikes to Clarence Denmark and a third to Ryan Lankford; Leggett had his two scores, Dan LeFevour scrambled for a major, and Justin Medlock hit one field goal and had three singles to account for the 48 points – Winnipeg’s highest point total of the season and highest since throwing up 49 in a win over Hamilton in July of 2010.

“That was big,” said Nichols. “A lot of this game is how you respond to situations and in an 18-game season, you’re going to have some down points. I felt like last week was a little bit of a down point for us… all three phases struggled at times.

“The guys took that challenge. We knew we had to come back and play well in front of our home crowd and get some momentum back, especially going into a bye week, and we did exactly that.

“We got back to playing our brand of physical, tough football, clean football. We didn’t make too many mistakes tonight and guys were making plays all over the field. Absolutely it was a big night for us.”

The Bombers and Riders traded punches early, with Nichols teaming up with Denmark for a 12-yard TD to open the scoring and Saskatchewan answering with a 88-yard Kevin Glenn-to-Duron Carter bomb. Leggett did his thing on the punt-return score, but again the Riders responded in one play when Glenn and Naaman Roosevelt teamed up on a 75-yard score.

But from that point on, the Bombers out-scored the Riders 33-15 en route to their eighth win.

“This is a great game to remember,” said Leggett. “This is the first game my mom (Kelley) has actually seen me play in Canada. It’s a pretty great thing to remember.

“We still left some plays out there. We know we’re not perfect but that’s what we’re striving for.”

“It was crazy,” said Denmark of the whole Banjo Bowl environment. “It’s always fun to play in front of our home crowd because they’re always into the game. We knew it was going to be tough, but it was all about us and what we decided to do from the beginning of the game. 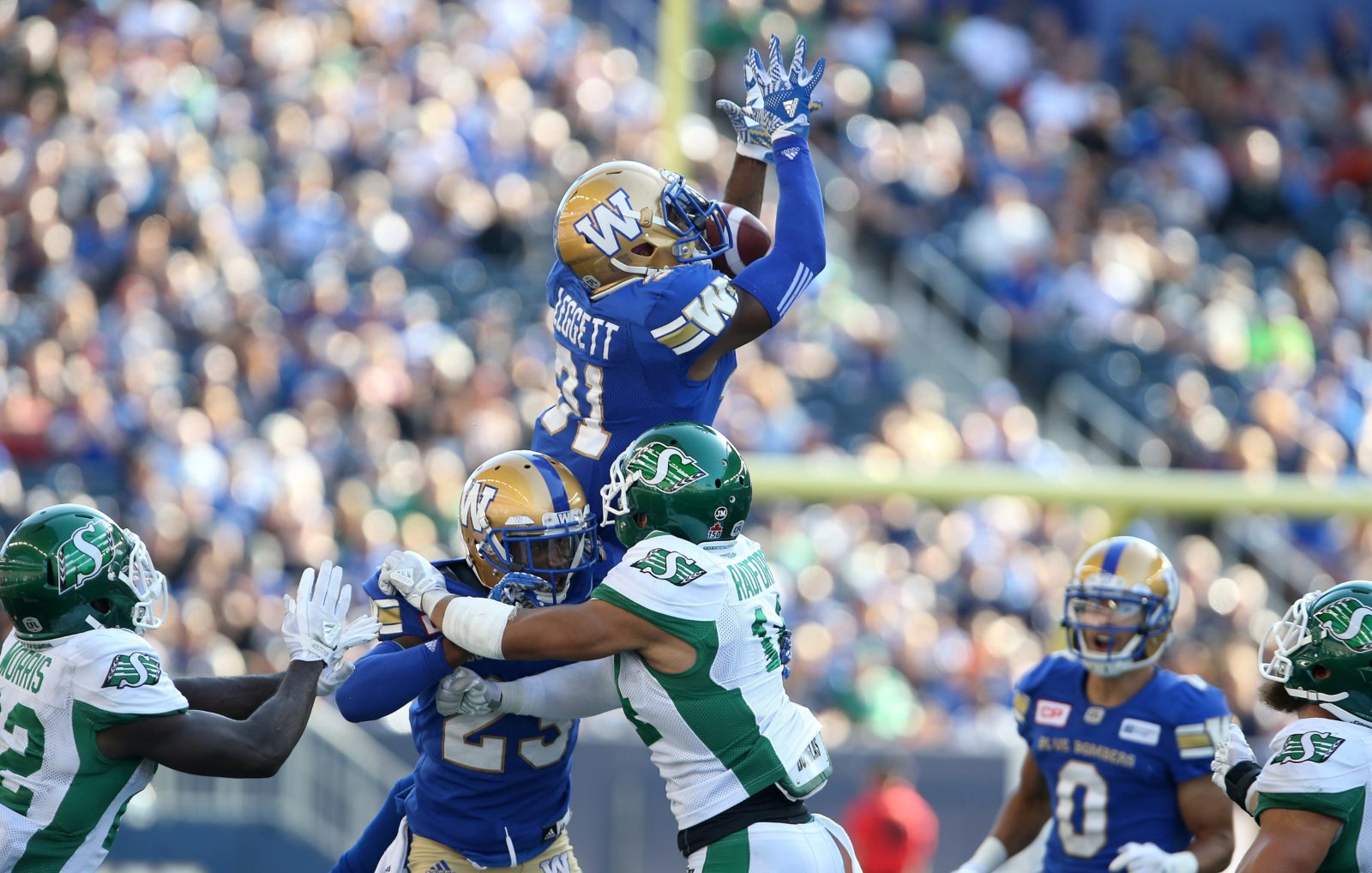 4-1-1:  Touchdowns scored by the offence, the defence and the special teams of the Bombers: three through the air and one along the ground offensively, with Moe Leggett adding one on an interception return AND on a punt return.

The Bombers announced a late scratch before the game with safety Taylor Loffler moved to the one-game injured list due to illness. Head coach Mike O’Shea said Loffler should be good to go when the club returns from the bye week to face Ottawa on September 22nd. Derek Jones started in Loffler’s place and finished with four tackles, while newcomer Kahlen Branning, a Canadian DB just added to the practice roster, was activated and dressed for his first game.

274: Yards passing for Kevin Glenn at halftime, including TD strikes of 88 and 75 yards to Duron Carter and Naaman Roosevelt. Glenn finished with 327 yards and was picked off twice before having to leave the game in the third quarter after hitting his throwing hand on Bombers defensive tackle Cory Johnson

97: The length of Moe Leggett’s punt-return TD, the longest in Bombers history. Dexter Dawson and Eric Blount had shared the record for the longest previously, at 92 yards.

3: Quarterback sacks by the Bombers – two by Jackson Jeffcoat, one by Jamaal Westerman.

The Bombers are now 8-6 in the 14 year history of the Banjo Bowl after winning their third straight, with Nichols at the controls of all three victories.