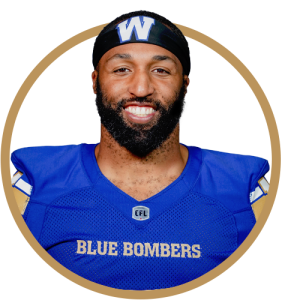 Jeffcoat missed six regular-season games due to injury, but was still a force when in the lineup. He managed to finish the 2022 campaign with four quarterback sacks, 20 defensive tackles, one interception along with a forced fumble and fumble recovery.
He was especially effective in the playoffs with a sack in each of the Western Final and Grey Cup games, adding a forced fumble in the championship loss to the Toronto Argonauts.
Jeffcoat now has 30 sacks and 126 tackles in 64 regular season games with the Blue Bombers. His 30 sacks ranks 11th on the club’s all-time list, just two back of Paul Randolph, who is in 10th spot with 32.
Jeffcoat signed a one-year contract extension to remain with the club on January 17, 2023.

Jeffcoat enjoyed a superb season in 2021, earning berths on the West Division and CFL All-Star Teams for the first time in his career while helping the Blue Bombers capture a second Grey Cup after also winning in 2019.
Jeffcoat racked up a career-best nine quarterback sacks this past season to lead the club in that department, while forcing a league-best four fumbles and adding 26 tackles — six behind the line of scrimmage — and also registering two pass knockdowns.
He then added two more tackles, a sack and a forced fumble in the Bombers two playoff games, including the 108th Grey Cup victory in Hamilton.
On January 7, 2022 Jeffcoat signed a one-year contract extension to remain with the Blue Bombers.

A six-game stint on the injured list in late August/early September meant that Jeffcoat missed a third of the season, but the veteran defensive end was still productive and then dominant in the playoffs. Jeffcoat had five sacks, two forced fumbles, three pass knockdowns and a tackle for a loss in the regular season. He was part of a stifling defensive effort in the 107th Grey Cup win, registering four tackles, two sacks and a forced fumble in the win over Hamilton.
Jeffcoat signed a one-year contract extension on January 8, 2021.

Jeffcoat appeared in 12 games in 2018, missing six games due to injury, but still managed to record five sacks, two forced fumbles and 21 defensive tackles. He was injured in the Labour Day Classic in Regina on September 2nd, and spent the next six weeks on injured-reserve before returning as a designated import for the final two weeks of the regular season. He was back to his dominant ways in the playoffs, registering two sacks in each of the club’s postseason games — the West Semi-Final win in Saskatchewan and the West Final loss in Calgary.
Jeffcoat signed a two-year extension with the Bombers on January 21, 2019.

Jeffcoat dressed for 16 games as a CFL rookie, all starts and tied with with Jamaal Westerman for the team lead in quarterback sacks with seven. He led all Bombers defensive linemen in defensive plays with 77 – 36 tackles, three tackles on special teams, seven sacks, 23 quarterback pressures, one forced fumble, one interception, two pass knockdowns, one fumble recovery and three tackles for loss. His 23 QB pressures ranked fifth in the CFL. Jeffcoat posted a season-high four pressures on October 14 vs. B.C. and three pressures on two occasions – August 4 at Ottawa and August 12 in Hamilton. In the regular-season finale in Calgary he registered four tackles, two sacks and two pressures.

Played his college ball at Texas and in 2013, his senior season, was a Consensus All-American, the Big 12 Conference Defensive Player of the Year and a First Team All-Big 12. Jeffcoat is the son of Dallas Cowboys legend Jim Jeffcoat.

Entered the NFL in 2014 as an undrafted free agent with the Seattle Seahawks. Joined the Washington Redskins in September of 2014 and promoted to the active roster in October. Appeared in nine games, making one start, over the 2014-15 seasons with Washington and registered one sack, one interception and four tackles. Joined the Cleveland Browns in 2016, but did not see any action.