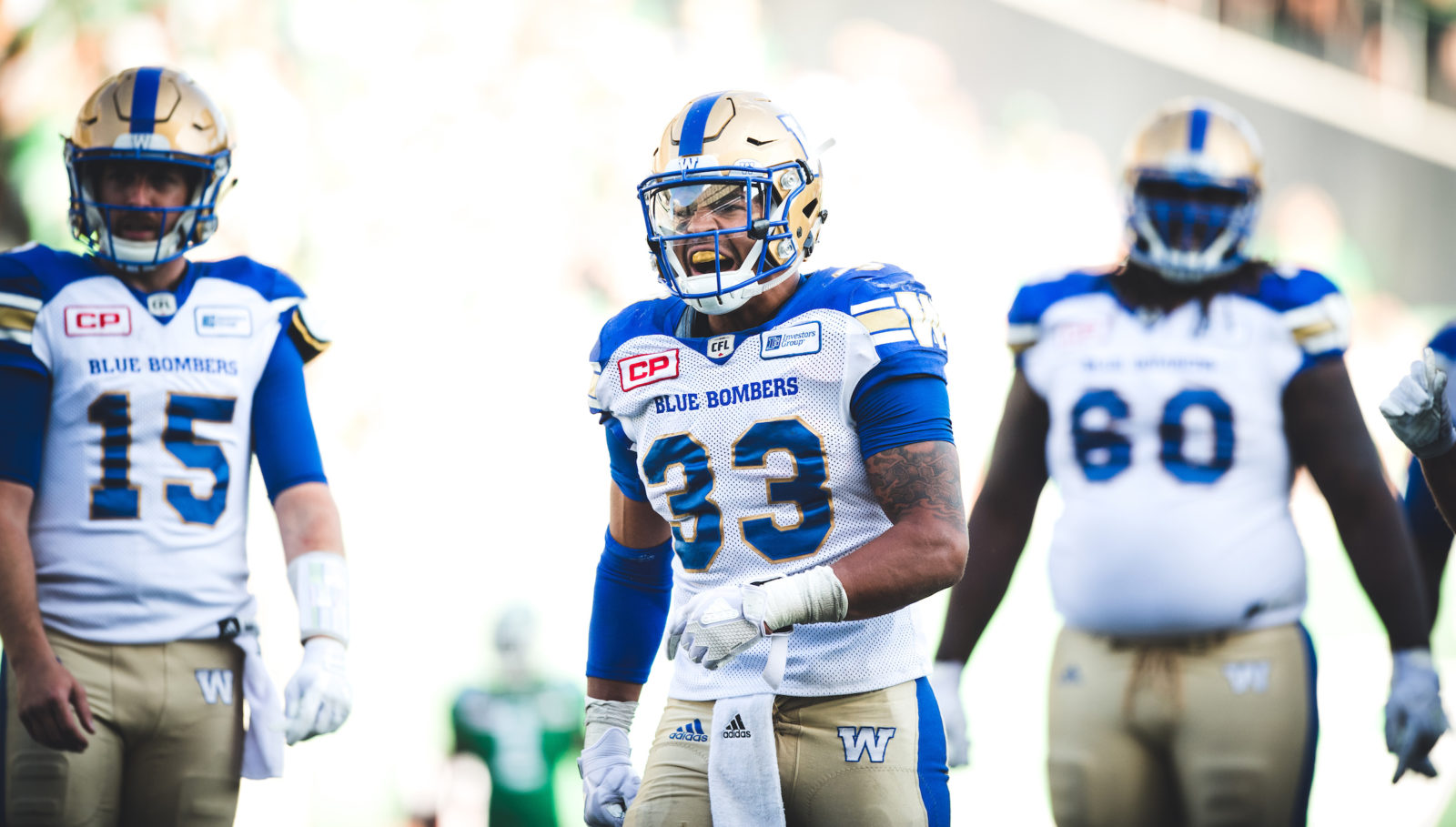 REGINA – It was part street fight, part track meet. And the Winnipeg Blue Bombers, for the first time in 44 days, exited a game with a collective busted lip and a bad case of windburn after finishing second in both.

The Bombers had a five-game win streak that dated back to July 21st snapped in the annual Labour Day Classic at new Mosaic Stadium Sunday afternoon, falling 38-24 to the archrival Saskatchewan Roughriders.

The loss drops the Bombers to 7-3, while the Riders improved to 5-4 with their third-straight win. And it all sets up what should be a dandy rematch in next Saturday’s sold-out Banjo Bowl at Investors Group Field.

“As a whole we just didn’t play good enough today, all units,” said Clarence Denmark. “Everybody took their turns today, including myself, making mistakes.”

“We respect everybody we play, but when we watch this film… it’s going to be tough to watch some of these plays.” 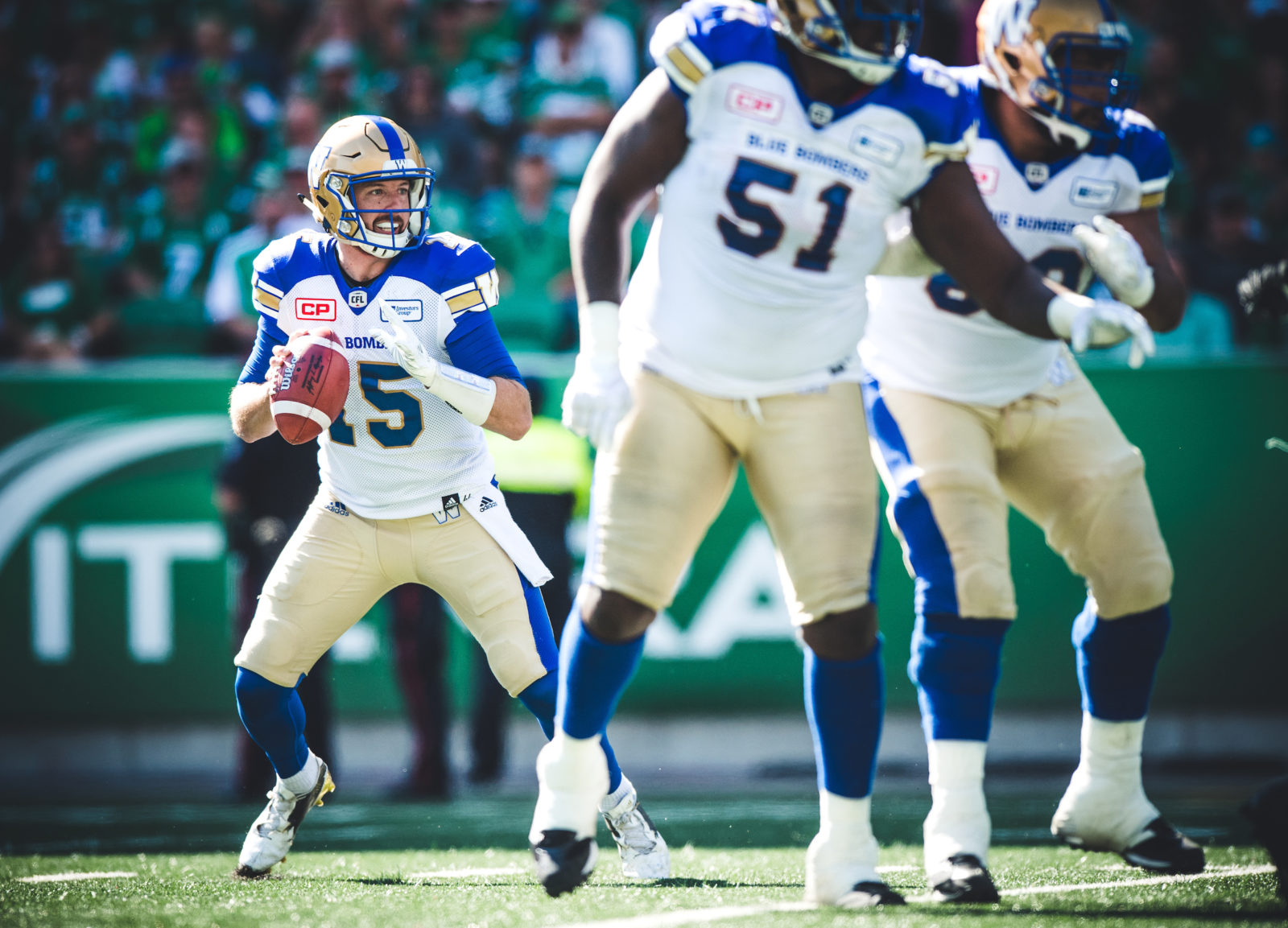 The 54th edition of the Labour Day Classic began inauspiciously enough, with the two clubs trading field goals on each of their first possessions. And that’s when the Bombers suffered through arguably their ugliest stretch of the season as the Riders scored three touchdowns in a span of 10 minutes on a 53-yard Kevin-Glenn-to-Naaman Roosevelt score, a one-yard TD run by Vernon Adams after Matt Nichols had a pass intercepted by Ed Gainey and returned to the Winnipeg four-yard line, and a nine-yard Glenn-to-Rob-Bagg TD that put the home side up 24-3.

That series of punches wobbled the Bombers and they spent the rest of the afternoon trying to find their legs again, pulling to within 24-13 after a Timothy Flanders 13-yard score from Nichols and a Justin Medlock field goal, but trailed 34-16 at the intermission following a Glenn and Duron Curter TD hook-up that covered 17 yards.

The offence struggled with three straight two-and-out possessions to start the second half, but did rally to keep fans in their seats and beer sales soaring with a couple of late pushes.

The Bombers got to within a couple of scores, but also had a third-down-gamble from the Riders’ six-yard line early in the fourth fall short and had an interception in the end zone with 2:23 remaining that snuffed out any possible comeback.

The Bombers finished with 400 yards net offence but were frustrated with their inability to run their hurry-up offence. The Riders appeared to suffer through a rash of cramps and other injuries and the stoppage in play prevented the Bombers from staying on the attack.

Asked about it afterward, Nichols said “I think it was pretty easy to see what was happening.”

All that said, the Riders deserve full credit for their performance. Glenn was sensational, throwing for 386 yards and three TDs as three Saskatchewan receivers – Bakari Grant, Carter and Naaman Roosevelt – all cracked the 100-yard mark.

The result ends a four-game Bombers win streak against the Riders and drops their Labour Day Classic record to 19-35, including a 4-14 stretch since 2000.

Now the key is how they regroup for next Saturday.

“This is a close team,” said defensive end Jamaal Westerman. “Yeah it sucks to lose. We’re disappointed we came out and didn’t start fast. We finished a bit better, but it was nowhere close enough to get the ‘W.’

“We have to play cleaner and start faster from the handshake. That’s what Osh (Mike O’Shea) always preaches and we didn’t do that.” 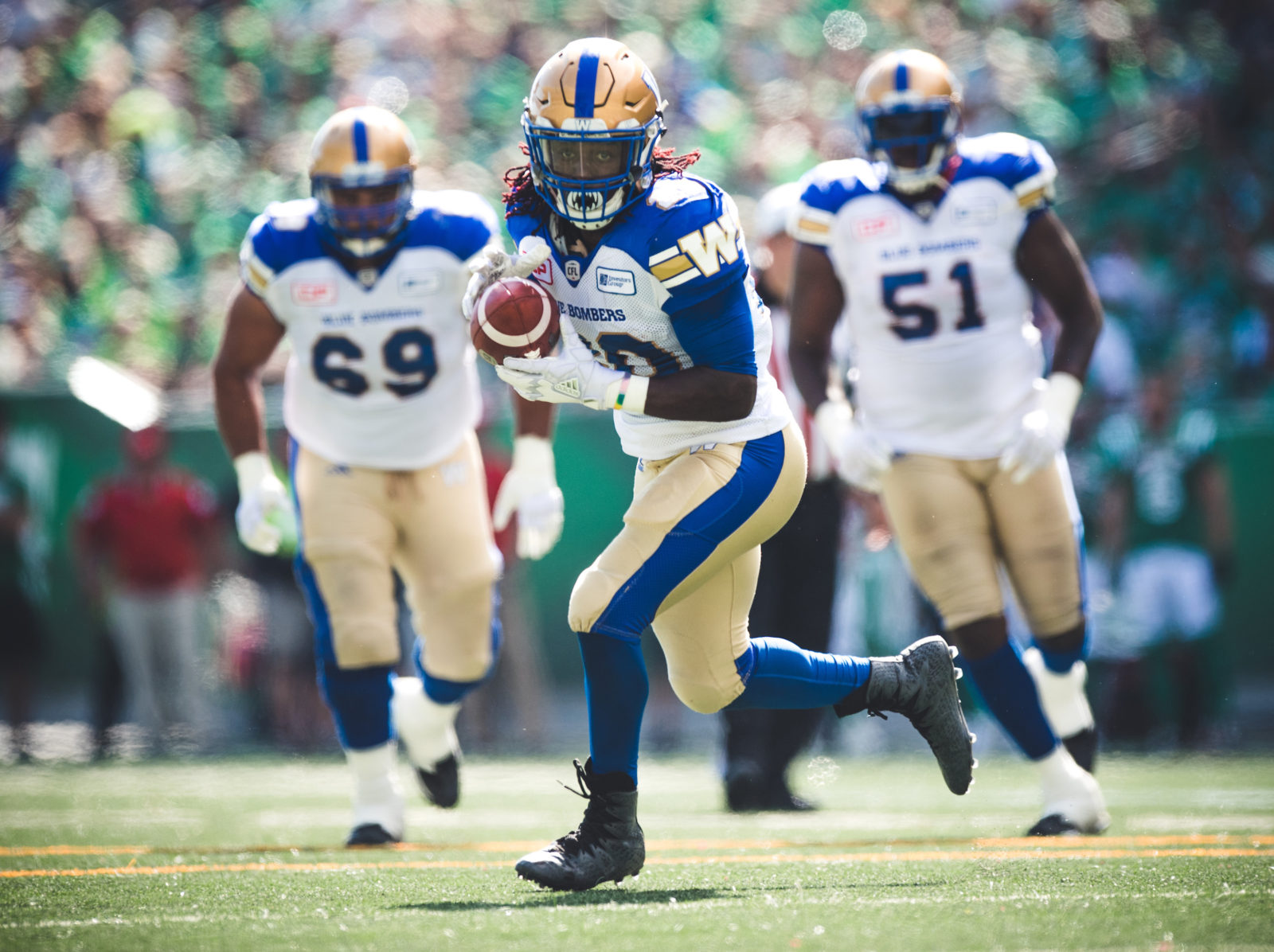 4: Turnovers by the Bombers – two interceptions by Nichols, a turnover on downs and a Kevin Fogg fumble on punt return inside the final two minutes.

Bombers running back Andrew Harris is attempting to become the first player in CFL history to finish a season with 1,000 yards rushing and receiving. He finished the afternoon with 29 along the ground and 72 through the air, boosting his season totals to 599 yards rushing and 562 receiving.

The LDC took its toll on both clubs physically. The Bombers lost linebacker Kyle Knox to an undisclosed injury and he was replaced by Jesse Briggs for the rest of the game. T.J. Heath and Taylor Loffler also missed stretches with injuries, but did return to action. Mike O’Shea did not have a status report on Knox after the game.

4-1: The Riders record at new Mosaic Stadium – the lone blemish the 43-40 loss to the Bombers on Canada.

24: Points for the Bombers, ending their streak of seven consecutive games scoring at least 33.

Nichols was the first Bombers quarterback to make consecutive Labour Day Starts since Buck Pierce in 2010 and 2011. And the last time a Winnipeg quarterback won back-to-back Labour Day Weekend games? Dieter Brock in 1979 and 1980.