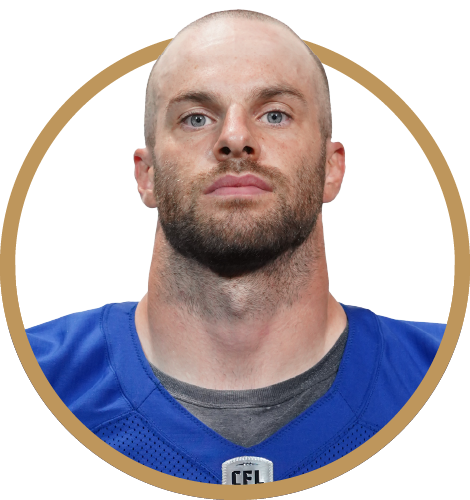 Briggs ranks behind only Jake Thomas as the longest-serving current member of the Blue Bombers in terms of games played with the team with 104 (Thomas is at 150) and is coming off his best statistically.
Working in a defensive rotation at linebacker, he finished with 24 tackles and five more on special teams while adding a forced fumble and an 83-yard fumble-return touchdown in a game in Toronto on August 21st. That was the first TD in Briggs’ professional career.
On January 17th, 2022, Briggs signed a one-year contract extension to remain with the team.

Injuries sidelined Briggs for a good chunk of 2019 — the first time he had missed substantial action during his six years with the Bombers. After missing only three games in the first five years of his career, Briggs was limited to just four games in 2019. A trusted and reliable contributor on special teams, he finished the year with three tackles — two on defence and one on special teams. Made his first CFL start in Ottawa on July 5th at weak-side linebacker, but was hurt in that game and then moved to the injured list.
Briggs signed a one-year contract extension on January 20, 2021.

Dressed for all 18 regular-season games and both postseason contests, marking the fourth time in his five-year career with the Bombers he did not miss any action. Briggs finished third on the club i special-teams tackles with 13 and chipped in with three tackles on defence. Signed a two-year contract extension with the Bombers on December 17, 2018.

Briggs completed his fourth season with the Bombers and continued to make his contributions on special teams. Finished with 14 special-teams tackles, tied for third on the team and a career best, while adding eight tackles and one quarterback pressure in his defensive reps in 15 games.

Briggs did not miss a game in his first three seasons with the Bombers, after being selected in the second round, 17th overall, of the 2014 CFL Draft. He made an impression quickly on special teams, registering 11 tackles in kick coverage in both 2014 and 2015, adding seven more in 2016.

Briggs recorded 40 defensive tackles (31 solo), two quarterback sacks, one interception and one forced fumble in eight games in 2013 for McGill, winning the Friends of McGill Football Trophy as the team’s most-outstanding defensive player. He also played for Team East in the CIS East-West Bowl.