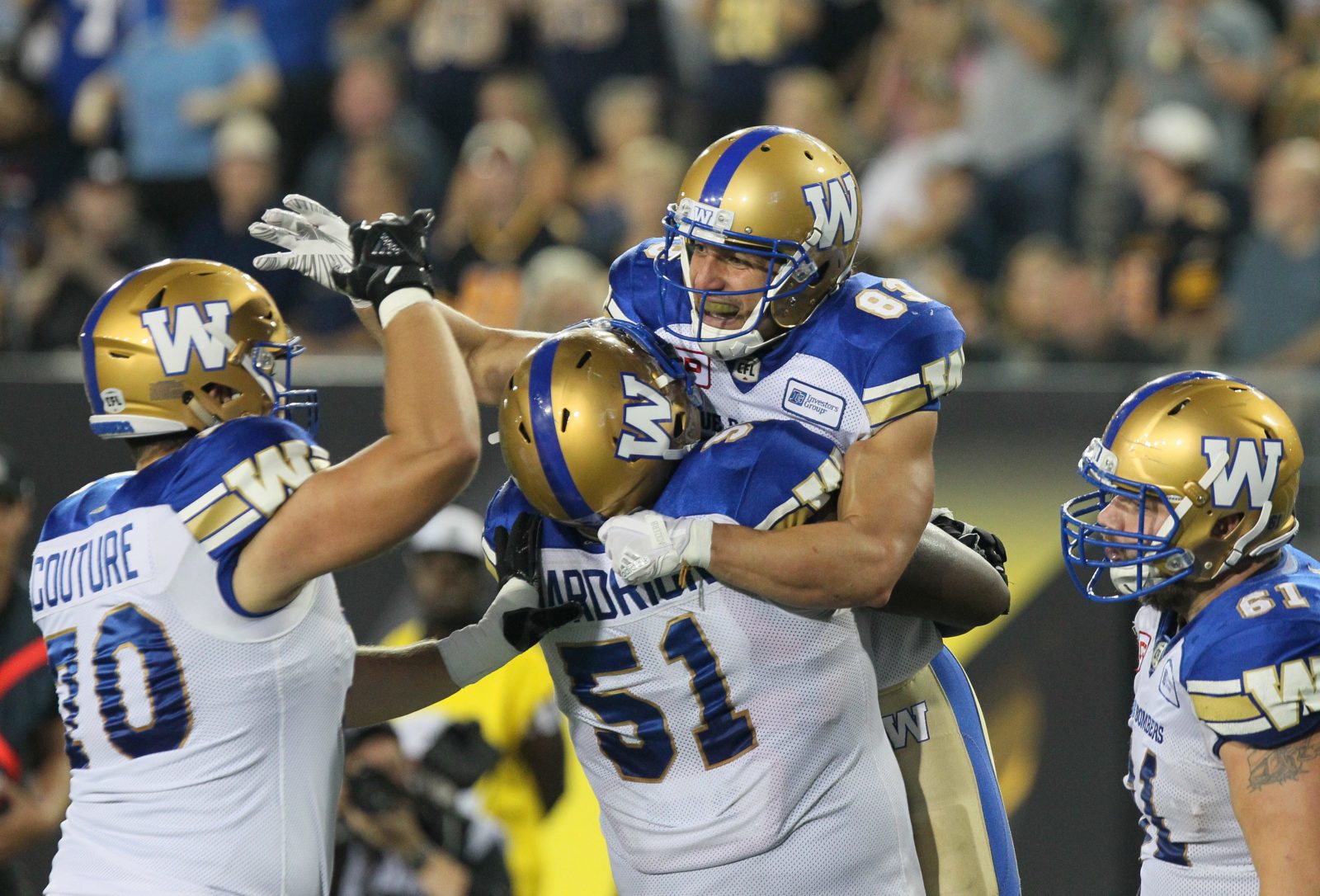 HAMILTON – It wasn’t without its flaws and mistakes. Indeed, as works of art go, it was more finger painting than Picasso.

But the Winnipeg Blue Bombers did exactly what they were supposed to do Saturday night in Steeltown, stiff-arming all the chatter about a ‘trap game’ and respecting a winless opponent in a 39-12 victory over the Hamilton Tiger-Cats in front of an announced crowd of 23,517 at Tim Hortons Field.

The win, Winnipeg’s third straight, improves the Bombers to 5-2 and sets up a superb West Division showdown next Thursday at Investors Group Field against the 7-0 Edmonton Eskimos.

The Ticats, meanwhile, dropped to 0-7 and have now lost eight straight at home.

“We want to win games and we don’t really emphasize how we win ‘em, we just want to make sure we win, especially on the road,” said head coach Mike O’Shea. “It was a pretty smart game and I thought we managed the clock extremely well and we played clean in terms of giveaways-takeaways and penalties. 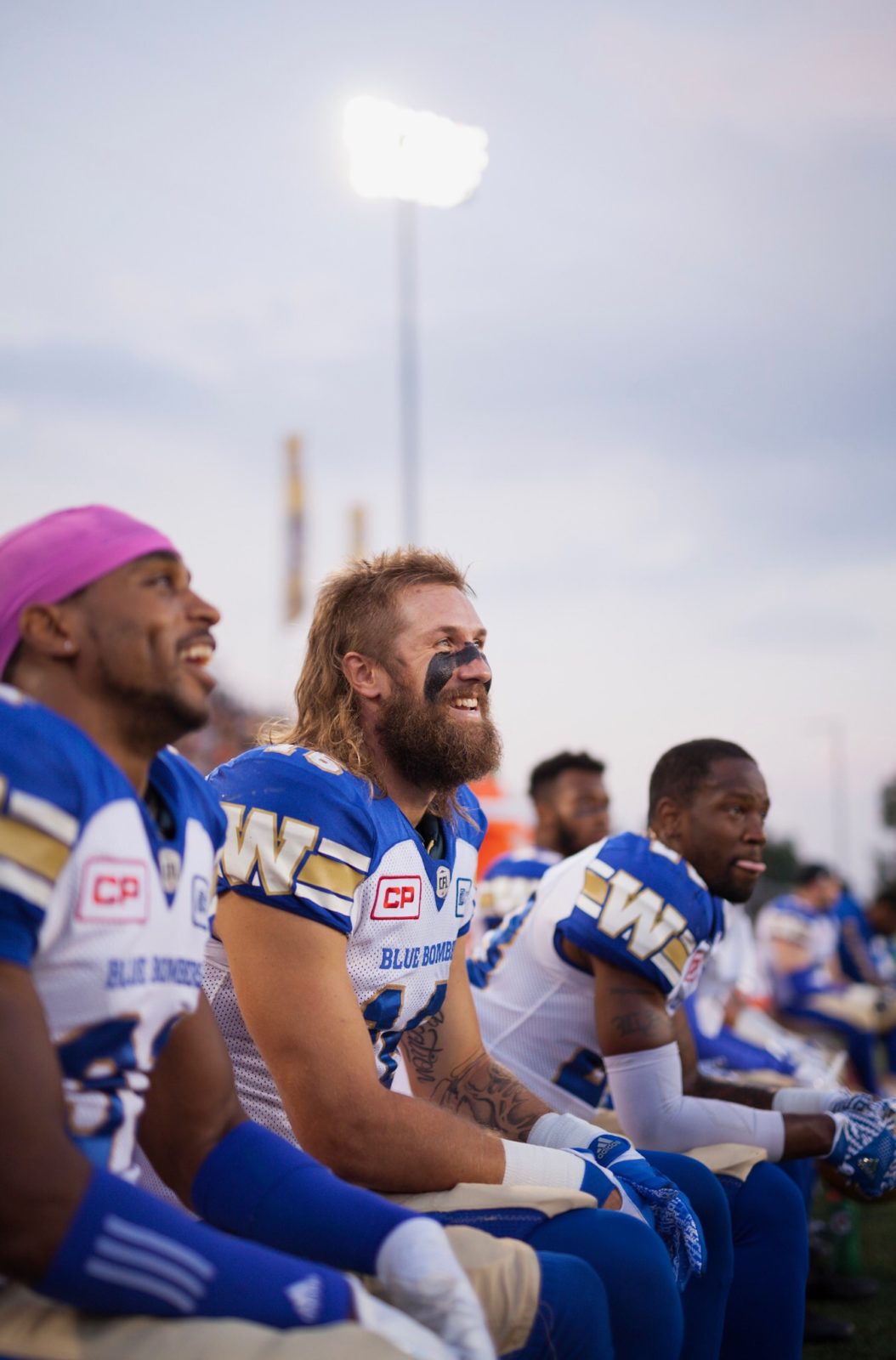 “There’s still a little room for improvement, obviously, and a couple things where the guys will look at the film and wish they had a couple plays back here and there.

“But it’s certainly good to come away from here with a win,” added O’Shea. “I don’t care what their record is, it’s still tough to win games in this league.”

The score, as lopsided as it was, still flattered the Ticats. Winnipeg made several visits inside the Hamilton 30-yard line, but settled on eight field goal attempts by Justin Medlock – six of which were made after one attempt hit the upright and another was blocked – from 34, 31, 31, 44, 57 and 34 yards.

But the Bombers got an efficient, error-free game from quarterback Matt Nichols, who completed 25 of 35 for 267 yards with two TDs – one to Julian Feoli-Gudino, the other to Darvin Adams – without throwing an interception.

The Bombers also controlled both sides of the line of scrimmage, as Andrew Harris rushed 14 times for 107 yards and Timothy Flanders added 20 yards and a late score along the ground, while the defence racked up five sacks from five different players.

“It was a tough one, it’s what we expected,” said Nichols, who has now gone three games without an interception. “It’s never easy to win, especially on the road, in this league. I felt like we made some plays when we needed to at the right times.

“We still need to clean a few things up, but we’ll talk about that tomorrow. We’re just excited to get the win.”

“There’s obviously some things we want to clean up, but that’s football,” added Harris. “You’re not going to play a perfect game and they gave us some troubles at certain points in the game offensively. We knew that they had good guys on defence and they were going to make some plays, but we just wanted to be the one who made more plays and today we did.

“We got the job done. We got the two points and now it’s on to the next one.”

The Bombers limited the Ticats to just 188 yards net offence – including a paltry 31 yards rushing – while forcing the three turnovers and racking up the five sacks, one each from Chris Randle, Trent Corney, Kyle Knox, Jamaal Westerman and Jake Thomas.

“It was really nice to see a lot of guys get rewarded with some nice plays,” said Thomas. “It’s showing what kind of defence we can be. Hopefully we can start stringing it together for four quarters.

“We have a really young group… we have a lot of veterans, but especially in the secondary we have some young guys out there all year. As the season gets going we’re going to get more and more comfortable out there and hopefully you’ll see more results like this.” 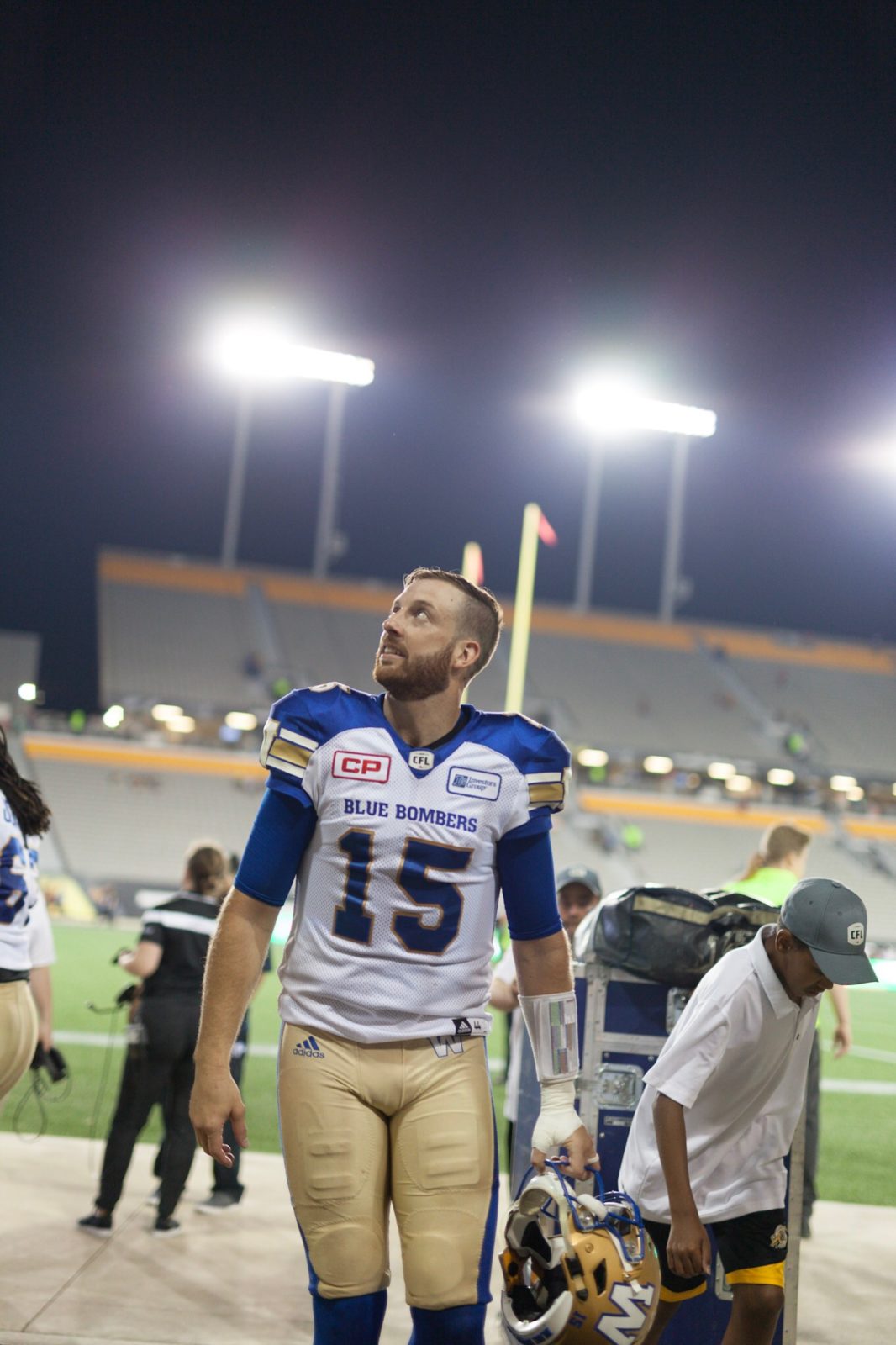 6 – Field goals by Justin Medlock, who racked up 21 points for the second straight week.

Andrew Harris rushed for 104 yards on the night, and in the process, moved past two former Bombers in Dave Raimey (5,528 yards) and Gerry James (5,554) into 33rd spot on the CFL’s all-time rushing yardage list… Medlock was playing in his 100thcareer game and now has accumulated 1,057 points.

10-3: The Bombers record in their last 13 regular season road games.

3-1: Zach Collaros career record against Winnipeg. He had been unbeaten vs. the Bombers until Saturday.

+12: In their last three wins over the Ticats the Bombers are +12 in the turnover ratio, forcing 15 Hamilton mistakes while committing just three of their own. Winnipeg forced two fumbles.

3-0: Winnipeg’s record in its last three vs. Hamilton.

15-5: Matt Nichols record since replacing Drew Willy as the starter last July. He is 23-17 overall in his career.