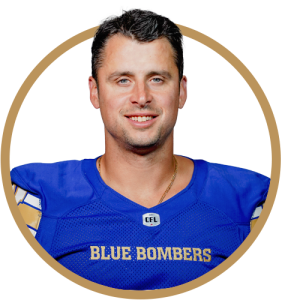 Collaros followed up a sensational 2021 season with the Blue Bombers with another superb year in 2022, as he helped lead the team to a franchise-record 15 wins and a berth in the 109th Grey Cup.
Collaros was named the CFL’s Most Outstanding Player and all-star quarterback for a second consecutive season while posting career-high numbers in passing yards (4,183) and touchdowns (37). The 37 passing TDs was second-most in Blue Bombers history to the 46 Khari Jones threw for in 2002 and the highest total in the CFL since Henry Burris threw for 43 scores in 2012.
His touchdown-interception-differential of 37:13 – or +24 – tied for the ninth highest in CFL history (Montreal’s Anthony Cavillio was +30 in 2008) and is new Blue Bombers record, eclipsing the +23 ratio Jack Jacobs posted in 1951.
The Blue Bombers have a 33-5 record in games Collaros has started since his arrival at the trade deadline in 2019, including a 6-1 record in postseason games and two wins in three Grey Cup appearances.
Collaros signed a three-year contract extension to remain with the club through the 2025 season on October 18, 2022.

The 2021 campaign was a memorable one for Collaros, as he helped guide his squad to a second consecutive Grey Cup championship while being named the CFL’s Most Outstanding Player, the Blue Bombers Most Outstanding Player as well as earning West Division and CFL All-Star honours.
He was also named the MVP of the 108th Grey Cup after a 33-25 overtime victory over the Hamilton Tiger-Cats. In the process, he became the first Blue Bombers quarterback to lead the club to consecutive Grey Cup championships since Ken Ploen in 1961-62.
Collaros led the CFL in passing touchdowns this past season with 20 and posted a league-best quarterback efficiency rating of 111.0, while his 3,185 passing yards ranked second. Most importantly, the club’s record was 11-2 in games Collaros started in the regular season and he is now 17-2 overall in starts for the Bombers dating back to his arrival in 2019 and including the Grey Cup victory that November.
Collaros signed a one-year contract extension to remain with the Blue Bombers on January 20, 2022.

Collaros capped the 2019 season with a story-book ending, helping lead the Bombers to victory in the 2019 Grey Cup. He was 4-0 in his starts for the Bombers, including a come-from-behind 29-28 victory over the Calgary Stampeders in the regular season finale, followed by wins over the Stamps in the Western Semi-Final, the Saskatchewan Roughriders in the Western Final and the Hamilton Tiger-Cats in the 107th Grey Cup. In those four games he completed 67-of-97 passes for 851 yards with four touchdowns and one interception.

Collaros was acquired by the Bombers from the Toronto Argonauts on October 9, 2019 – the Canadian Football League trade deadline – along with a fifth-round selection in the 2020 draft in exchange for Winnipeg’s third-round selection in 2020 and, conditionally, the Bombers first-round pick in 2020. The pick was officially granted to the Argos on January 27, 2020 when Collaros signed a two-year contract extension with the Bombers.

He opened 2019 as the starting quarterback of the Saskatchewan Roughriders, but was injured on the first possession of the season and later traded to Toronto on July 31st for a conditional fourth-round draft pick in 2020. He did not see any action between the season opener and his first start with the Bombers in October.

Collaros was traded by the Hamilton Tiger-Cats to the Saskatchewan Roughriders on January 3rd, 2018 for a second-round draft pick. He started 14 games for the Riders in 2018, with the team posting a 10-4 record in those games, but was injured and not available for the team’s Western Semi-Final loss to the Bombers. Collaros completed 61.3 percent of his passes in 2018 for 2,999 yards with nine touchdowns and 13 interceptions while rushing for 103 yards on 24 carries. The Riders re-signed Collaros on February 12, 2019.

Collaros signed with the Tiger-Cats as a free agent on January 30, 2014 and over the next four seasons would start 43 games. He passed for 11,342 yards in his four seasons in Hamilton with 66 touchdowns against 32 interceptions with his best year being 2015, in which he threw for 3,376 yards with a touchdown-to-interception ratio of 25:8 in just 12 games before a knee injury ended his season. In 2014, his first CFL season as the No. 1 starter, Collaros helped guide the Tiger-Cats to a 9-9 record and first-place in the East Division and then to a victory over the Montreal Alouettes before Hamilton fell 20-16 to Calgary in the Grey Cup. He was named the Ticats Most Outstanding Player in both 2014 and 2015.

Collaros first signed in the CFL with the Argonauts on June 5, 2012, not long after a stint with the Tampa Bay Buccaneers as an undrafted free agent. Collaros dressed for four games as a rookie in 2012 and then all 18 in 2013, including eight starts.

Collaros had an outstanding career at the University of Cincinnati, where he appeared in 41 games for the Bearcats, including 25 starts. He became the starter in 2010 and led the Big East in passing yards with 2,902 and in passing touchdowns with 26. Those numbers helped him in being selected the 2010 First-Team All-Big East quarterback.