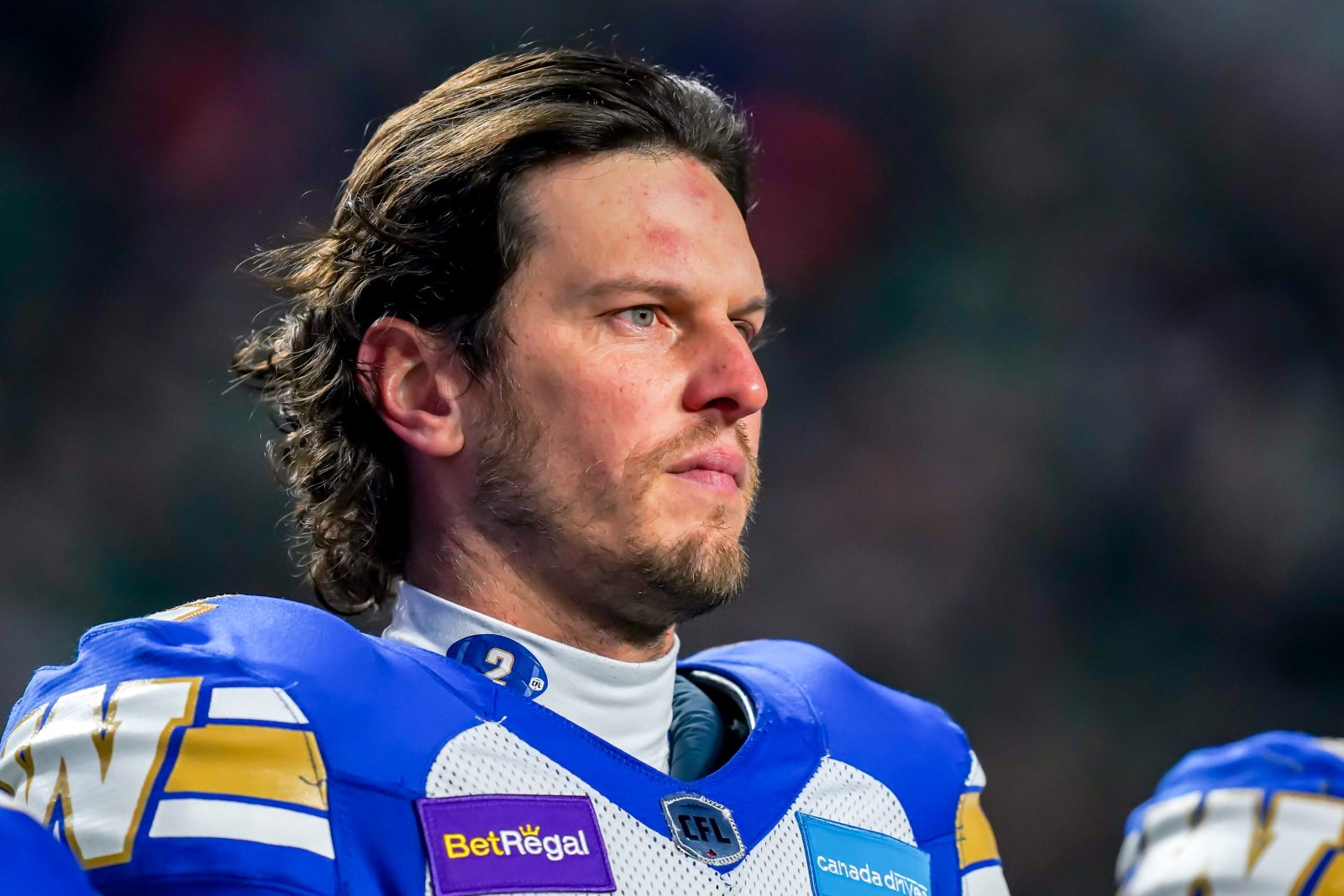 REGINA – It was a good hour after the final kneel-down in the 109th Grey Cup and inside a morose Winnipeg Blue Bombers dressing room, a handful of players still hadn’t peeled off their jerseys and shoulder pads.

There were whispers, there were hugs and there were tears. Lots and lots of tears after the first playoff loss for many of the players since the 2018 Western Final in Calgary against the Stampeders.

“You feel it. You definitely feel it, and it’s been a while since we had this feeling,” said receiver Rasheed Bailey who, like many, sat in his locker stall with a look of disbelief on his face. “I don’t know, maybe it can be a good thing for us. I don’t know what the future is going to hold, but this one is going to sting for several months, to know that they were one point better than us today.

“When we don’t play to our standard, we lose games and today wasn’t our best. There’s nobody to point your finger at. When you lose, all you can do is self-reflect and look at what you didn’t do, what you could have done better. I sat out there afterward and watched and felt it and I’ll be better for it. This whole locker room, this organization, will find a way to get back to being on top again.”

That is undoubtedly true, but it’s hardly the offseason the club wanted to face after posting a franchise-record 15 wins and being on the edge of making history as the first team to win three straight Grey Cups since Edmonton’s dynasty of 1978-82.

“It’s hard. No celebration. No getting back to Winnipeg for a parade or anything like that,” said defensive end Willie Jefferson. “You just get ready to go home now and get ready for the offseason and get ready to do it all over again next year.

“I told the guys at the end, now we’ve got to look at this film and find something to fuel yourself for the offseason to make you want to come back even better, even stronger, even faster. We’re going to do everything we can to get back in this game and when we get back, you’ve got to remember what this felt like so that you don’t feel it again.

“There were opportunities that we had – offence, defence and special teams – they got away from us. It was little things, too.” 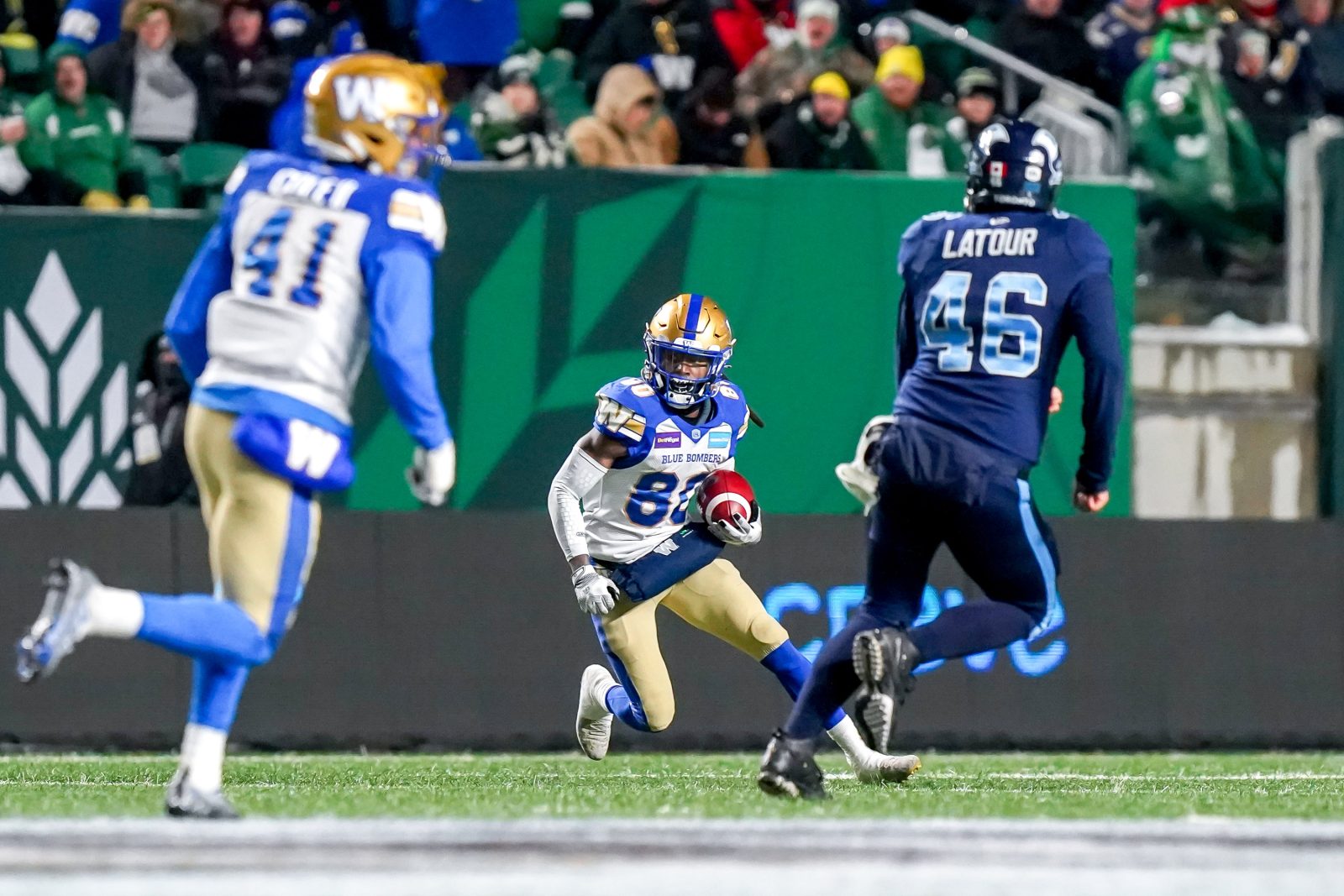 THERE IS SO MUCH TO UNWRAP… from Sunday’s loss, from the inconsistency of the offence to the magic of Janarion Grant and the dramatic highs and lows in the play of the special teams, to how it dramatically unravelled in final 14 minutes of the fourth quarter.

The Blue Bombers seemed to have grabbed hold of momentum with Grant’s sensational 102-yard punt return touchdown – a new Grey Cup record, his second in as many playoff games after one in the Western Final and his fourth of the year – but that’s when things started to go sideways.

Marc Liegghio missed the ensuing convert – which would prove costly in the end – but there were mistakes all over the field when there was an opportunity to lock down another title.

Winnipeg’s four fourth quarter possessions featured two interceptions – one by Dakota Prukop, the other by Zach Collaros – along with one punt and then the dramatic conclusion when Liegghio’s potential game-winning 47-yard try was blocked up front by the Argos.

In between there was the Argos converting a second-and-20 situation with less than six minutes remaining, beginning with an offside penalty and then a 20-yard run by Chad Kelly – who had entered the game after McLeod Bethel-Thomspon had injured the thumb on his throwing hand – that set up A.J. Ouellette’s go-ahead touchdown.

And even after all those whiffs, the Blue Bombers were still in position to win, especially after Nick Hallett blocked a Boris Bede field goal attempt with two minutes remaining.

The Blue Bombers then marched into position to win, or at least tie – benefitting from a roughing-the-passer call on Collaros on a third-and-13 – before Liegghio’s last chance was stuffed.

“From what I saw and how it felt off my foot, I think that last one was going to go in,” Liegghio told media after the game. “That’s how I wanted the game to go, a field goal at the end there. But they made a play. It’s not the outcome we wanted in the end, and it just sucks that it had to end that way, on one point. It’s just something that I’m not going to let happen again.” 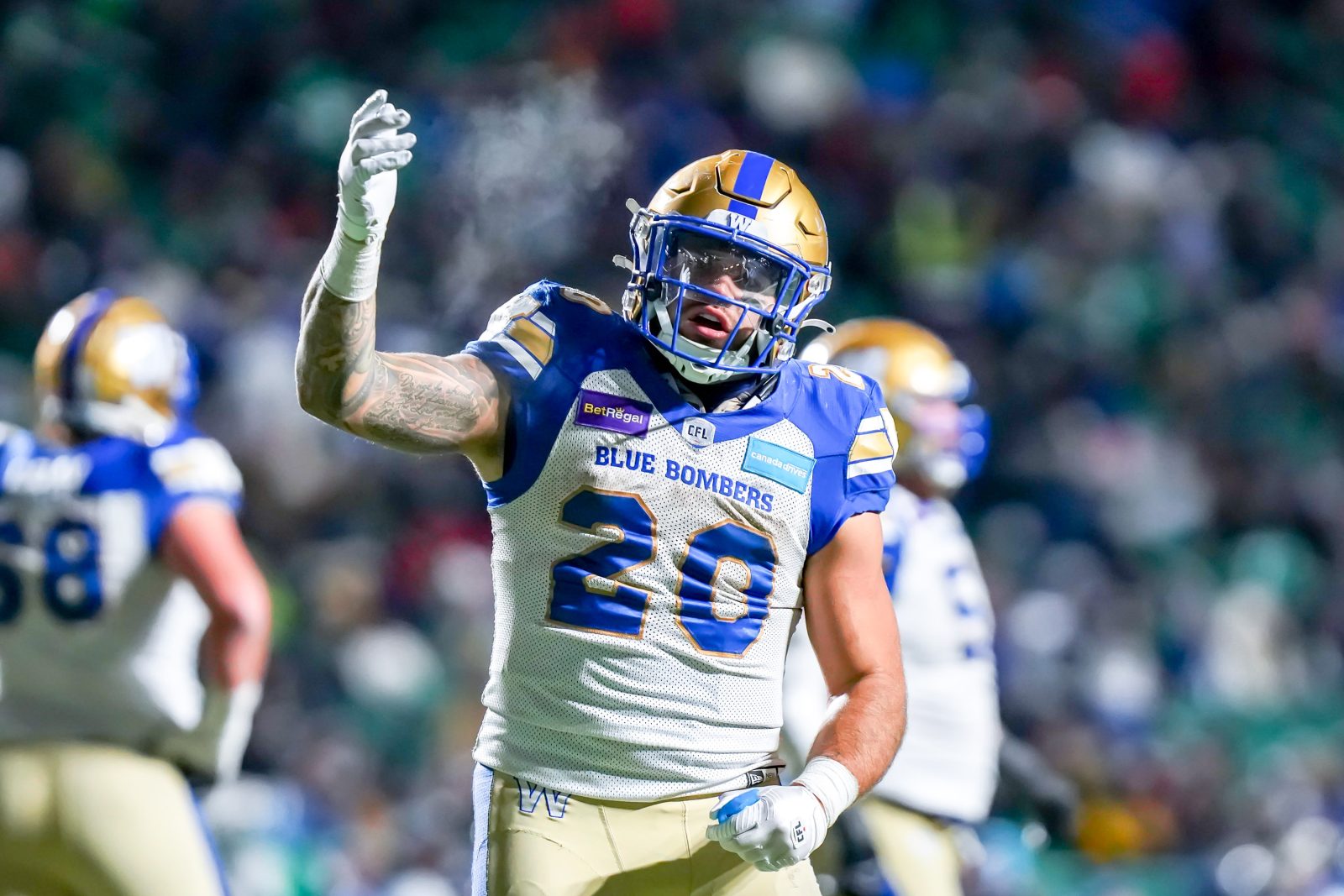 THE ’NOW WHAT?’ QUESTIONS… will begin to be debated and analyzed by the Blue Bombers and management over the next few days in exit meetings and in the months ahead. There are some meaty issues to tackle, too, the biggest being head coach Mike O’Shea’s expiring contract.

Clearly the Blue Bombers have built something of substance here, with the two consecutive championships followed by a 15-3 record and then a loss in the championship game. But it’s a change business, as they say.

“Look around this locker room, you’re going to see a good majority of familiar faces who are going to be back next year,” said running back Brady Oliveira, tears welling in his eyes. “We know what we’ve got in this locker room. Guys want to come back and if we can keep these guys together that chemistry is already there, that confidence is already there, and it builds every season if there’s not a lot of turnaround.

“They just made one more play than us and you’ve got to give them credit. They won the Grey Cup and that’s great, but we’re going to use this as fuel to the fire. I know personally I’m going to attack this offseason. I hate this feeling.”

That was a universal sentiment after months and months of early mornings, heavy workout sessions and eons of film work. One day, a handful of plays, and suddenly it ends with a devastating result.

“I see what these guys bring every single day,” said linebacker Adam Bighill. “That’s why I’m sad it didn’t happen tonight, because I know guys have worked for it. I’m very proud of every single guy in this room. It’s just tough we didn’t pull through.”