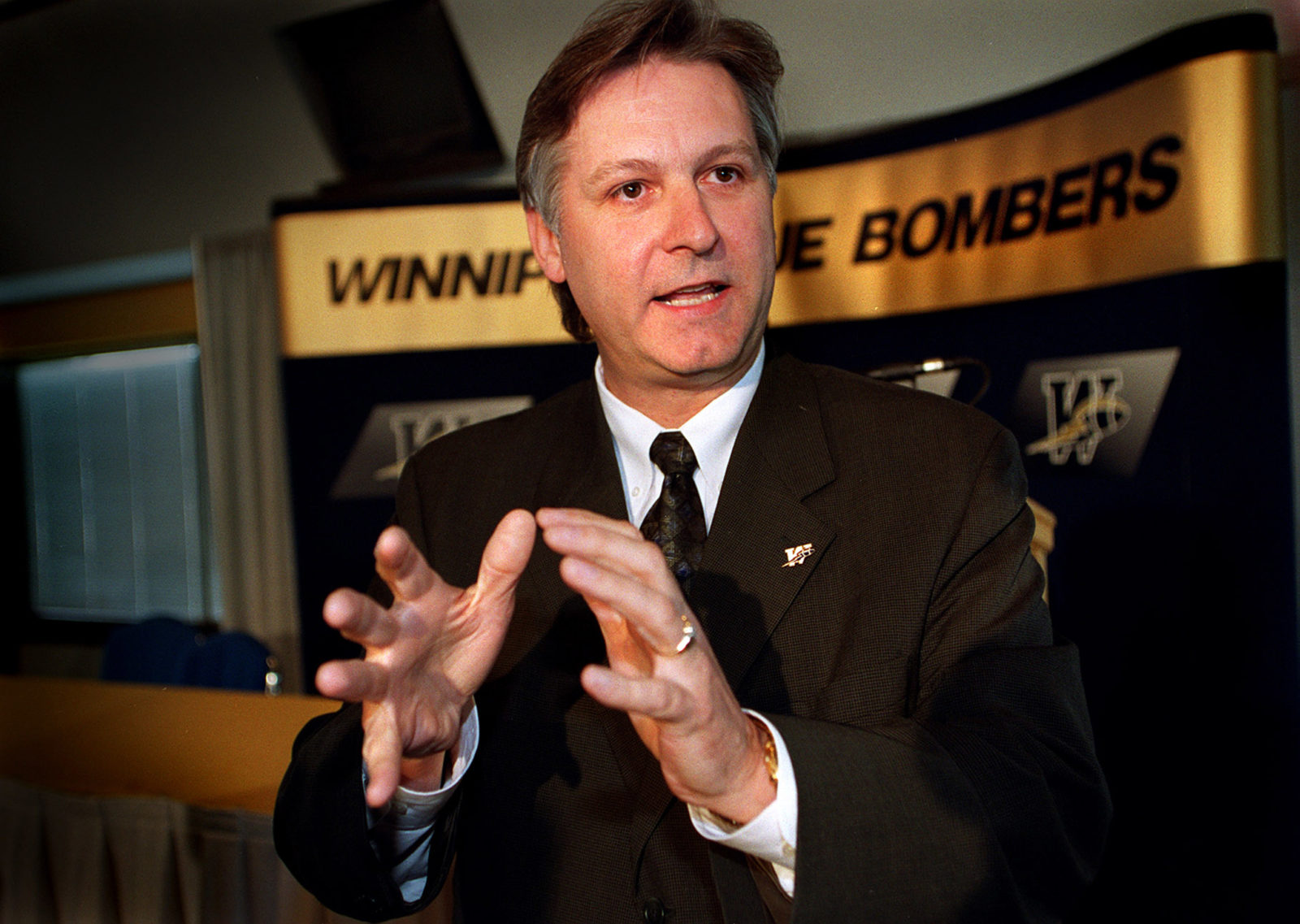 The Winnipeg Football Club will officially welcome two new members to its Hall of Fame at this week’s annual Legacy Dinner: Robert Gordon, who played with the Bombers from 1999-2004, and builder Bob Miles, the long-time board member and former club president.

This is the first of our two profiles on the new inductees.

Bob Miles was called to serve, and eagerly obliged when the Winnipeg Blue Bombers came courting.

After all, his family has held Bombers season tickets for the better part of 45 years and Miles can still rattle off scores and details of games from his youth. He bleeds blue and gold, as they say, and with his background in finance, was eager to help the football club in whatever way the board of directors might require.

Yet, here’s the thing about volunteering, and especially so as it applied to the Bombers in the early-to-mid-1990s when Miles first started serving: it’s seldom only about weekly board meetings, team photos and possibly getting a chance to slurp from the Grey Cup as an executive. It can mean hours of tireless work, almost all of it behind the scenes. And it just so happens Miles stepped up to serve during what was hardly a sunshine-and-lollipops-era for the club and the Canadian Football League.

In fact, those days represented some of the darkest in the franchise’s long and storied history and it was Miles’ task to steer the ship through some stormy seas. That work has him being honoured this week as one of the two inductees, along with player Robert Gordon, into the Winnipeg Football Club’s Hall of Fame. All of which is to say when he walks into Investors Group Field for a game now, the experience can trigger a floodgate of emotions, from the joy of seeing how far the franchise has evolved, but also the emotional scars that get re-opened from recalling how close his beloved team almost became extinct in 1999-2000. 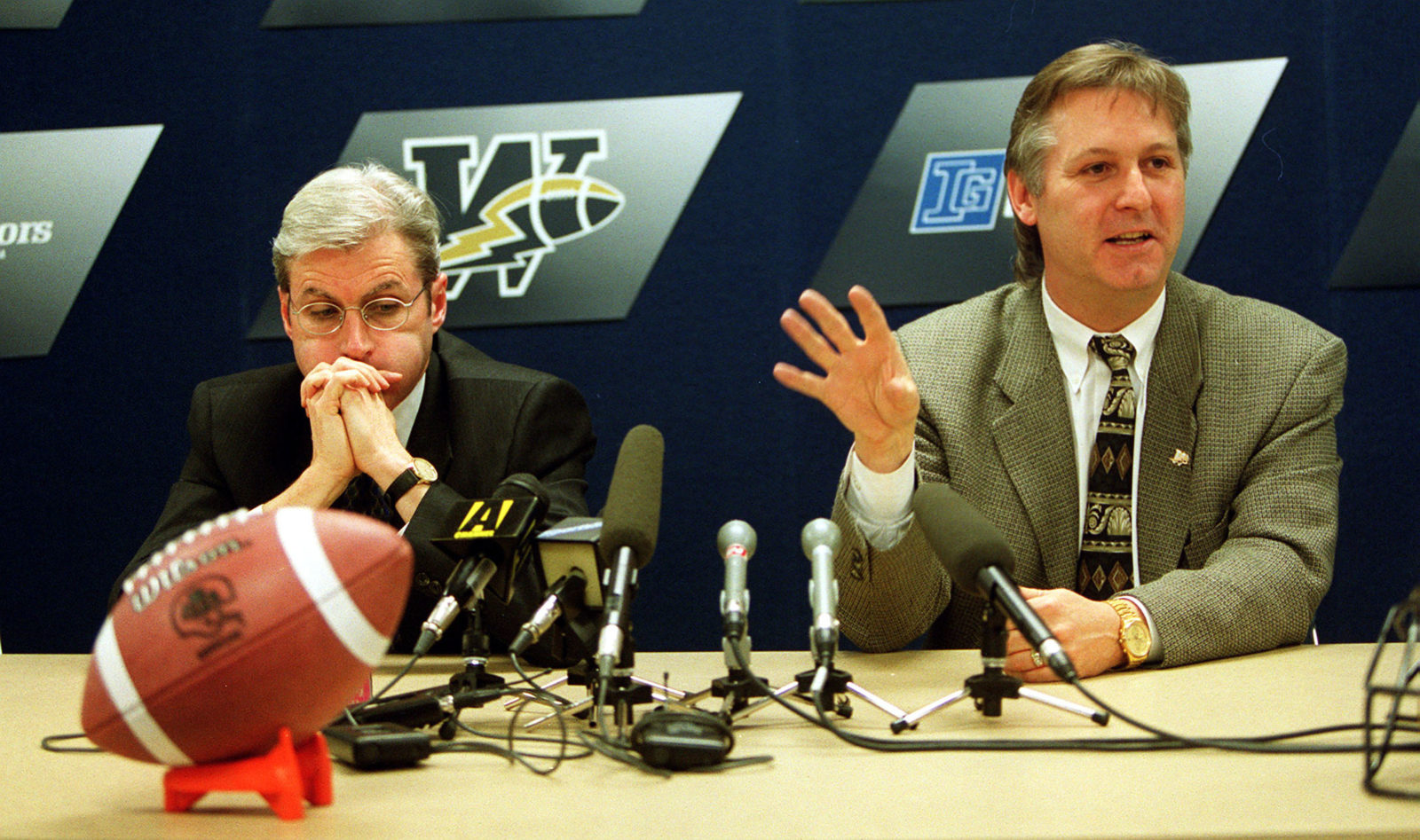 “I couldn’t be happier of how it worked out,” began Miles in a recent chat with bluebombers.com. “In my speech at the Legacy Dinner I’m going mention that what happened required a whole bunch of courage from the city and the province to continue to back the football club in those gloomy days. It required the courage of the governors of the CFL at the time to get involved and help us when there had been a history of past failures in the league. It required the courage of the volunteers who agreed to restructure the club and effectively fire themselves and then the courage of the new volunteers that came on board to a very difficult situation.

“And then there was the staff who hung in there through all of it and executed a plan flawlessly that led to the financial success that it is today. It was a tough time back then. The CFL was in disastrous straits and, quite frankly, because of those times we are where we are today.”

Miles joined the Bombers board in 1992, just at the end of a heyday that saw the club win three championships – in 1984, 1988 and 1990 – and appear in five Grey Cup games during a run from 1984-93. But the CFL’s failed expansion foray into the United States in 1993-95 had left the league and its member clubs bleeding. Telethons and bailouts were the order of the day, and by the time Miles was named president in 1999, the Bombers were dangerously close to flat-lining. 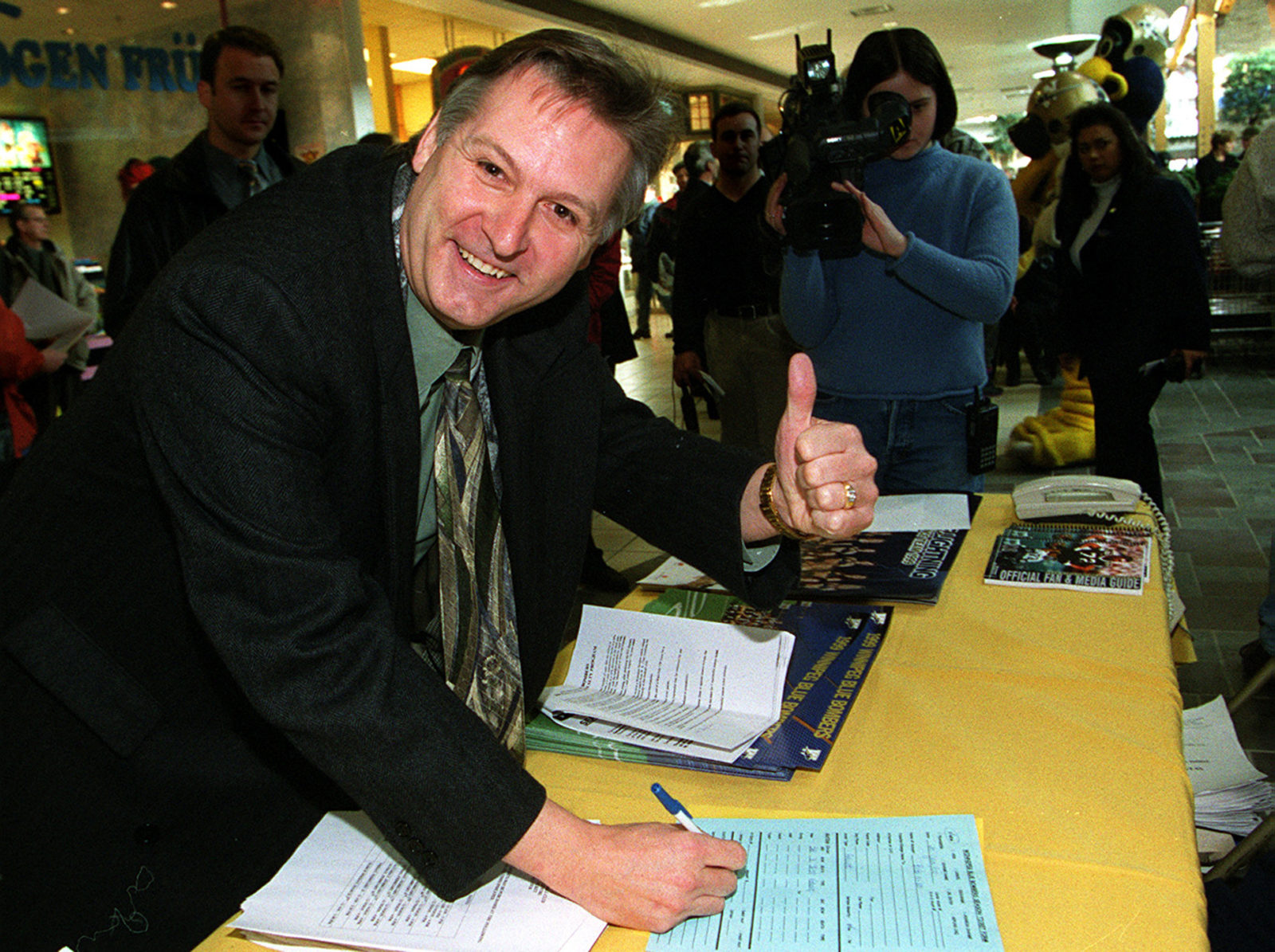 How close? Consider that an aggressive restructuring plan put together by Miles and his colleagues on the Bombers board was contingent on the support of the province and the city, but those two government branches were only going to sign off if the CFL stepped up as well. And weary of propping up franchises, the CFL and other member clubs had effectively issued an edict: no more bailouts.

“I can remember being at a CFL Board of Governors meeting in Toronto and going back to my hotel room after a long day and evening of meetings thinking we had lost the club because the league wouldn’t participate in helping us out,” recalled Miles. “And without them the province and city wouldn’t participate. After many starts and stops, under the leadership John Tory, who was commissioner at the time, we ended up doing a deal in the wee hours of the night basically on the back of a napkin.”

The CFL then agreed to a loan that, in addition to the help from the two levels of government, helped keep the Bombers alive. But that was far from the end of things, as the board went through a massive down-sizing (from 60 to 12) as part of a restructuring. Things were so tight for the staff that worked in the office at the time they were often bringing their own paper, pens and toilet paper to work as the club tried to save every penny.

So heck yeah, working through that and then walking into IGF today can send a shiver down a man’s spine, from the financial touchdown he helped author that saved the franchise to the feelings that resurface about those trying days. 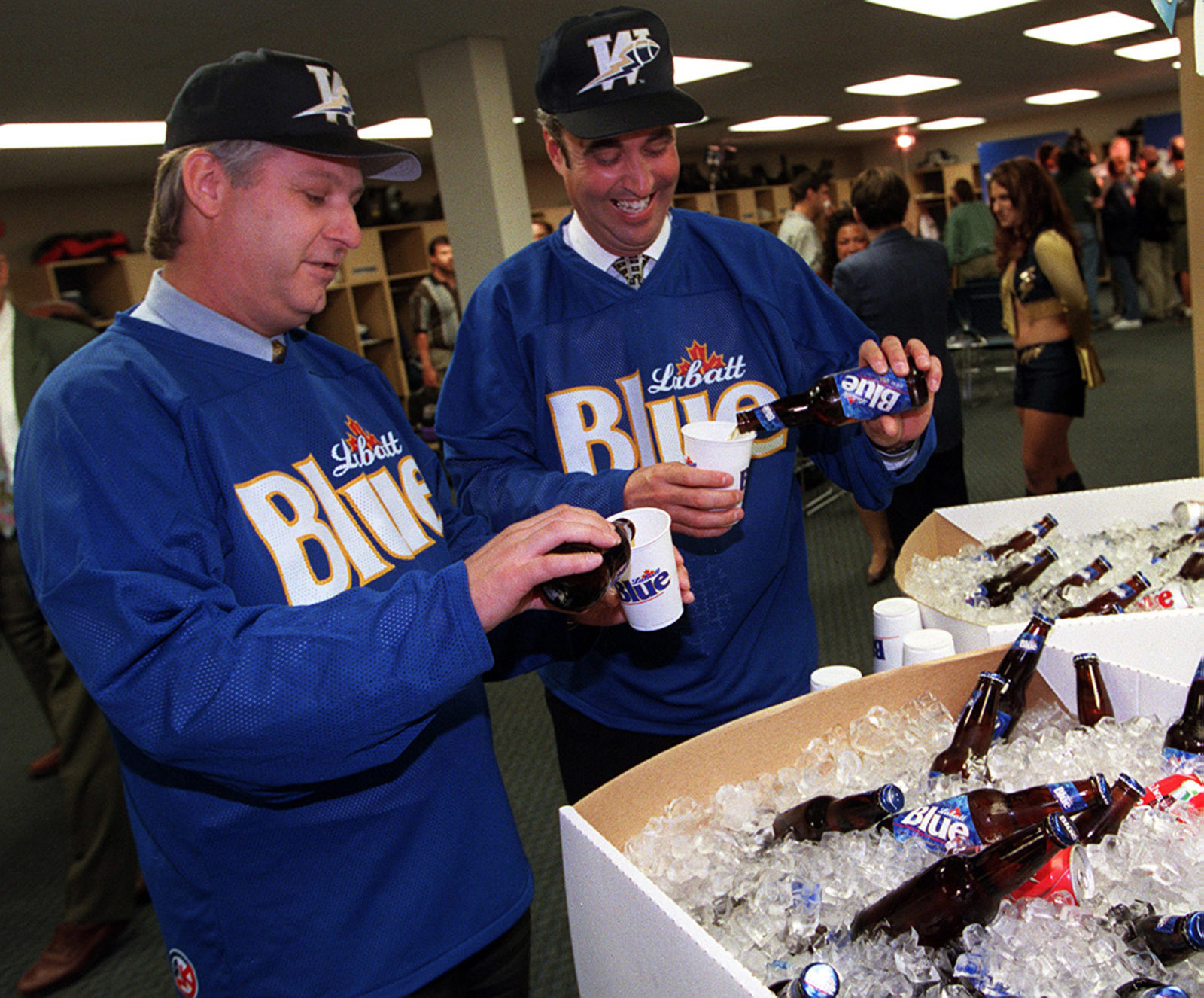 “It’s like a barbell feeling,” Miles explained. “When the club is playing well and we’re a contender I feel very, very proud. In some ways, this club wouldn’t be here today without what we did. On the other hand, I’ve got to tell you the scars on my back are pretty deep. I get reminded of the difficulties that we experienced occasionally. That’s why I use the barbell term… the scars fester a bit when I get those memories. But I’m proud of where the team is now.

“Sometimes people forget we’re volunteers trying to do something better for the community. We’re not paid. At that time, some of us were putting in countless
hours after work on this and then my family is reading in the paper about what a schmuck I am. All that stuff weighs on you. So I’m just thrilled it worked out. I’d still be OK if we did it and it didn’t work out, but it’s a ton times better that it worked out. I’m just extraordinarily proud to represent the group of the executive committee that did what we did.”

Miles was born in Moose Jaw – his father was in the air force – but his family moved here when he was six. He continued to serve on the Bombers board for two more years, until 2002, after his term as president ended. He retired from CIBC in 2008 and is currently the President of MAG Consulting, Ltd, while serving on the board of advisors for two large Winnipeg-based private businesses. He previously worked for James Richardson International and PricewaterhouseCoopers.
Miles is married and is a father of three who together have made him a grandfather six times over. He has also volunteered for the Canadian Cancer Society, the Juvenile Diabetes Foundation and Manitoba Chamber Orchestra.

He is also an avid musician – he played guitar to help cover his tuition during his college days – and is lead guitarist for the cover rock band ‘Echo Park’, which has an upcoming gig on October 19th at the Park Theatre with proceeds going to the Riverview Health Centre.