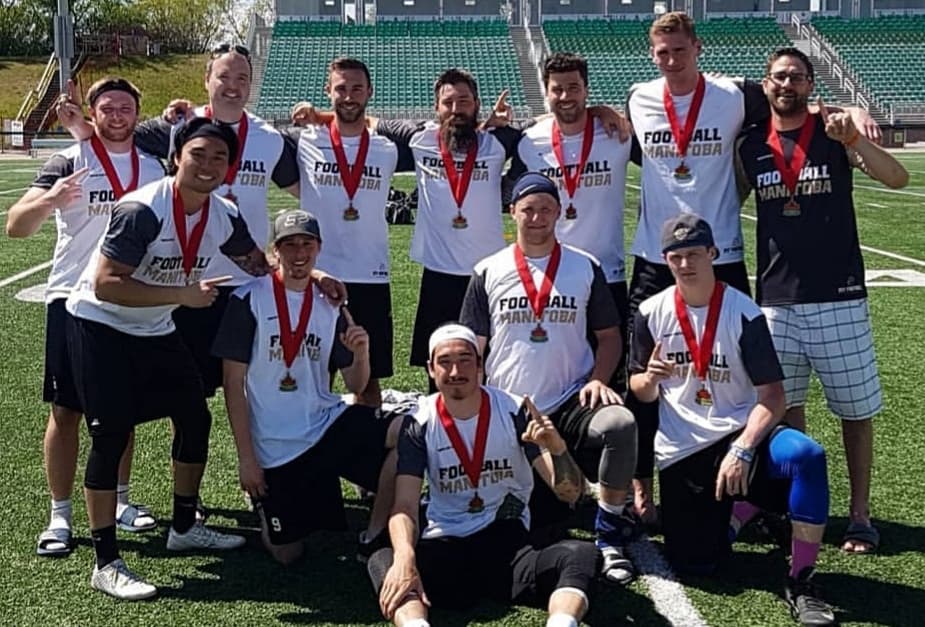 PIT Football’s 10thanniversary season saw the league partner with the Winnipeg Blue Bombers to host both regular season and championship games at Investors Group Field.
PIT Football also affiliated with Football Manitoba to offer a Fall/Winter indoor youth league, with over $10,000 in prizes awarded to our players.  An incredibly busy season culminated in the crowing of 15 new champions, with some incredible finishes and individual highlights. 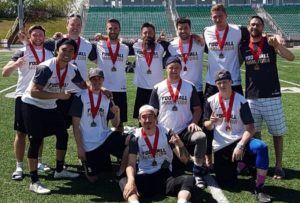 Team Manitoba captured the second National Flag Football Championship for this province and the first since 2003.
And, just like in 2003, it was Manitoba quarterback Jon Franklin who helped lead his squad to victory, some 15 years apart.
Team Manitoba was looking to avenge their round-robin loss to Team Canada, and they jumped out quickly by scoring on their first two drives. Tournament leading scorer Brandon Poulin hauled in both TD receptions, adding to the four touchdowns he had in the semi-final versus Team British Columbia. Keith Bourgeois and Bison standout wide receiver Riley Harrison had Team Manitoba’s two converts. From there the defence of Team Manitoba stymied a Team Canada lineup loaded with former CFL talent.  The game was capped off when the tournament’s top rusher, Brandon Labonte, sacked the Team Canada quarterback for a safety to end the scoring and the game. The two top teams in the Nation put on quite a show in Saskatoon with Manitoba laying claim to being the best in the country. 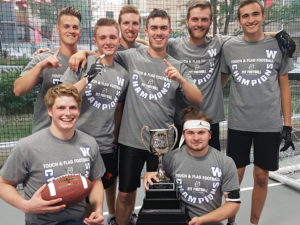 The East Size Aztecs captured the first-ever summer flag football championship in Manitoba history, and did so in style.
The Aztecs were coming off an overtime semi-final victory where they came back to tie the game after being down 13 points with just three minutes remaining. It was déjà vu all over again in the championship game. The Arrows were leading by three points with under two minutes remaining, in large part to Heinrich Grenz’s five touchdown receptions. However, Aztecs QB Adam Gorzen calmly led his team down the field and threw the winning touchdown pass with only two seconds left on the clock. The cardiac kids strike again and win the championship in amazing fashion. 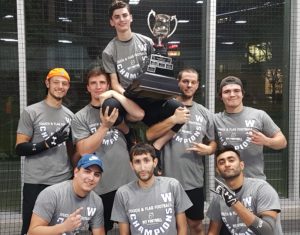 Tonawanda started the season 9-0, however down the stretch they fizzled to a 1-6 record.
Conversely, Win or Lose started the season on a losing streak but came on strong at the end, culminating in the dismantling of Tonawanda in the finals. Francesco Notarianni led Win or Lose with 18 points and two interceptions, both of which were returned for scores.
Neil Burke headed Tonawanda with an interception and their lone TD pass, but unfortunately Tonawanda was put out to pasture this day, much like the Kardex they are named after! 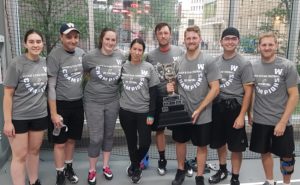 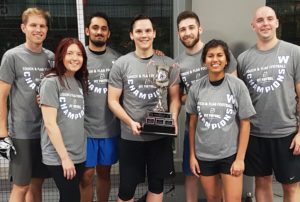 Tom Bradycardia went up early and never looked back in this final as they captured their second Co-ed championship.
Avni Jain continues to prove that she is the best female player in the province after scoring three touchdowns and adding an interception en route to victory. Up-and-comer Lauen Garbutt also had two interceptions for Tom Bradycardia, including a Pick-6.
Chloe Rodriques kept the Dillos North in the game defensively with a career-high three sacks in the game,  however it was not enough on this day as the Tom Bradycardia defence combined for five interceptions and two sacks, keeping the Dillos North offence in check all game long. 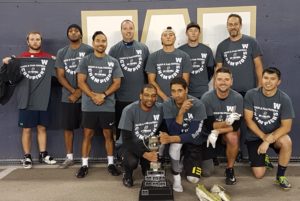 The Beerhawks had a glorious opportunity to be the first team to win both the Division 2 and Division 1 championship in the same season. The Beerhawks would take on a Guild of Calamitous Intent team missing a significant portion of their team to injury or lost to the start of the Manitoba Bisons season. However, the Beerhawks misspent their opportunity, allowing the Guild to become the first team to win three consecutive Division 1 outdoor titles.
It was a very successful season for the Guild as not only did they add another tally to their all-time championship trophy case, but many players on the team were also on the Provincial Flag Football roster who took home top prize at the National Flag Football Championships. 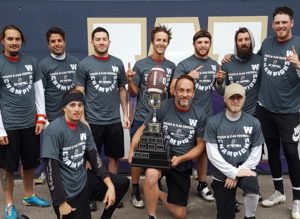 The MonStars were coming off a spring championship and were the class of the division during the regular season.
Unfortunately, an injury to their start player Brett Macfarlane in a hockey game earlier in the week left the door open for the Beerhawks to capture their second consecutive outdoor Division 2 championship.
The MonStars were down a couple of points late in the fourth with the ball first-and-goal from the four-yard line, however the Beerhawks defence dug in and held the MonStars to zero points on the drive.  Keith Bourgeois then led a remarkable 106-yard touchdown drive to seal the game and the Beerhawks second consecutive Division 2 outdoor championship, securing their title as one of the top teams in the province. 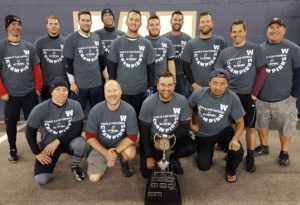 The No D season was marred by injuries, but redemption in the form of the Division 3 championship was in their grasp.
The Ledge had other plans, however, and came out firing in this game by scoring on their first three drives and then never looked back. Neil Gwizon threw five touchdowns to four different receivers.
The Ledge’s defence stymied No D, holding them to zero points in the second half.  The Ledge won their second outdoor championship and celebrated righteously after the game in the lounge. These two teams led the league in after-game festivities during the season, so it was fitting that the two teams would play each other in the most sportsmanlike final of the day. 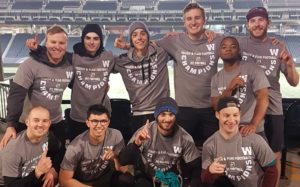 Super Smashed Bros shocked the top-seeded Blount Force by scoring two touchdowns in the final three minutes of the game to pull outan improbable comeback.
Down one point and faced with a third-and-short situation, Super Smashed QB Lucas Wollmann decided to go for it all and threw deep to WR Ryan Kehler, who broke man-to-man coverage. Ryan took the ensuing catch 60-yards for the go ahead touchdown.
With under two minutes remaining and Blount Force driving, Ricardo Cedric McKinney housed his second interception of the game to end Blount Forces own comeback attempt. This game was the final game of the season under the lights at IGF and it lived up to all the hype! 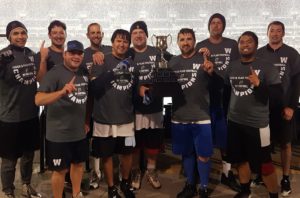 The Enforcers had an incredible season capped off by an implausible final game. What this game lacked in score, it made up for in entertainment, as pretty much anything that could happen did.
The Snappers jumped out to a quick lead courtesy of an 80-yard interception return touchdown, and then followed that up with a blocked punt-return touchdown to go up 12-0. However, the Snappers were unable to capitalize on the momentum as veteran QB Scott Rhodes settled in and led the Enforcers to a methodical comeback that included a 40-yard run, a rouge, a long-bomb TD pass, and then a safety late in the game.
Despite the low score, the points that were put up, were put up in every conceivable fashion! 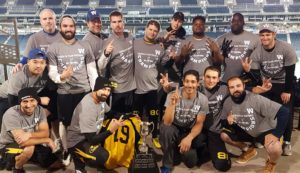 For most of the regular season, it looked like the Gotham Knights might have had the first undefeated season in outdoor history, however a loss to the Snipers ended that possibility and set up a nice grudge match in the finals.  It looked as if the Snipers were once again going to have the Knights number as they were up by a point mid-way through the fourth quarter and on the three-yard line first and goal. The momentum shifted when Luke Jacobucci came down with a huge interception in the end zone which gave Gotham life!  MVP Nick Jessamine then led the Knights on a long drive and scored the covert to win the game with only seconds left on the clock.  An amazing finish to an amazing game.

The GameCocks 19 Past Our Primetime 13 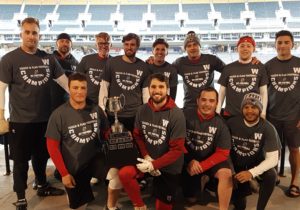 The GameCocks are proving why they may be the best up-and-coming team in the province, capturing their second straight title over the veteran-laden Past Our Primetime.
The GameCocks jumped out to a quick 13-0 lead, but Past our Primetime would not go away easily. The Past Our Primetime defence garnered six sacks and three second-half interceptions, including one on a punt-return pitch that kept them in the game. The GameCocks defence did not put up the same gaudy statistics, however they hounded the opposing quarterback all day while the offence was able to pull this game out of the fire thanks to David Mandrick’s three touchdown passes, two to speedster Isaac Henry. 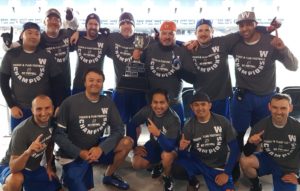 If you are a fan of defence, then this was the game for you!
The two teams combined for a record 16 interceptions, including a single-game record of 11 by the Glue Factory. The swarming defences kept this game tied at 7-7 until late in the fourth. That’s when Ivan Gibson took one of those 11 interceptions to the house to give Glue Factory the lead. Then, fittingly, Ivan intercepted the ball on the final play – his third interception of the game, to seal the victory.
The North End Hawkeyes were the toast of Division 8 for most of the season, however their opponents stepped up at Investors Group Field to prove that they were not quite ready for the Glue Factory.

Blouses 21 Blast from the Past 6 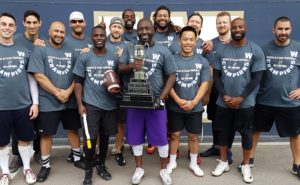 The Blouses defense was on point in the playoffs giving up just six points total through their two games! After blanking their opponents in the semi-finals, they held Blast to the Past to just a single score.  The defense was led by two interceptions from Ogo Okwumabua, and an interception return touchdown by Marlon Richards. Neil Jonker countered for Blast from the Past with both a touchdown pass and an interception, but it was not enough on this day to hold off the Blouses from winning their first Division 9 championship. 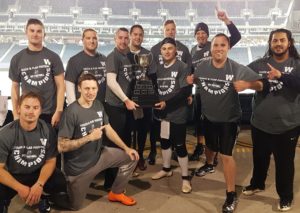 Moneyball won their first outdoor championship in what forever will be known as ‘The Snow Bowl.’
With the snow coming down hard at Investors Group Field, history would suggest that a low-scoring game was on tap. Despite the blizzard-like conditions, the snow seemed to have no effect as both teams moved the ball without much difficulty, as the teams combined for a championship-game high 68 points.
QB Drake Yaremko played near-perfect football during the playoffs throwing for three touchdowns and running for one in the final.
His play, combined with the defence’s two interception-return for touchdowns, sealed the victory for MoneyBall. 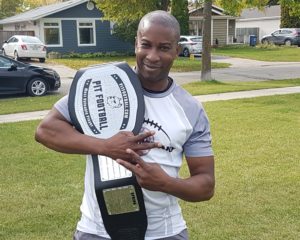 We would like to extend our congratulations to Jason Gibbons, who was voted the MVP of the summer outdoor league by his peers.  Jason’s stellar play for the duration of the summer combined with great sportsmanship made him an obvious MVP candidate.  Jason is the fifth MVP of the league and our second ever summer MVP.
Jason received a custom-made MVP belt and is the front runner for Winnipeg Blue Bomber season tickets next season.

Registration for our Fall indoor season is now open.  Registration information can be found here:  https://pit.redzoneleagues.com/forums/messages/26508-fall-2018-indoor-registration-information