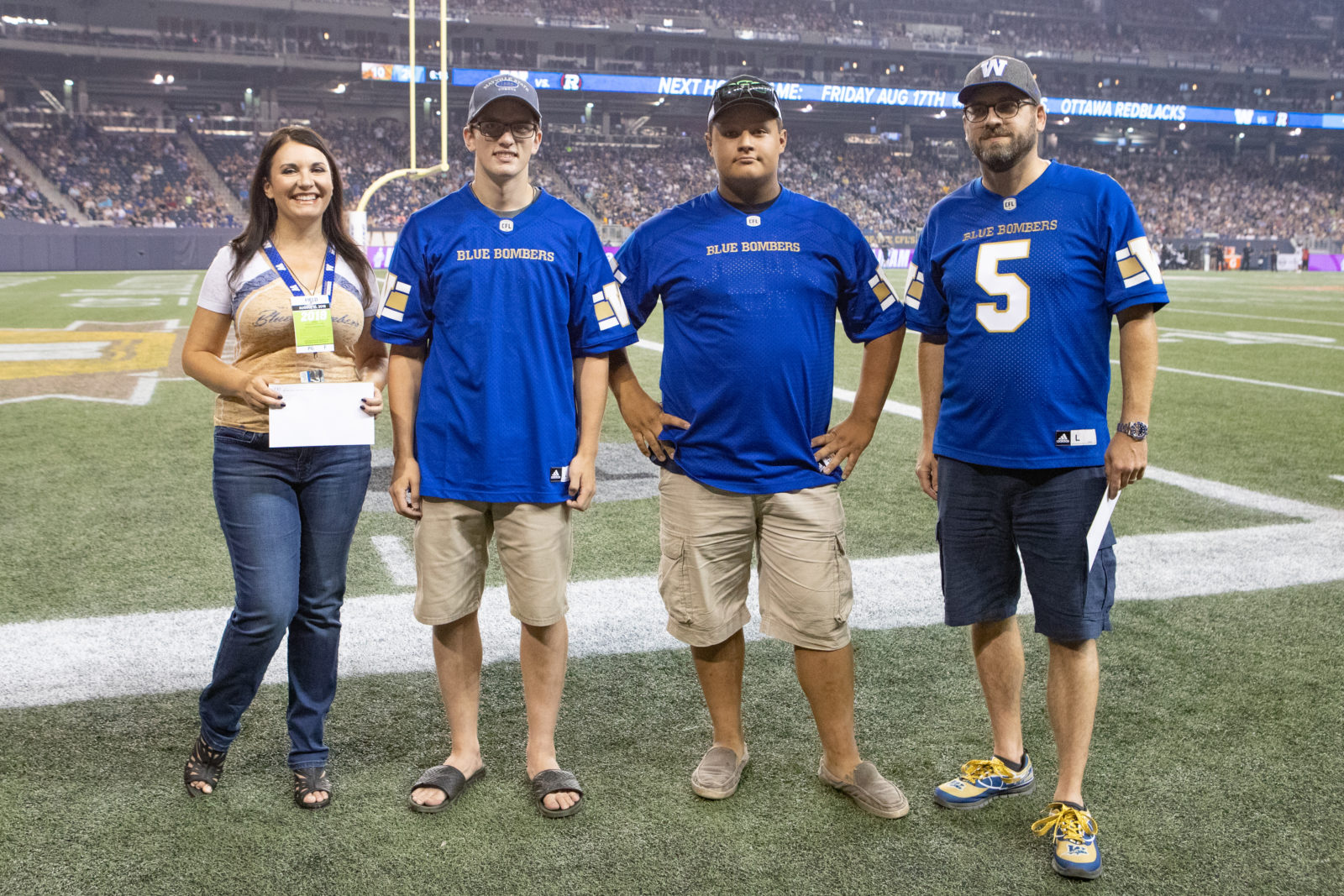 Jack Jacobs came north to the Winnipeg Blue Bombers in 1950 after eight years in the National Football League for the opportunity to really showcase his skills as a quarterback.

And all these years later, his legacy is again helping others follow in his footsteps.

The Bombers unveiled the two latest recipients of the Jack Jacobs Scholarship Friday night at Investors Group Field, as Joe Rosser and Mathew Baptiste were honoured with $1,000 scholarships from the Winnipeg Football Club and Eagle Vision – one of Canada’s top production companies which has been based in the city for 18 years.

Rosser and Baptiste are the third and fourth recipients after Rain Slater and Adam Thompson were first honoured with the scholarship last season. The Jack Jacobs Scholarship is now awarded annually to an Indigenous high-school student who ‘fosters a passion for football and has plans to pursue a post-secondary education.’

“This is a pretty awesome honour,” said Baptiste, who was born in St. Boniface and is Ojibway. “I’m very proud of this and proud of my heritage.”

Baptiste was the Reivers centre last season and played hockey and baseball, while refereeing lacrosse and hockey, volunteering in flag football and special events at the Victoria Beach Club, and working for the Manitoba Government’s Green Team in Bird’s Hill Park in the summer. 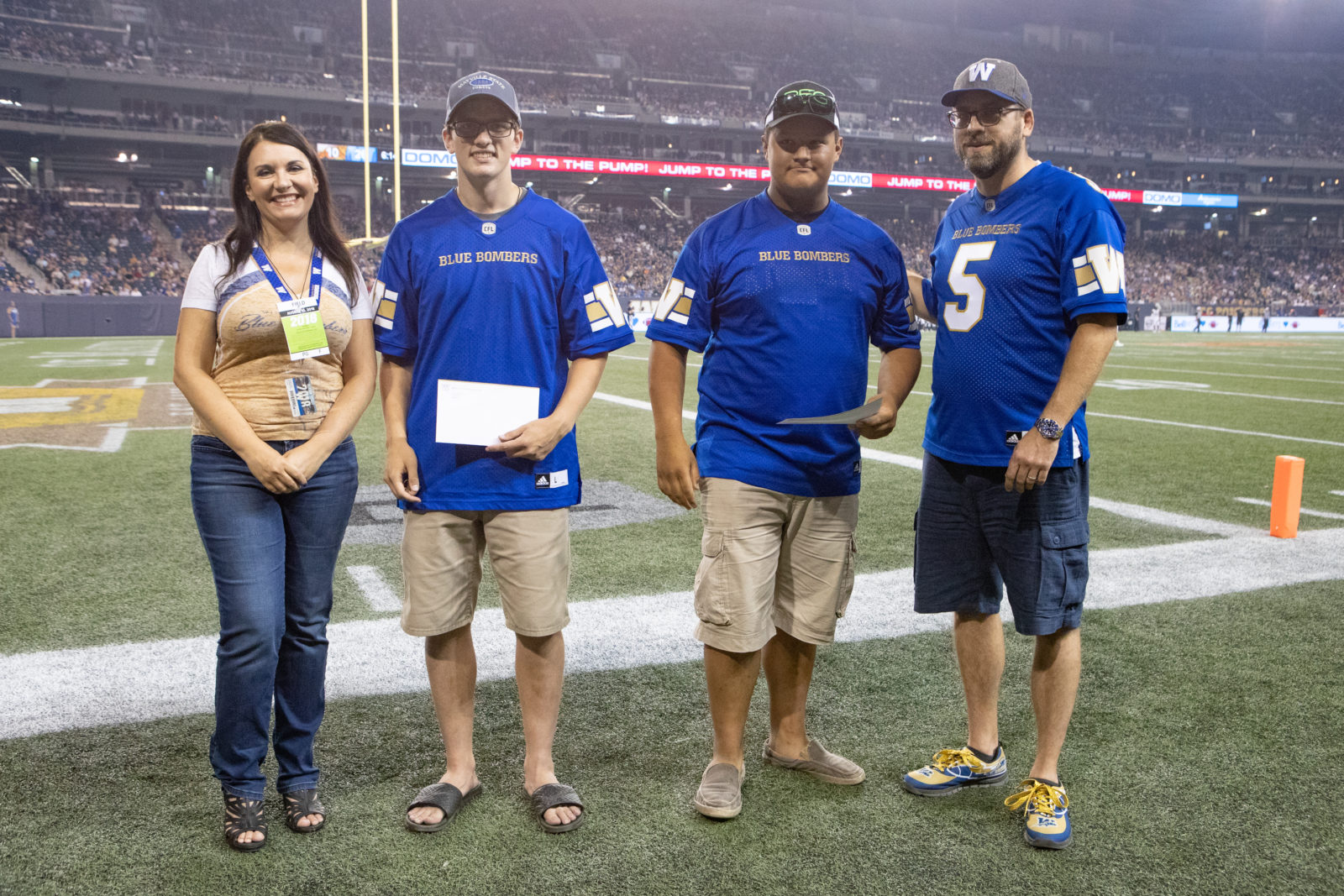 “Football really helped give me a family and team feeling and our coach, Coach Hawk (Jason Hawkins) was always concerned about our grades and that helped me with my focus,” said Baptiste. “It was always grades first, football second with coach. And for me, football was always something to look forward to after school, instead of just going home and doing nothing. It was just good physical activity. Most of all, it just felt good to be part of a team all pushing for the same goals.”

Rosser, who is Metis, is already living on campus at Mayville State and preparing for camp with the Comets.

“It is a huge honour to be chosen as a recipient for the Jack Jacobs Scholarship and I couldn’t be any more thankful,” Rosser said. “It blew me away when I found out I had been chosen and I couldn’t have been here without my parents to push me to be the best I can and without my football family from the Interlake Thunder who has taught me everything I know so far, and especially to Coach (Mitch) Obach for writing a reference letter for me and thinking so highly of me.”

A middle linebacker, Rosser was not only the Thunder’s Most Valuable Player last season, but was awarded the MFLM’s President’s Trophy as the league MVP. Coach Orbach said this of Rosser in his reference letter:

‘Joe was my first selection of four captains and he repeatedly proved me right in making that decision… Joe’s steady approach to the game was a model for others to follow. He always asked the right questions in an effort not only towards improving himself but the team around him as well. Off the field, I could count on Joe for honest advice on any issue, knowing that his focus was always on the development of our team. Every player on our roster looked up to joe for his passionate approach to the game.’

“I’ve been in love with it ever since,” he said. “That love for the game drove me to want to become a better player and that drive has shown me if there is anything I want to achieve, I will work my hardest to get it.”

Jacobs is a member of the Canadian Football Hall of Fame and Winnipeg Football Club Hall of Fame. He was a Muscogee (Creek) Indigenous person whose skills as a quarterback led to packed houses at the old Osborne Stadium and helped lead to the construction of Winnipeg Stadium in 1953 – known as ‘The House that Jack Built.’

The Bombers averaged just 4,414 fans at Osborne Stadium in 1949, the year before Jacobs arrived, while going just 2-12. But with the club improving to 10-4 in 1950 and Jacobs filling the skies with passes – he became the first quarterback in pro football to throw for 3,000 yards and 30 TDs in a season (in 1951) – the attendance doubled before the club moved into Winnipeg Stadium, then with a capacity of 15,700.

Jacobs would lead the Bombers to a record of 46-27-3 during his years as quarterback and two Grey Cup appearances, both losses, in 1950 and 1953. When the Canadian Football Hall of Fame opened its doors for the first time in 1963, he was part of the inaugural class of inductees.