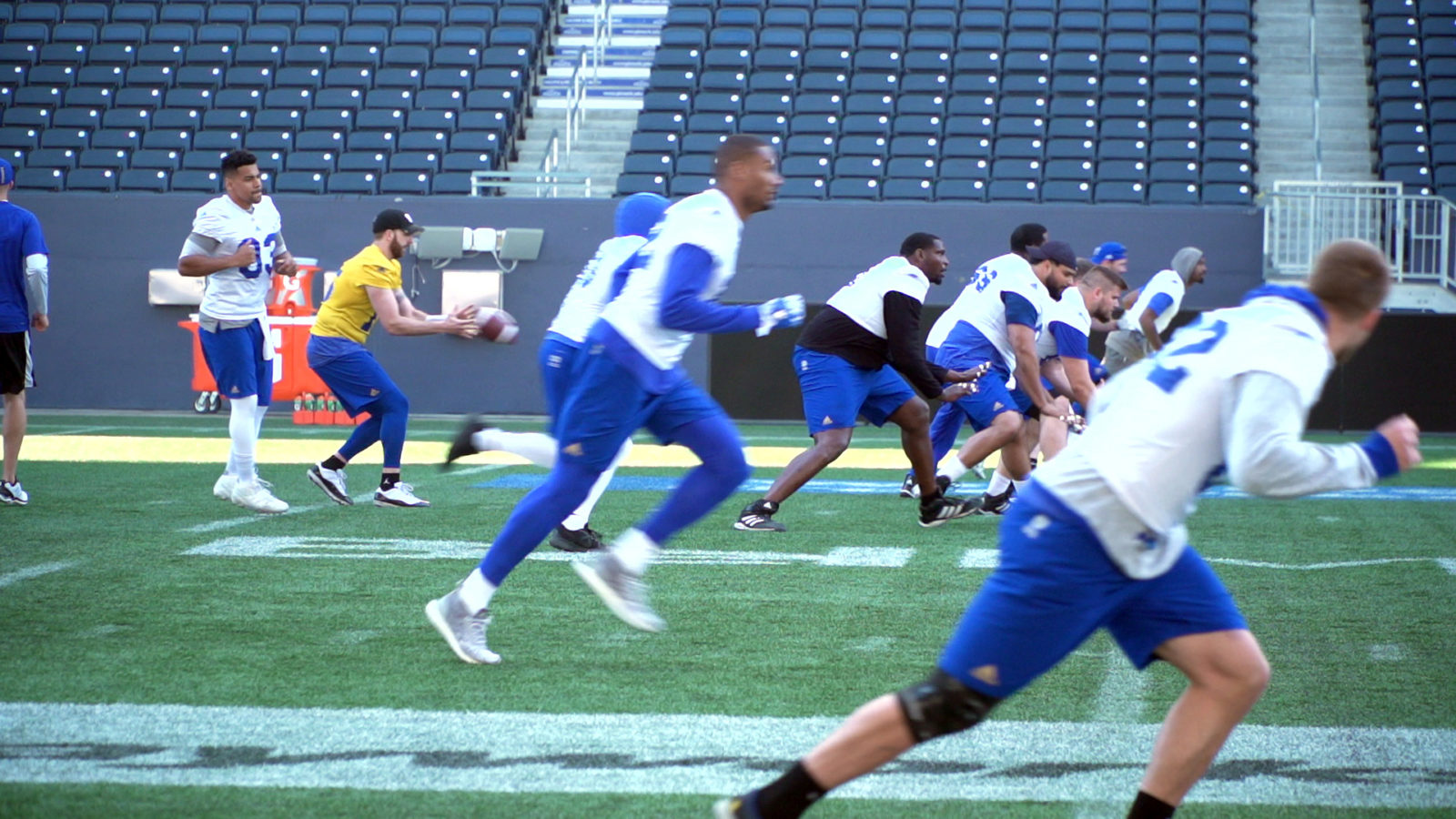 Nic Demski is holding court in the end zone at Investors Group Field and his grin is blinding on an already spectacularly sunny day at Winnipeg Blue Bombers training camp.

And with good reason, it would seem.

The Bombers are just two days into camp and a first glance at Paul LaPolice’s offence suggests Demski – the University of Manitoba and Oak Park High School product – could be all over the field in the attack as the club tries to tap into his versatility.

Thus, the size large grin on the 25-year-old’s face and a big reason why he left the Saskatchewan Roughriders in free agency to sign with the Bombers.

“That’s the main reason, honestly,” said Demski. “It wasn’t about coming home for me to come here. It was about being in an offence that is well suited for me and my versatility and what I can bring to the table. LaPo does a wonderful job of doing that with players in the past. He told me straight up he wants to use my versatility to every strength that he can. I’m with it.

“They have a gameplan for me and I’m all for that. If somebody wants to spend their energy on getting me the ball, getting me touches, getting me looks and letting me make plays them I’m with it.”

Bomber fans have been lamenting the Demski-as-a-Rider storyline ever since he was drafted sixth overall by Saskatchewan in 2015. The Bombers held the 2nd and 11th picks in that draft and, desperately needing help along the offensive line, selected Sukh Chungh second overall. Chungh started for the Bombers immediately and has been a fixture on the O-line for the past three years.

But Demski was gone with the sixth pick and, with the 11th, the Bombers dipped into the Riders backyard by selecting University of Regina receiver Addison Richards, who struggled with injuries and is now out of the CFL.

Demski’s three years with the Riders offered the occasional flash at his ability, often against Winnipeg. He had seven catches for 82 yards and a TD for Saskatchewan in the Bombers win on Canada Day last year and a punt return touchdown against the Bombers on Labour Day of 2015.

“We see the same thing we saw when you evaluated him as a draft prospect,” said Bombers head coach Mike O’Shea. “The guy is a tremendous athlete. He’s fast. He’s very quick, good feet, good hands. He’s showing that he can come in and learn the system. He’s not a surprise. Like I said yesterday with Andrew (Harris), it’s not ‘amazing’ because you got a good look at these guys, the Canadian guys, when you evaluate them for the draft and you remember them. And then when they play for another team you see what they can do… I mean, Demski scored on us. He’s a very active athlete.”

“And then when you get him in house you can appreciate some of the finer details and some of the other intangibles he may have that you don’t get to know when he’s not in your building. He’s a good football player.”

And so while the Riders and Demski moved on from each other this winter, the Bombers still see a high ceiling for the receiver/running back/returner.

“I did some good things in Saskatchewan, but at the end of the day I think I can do a lot more in the CFL,” said Demski. “I know I can do a lot more on this field. I mean when there’s a chance to come in here and it’s your spot… they basically told me it’s up to me to lose it. So I’m going to work my butt off every day and make sure that spot’s mine.

“(In his rookie year) I think I was just an athlete coming into the league and trying to get into a pro league. I give a lot of credit to Saskatchewan and (then Riders offensive coordinator) Jacques Chapdelaine for molding me into the player I am now. And now being under LaPo, he coaches us hard and tells us exactly what he wants us to do and exactly what his offence is about. It’s all about becoming a student of this game. You can be as athletic as ever, but if you don’t know the offence, if you don’t know what’s going on in the CFL scheme you can’t really do much with it.

“I’ve just been educated and use my tools to my strength now.” 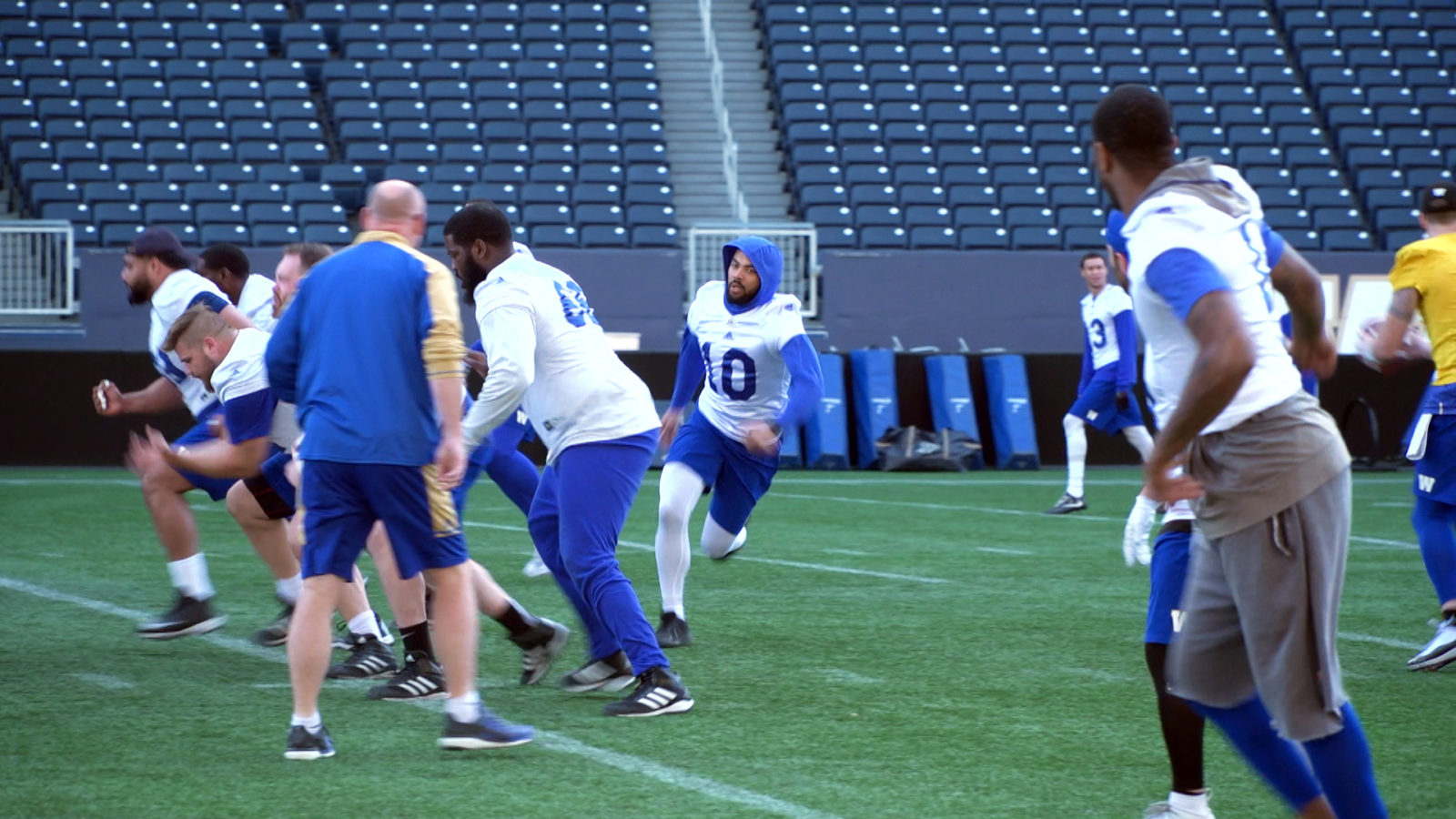 Not practising on Monday were LB/DB Maurice Leggett, RB Kienan LaFrance, WR Tony Stevens, and DE Trent Corney. And near the end of practice WR Tyrone Pierre, the Bombers fifth-round draft pick earlier this month, pulled up hobbling on a reception and limped off the field.

LaFrance, FYI, will be out at least a week.

The Bombers moved DB Zavian Bingham to the retired list on Monday.

Here’s O’Shea, talking about QB Alex Ross and how his year with B.C. last season might be helping him at this camp:

“There’s an experience level and some confidence that is gained by that, whether he threw 12 passes in games… he’s been with a team for an entire year. Now it’s just a matter of adjusting to our play-calling, our system, our playbook and the people around him. Even once you know the playbook, you’ve still got to get to know the guys around you and who you’re throwing to. But there is just a level of confidence and I said it earlier about every position: when guys come in for their second year things just slow down.”

We try to make a note on all those who make at least one stand-out play on each day at camp. Here’s who has earned a checkmark from bluebombers.com through the first two days…

STRIPED SHIRTS IN THE HOUSE:

CFL officials were in attendance at Monday’s practice to give the players a sense for the timing between plays… and watching for offside infractions. The Bombers do push-ups after every offside and procedure penalty and were up and down on a number of occasions on Monday.

“It’s great to have them here,” said O’Shea. “It’s vital that we exchange information and talk about rule changes and shoot the breeze about football in general. They like to know the nuances of the game and if anything is developing as a new concept or a new way of doing things they want to see it, too, because they want to be right on the field. They don’t want to be caught off guard and see something for the first time in a game. They’re here learning.

“I think it’s a great tool for everybody involved.”