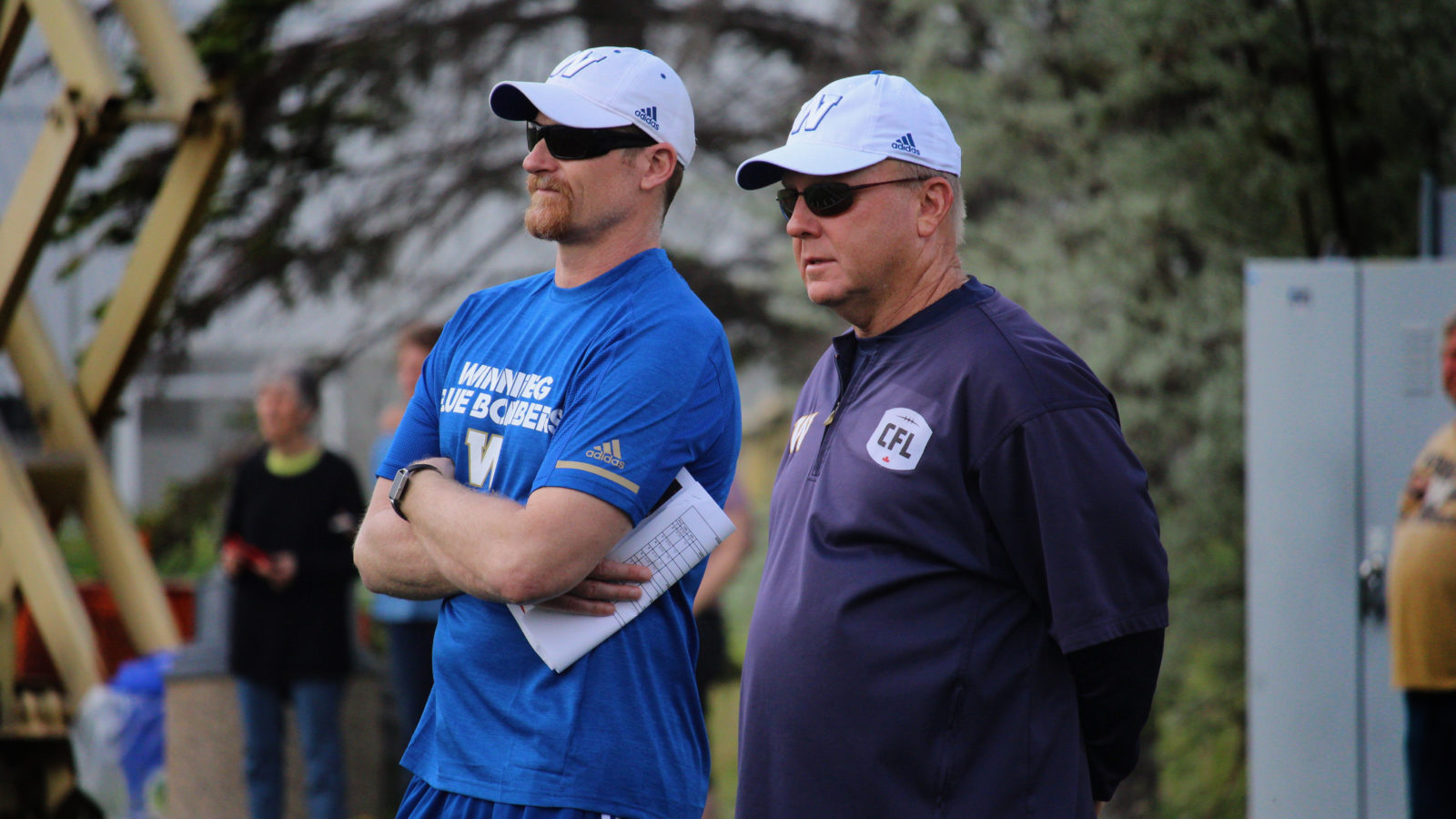 There are many, many mornings when Danny McManus wakes up, stares at the hotel ceiling while wiping the sleep from his eyes, and wonders out loud:

“Just where the heck am I again?”

Such is the life of a Canadian Football League scout like McManus, the hall-of-fame quarterback who now does his talent sleuthing for the Winnipeg Blue Bombers as their Assistant GM/Director of U.S. Scouting. Yes, the search for new talent means McManus and the Bombers’ scouting staff cover miles upon miles of territory down south while trying to unearth new talent like the players discovered last year at free agent camps in Brian Walker, Brandon Alexander and Jovan Santos-Knox.

Bluebombers.com caught up with McManus last week during a particularly crazy stretch of travel and in advance of the first Bombers’ free agent camp of the winter in Pensacola, FL on Saturday (Ted Goveia, the Bombers’ Assistant GM/Director of Player Personnel will be at a camp at Costa Mesa, CA on Sunday).

What follows is the first of two stories outlining how the free agent camp process works, followed by the experience Santos-Knox had last year before signing with the club.

ON THE ROAD AGAIN..

“Right now I’m driving home, washing some clothes, and then heading back out,” began McManus, the sound of the Florida highway rolling by in the background. “Ted and I were in Dallas for the College Gridiron Showcase. Then I’m in Daytona for the Tropical Bowl (held last Sunday), then it’s wash the clothes again before the East-West Shrine Game, followed by the Senior Bowl.

“And then we’ve got the four free agent camps in January.”

In addition to the camps in Pensacola and Costa Mesa this coming weekend (details here) the Bombers will be staging events in Jackson, MS and Atlanta, GA next weekend. The club will hold up to 10 more camps right through April when training camp rosters begin to solidify.

And the goal is simple: To continue to stockpile the Bombers’ roster with American talent and in the process, hopefuly find the next Milt Stegall, Charles Roberts, Chris Matthews or Maurice Leggett.

“You’re looking at guys who were passed over or were maybe at small schools and didn’t get a chance to show anything at their pro days,” McManus explained. “It could be a guy who was in the NFL and got injured and is looking to get back into the game after taking some time off to recover. Maybe it’s a guy we liked at NFL camps who got off the board a little bit and we want to have another chance to see him again.

“You never know why a guy is not playing football, but you want to give him every chance to show that he can play and provide him with the right opportunity.”

The Bombers have held some camps where as few as 10 players show up, others where the number of prospects totals up to 70. They will send out camp information to all the prospects they may have seen or were unable to get to within the last year, and also rely on their contacts in football and agents to get the message out to their players. McManus and Goveia also lean on the Bombers’ social media accounts to make sure the camp details reach as many prospects as possible. 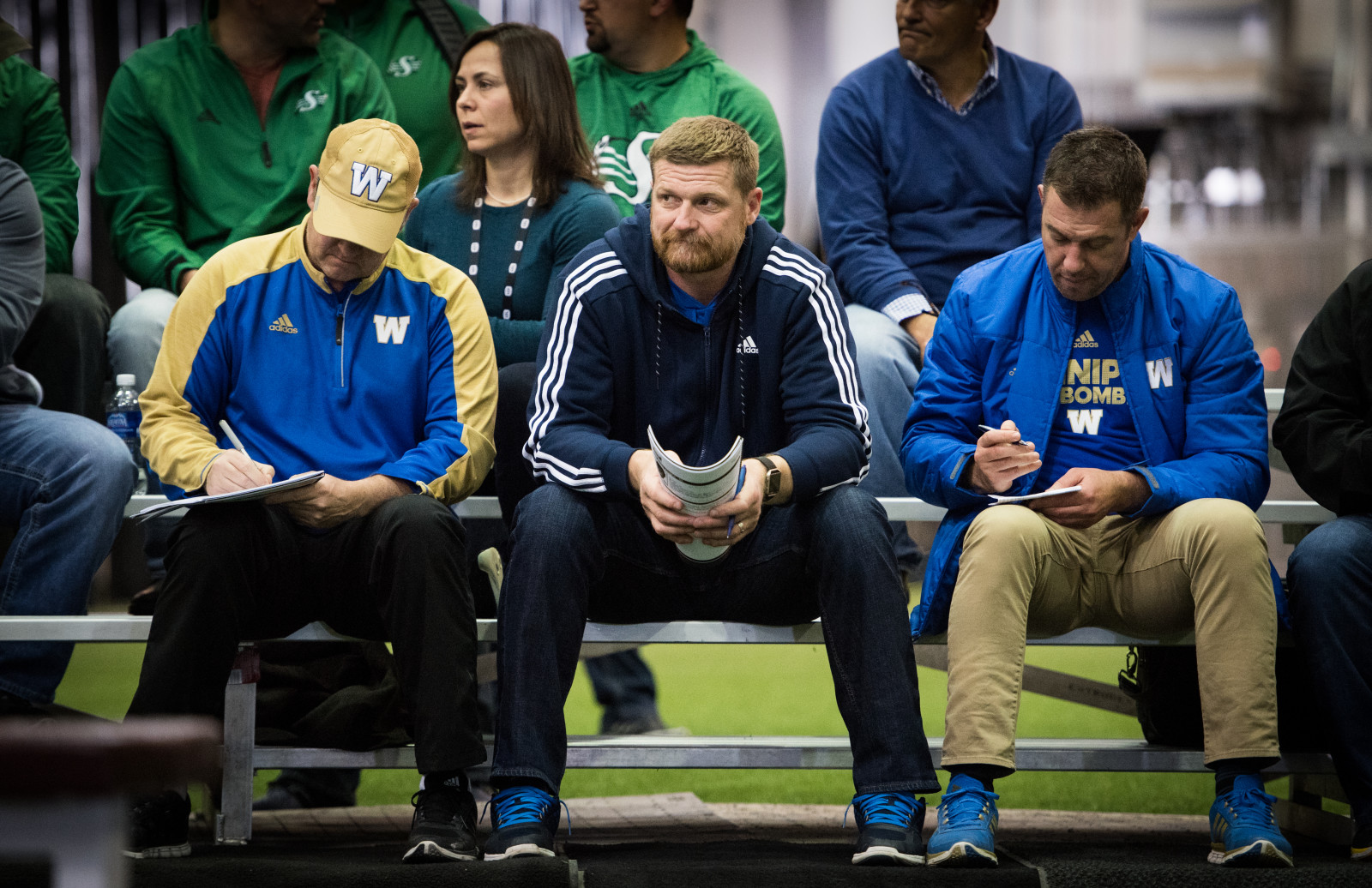 FOR ONE BEN FRANKLIN…

Players reserve their camp spots in advance by contacting McManus or Goveia and then need only show up on shorts and cleats –the workouts do not include hitting – and plunk down $100 for the camp.

McManus, who began his playing career with the Bombers and spent 17 years in the CFL pitching footballs before retiring, also works his network to make sure at least one quarterback is in camp.

“Otherwise,” he added with a chuckle, “you know who will be throwing: It’ll be me. And I was good once, but I’m not good any more. You’ve got to have good quarterbacks to have a good workout.”

A Bombers free agent camp will feature the standard testing drills like a player’s time over 40 yards and short shuttle before some positional drills. The camp ends with one-on-one sessions.

“You get all kinds of guys,” said McManus. “You get guys who haven’t played in five years but heard about the camp and want to come out and see if they can take one more shot at glory. A couple years ago in Los Angeles we had a father and his son come out. The son didn’t want to do it, but the dad said, ‘I’ll do it with ya’ and they both came out.

“But once they get to the camp Ted and I want to make sure they get a very good three-hour workout. We don’t want anybody wandering away from the workout saying, ‘They didn’t take a look at me.’ We enjoy it. We enjoy coaching the guys up. We enjoy the PR part of talking up the Canadian Football League and the Winnipeg Blue Bombers. We also invite alumni living in the area to come out to the workout and help us. In Atlanta, for example, James West and Milt Stegall will come out. It’s good for those guys, too.”

The Bombers will work out hundreds of prospects during their free agent camps and in some cases, will immediately put a player on their negotiation list – meaning they would own his CFL rights – with a quick call to CFL headquarters before the camp is even completed. Follow-up legwork after a camp would include watching more film of prospects or requesting full game tapes before the club’s coaches are involved to study the tape and provide their evaluations.

After that, players who have stood out will be offered a contract and invited to mini-camp, with the staff ensuring they have a proper passport and paperwork to cross into Canada.

“At that point,” McManus explains, “the player really has his shot to impress us.” 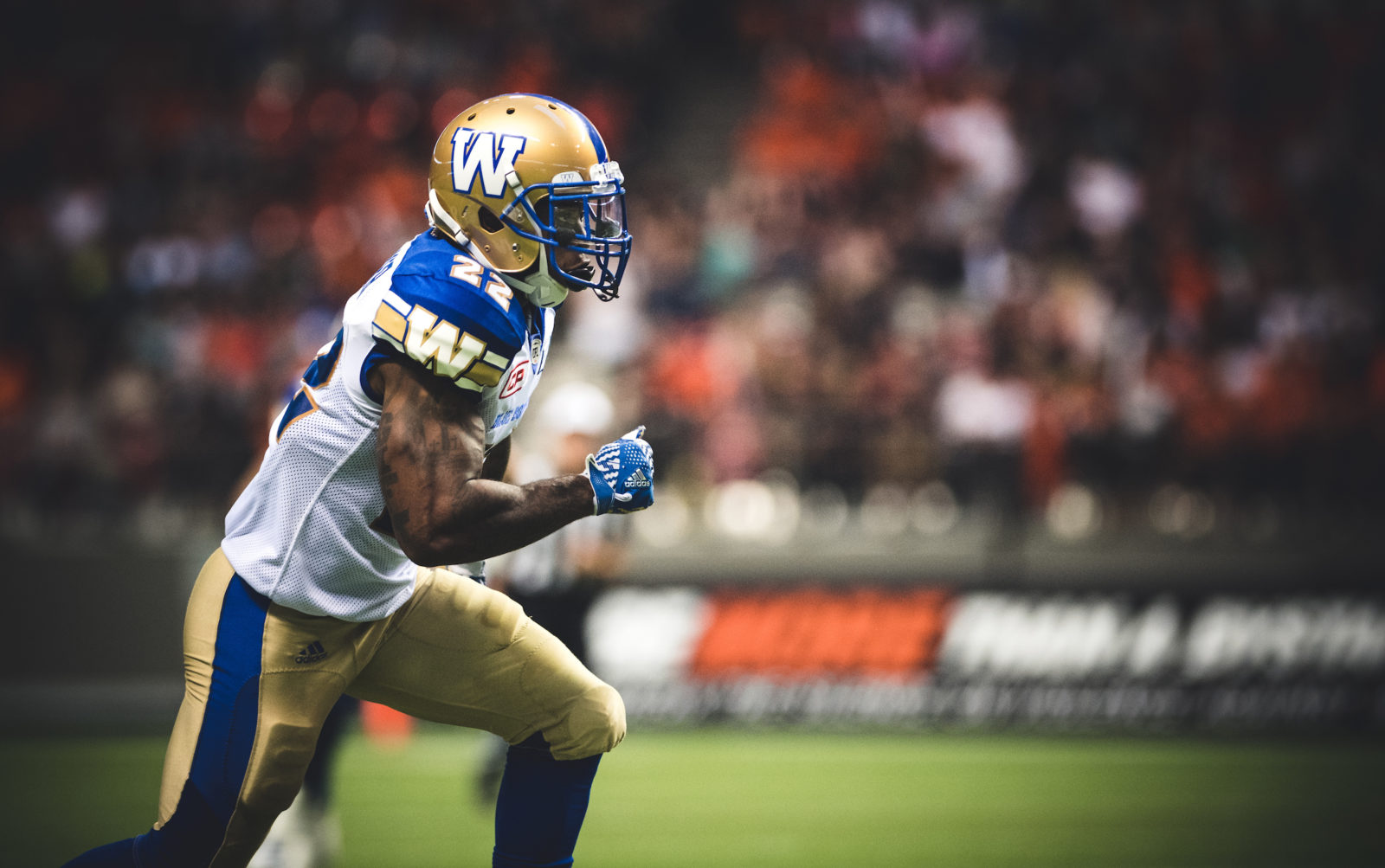 POPPING OFF THE PAGE…

The Bombers found Walker, Alexander and Santos-Knox – all of whom were starters on defence last season – at their camps last winter, along with former Saskatchewan Roughriders receiver Ryan Lankford. And, much the same way free agent camp legends like Cameron Wake, Delvin Breaux, and Leggett did before them, the keys to popping off the page for talent evaluators is simple.

“Show something early,” McManus said. “Whether it’s your 40 time or your short shuttle… do something that gets Ted and I excited or has the guys helping us come over and say, ‘You need to take a look at this kid because he did this over here…’ Then in your positional drills it’s important just to be able to do what is asked of you. Can you listen? Can you be coached? We put them in some difficult situations to see how they react.

“Then we finish the workout with one-on-ones to see the competition. Do they rise up and compete or do they sit at the back at the line and not want to compete and try and rest on their (testing) numbers?

“Brian Walker was a guy who really popped off the page at a camp last year. In his case, he kept jumping up the line and wanted to get more reps. That’s what I would advise: don’t be a coward or sit at the back because then you’re cutting yourself. Jump up there and show what you’ve got. If you have four good reps and one bad rep, we’re probably going to remember at least two or three of the good ones and maybe forget about the bad one.”

As much as the search for new talent can be exhausting – if this is Saturday, I must be in Biloxi – it’s what bird-dogs like McManus and Goveia call their passion.

“Ted and I, we both love the chase,” McManus said. “We love the chase of trying to find a player. The guys that get drafted in the NFL and CFL, that’s easy because they can’t go anywhere. But the player that everybody had a shot at and was passed over and comes and plays for us… those are the guys that make it worthwhile.”

And when a player they find at a camp signs a contract and makes the team, it comes with a promise from the club: the $100 camp entry fee is handed back to them.

“There’s nothing I like more than going up to a guy during camp or in the season and handing him $100,” McManus said. “Usually the reaction is, ‘What’s this for?’ We’re not there for the money. We’re there to find players that can help us.”

Next: Jovan Santos-Knox: from Connecticut to North Carolina to Manitoba