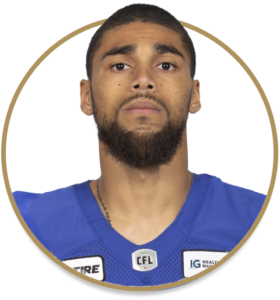 Lawler led the Bombers in receiving yards in his first year with the club, finishing with 637 yards on 41 receptions and adding four touchdowns. As a result, he was named the club’s Most Outstanding Rookie Player. He started 16 regular-season games for the club, as well as the three playoff games in which he added eight catches for 126 yards — including a 26-yard TD in the Western Final.
Lawler was first signed by the B.C. Lions in May of 2018 and attended their training camp before being released. He was added to the Bombers practice roster on October 22 of 2018 and re-signed on December 4th.
Lawler signed a one-year contract extension to remain with the club on February 3, 2021.

Lawler was selected in the seventh-round draft , 243rd overall, by the Seattle Seahawks in the 2016 NFL Draft and spent time on their practice squad in 2016 and 2017. Lawler played three seasons with the California Golden Bears, catching 143 passes for 1706 yards and 27 touchdowns before entering the draft after his junior season.