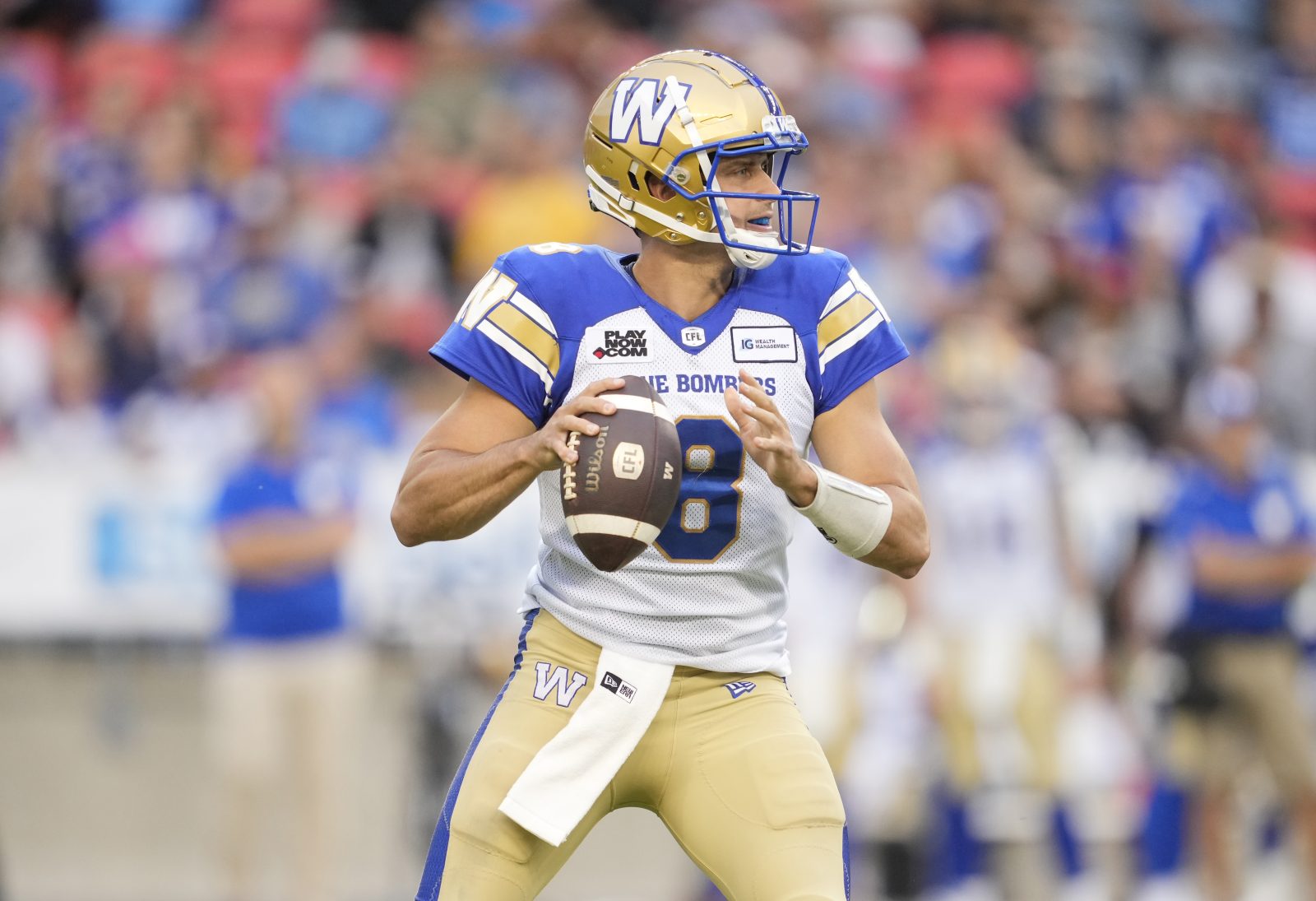 Winnipeg Blue Bombers quarterback Zach Collaros looks for the pass during the first half of CFL football action against the Toronto Argonauts, in Toronto, Monday, July 4, 2022. THE CANADIAN PRESS/Mark Blinch

Two distinct schools of thought have emerged on the Winnipeg Blue Bombers 4-0 start, even with the acknowledgement that things are seldom this black and white in the Canadian Football League.

The Blue Bombers, even unbeaten, are hardly the same squad that regularly rolled over opponents last season en route to a second consecutive Grey Cup. They are not running the ball as effectively as they once did with Andrew Harris and are giving up too much yardage defensively.

It’s July. Take a chill pill and enjoy the victories, no matter what they look like.

Here’s the view from this perch, for what it’s worth: there’s merit to all the narratives in the first camp, but there are some nuances that have yours truly in the second school of thought and stepping back to look at the 4-0 start with a wider lens.

Consider this: the Blue Bombers are unbeaten without getting a single snap this season from their dominant all-star safety Brandon Alexander, who is recovering from offseason surgery.

They are unbeaten with centre Michael Couture having missed the last 2 ½ games with an arm injury and, as a result, now have two changes up front with Chris Kolankowski in the middle of the O-line and Geoff Gray at left guard for Drew Desjarlais, now with the New England Patriots.

With Alexander out and Malcolm Thompson filling in so capably at safety, they are also unbeaten without Mercy Maston at dime back after he suffered an Achilles injury in camp and has been replaced by the promising Donald Rutledge, Jr. 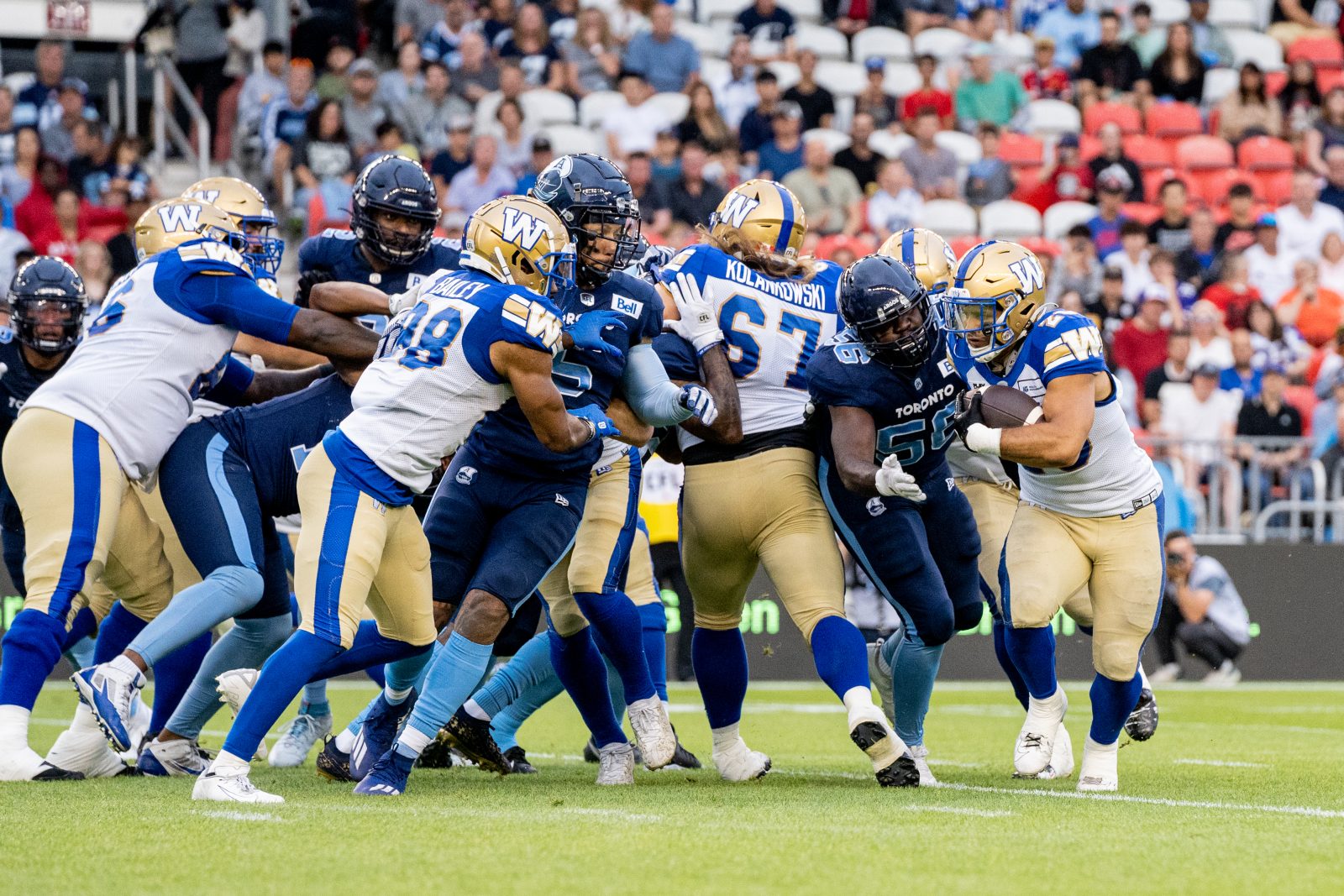 There are also two new receivers in Greg Ellingson and Dalton Schoen, a new tailback in the Brady Oliveira/Johnny Augustine/Greg McCrae trio working to replace the production of future hall of famer Andrew Harris.

And now the club could be without uber-underrated linebacker Kyrie Wilson, who had to be helped off the field in Monday’s victory and was seen in a walking boot on the sidelines after. An official report on his injury likely won’t be available until Thursday, but there is already speculation the injury is serious.

So, given all that – and the daunting chunk of their schedule they are in that will see them play five of six on the road, including this week’s ridiculous turnaround that had them in Toronto on Monday and Vancouver on Saturday – the 4-0 start, it says right here, takes on a whole new meaning.

Let’s also consider this: even with their inconsistencies, what the Blue Bombers have flashed week in/week out so far this season is both their championship pedigree and their star talent and depth.

It’s Zach Collaros being careful with the football and delivering strikes when it matters; it’s Willie Jefferson making a difference in last week’s win over Hamilton, followed by Adam Bighill doing his thing in Toronto; it’s new receivers Greg Ellingson and Dalton Schoen developing a chemistry with Collaros; it’s kicker Marc Liegghio being a perfect 10-for-10 on field goal attempts and the special teams units effectively doing their thing.

Again, it’s not pretty – yet – but there is still a ton of highway to travel between now and when the games really matter in the fall.

THE BLUE BOMBERS DEFENCE… surrendered 398 yards, including 111 along the ground by Harris, but also forced four turnovers, including a Pick-6 by Winston Rose to open the scoring, an interception by Nick Taylor, a stop on a third-and-short and this crazy turnover at a critical moment near the end of the third quarter.

WHAT IS HAPPENIN'! @TorontoArgos on the doorstep, but the @Wpg_BlueBombers defence has other plans! #CFLGameday pic.twitter.com/Pj6pGmO9VC

“As I came out there and the ball was loose, and I jumped… I was getting hit by the receiver as I had the ball,” explained Bighill. “I didn’t know who it was right there (Malcolm Thompson), but I saw white and so tried to give an alley-oop – I don’t know what it looked like on film – but I flew and hit the ground. I couldn’t see the finish on the play, but it was kind of crazy.”

“That was an unbelievable play by Biggie. Watch it closely… I really haven’t seen much like that. I’m pretty sure Biggie dove, caught it, pitched it immediately before he hit the ground.”

There could have been more, too, as defensive tackle Cam Lawson had his mitts on the ball after a pass deflection – and huge chunks of real estate in front of him – but couldn’t quite squeeze it.

“Our defence took the ball away pretty good, and we also probably had some other opportunities we would have liked in the takeaway category,” said O’Shea. “But we did enough. That’s what matters and the offence drove down after one of them.

“The defence not only was giving the ball to the offence and trying to score points but taking points off the board right down there on the goal line. To me, that’s just as good as scoring off one because they were right there on the doorstep.” 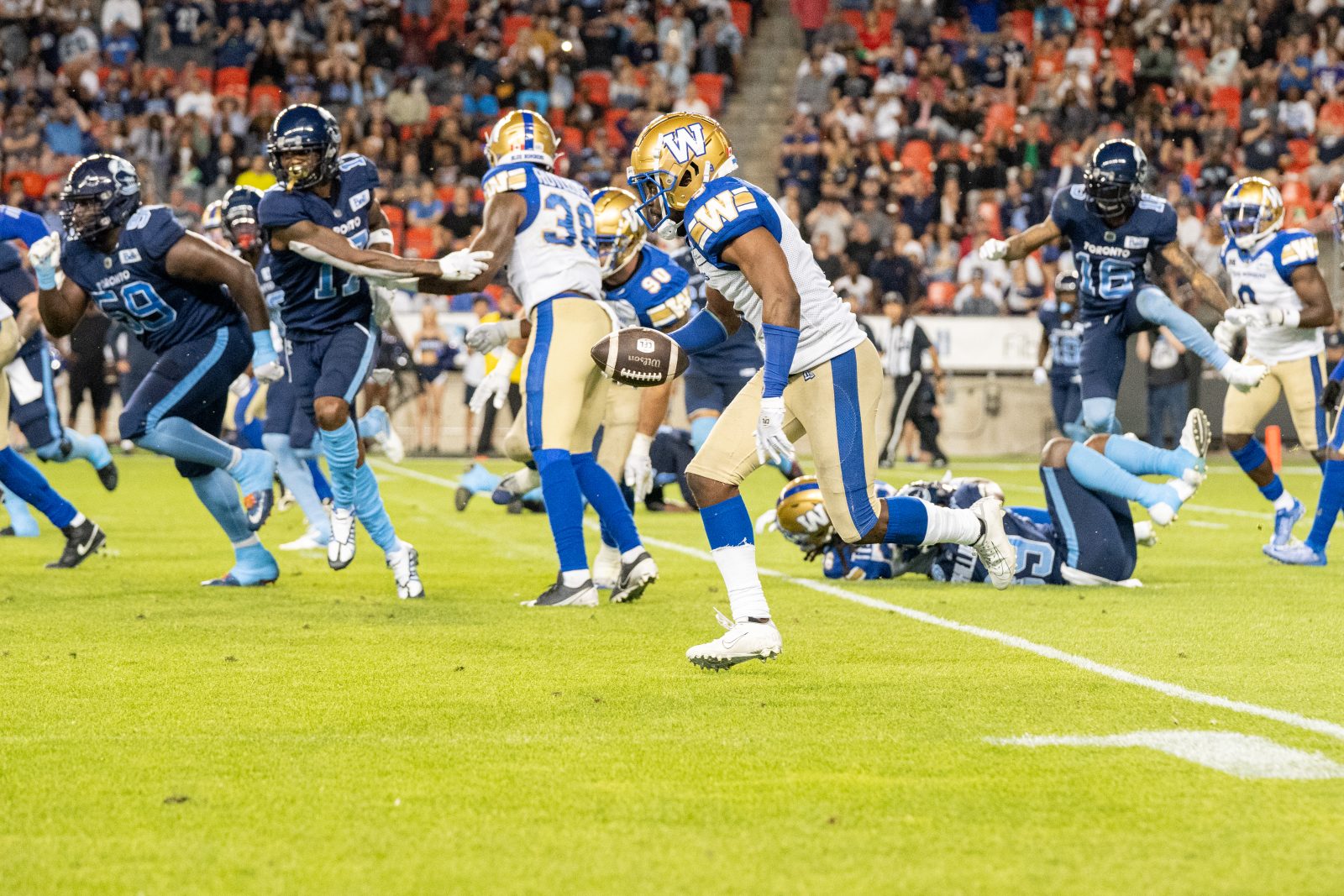 ONE OF THE WACKIER PLAYS IN A GAME THAT HAD A FEW… was a touchdown by Brandon Banks early in the third quarter that helped bring the Argos back to life.

Blue Bombers cornerback Demerio Houston looked like he had intercepted the pass at the goal line, only to have the ball snatched away by Banks for the TD.

HIGHWAY ROBBERY, and the Bank(s) is OPEN for business! 👀💰@speedybanks87 takes what’s his for the @TorontoArgos TD!#CFLGameday pic.twitter.com/onszOuwgzP

The play was reviewed by the CFL’s command centre, but even after watching it a few times it could certainly be argued that it also looks like an interception.

“If anything, I was going to challenge down by contact,” said O’Sea “But they said they looked at that and said the ball was still loose, so he’s not down by contact because he didn’t have possession.”

POINTS OFF TURNOVERS ARE ALWAYS A MASSIVE… key to victory, and in a game in which the Blue Bombers won by the slimmest of margins and finished +3 in the takeaway-giveaway department, Collaros was lamenting afterward that the total wasn’t higher.

“When the defence creates that many turnovers and they score a touchdown, the game shouldn’t be as close as it was,” said Collaros, who finished the night 25 of 31 for 215 yards with a TD strike to Drew Wolitarsky and one interception. “We have to be better.” 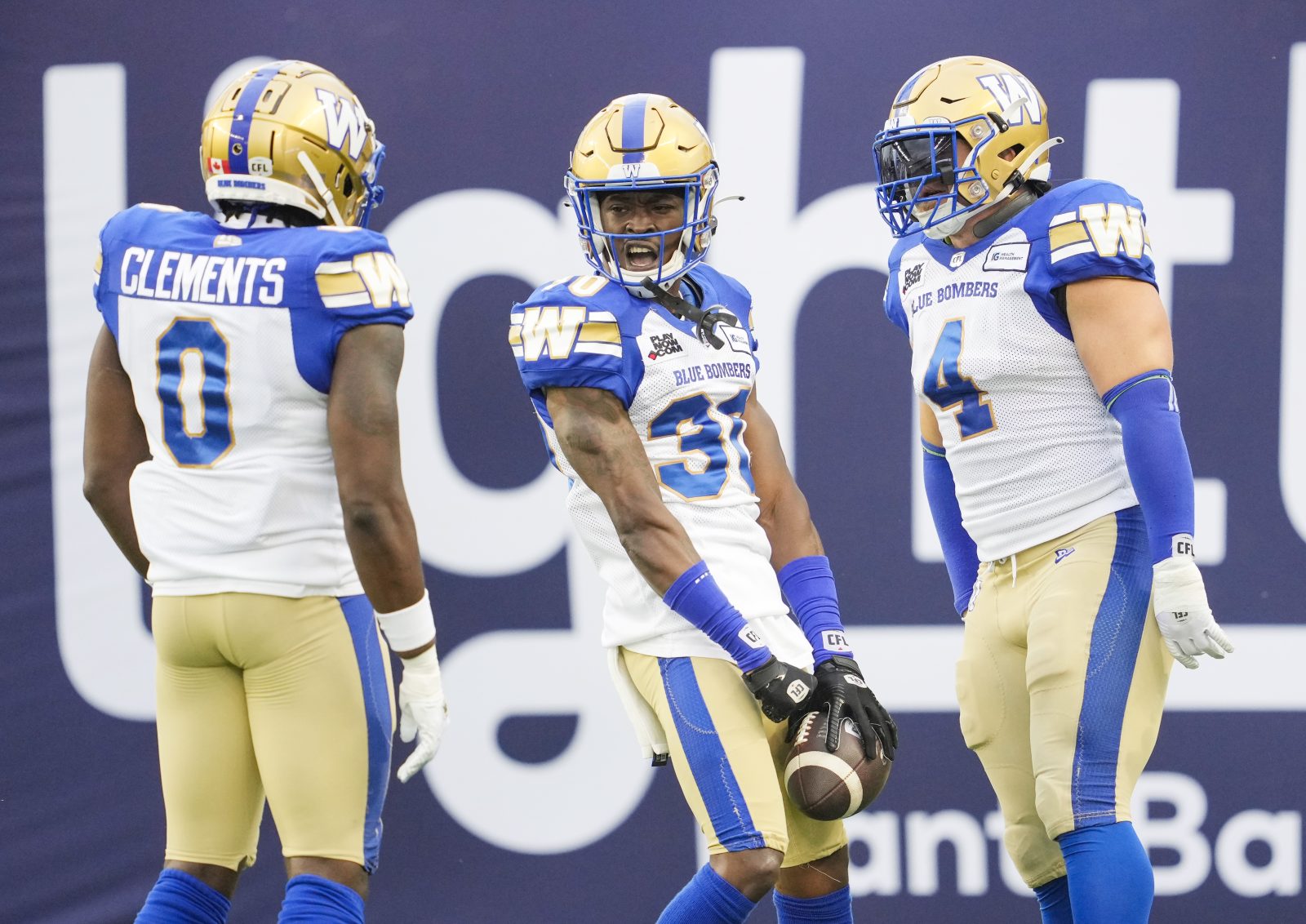 THE PICK-6 BY ROSE WAS THE LATEST CHAPTER… in what had been a tough start for the veteran corner. Rose was very candid about his play in a conversation we had with him earlier in the week saying, “The first two games were not up to the standard I have put on tape previously. I’m definitely a harsh critic of myself and my brothers hold me to a high standard and what I’ve displayed has not been up to my standard.”

Rose certainly looked more like his former all-star self on Monday in Toronto.

“It was nice to see him play that way and get rewarded for hard work and rehabbing hard, too,” said O’Shea. “Once he re-habbed he was feeling good in practice. He knows who he is.”

“Honestly, man, it was one of those things where I felt like I had a monkey on my back and I had to shake him off me or get him off me,” said Rose after the game. “A game like (Monday) was definitely needed and kind of me got me back in line with what my team and coaches know I can do.” 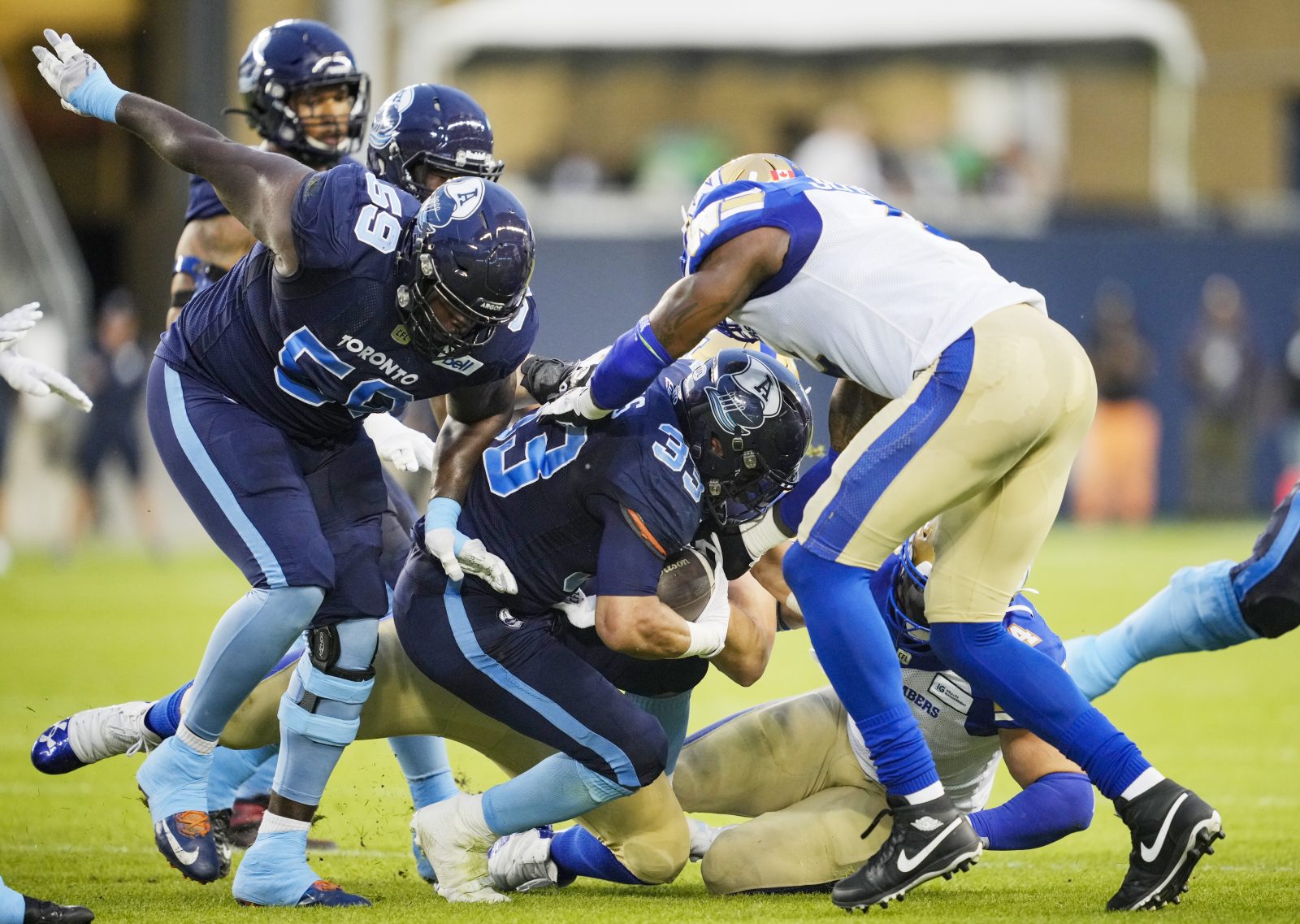 THE TALK ALL WEEK LEADING UP TO MONDAY… was about Harris facing his old teammates. The veteran RB certainly showcased he has game left in his tank.

His full post-game interview can be seen here, and he spoke of facing Bighill, a former teammate with both the B.C. Lions and Blue Bombers.

“Bighill’s a dog out there,” said Harris. “He’s the ultimate competitor. He got me a couple of times, I got him a couple of times and it’s exactly how I figured it was going to go. Tons of respect for him and that whole D-line and linebackers. That was a lot of fun, for sure.”

“It was fun,” added Bighill. “We know Andrew is a competitor. Me and him had some good chats and some good collisions tonight. Neither of us would have wanted it any other way – a physical, smash-mouth game where we’re both putting it all on the line and letting it hang.”

AND, FINALLY… the potential impact of the injury to Wilson could be massive to a defence already dealing with injuries.

“That’s why you have teammates,” said O’Shea. “Everybody in our locker room is going to help us win football games this year. (Wilson) is a terrific football player.”

“Malik came in and did a great job,” said Bighill. “We had Les in for a little bit, and he did a good job. Kyrie is just one of the best football players in this league. I think he’s a great player… you could play him anywhere and he can play good football. So anytime you lose great football players it’s never easy, so we’ll see where things go.”