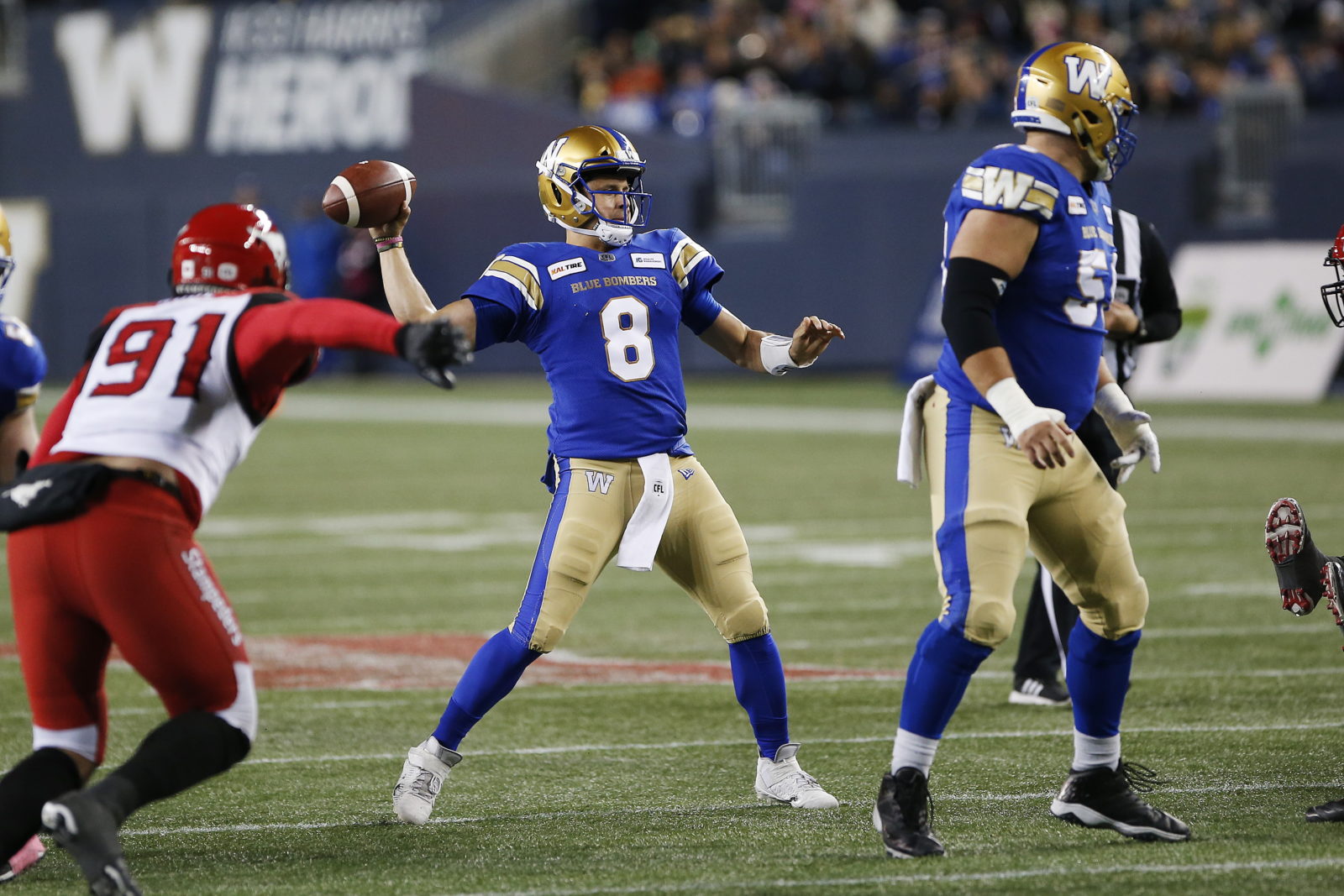 Winnipeg Blue Bombers quarterback Zach Collaros (8) throws against the Calgary Stampeders during the first half of CFL action in Winnipeg Friday, October 25, 2019. THE CANADIAN PRESS/John Woods

The Winnipeg Blue Bombers championship run last November is already folklore in these parts thanks to the compelling characters and storylines that were part of the heart-racing moments leading up the historic finish.

The story has already been told in book form – and, yes, that’s an obvious and shameless plug for our ‘For the W: look back at the championship season’, available at The Bomber Store.

Still, what often gets glossed over are the smaller moments that helped shape the big picture – those critical and timely plays that, collectively combined, make a champion, whether they come on offence, defence or special teams. Over the next few weeks, www.bluebombers.com will dig a little deeper at 10 signature plays from last fall’s run that, given the benefit of hindsight, were massive in the club’s 11th Grey Cup championship.

The Canadian Football League’s official statistics report for Game #83 of the 2019 season simply lists it as play #121 – an eight-yard completion from Zach Collaros to Darvin Adams for a touchdown.

Yet, rewind to last October and the Blue Bombers’ last regular season contest against the Calgary Stampeders and the Collaros-to-Adams touchdown is certainly bigger than what is spelled out in the black and white of the statistical summary.

It was a play that provided immediate hope in that moment, and a hint of the promise that was to come. And, besides being a play-of-the-year candidate, it also offered a glimpse of the different dimension Collaros could offer the Bombers’ offence.

Watching the play again – and again, and again – Collaros began in the shotgun, stepped up in the pocket, dropped back and rolled right, then circled to his left, rolled right again and as he headed to the sideline, unloaded a pass on the run from the 24-yard line to Adams, who deftly managed to keep two feet in bounds while latching on to the ball about five yards from the back of the end zone.

It was, in a word, magical.

It’s also a play in which Collaros says he missed on the initial read.

“That play probably would have been over in 2 ½ seconds if I had just thrown the ball to Drew (Wolitarsky),” said Collaros, with a chuckle, when asked to relive the moment. “And Woli would have walked into the end zone.”

“The play broke down, I remember,” added Adams, “and when that happens it basically just turns into a scramble play. All I’m trying to do then is get open for Zach. At that point that’s the only thing you can try to do. We had a lot of ‘Wow’ plays with Matt Nichols and Chris Streveler. But for that to be Zach’s first start for us and in front of our crowd… he not only won the fans over, he helped make things feel a little better with Matt being hurt.”

Collaros had been acquired by the Bombers in a deal with the Toronto Argonauts just prior to the CFL trade deadline 16 days earlier and hadn’t taken a snap since a vicious head shot in the season opener back in June.

But with Nichols out for the season and Streveler hobbling after a heroic effort in a loss in Calgary the week before, the Bombers gave Collaros the starting chores with the team having dropped four of its last five games. 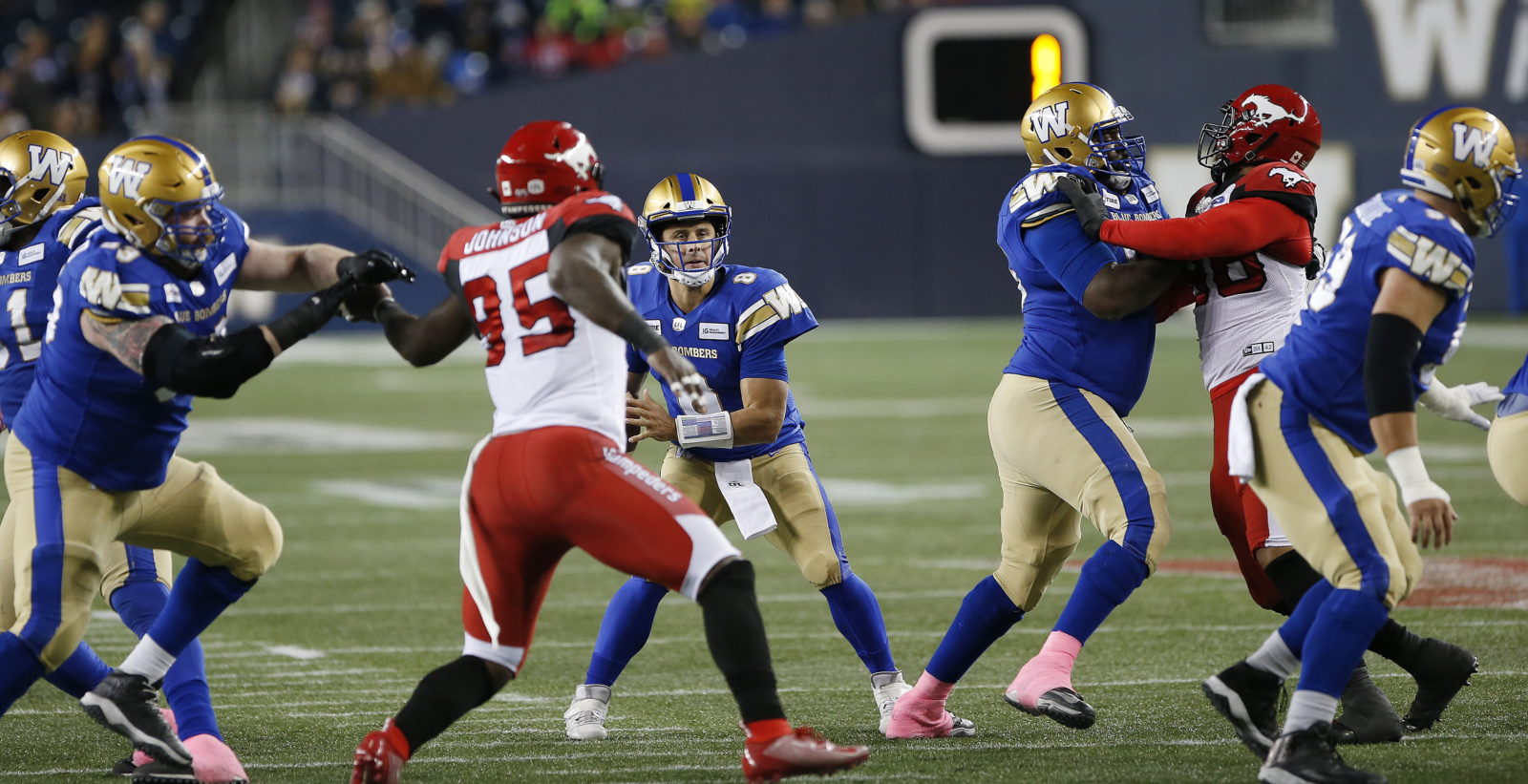 Earlier in the week Collaros – as much a student of the game as anyone in the CFL – met with then-offensive coordinator Paul LaPolice to go over some options in second-and-medium situations. He suggested the Bombers make a tweak to the play that was ultimately called, where Wolitarsky’s route would take him to a spot cleared after Nic Demski ran his own route.

“And that’s what happened on the play – Drew was wide open,” said Collaros. “You always remember the end result, but that’s actually what sticks out to me about that play. The next day LaPo and I are looking at each other laughing. He said, ‘You’re the one that wanted this play….’

“Anyway, it worked out for us.”

That score, coming with just over eight minutes remaining, pulled the Bombers to within a field goal at 28-26. Two defensive stands in the final minutes gave Winnipeg one more opportunity and with IG Field still buzzing from the Collaros-to-Adams score, the veteran pivot then drove the club 38 yards in the final 121 seconds – including two third-down conversions – before Justin Medlock’s game-winning 34-yard field goal and a 29-28 victory.

And suddenly, the vibe about this team had shifted going into the postseason.

“It was a play the Bombers hadn’t really had in a while, where you see a quarterback run around behind you and throw it up and get a great catch,” said Bombers guard Pat Neufeld. “That was a play where we thought, ‘Wow… we can actually do that now.’ It was such a big play for us confidence-wise, knowing that Zach could extend a play and being as accurate as he was he could get a ball into a tight window.

“It was Zach out there just making a play. A lot of quarterbacks would have thrown it away. For whatever reason he felt he could make a play for us. It’s funny, we always felt we were on the brink as a team. That was the moment where it was like ‘Wow… that’s the guy who was an MOP candidate and took a team to a Grey Cup before.’ “ 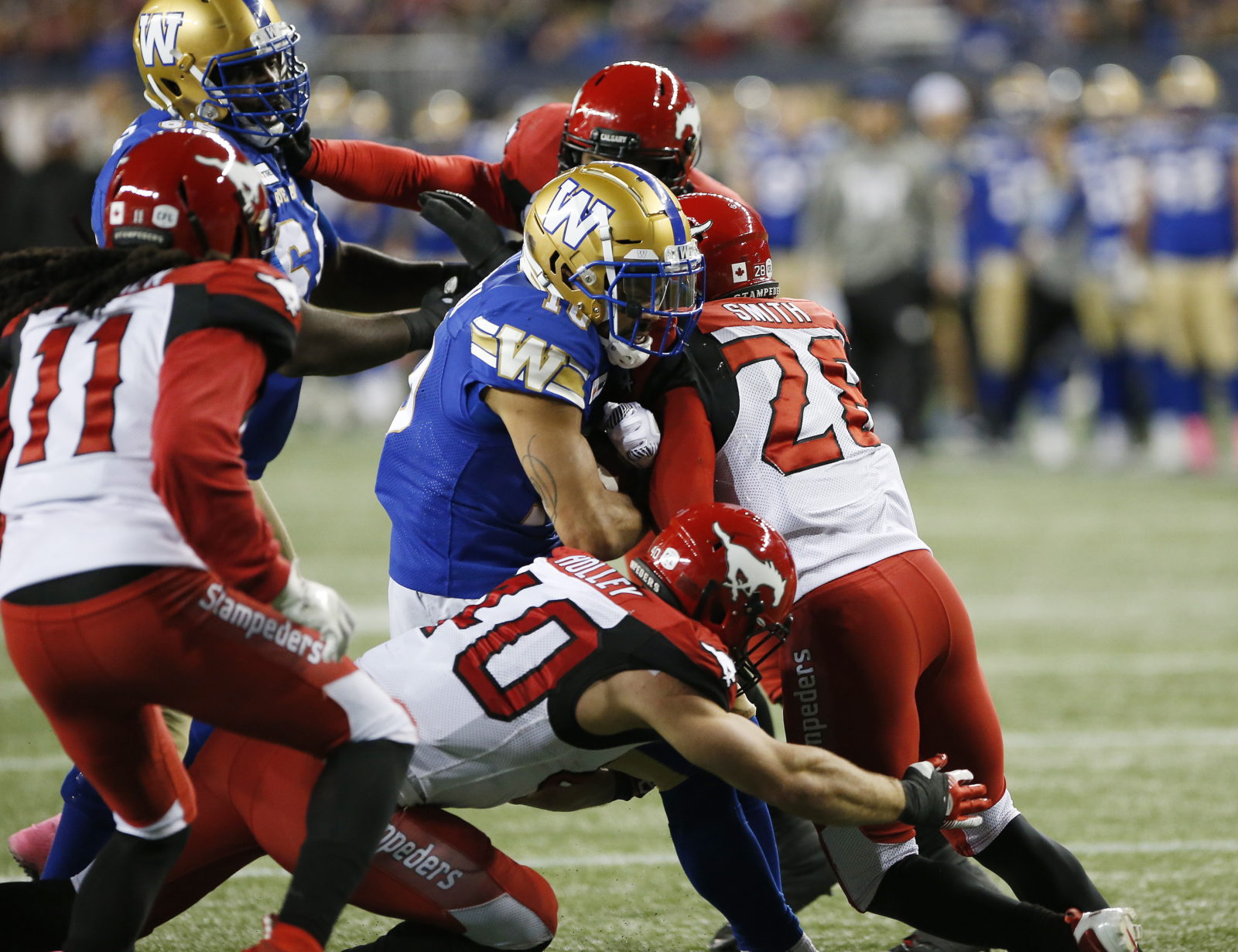 That play – and the game-winning drive later – did more than just put some jump back in the Bombers’ step as they headed into a bye week before the playoff run began in Calgary with the West Semi-Final.

It re-energized Collaros, too. And we all saw what happened in the weeks that followed.

“Any time you haven’t played in a long time, whether it’s coming into training camp and it’s your first regular season game or especially coming off an injury and you make a play… at the time you don’t think anything of it, but when you look back it’s, ‘OK, I can still do this,” he said.

“It was like ‘I can still extend plays like I always have.’ That’s always been part of what has gotten me by in my career, whether it was high school, college or professionally. My old coach, (former Ticats offensive coordinator0 Tommy Condell), told me, ‘You’re not a runner, you’re an extender. You extend plays and you find guys out of the pocket.’ LaPo told me before the Grey Cup, ‘You’re still the best off-schedule quarterback in this league. So do your thing.’

“It was a validation, in a way,” Collaros added. “There were so many things that happened in that play that you notice now because you watch it so many times. But that catch… that unbelievable awareness by Darvin. There’s also Nic Demski coming in and setting a screen on a defender in the back of the end zone to shield him from the ball. There’s a lot of guys doing their job on that play at a high level.”

And a whole lot of magic from the man pulling the trigger.