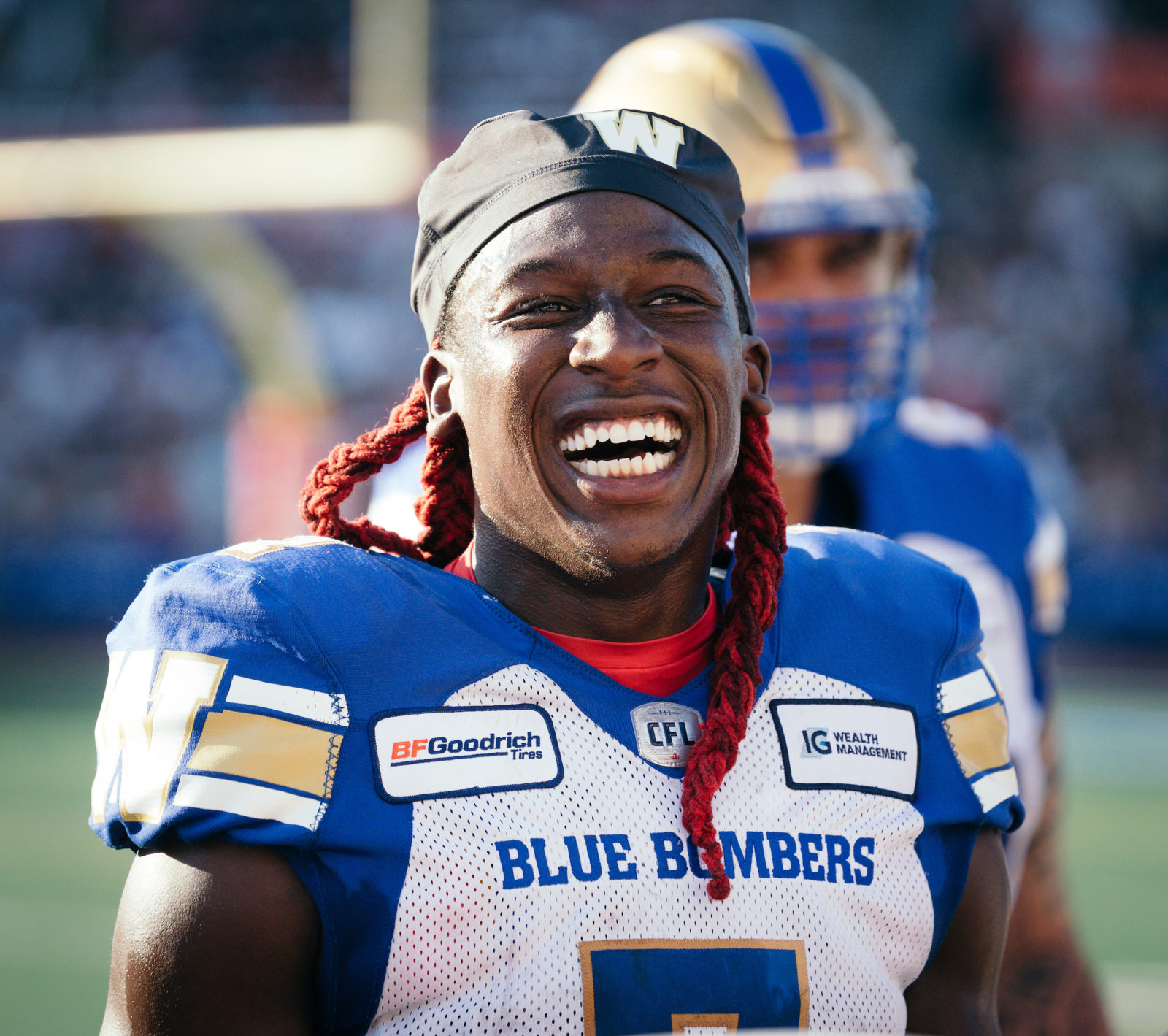 Lucky Whitehead is down on all fours, his fingers scraping at the ground in front of him, his feet digging in for some kind of traction, his face just a few inches from the pavement as he leans forward while the harness he’s wearing strains on his shoulders.

It takes a few moments, but the strength and power of the Winnipeg Blue Bombers receiver results in movement as the semi-truck he is attempting to pull begins to slowly roll forward.

Your mind must arrive at your destination before your life does! ⚡️ #CreateU #Luck2Fast #Grind #Nfl #CFL #SemiTruck #RCSTruck

“Let me tell you,” began Whitehead in a chat with bluebombers.com on the weekend, “after that, wow, my legs really felt like noodles.”

Here’s the back story: while training at his home in Miami, Fla., Whitehead usually ends his workout sessions by doing sled pulls. He got into the act of pulling his own truck as part of his exercising, posted an Instagram story of it and then saw a reply from a fan pulling a bigger box truck.

“I jokingly said, ‘OK, if we’re trying to compete right now, what do I have to do? Pull an 18-wheeler?’,” Whitehead explained. “Then they Tweeted back, ‘If you pull an 18-wheeler, I’m going to pull a train.’”

Whitehead contacted his trainer Raymond Washington immediately, asking how difficult it would be to pull a semi-truck. The answer? “He said ‘It’s going to be hard, but it’s not impossible. Let’s try it.’”

Whitehead did try it and the video evidence subsequently exploded on social media, especially after House of Highlights – with thousands of Twitter and Instagram followers and over 2.4 million subscribers on their YouTube channel – contacted him and asked for permission to run the clip.

“It’s been going a whole lot of crazy since then,” said Whitehead with a chuckle. “I’ve been getting a lot of messages.”

This is a story about more than just Whitehead pulling a semi-truck, although that’s a pretty cool place to start. 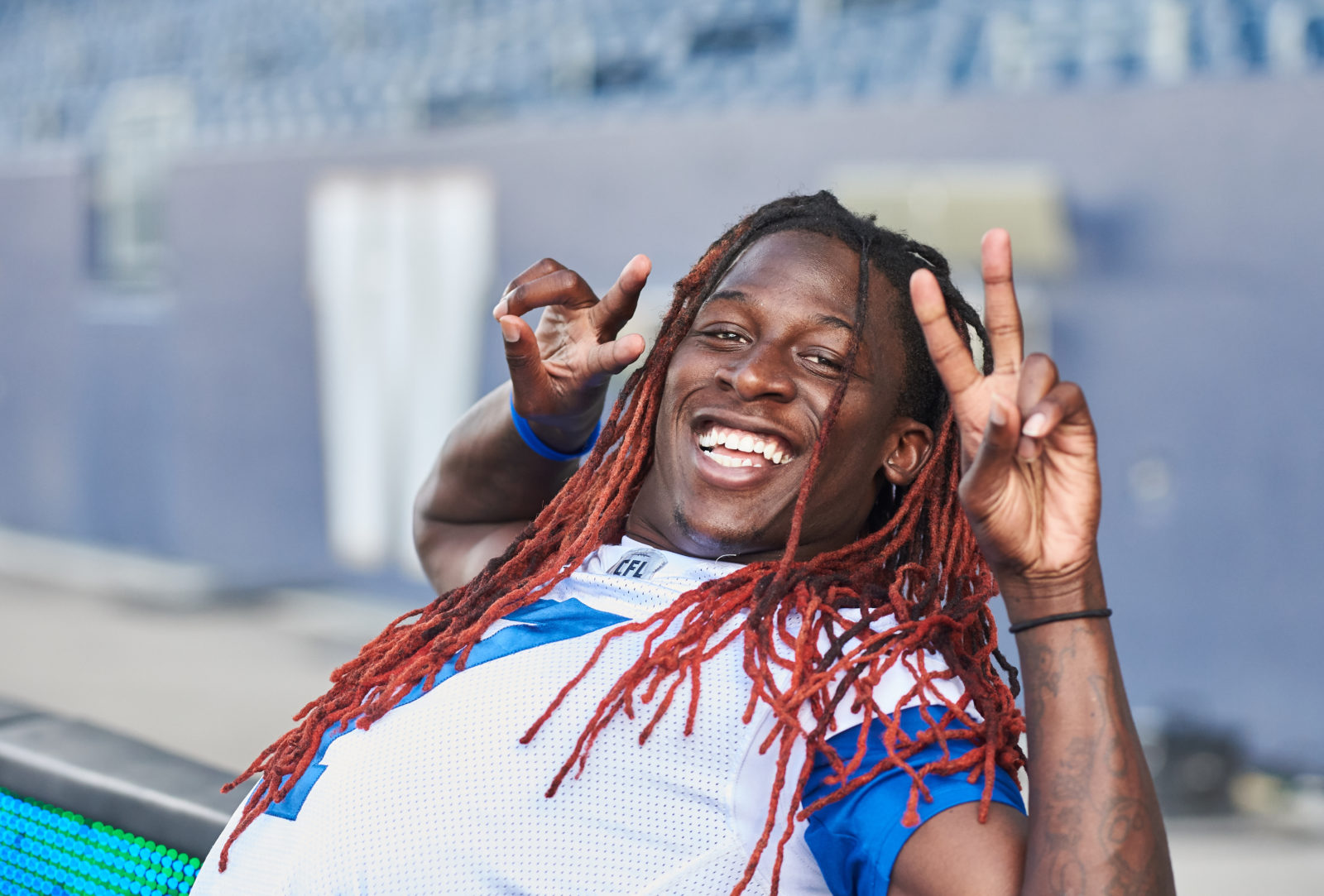 It’s also a story about growth, mentally and physically, and a man eager to get back to honing his craft for what has become a second chance in the Canadian Football League.

An example: Whitehead added an expression to the video he posted on Instagram that fits where his head is at right now as he awaits the green light for a return to football:

‘Your mind must arrive at your destination before your life does.’

“I have this app, ‘Sprinkle of Jesus’ that sends me quotes every day,” said Whitehead. “It helps keep me level-headed and my mind clear. Every day I get a message, and it feels like it’s something I’m going through or something I’ve already been through. As soon as I had finished, maybe four hours later, that was my alert.

Whitehead arrived in Winnipeg this time last year as a wide-eyed rookie, gleefully rubbing his hands together at all the extra room the Canadian field offered to a returner with blazing speed and how the ‘Waggle’ gave receivers a running start before the ball was snapped.

He made 15 starts in 2019, and made a flashy introduction to Bombers fans – and the rest of the CFL – in the club’s home opener with seven receptions for 155 yards and two touchdowns in a win over the Edmonton Eskimos. He finished with 52 catches for 521 yards and those two TDs – the reception total second on the club to Andrew Harris’ 70 – but also did not dress for the playoff games. 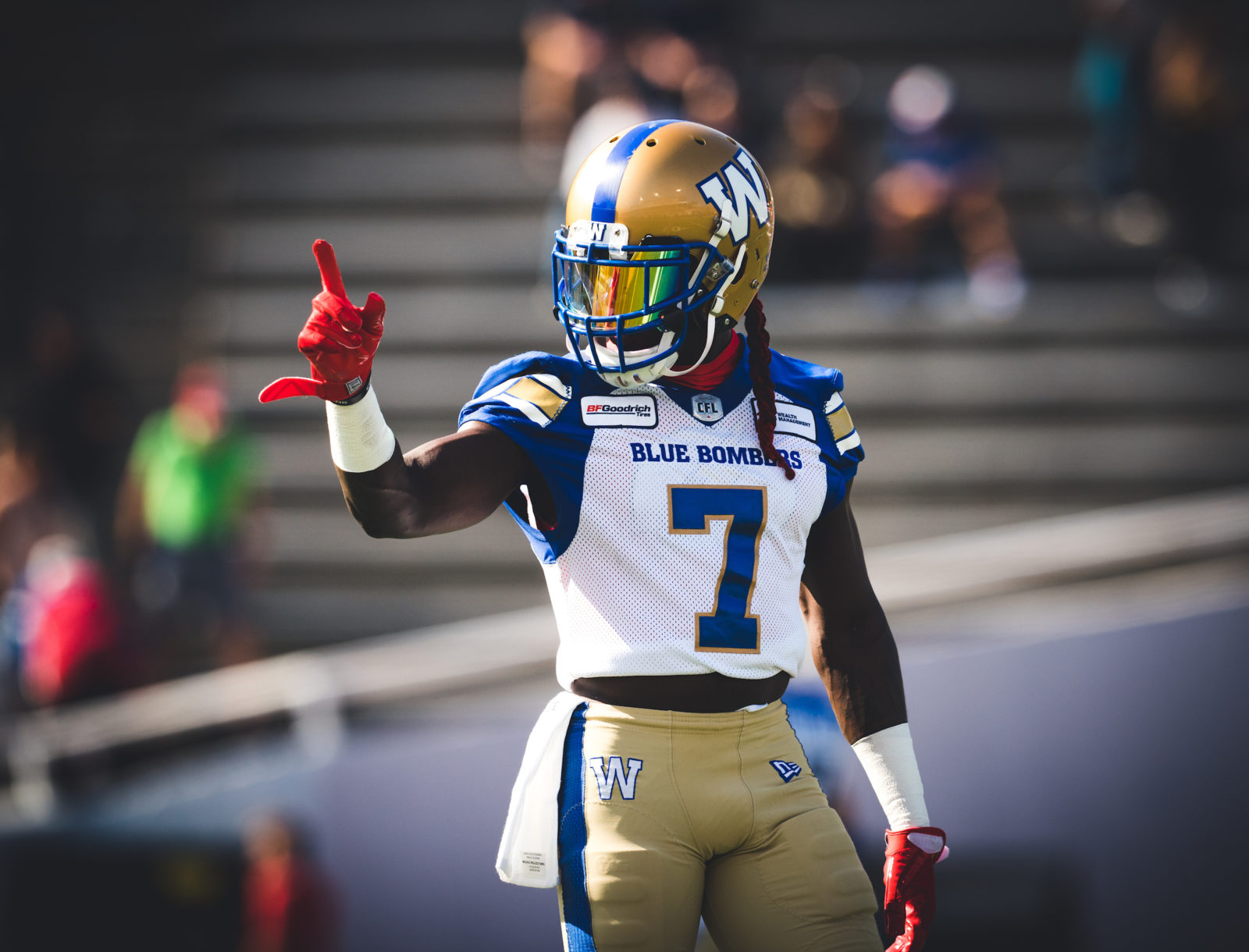 All of that is part of what has inspired him this offseason to get bigger and stronger while maintaining his speed. He’s up early most days to begin training at 4:30 a.m. and the results are showing.

“I’ve added a lot of muscle,” he said. “I’ve gotten a lot stronger; strongest I’ve ever been. My body is very clean. It’s been a great offseason. I’ve been training hard for the last three months.”

Whitehead has augmented his training regime by changing his diet, too, concentrating on adding more vegetables, grains and lean meats while cutting out alcohol and fast food.

“I feel so much better. I have so much more energy,” Whitehead explained. “My muscles don’t ache. I’m not drowsy… I’ve just got that confident energy that you need. It’s been amazing.

“I wanted to come back with more explosion and still have my quick-twitch and speed. But I also want to be able to break those shoestring tackles and make the extra explosive play when it’s needed.”

The other component to his offseason training has involved film work. Whitehead wants to be a consistent threat on offence when the team returns, and has been intrigued by what he’s been told about how he might be used in Buck Pierce’s offence.

“I’ve been honing in on a lot more of the details because that’s where I got myself in trouble a lot last year – I tried to do everything based on speed,” said Whitehead. “This year I want to come back smarter, knowing what’s going on with the defence, because that will help me and I won’t have to use speed as much, I can use technique.” 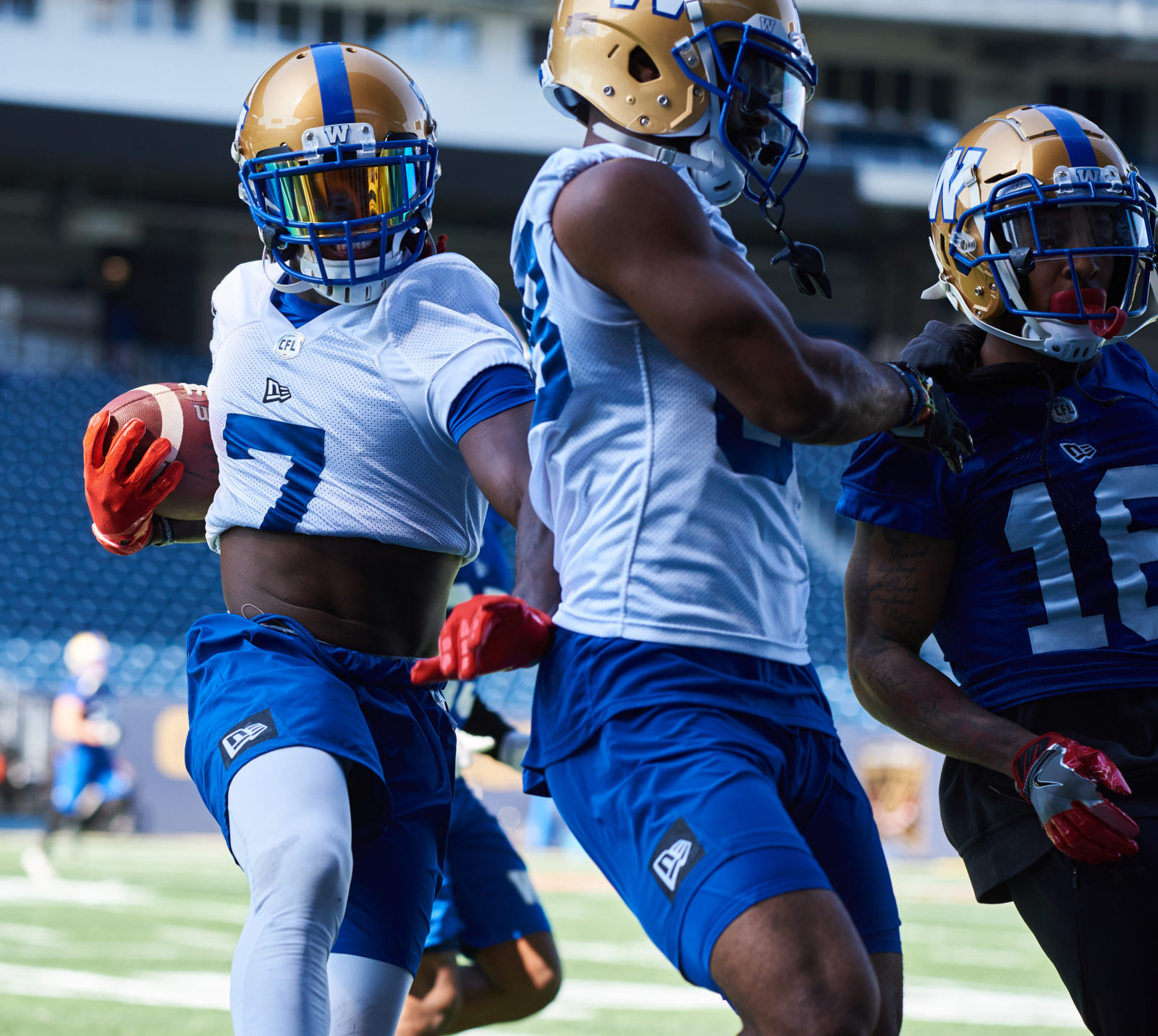 “I want to be a master as far as knowing opponents. I want it so that I don’t have to be blazing 100 miles per hour the whole game, but understand, ‘OK, this is where the defender is going to be, so this is where I need to be because it’s going to be open.’

That’s the kind of statement every coaching staff wants to hear from an athlete, but particularly for a CFLer entering his second year. Couple Whitehead’s blazing speed and natural abilities with a newfound commitment to training and learning the game and, well, the possibilities are enticing.

“That’s why what we’re going through right now really sucks,” said Whitehead. “I was so ready to leave and be in camp right now. It was not only just to get back to football, but to be around my teammates again and get that chemistry back that we had.

“I’ve grown a lot this offseason. I had a lot of time to myself. I wanted to come back a better me, a better teammate. Whatever they got planned for me, I’m going to be ready for it. I do know I’m in shape and mentally I’m ready. I want to be able to help teach the new guys like they taught me when I first came in.

“Just let me know when this is over and I can get back up there. I’ll be there as fast as I can.”