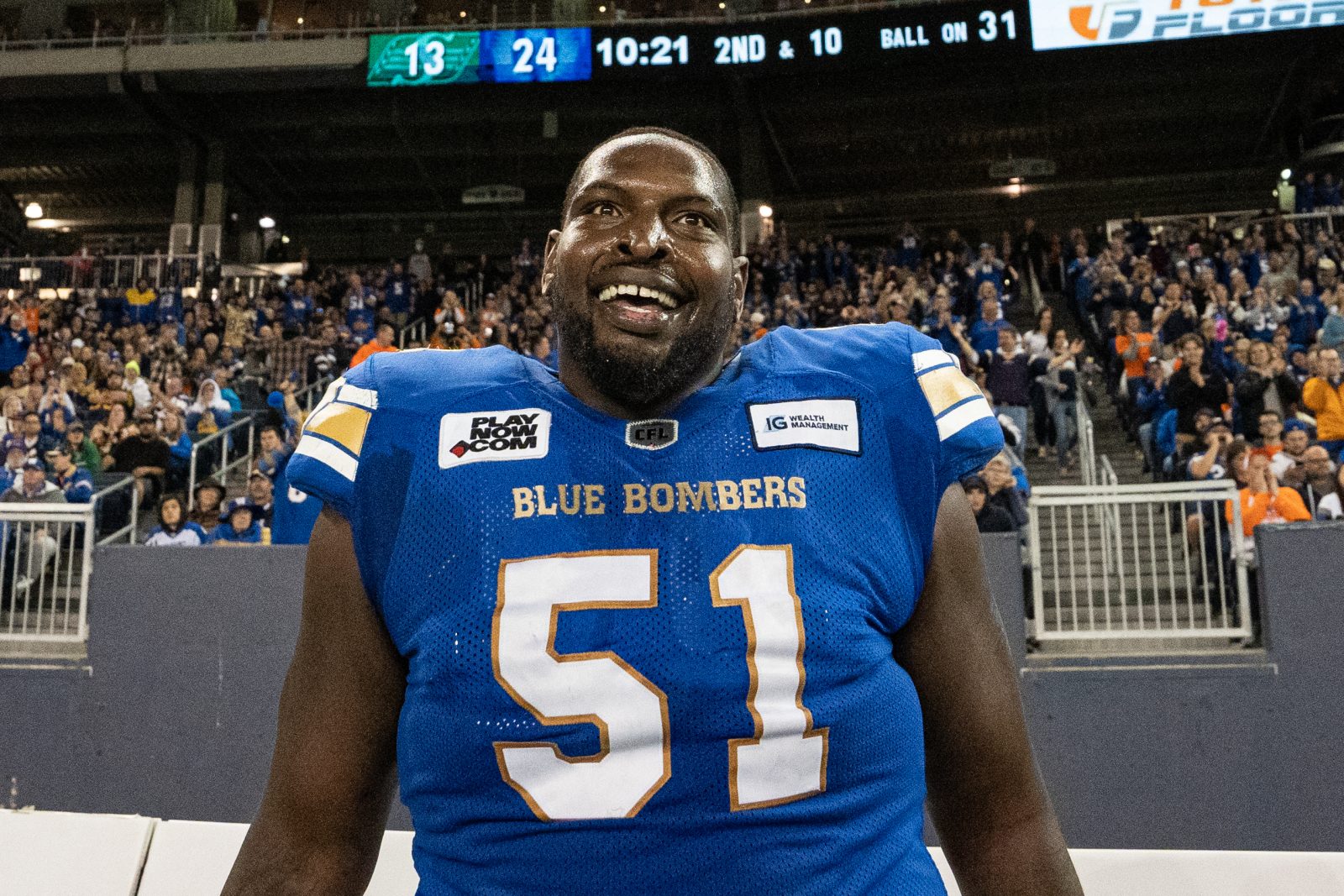 Just like the rest of his Winnipeg Blue Bombers teammates, Jermarcus Hardrick has found a certain comfort and strength in the ‘let’s just go 1-0 this week’ mantra.

Sure, it’s become almost cliché in these parts over the last few years, but there’s a simplicity to it that can help keep the individual and collective focus fixed on the right here and now while blocking out all the outside noise and distractions. Returning to that approach will come soon enough for Hardrick, the 32-year-old tackle who officially put his name on a one-year contract extension to return in 2023 this week.

Yet, it’s during the Canadian Football League offseason where Hardrick often pulls back for a wide-angle look at his own road travelled. And it’s where he’s come from and what he’s been through that will forever fuel him – even long after the days of pancaking a defensive end or lifting a teammate up on his shoulders after another Blue Bombers touchdown are finished.

We’ve told his compelling story before in this space, as far back as 2017 when he first opened up about his humble upbringing in Mississippi and how he eventually found his way to Winnipeg. And we returned to it today as he celebrated what will be another year upcoming in Blue and Gold.

This is the Jermarcus Hardrick Story revisited – about taking a job selling cars when he had $1.48 in his bank account, about surviving on mayo and maple syrup sandwiches and, ultimately, about the peace he has found professionally and personally in Manitoba… 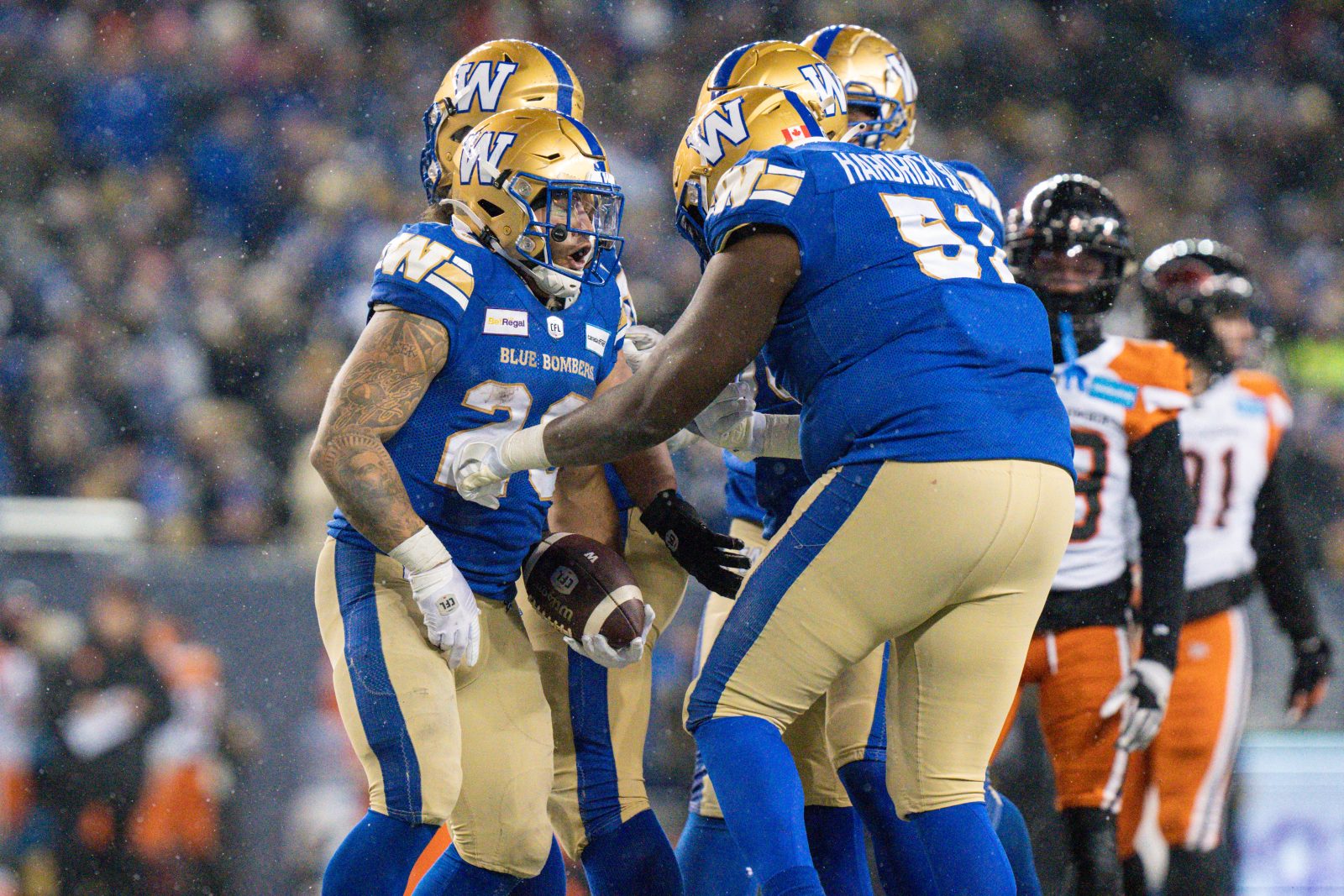 “I’m living on Cloud 9 right now. I’m so glad to be back in Winnipeg with the guys and with the family,” began Hardrick in a chat with bluebombers.com. “Winnipeg has become another home for me. In my first five years of pro I was on six or seven different teams – I was on two NFL teams, I tried out for three more NFL teams, I was on two Arena teams and two CFL teams before I got to Winnipeg.

“I had been in a lot of locker rooms, and I’ve got a lot of different workout gear from those teams. That’s why it’s been so nice to wear nothing but Blue Bombers things for my offseason workouts for the last seven years.”

Hardrick’s return brings a stability to the offensive trenches for this season, as he joins Geoff Gray, Chris Kolankowski, Liam Dobson and Drew Richmond, along with Stanley Bryant and Pat Neufeld – both of whom had also been pending free agents – leaving only Michael Couture unsigned.

It’s also an important and significant moment for Hardrick himself, after growing up watching his single-parent mom working hours upon hours just to make ends meet. It’s those days which still serve as his inspiration. 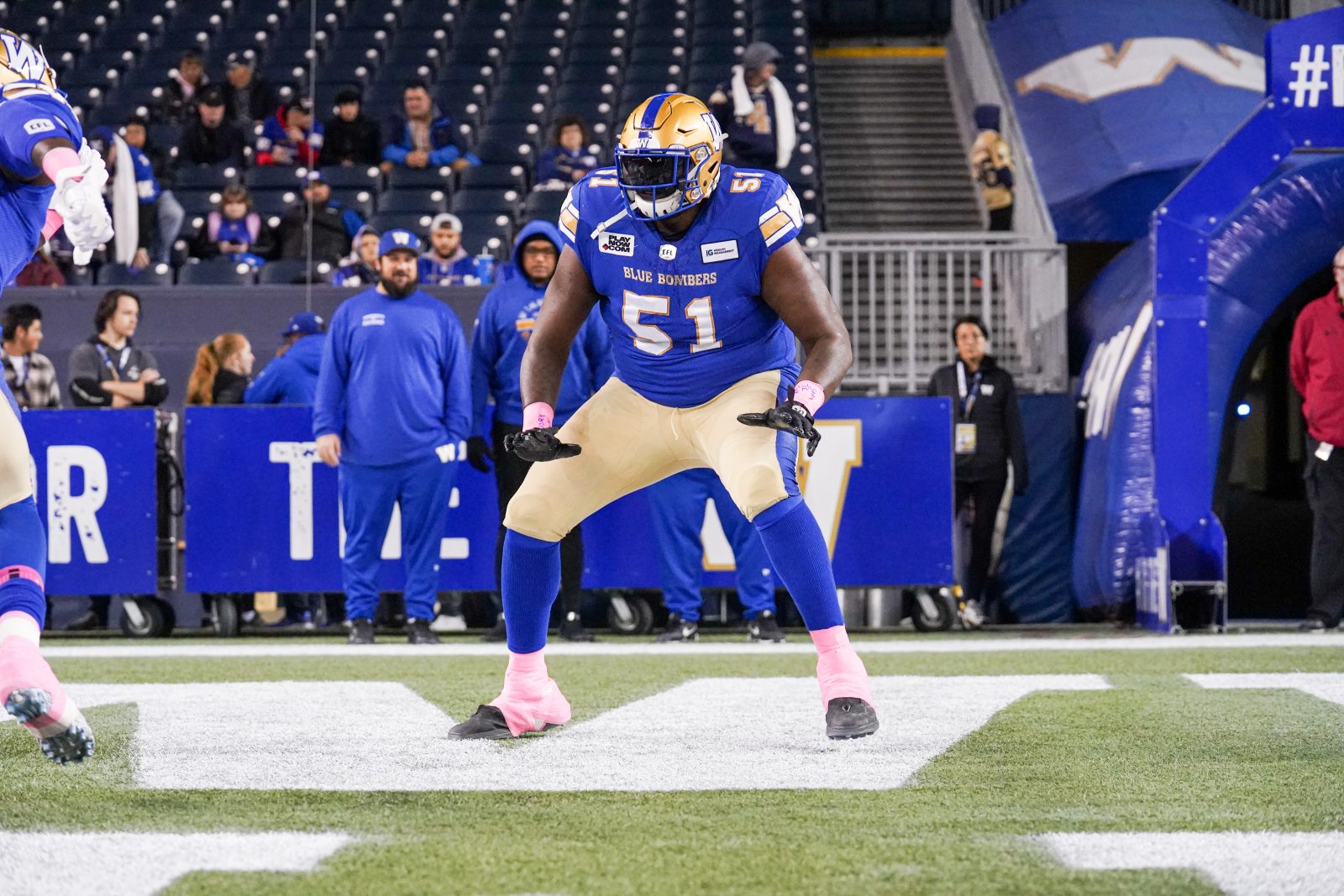 “When I was a kid, I used to picture being able to take my own kids one day to the grocery store to get them whatever they wanted and that if they said they were hungry we could get them some fast food right there and then. My wife gets on me now that I’m such a softie to our kids, but I want to spoil them and give them everything I didn’t have. I also want to teach them and make them work hard.

“I have my own business out here (in Lincoln, Neb. his offseason home) and I’m trying to help them understand the value of a dollar, because I know it.”

Hardrick runs ‘Yoshi O-line Skills and Drills’ camps in Nebraska during the offseason, capitalizing on his notoriety as a star with the Cornhuskers during his college playing days – plus, his success with the Blue Bombers – to draw kids of all ages to his training.

“And when we get there, I sit in the truck and my kids (Jermarcus, Jr., 9; Santana, seven; and Lyla, six) get all the bags out, they let the doors up, they put the (footwork) ladders out, they get the chairs set up and clear the eraser boards for me.

“I tell them this is their job and try to show them how to work. And as soon as we get to the gas station afterward, they know they can eat or get whatever they want.

“I’m trying, man,” he added, with a chuckle. “You know what? I wish there was a playbook or rulebook to parenting, because once you think you’ve got it, you get a curveball. My wife and I are just trying to help them become great people.” 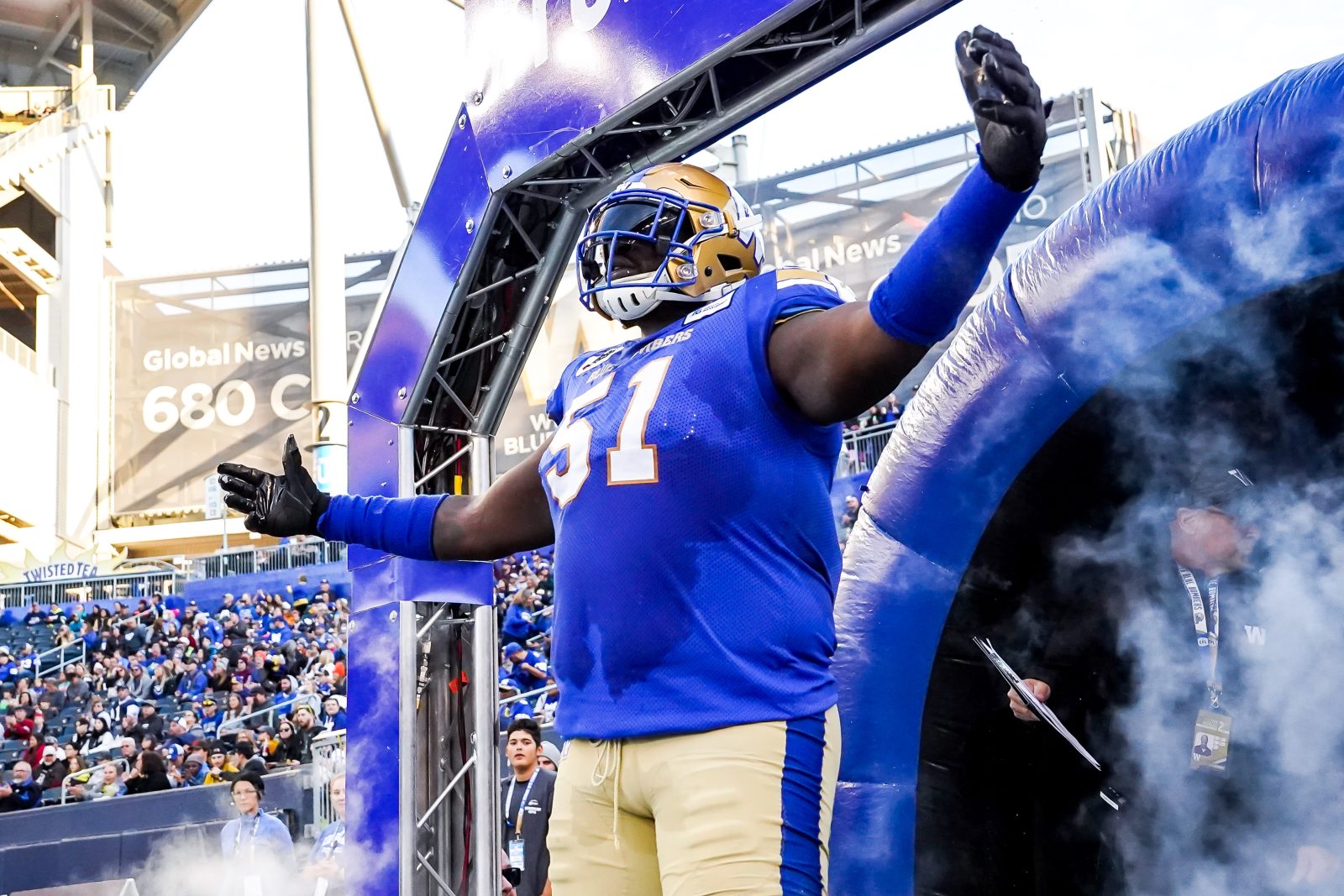 There’s an obvious pride in Hardrick voice here. He and Samantha are comfortable and happy and so are their kids. And, again, that means everything for a man who wandered for years before finding a home with the Blue Bombers back in 2016.

Even then, Hardrick worried about his future.

“I was on my last straw when I got to Winnipeg. I was already thinking about quitting football,” he said. “I was actually already selling cars. Winnipeg was going to be my third CFL team in three years and so when my agent called me, he told me, ‘This is your last shot. You’ve been on three CFL teams in three years. You haven’t stuck in the NFL. You haven’t stuck in Arena football. This is it. These guys like you, but they’ve put a weight clause in your contract. They like you but think you’re a little too heavy.’

“I was all over the place then. I was scraping up pennies just to be able to get bread and milk. Times were rough. I had a dollar and 48 cents in my account and so I quit football to go sell cars.”

Hardrick can laugh now about those days at Markell BMW – “I don’t think it’s even there anymore. I think it’s a Top Golf” – but like so many other chapters in his life, it did help shape him.

“I was selling luxury cars — BMWs, Jaguars, Range Rovers,” he recalled. “I didn’t know anything about cars, but I was in Nebraska and there’s one Division I football school in the state. I had a bit of a name then and so when people came in, I just sold them on me. My first month I think I sold one or two cars. The next month I sold five and then I had a seven (sale) month and an eight month. But when I started, I didn’t know anything. I would see somebody outside in the lot and I would literally hop out of my chair and run to the parking lot. They would tell me, ‘You’re too big to be running around the parking lot like that.’” 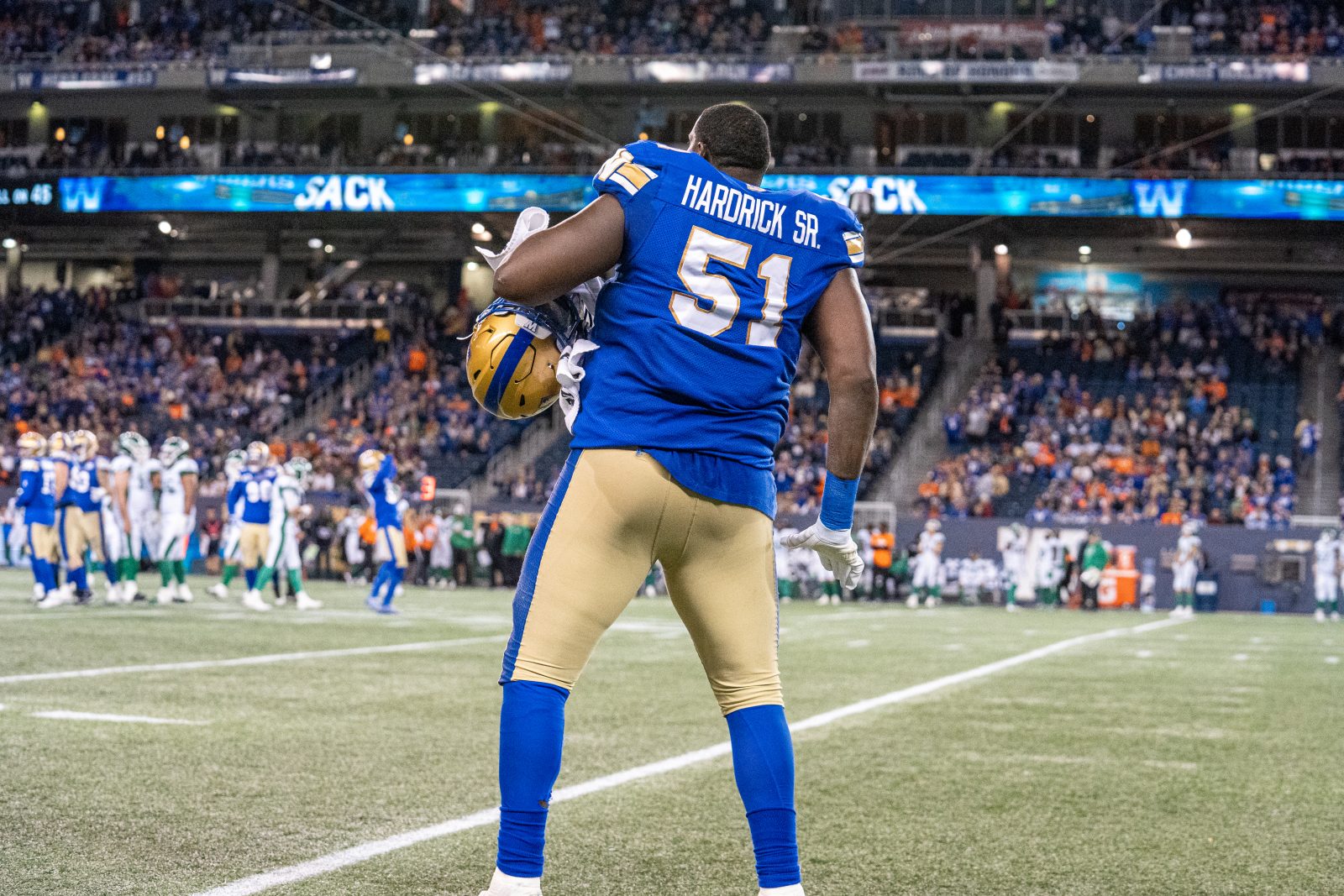 “We had just had a newborn – we only had two kids at the time – and I didn’t know how the car business worked. I’d leave Lincoln at 6 a.m. and Omaha is an hour’s drive. I’d get there at 7, work till 7 and then have another hour to drive home. That was six days a week, I had a newborn and wasn’t spending any time with my family. It was rough.

“Then I got that last call from Winnipeg and my wife said, ‘Let’s do it.’”

Hardrick found a home on the right side of Winnipeg’s O-line in ’16 and has morphed into one of the best tackles in the league. Gone are the days of living out of suitcase while moving from one opportunity to the next. It may be part of the transient lifestyle of pro football many a single man can fight through, but the dynamics change with a wife and kids.

“It’s hard telling your family you don’t know when you could be cut or traded, or this could be your last day in football,” Hardrick said. “That’s why we just try to make the most of every day. When I first started, I’d walk into the locker room, and I’d text my wife to tell her it (his jersey) is still up in my locker. She’d tell me to relax and that I was thinking too much.

“But there’s a peace that comes with just getting to work there in Winnipeg and not looking over your back. I mean, you’re always looking over your back at other great football players and the business of the game, but to be able to put down roots and have my kids be comfortable there… those are legit roots and I feel that every day.

“I am happy. That’s a big thing,” he added. “I sit back all the time and think about where I came from and those rough days. Back then it was mayo sandwiches and syrup sandwiches. It’s a long way from that. Every once in a while, I’ll have a mayo or syrup sandwich and my wife will ask me what I’m doing. It’s just to remind me where I’ve come from and my journey.”