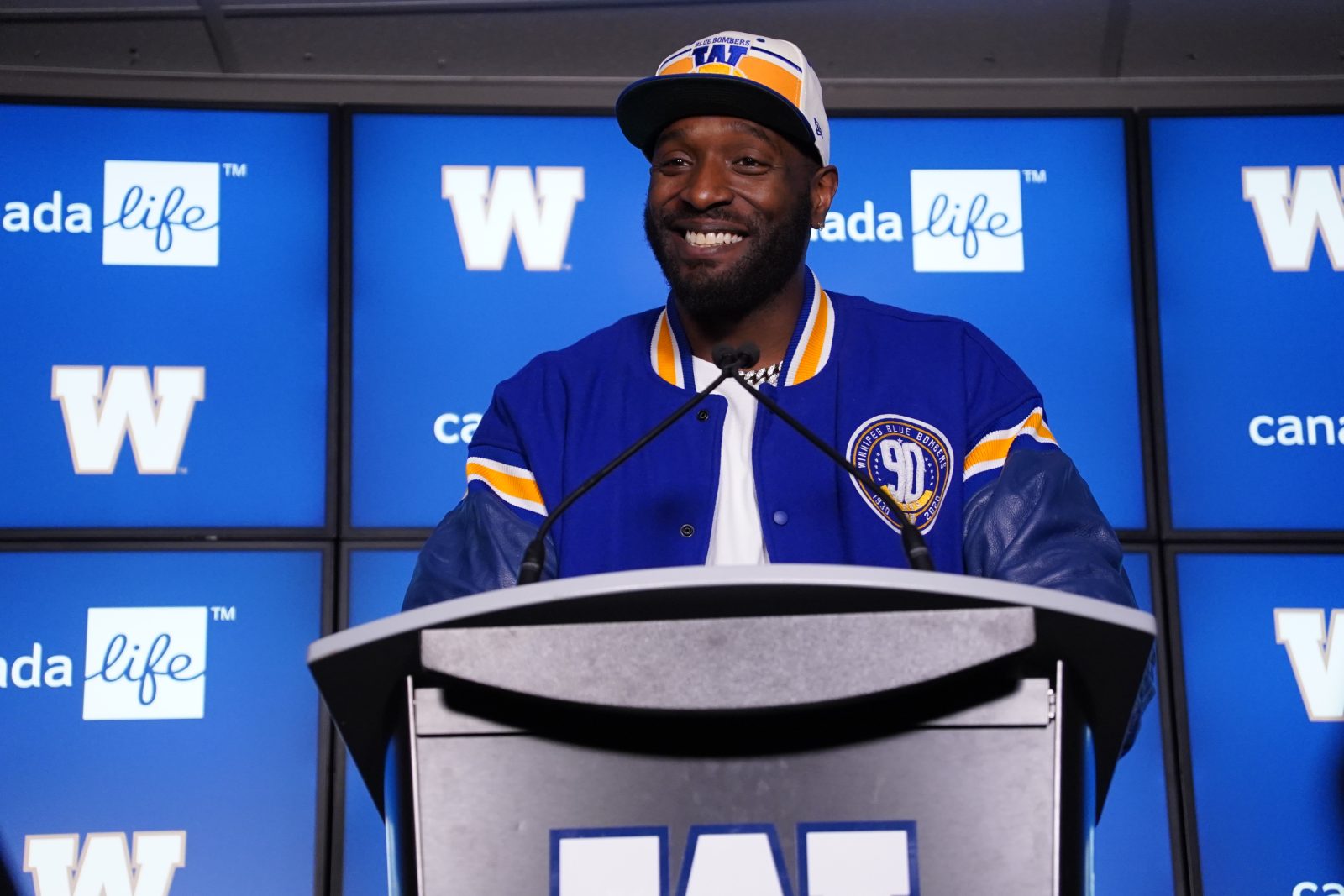 Willie Jefferson speaks with the media on November 28, 2022.

Willie Jefferson stands 6-7, tips the scales at 242 pounds and has transformed into an absolute menace to quarterbacks all across the Canadian Football League.

Let it be stated he has also morphed into a size-large walking, talking, forever-grinning billboard for everything that is right about the Winnipeg Blue Bombers.

The 31-year-old defensive end put his name on a new one-year contract with the club on the weekend and when he met with the media Monday morning at IG Field, he was decked out in a Blue Bombers hat, sweats and jacket.

“It’s just the culture, the friendships I’ve built with teammates, the coaches, the organization, the community. It feels like home,” began Jefferson when asked about not only staying with the Blue Bombers rather than test free agency, but opting to live in Winnipeg year-round.

“It feels good to be here and I just didn’t want to be anywhere else but Winnipeg right now.

“When I first got here in ’19 it was just different and that year, there were a lot of firsts for me. I was doing a lot of things on my own professionally and once I got here and the culture was already set and we began to build more while I was here it started to come together for me, for my family, this team and this organization. It just felt right.” 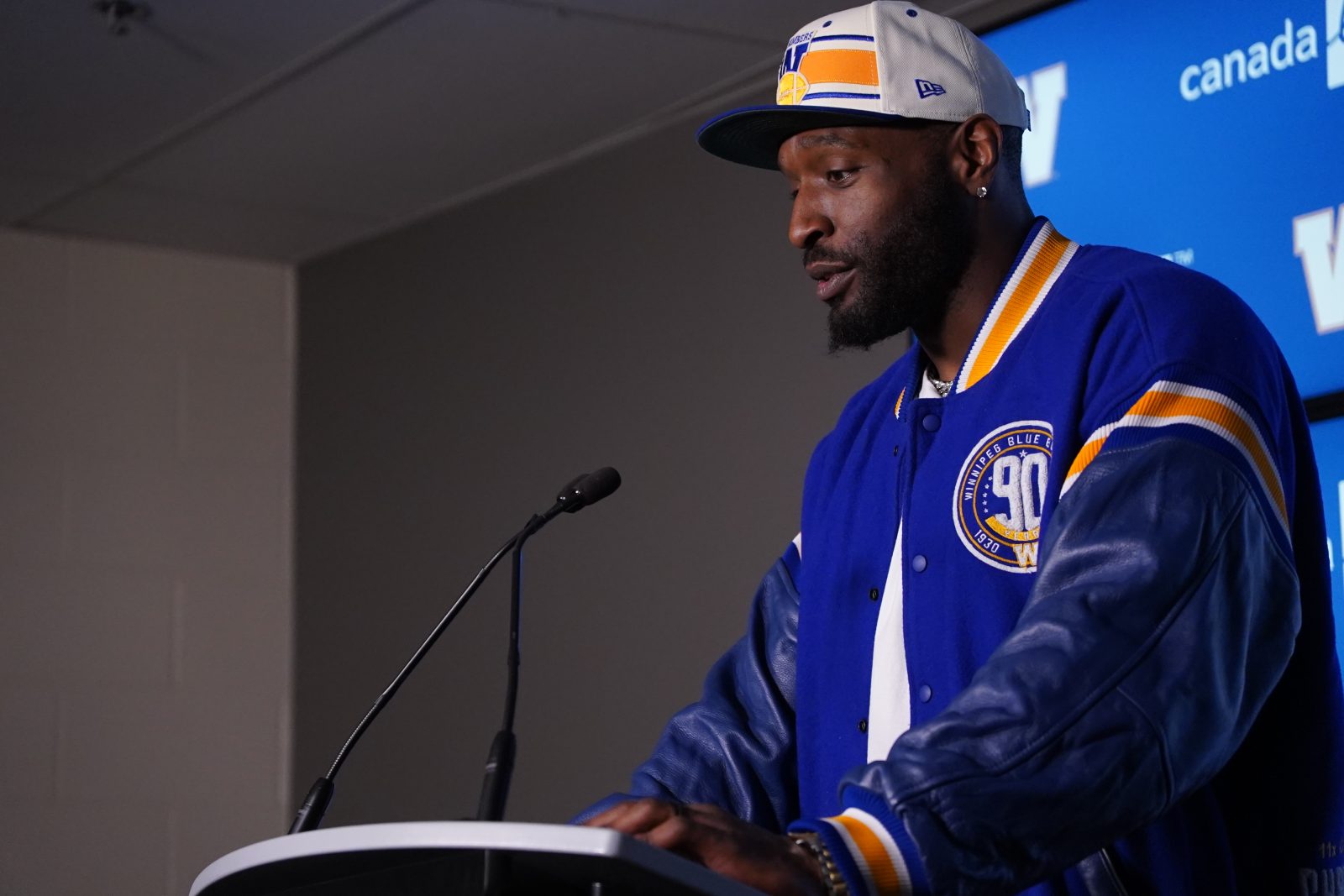 Jefferson’s return guarantees the club will continue to have a dominant force at end and shrinks the list of prospective free agents to 24. Despite often being double-teamed, Jefferson was named the club’s Most Outstanding Defensive Player in 2022 after leading the team with seven quarterback sacks, adding 33 tackles, a Pick-6, two forced fumbles and 10 pass knockdowns. He also became the first player in CFL history to record 50 career sacks and pass knockdowns.

Jefferson’s 26 sacks as a Blue Bomber have him within range of the club’s all-time Top 10 in that department – Tyrone Jones is first at 98, while Gavin Walls and Elfrid Payton are tied for fifth with 47 – and he indicated Monday he hoped he could play for several more years. That kind of continued production could put him into the Ring of Honour discussion.

“I look into those rafters and see names like Doug Brown, Milt Stegall, (Chris) Walby, and you want to be those guys. There are things I want to do, records I want to break for this organization. You’ve got to stay around to do that so that’s what I plan on doing.”

Jefferson and his wife Holly, along with first-born Kelley, welcomed another daughter/sister into this world in the fall, with Reilley Rose being born right here in Winnipeg.

“Just to know I’ve been here for so long and put in so much work, for me to bring my wife and daughter here and for them to love it and now for me to have a Canadian daughter is amazing,” he said. “I can’t wait to just show her the world through my eyes and do everything I can to help raise her to be a beautiful Canadian citizen.”

Jefferson has often spoken of how his family – ‘his girls’, as he calls them – have helped mature him since the first days he came north to the CFL with Edmonton in 2014. All these years later the CFL isn’t just a pit-stop en route to earning a crack at another NFL look, but now his home.

“In 2014, when I came up, I was really just trying to focus on being on the team and sticking on the team for a full season, and then just trying to get better, trying to learn the game,” Jefferson said. “Being around the guys like Odell (Willis), he (told) me how it is to be a CFL player, how I could grow my name, establish myself and make a career for myself in the CFL.

“And then, fast forward to now – three Grey Cups, defensive player of the year (2019) and all these accolades, now I’ve had a daughter in Canada, and I’ve made Canada my home professionally. From then till now, I’ve learned so much, I’ve grown so much and I’m able to share my story with some young guys that are pretty much in the same position that I’m in and shine some light on them and basically jumpstart their ideas, their minds, to try to come up here and start a career, start a family; to be able to be financially stable to go back to the States, if you want to, in the off-season, and do some things to take care of your family and be smart with your money. And then come up here and make a name for yourself, make a legacy for yourself and one day they can have their names in the rafters just like I hope to one day.”