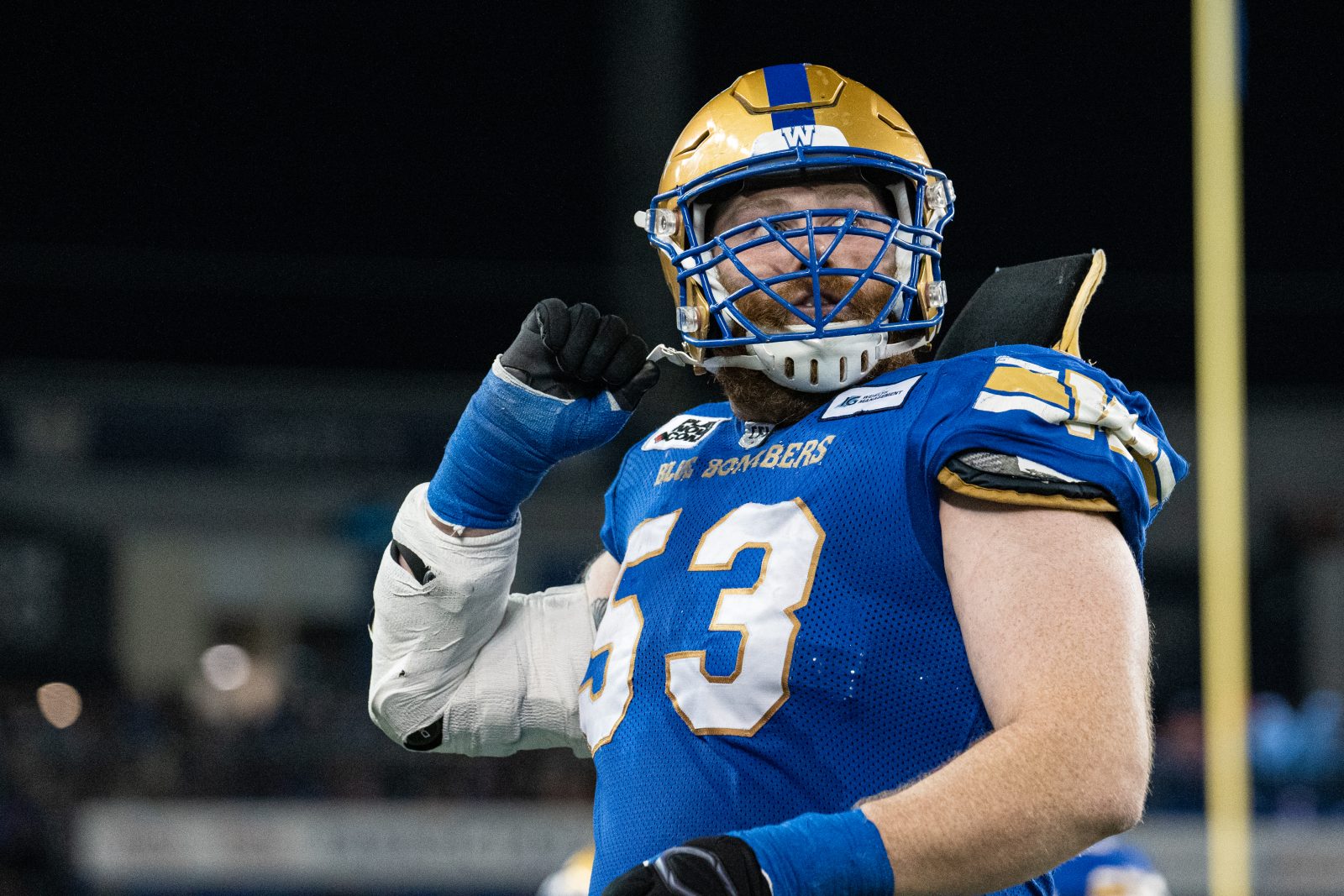 Pat Neufeld stood at the podium the very picture of a confident man, a two-time Canadian Football League All-Star, a veteran and an important piece for the Winnipeg Blue Bombers in the trenches and in the locker room.

And just to add an extra touch to this portrait, the gritty right guard – fresh from inking a contract extension – was rocking a ‘Shorty’s Pizza’ T-shirt as a rather transparent attempt for some sort of deal the next time he and his offensive line compadres are gathering to gorge.

“I love that pizza place,” said Neufeld with a grin. “They’re over there on Maryland, if anyone was wondering. But they’re a great pizza spot. That’s our post-game pizza place, so shout out to Shorty’s.”

The snapshot of Neufeld during his media availability on Friday is light years removed from the man who arrived in October 2013 in a trade with the Saskatchewan Roughriders for defensive end Alex Hall.

Born and raised in Regina and a product of the University of Saskatchewan Huskies powerhouse program, Neufeld’s heart was ripped from his chest when he was dealt as he was leaving a Riders team weeks away from winning the Grey Cup for a Blue Bombers squad that was, well, still years away from a championship.

“I’ll admit, growing up in Saskatchewan I was a huge Riders fan and playing for my hometown team was that dream come true,” said Neufeld. “I had told them I never wanted to leave, and I was assured I was going to be a piece of their puzzle for a long time.

“Then the business of football happens, and I was unfortunately hurt and coming off an injury and didn’t play as well coming off that injury and then re-injured it. Then when I got healthy enough, I was traded here. I was just so committed to that team emotionally and mentally with my family being there and having Rider paraphernalia and Rider jerseys and Rider everything… it was tough emotionally to leave that place and a place where you see yourself being the next Gene Makowsky. I even had a Gene Makowsky jersey.

That time for reflection, it turns out, was massive for Neufeld. He couldn’t watch the 2013 Grey Cup – he and his partner drove to his uncle’s cabin outside of Calgary to get away from it all – and he even contemplated stepping away from the game. But upon the advice of his agent at the time and his family, he opted to stick with the game and give the new regime that was taking over in Winnipeg a chance.

“Looking back, it’s kind of selfish thing to rely on emotion that much and not reason through it, but I’m glad those people convinced me to stick it out and trusting myself, too, to go through the hard times,” he said. “And then just being around Osh and being around (Bob) Wylie (then the offensive line coach) and around the group of guys we had drafted that year was big. I made a lot of connections early and we started with some success in that 2014 year and that sparked everything, and it continued to build from there.”

Everyone knows how this movie has unfolded – O’Shea was hired in 2014 and along with President & CEO Wade Miller and GM Kyle Walters the Blue Bombers morphed into a two-time champion and CFL powerhouse.

Neufeld was there for the first hammer swings of the build and that – being there at the beginning and seeing it evolve – is a massive component to his return rather than test free agency in the winter.

“Jake (Thomas) and I talk all the time about how tough it was and how many guys were in that locker room and how transient it was,” said Neufeld of the 2013 Blue Bombers. “Now we have consistency in people and personnel and that shows on the field – when guys really care about each other they want to play harder for each other and sacrifice more. Seeing that grow and build over time, coupled with winning, goes a long way to wanting to say in a place like this. The transition has been pretty big and pretty cool to be a part of.

“… A lot of people want to be here, especially when they spend time here. It’s a pretty infectious place to play and I mean that in all the best ways possible. Hopefully, we can get a good group of guys here. Like I said, I understand the business of this sport, but like Osh said, ‘Sometimes the grass isn’t always greener’ and I said that to guys before, too. Sometimes it’s best to stay here.”