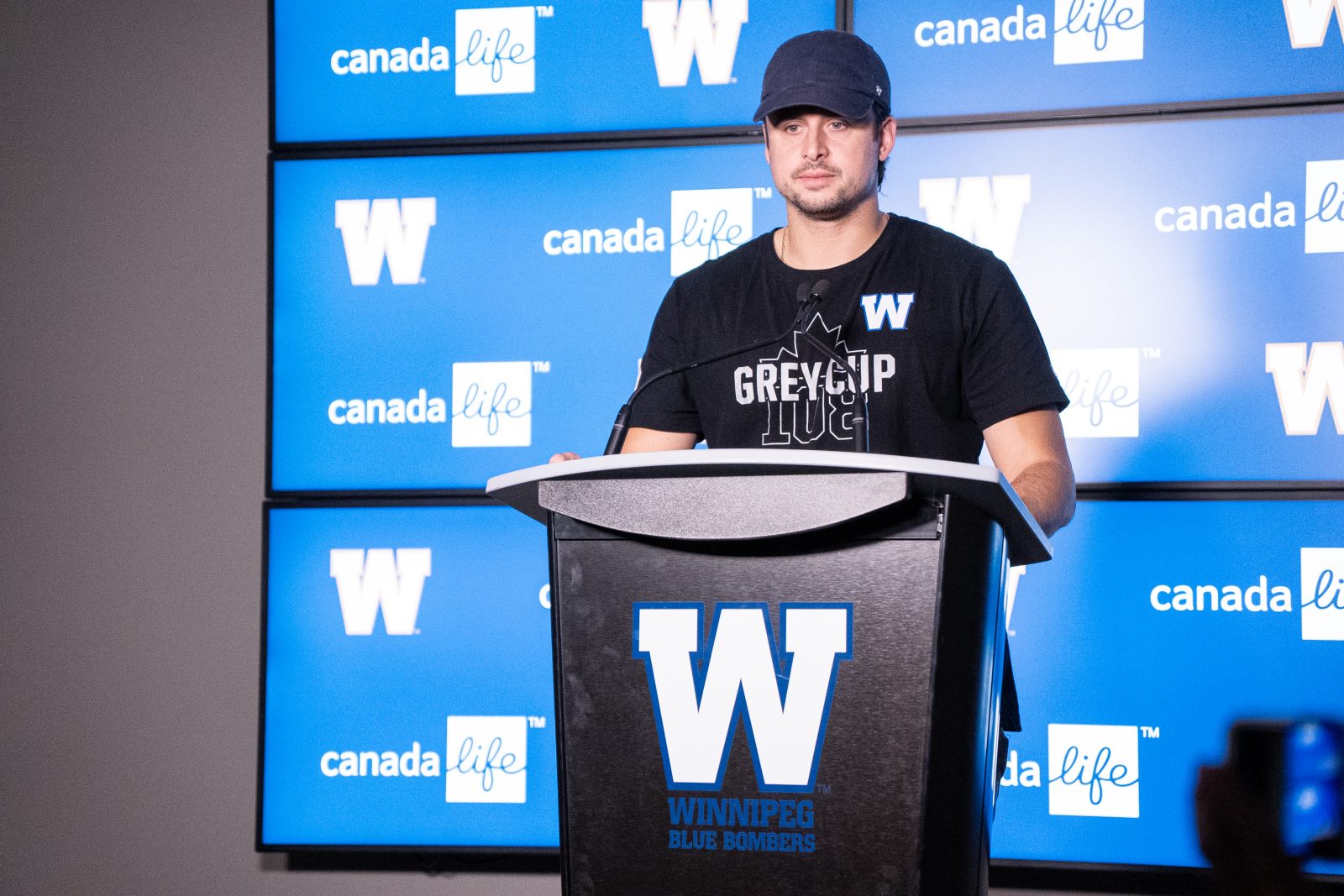 The sudden stab in the heart – followed by the cold, hard slap to the face – came late Sunday night in Regina in the loss in the 109th Grey Cup. And two days later the pain still lingers for the Winnipeg Blue Bombers.

Players gathered Tuesday morning for a team meeting and then individual exit sessions with the coaching staff before the offseason exodus to parts all over the map.

Some are already locked in to return in 2023 for a shot at redemption after the 24-23 loss to the Toronto Argonauts. Others will undoubtedly be in other uniforms – perhaps in other leagues – when they return to the gridiron.

But in the here and now, the hurt remains.

“If anything, it’s finally settling in being here… all that adrenaline gone. It’s just so sad, man. This is it,” said receiver Drew Wolitarsky. “This is the last time I’m going to get to see some of these guys and you don’t know really what to say. There’s just so much work and emotion behind it in what we’ve been through for six months… I feel like we’ve still got practice tomorrow in my mind. I don’t think it’s going to hit me until things start slowing down, until stuff’s not on TV anymore.

“We should be in here drinking beers. It’s painful because that’s what we’ve been used to the last couple years of feeling that way. This is definitely a new feeling I’ve never felt – I’ve never lost a Grey Cup – so, it’s something I’ve got to learn from and use it to propel going forward.”

Several players said Tuesday they had yet to rewatch the 109th Grey Cup. That will come soon for some, while others need more time as the wound is still so fresh. 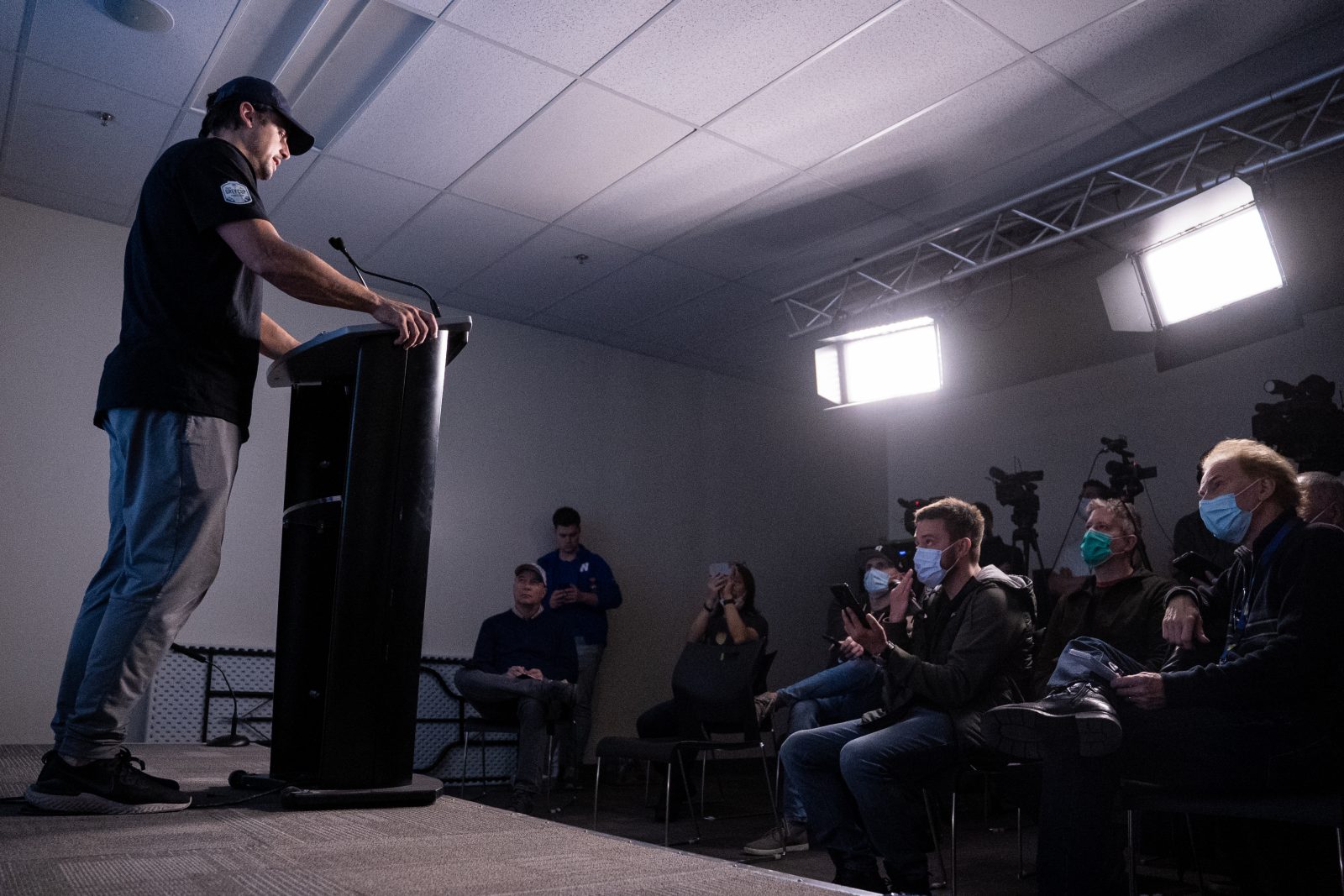 “I haven’t watched it yet,” said quarterback Zach Collaros. “I have replayed a lot of it in my head the last however many hours it’s been. We spoke a little bit about it… Osh (head coach Mike O’Shea) reiterated it is part of the process of getting better. Obviously there will be time spent watching it over and over again, I’m sure.

“It’s not going to be fun, but you get to learn from these things. What can we get better at? What were we not prepared for? What were we getting away with that was finally exploited? All those kind of things you can look at that and hopefully come with some answers and get started on next season.”

The Blue Bombers had a 23-14 lead on Janarion Grant’s spectacular 102-yard punt return on the first play of the fourth quarter, but then made a series of blunders that saw a potential third-consecutive championship slip away.

“It still hurts. There are different parts of the day where you start thinking about it again and you get into your feels about it,” said fullback Mike Miller. “I still haven’t watched the film yet. That will be the closure of it, just to get the actual understanding of what transpired in the game. Maybe I’ll do that in the next couple of days.

“It’s not something we expected. We knew Toronto is a good team and it was going to be a battle, but with the season we had and the locker room of guys we had nobody thought this would be the position we’re in right now.”

Here are some other sound bites, news and notes from the Blue Bombers final media availability as a team on Tuesday: 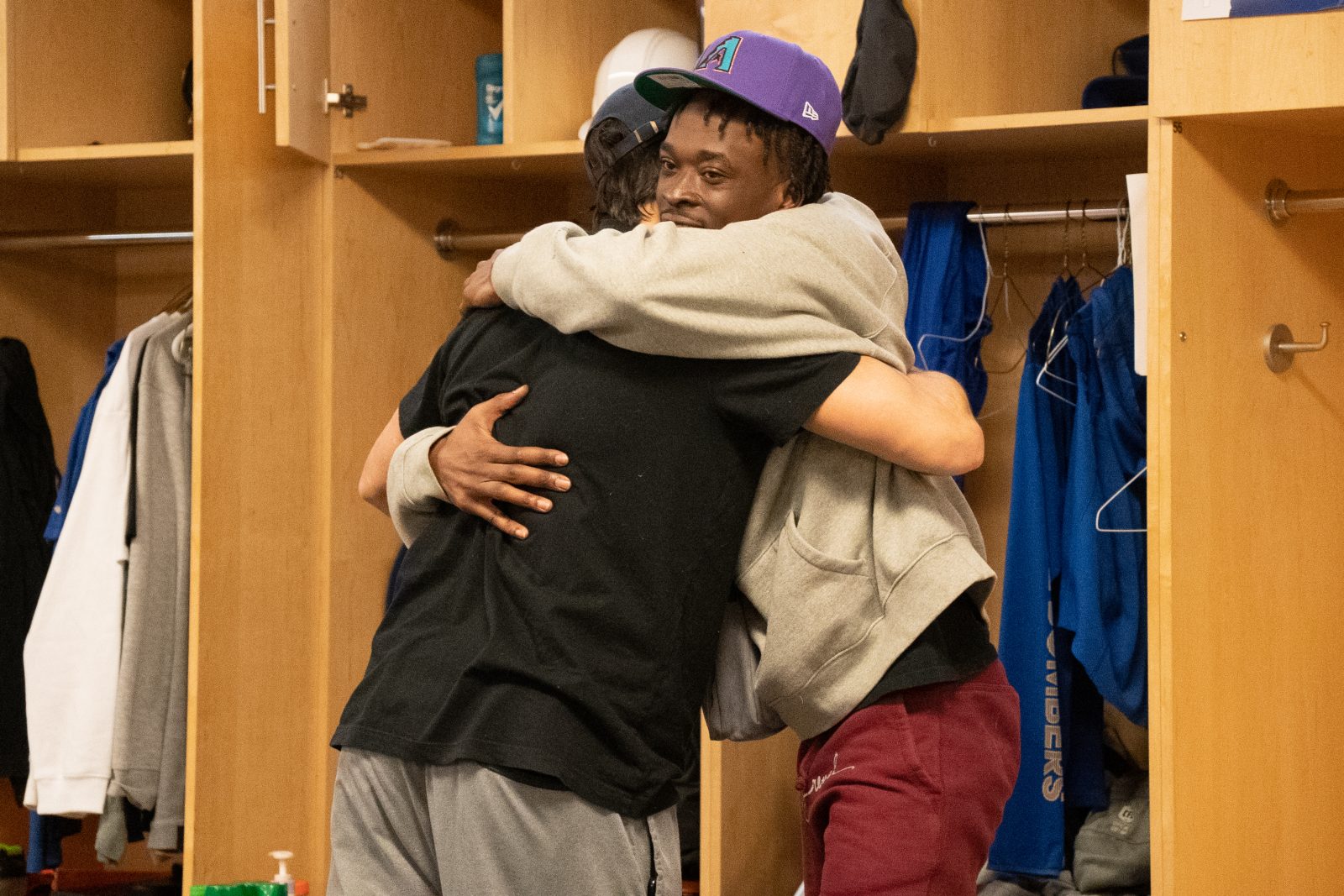 The official list from the CFL will be released in the coming weeks, but the Blue Bombers have a total of 26 players who are pending free agents, including big names like Nic Demski, Adam Bighill, Willie Jefferson, Pat Neufeld, Stanley Bryant, Jermarcus Hardrick, Greg Ellingson, Janarion Grant and Jackson Jeffcoat.

“There’s a huge list of why I’d want to come back. At the end of the day, you just never know in this league; the CFL, it’s a nine-team league, everybody talks so I’ll sit back and evaluate and see what happens.”

Jefferson, meanwhile, seems to have already decided even if he hasn’t put pen to paper yet on a new deal.

“We’ve been doing some talking. I’m going to be back, for sure,” he said. “I just love the team. I just love the community, the organization, the fans… everything. This is where I want to be.” 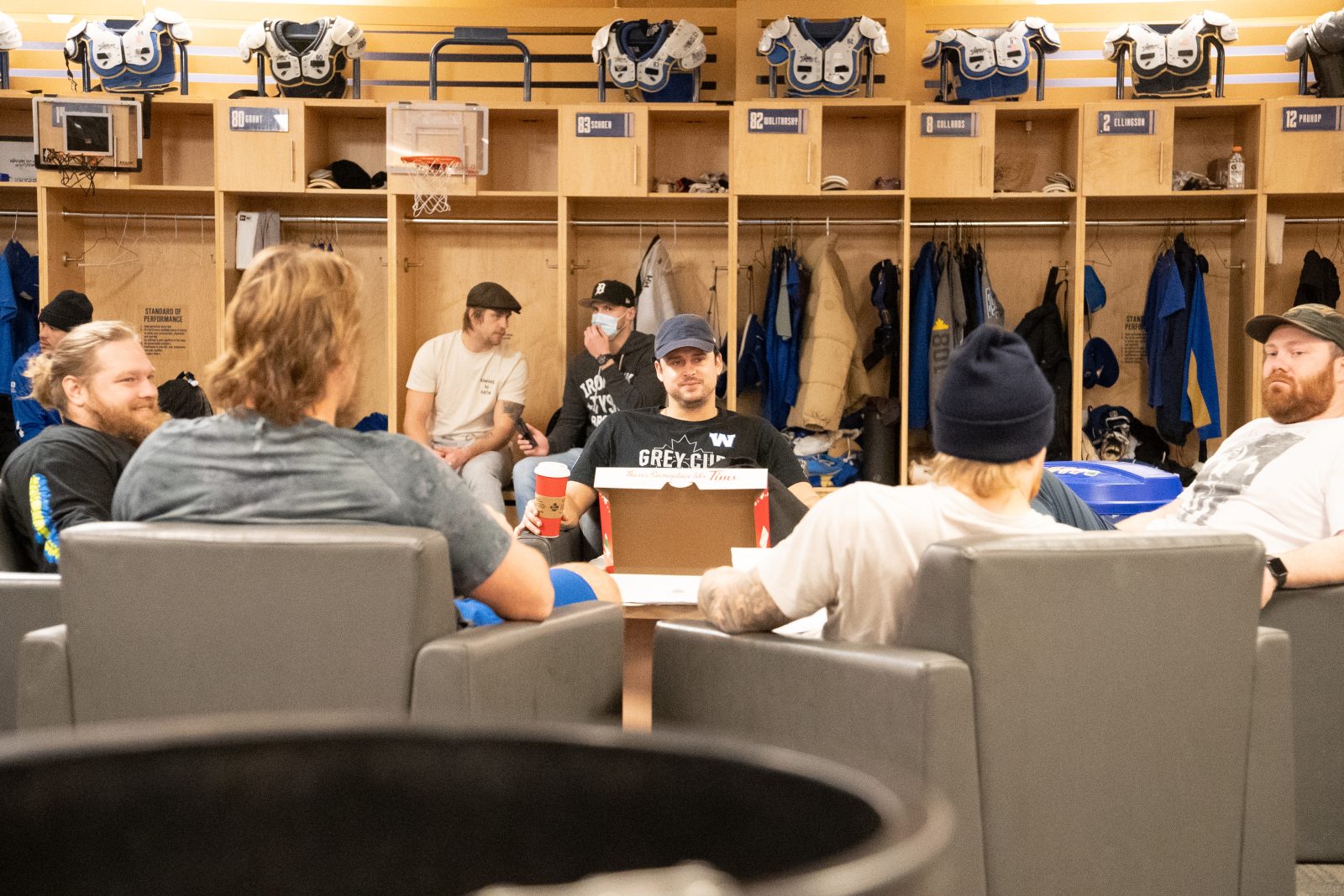 Mike Miller, the CFL’s all-time special teams tackles leader, is also a pending free agent. He turns 34 next March and there had been some speculation the veteran Acadia product might retire, but…

“I’ve already talked to my wife,” he said. “I definitely feel like I’ve got a few more years, as long as they’ll have me back. That’ll be part of the process in the offseason, to land another contract.

“This team is special and that’s probably why I was so emotional after the game. You come to that realization when you see all the sad faces in the locker room. You’ve got to look those guys in the eye and you’re thinking, ‘Did I do enough in the game?’ It is a change business, and you know it’s not going to be the same team next year. That’s just the nature of it. We wish the best for all our teammates going forward, but you wish you had that memory of being champions together.”

Just as big as any name on the pending free agent list is the status of head coach Mike O’Shea, who will likely have his season-ending press conference next week. His contract is also due to expire.

“It’s hard, really hard to think he won’t be back with him being here for as long as he has and all the success he’s had,” said Jefferson. “I don’t think there’s any doubt that he won’t be back. He’s a big piece of the puzzle. It pretty much starts with him and works its way down.”

Said Collaros when asked about his coach not having a contract: “Isn’t that how he does things?”

And when he was quizzed on how big of a piece to the puzzle the coach is, Collaros added: “He’s the biggest piece. And he probably hates that I said that.” 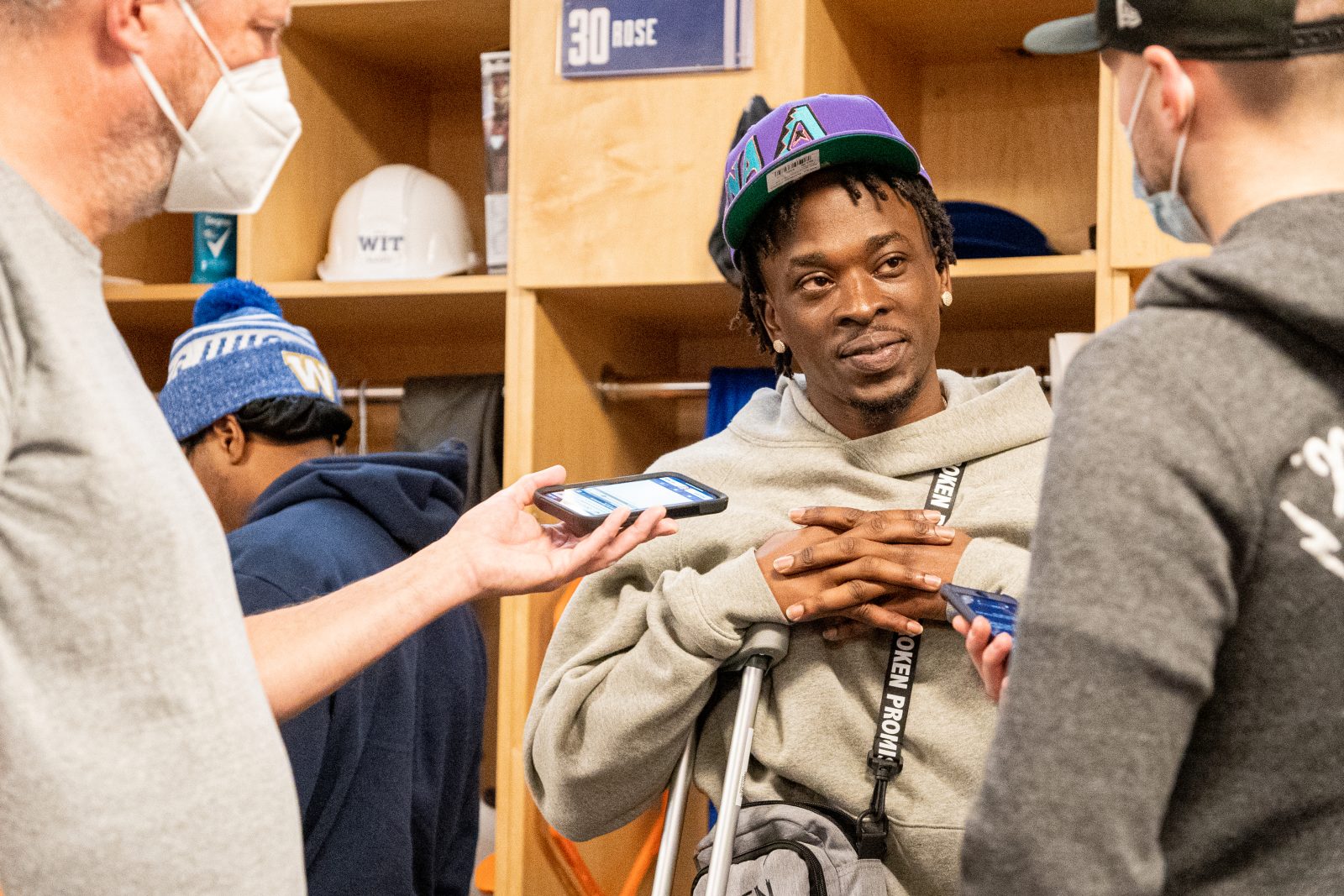 Winston Rose arrived in the locker room on crutches and wearing a boot on his left foot, even though he finished Sunday’s Grey Cup loss. The veteran cornerback said he had his foot stepped on in the third quarter.

“After the game my foot swelled up on me. I couldn’t walk. I had to hop everywhere around,” he said. “I couldn’t put a sock or a shoe on and then we had an X-ray this morning and I’ve got a crack in a bone in my foot.

“It wasn’t going to stop me. If we’d won, I probably wouldn’t even be in a boot right now.”

Kicker Marc Liegghio is feeling some heat for his convert miss in the fourth quarter after Janarion Grant’s punt-return touchdown and for then having his potential game-winner blocked.

Asked about the criticism Liegghio is facing on social media, Collaros offered a veteran take.

“You can’t read that kind of stuff,” he said. “There’s a lot of plays in a football game and there’s a lot of moments everybody wishes that they had back that could have changed the trajectory. As we always say, it’s a team game and it doesn’t come down to one particular play. We love Leggz and it’s tough the way that it ended, but I know he’s a resilient kid and he’ll be OK.” 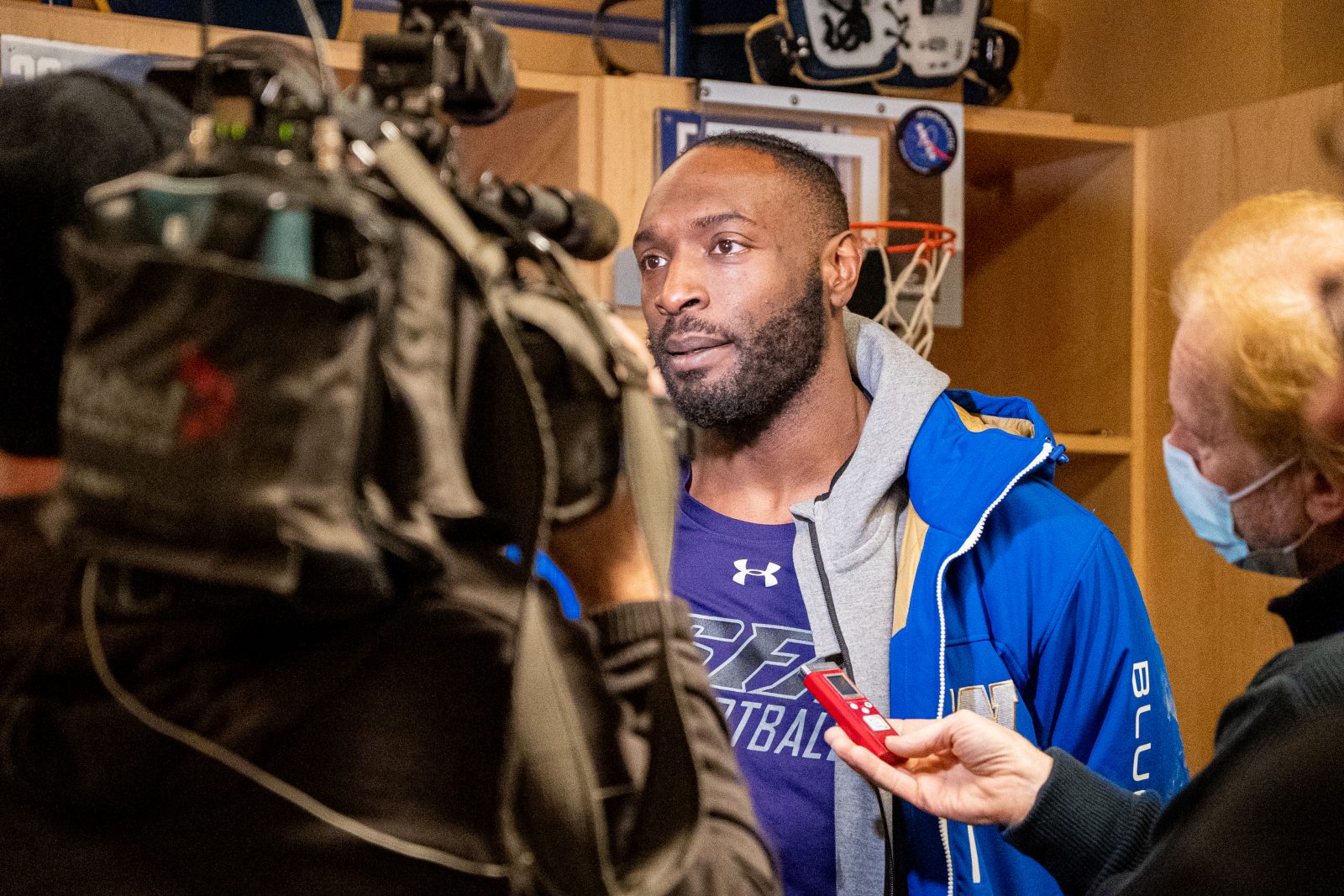 Some quotes from those who are already looking ahead to 2023…

Collaros: “I know this group has a lot of love for each other and obviously it didn’t end the way we wanted it to end. I’d imagine, knowing the character in that locker room and the guys in that locker room, there’s going to be a lot of guys that want to come back and give this thing another go.

“It’s not my place to make sales pitches, but that entire room is just a really special group. Hopefully we have a majority of people back and we can give this thing another go.”

Jefferson: “It’s going to sting for a while. But being a true athlete and student of the game and being as experienced as I am, you get over it. We’ll have another opportunity, hopefully, to be back in the Grey Cup again and maybe things will be different. You’ve just got to let it sting for a little bit and when you have the opportunity to let that drive you, you let it drive you.”

Wolitarsky: “I just saw this chart, this graph, of time spent in your life with what people and it’s amazing the amount of time you spend with work colleagues compared to your own family and your own children – it’s almost twice as much time. So, this place and this environment is so important and I’m really glad and honoured to be here another year coming back.

“I really hope to see those main pillars of the team continue to return because we do have something special. The other night we just got out-physicaled and out-played and that doesn’t sit well with a lot of us, so we’re definitely going to be hungry and come back strong.”