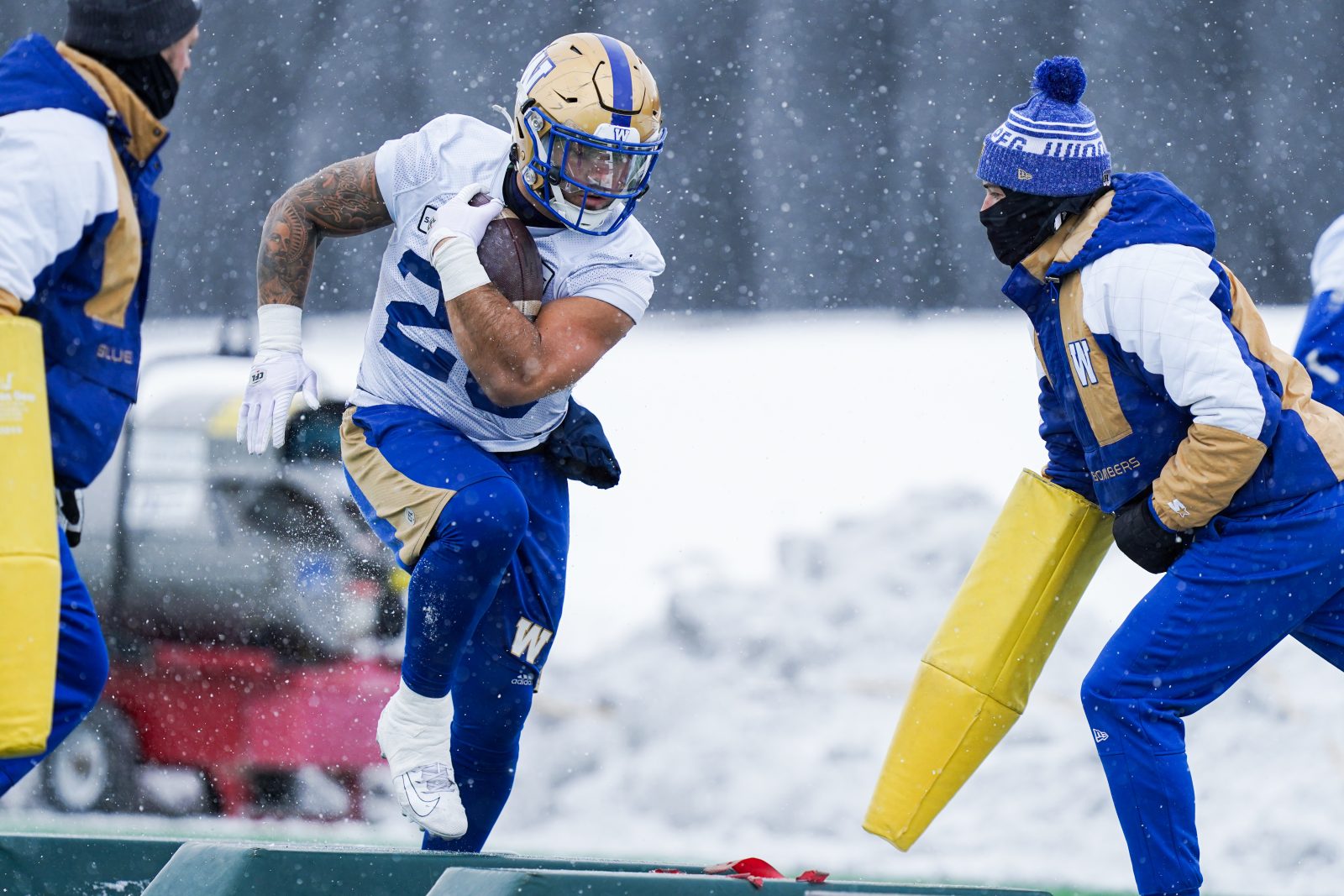 REGINA – The ‘Zach Collaros Watch’ is fully in play. The question now is whether Blue Bomber Nation should take a deep breath or officially begin gnawing their fingernails to the nub in advance of Sunday’s 109th Grey Cup against the Toronto Argonauts.

The Winnipeg Blue Bombers held their first practice of Grey Cup week on Wednesday afternoon with no sign of the club’s all-star quarterback at a snow-swept session at Liebel Field.

Just to recap, Collaros was injured in the fourth quarter of the Blue Bombers’ Western Final 28-20 win over the B.C. Lions on Sunday, appearing to twist his right ankle in a tackle from defensive end Sione Teuhema with just over five minutes remaining.

Collaros had his ankle taped and appeared ready to go back into the game, but with the Blue Bombers holding a 28-13 lead Dru Brown was behind centre for the last offensive possession. And it was Brown who took the first snaps with the starting offence at practice on Wednesday, with Dakota Prukop also getting work during the proceedings.

“You never want to have to answer questions like this, but like I tell you guys all the time I just prepare to play and if it happens it happens,” said Brown. “I don’t wish bad upon anybody, but I prepare to play.” 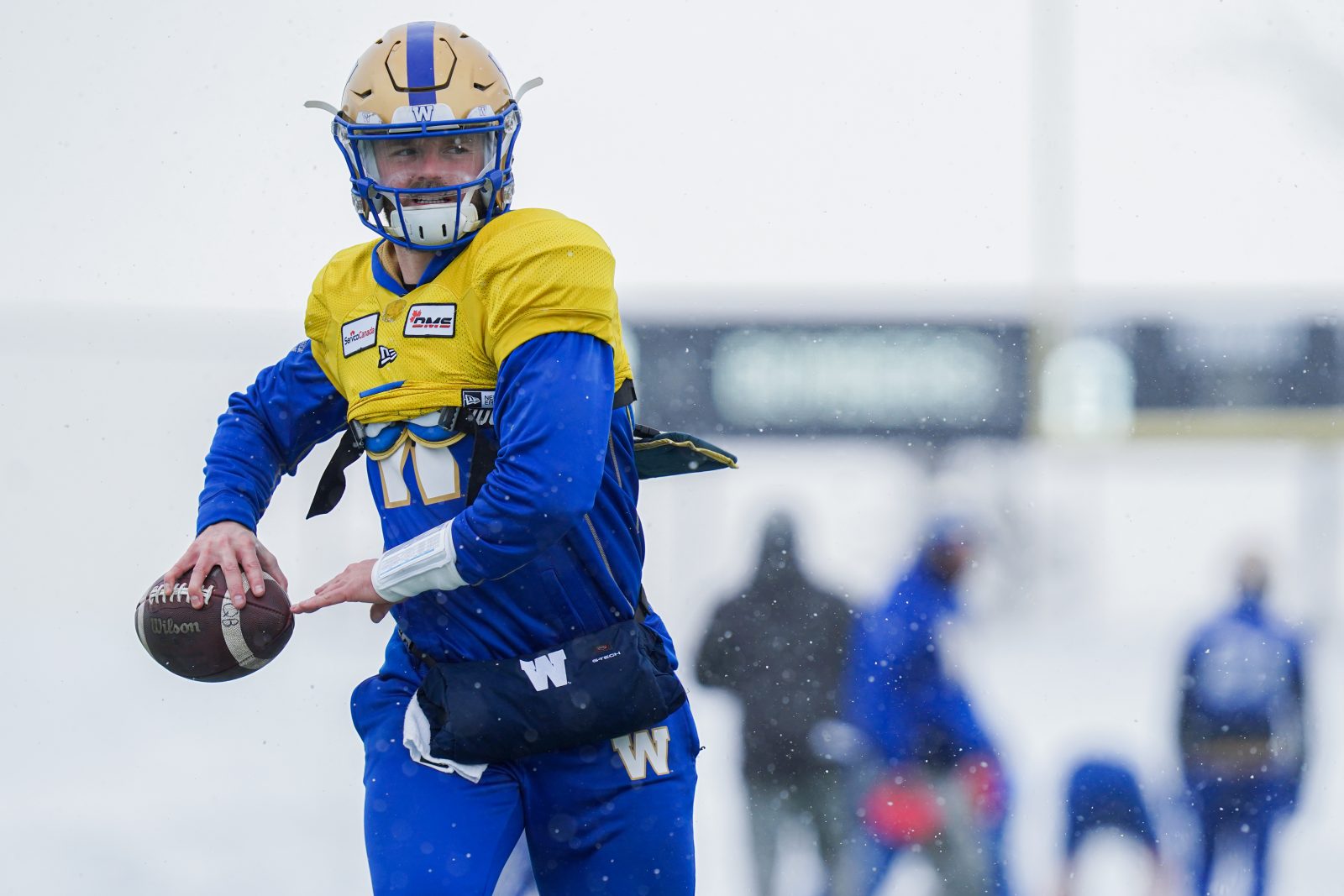 “It’s the same old story: the back-up quarterbacks prepare like a starter every week and when our number’s called it’s our job to go in there and get the job done for the team,” added Prukop.

“While you never want something like this to happen, I think we’ve benefitted from the work that we’ve gotten in the season and getting extra playing time. And then for me, personally, my package has been called a few times so that helps.”

The Blue Bombers are certainly not making any declarations on the availability of Collaros for Sunday and with Thursday’s practice closed to the media, the next opportunity to see if he participates is Friday.

Asked if he expects Collaros to play, Demski added: “I do.”

That falls in line with what we’ve heard since Sunday’s win. During his post-Western Final media session Collaros was asked how confident he was about starting in the Grey Cup and said: “Not a question” with head coach Mike O’Shea offering, “Not concerned. I think he’s going to be fine.”

And upon arrival in Regina Tuesday night O’Shea was asked about the status of Collaros’ ankle and added: ‘Pretty good. You’re not going to get much more than that. It’s that time of year.” 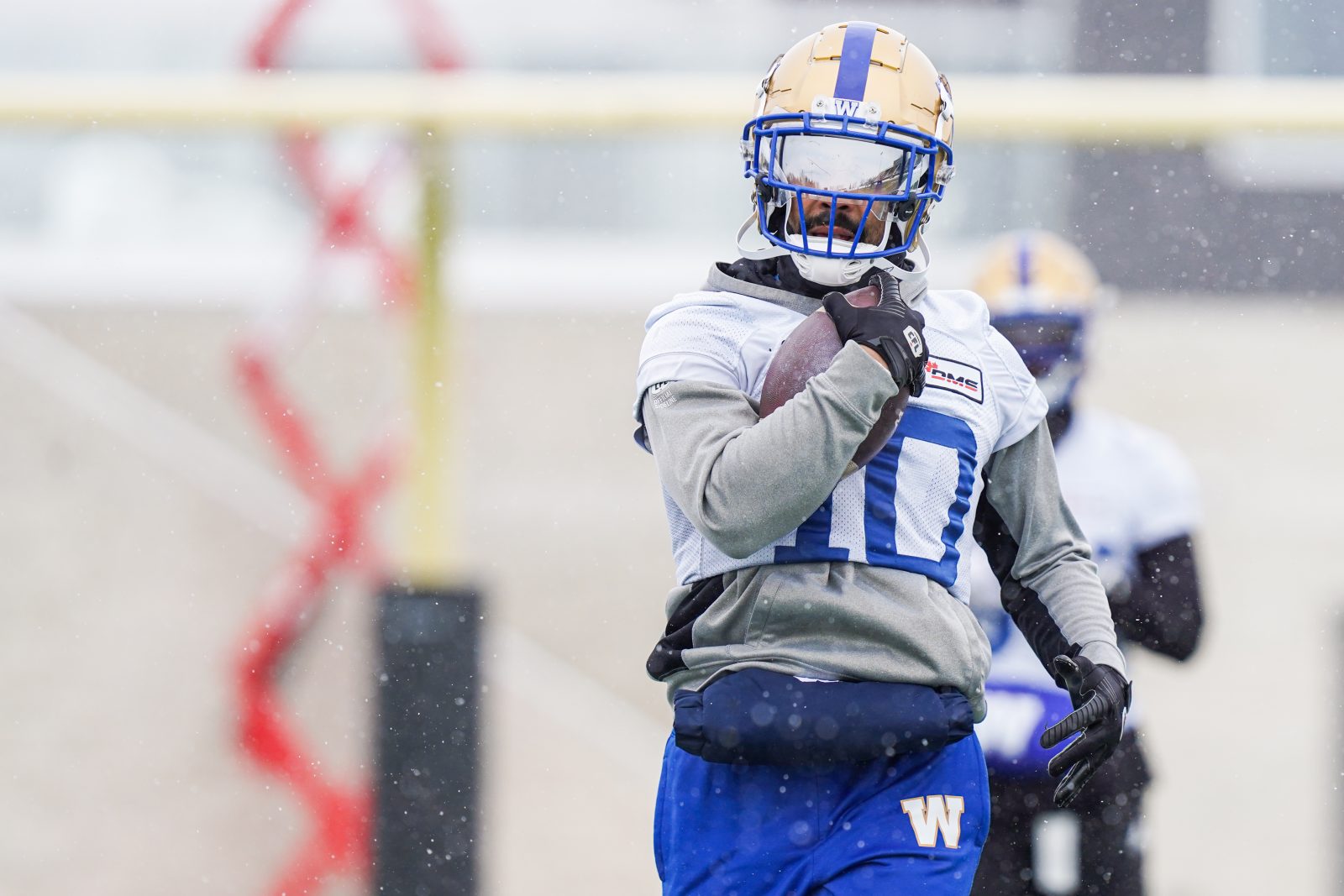 The concern does open some wounds for long-time Blue Bombers fans, who saw Kevin Glenn injured late in the 2007 Eastern Final and miss the Grey Cup and ditto in 1993 when Matt Dunigan suffered an Achilles injury late in the season.

“It doesn’t matter who’s in there, we’ve still got to execute and just do our jobs. I’ve got a lot of confidence in those guys. Dru’s showed some promise and Dakota has shown it all year as well making plays in games. They’ve got everybody in the locker room’s trust. I think they can step up and do some damage as well.”

Prukop and Brown each have one career start – Prukop’s coming in 2019 with the Argos while Brown’s debut came in the 40-32 loss to the Lions in Vancouver on October 15th in which Collaros dressed but did not see action after the Blue Bombers had already locked up first place in the West Division. Operating an attack with an entirely new offensive line in front of him, Brown completed 28 of 39 passes for 325 yards and three touchdowns and two interceptions – both mistakes being taken the distance for Pick-6s.

“Regardless of how that game went, that wouldn’t really change or waver,” he said. “I’m pretty confident in my ability to play the game and I think that’s how you have to go into every single game.” 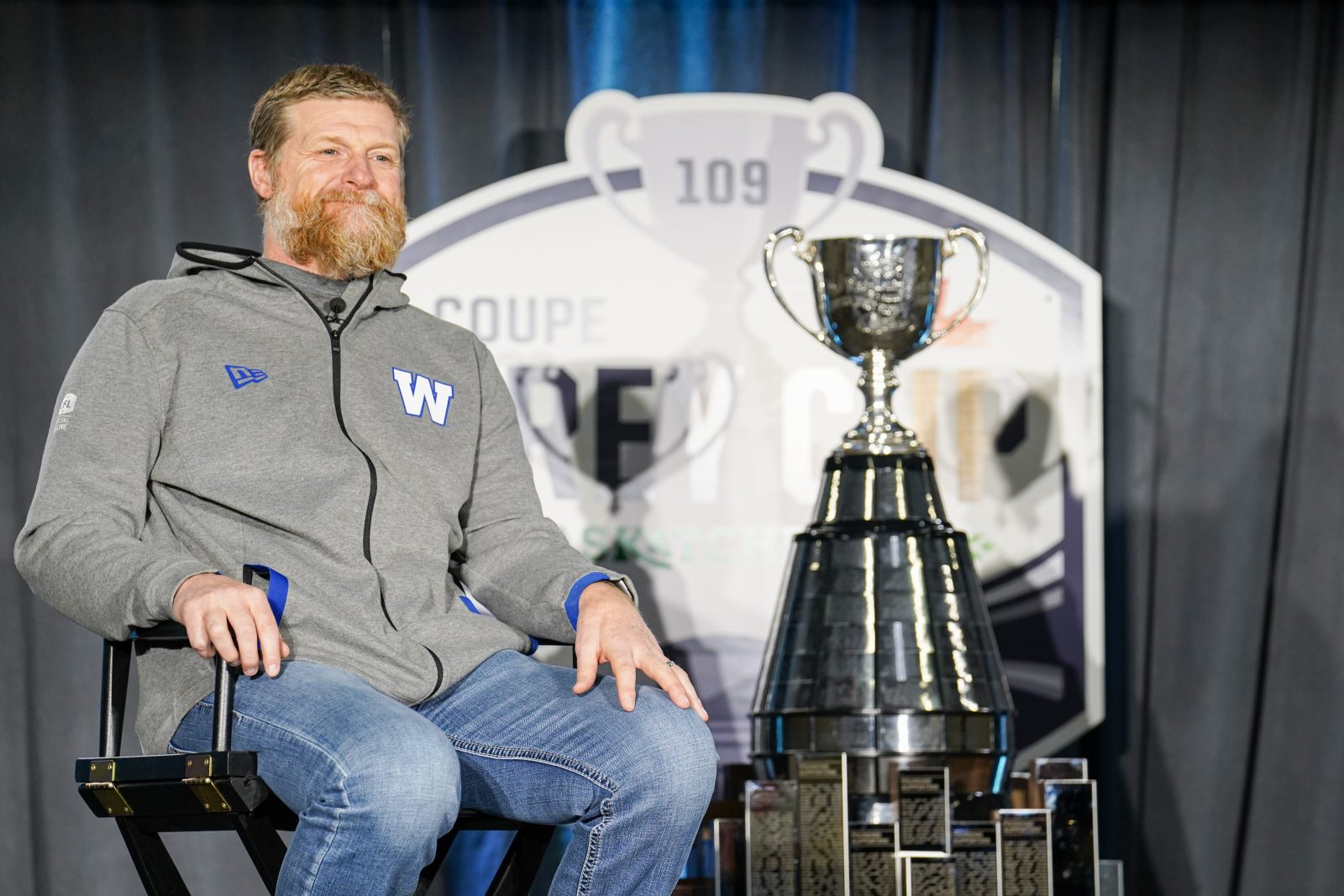 Ironically, the head coach of the Argos – Ryan Dinwiddie – is the man who stepped in for Glenn in the ’07 Grey Cup loss to the Saskatchewan Roughriders. He threw three interceptions and fumbled once but, it’s worth noting, in his next start – in late July the following year – Dinwiddie threw for 450 yards and a TD.

“Going on my history with that in 2007… I think I gave us a chance to win the game and at the end just didn’t make the right plays that we had an opportunity for,” Dinwiddie recalled on Wednesday. “It’s unfortunate we couldn’t bring a Grey Cup back to Winnipeg. I really wanted to be one of the first guys to do it, unfortunately Mike (O’Shea) was the guy to get that done. I know there were some people who were disappointed in that performance. I was excited for the moment. You want to play in big games. That’s what you look forward to as a competitor. I was really excited and thought we had an opportunity.”

And from an Argos perspective, they are expecting to face Collaros on Sunday.

“Just knowing how competitive Zach is and how tough he is mentally and physically, I knew he’d be physically available on Sunday,” said Dinwiddie. “He’s going to play, there’s no question about it.” 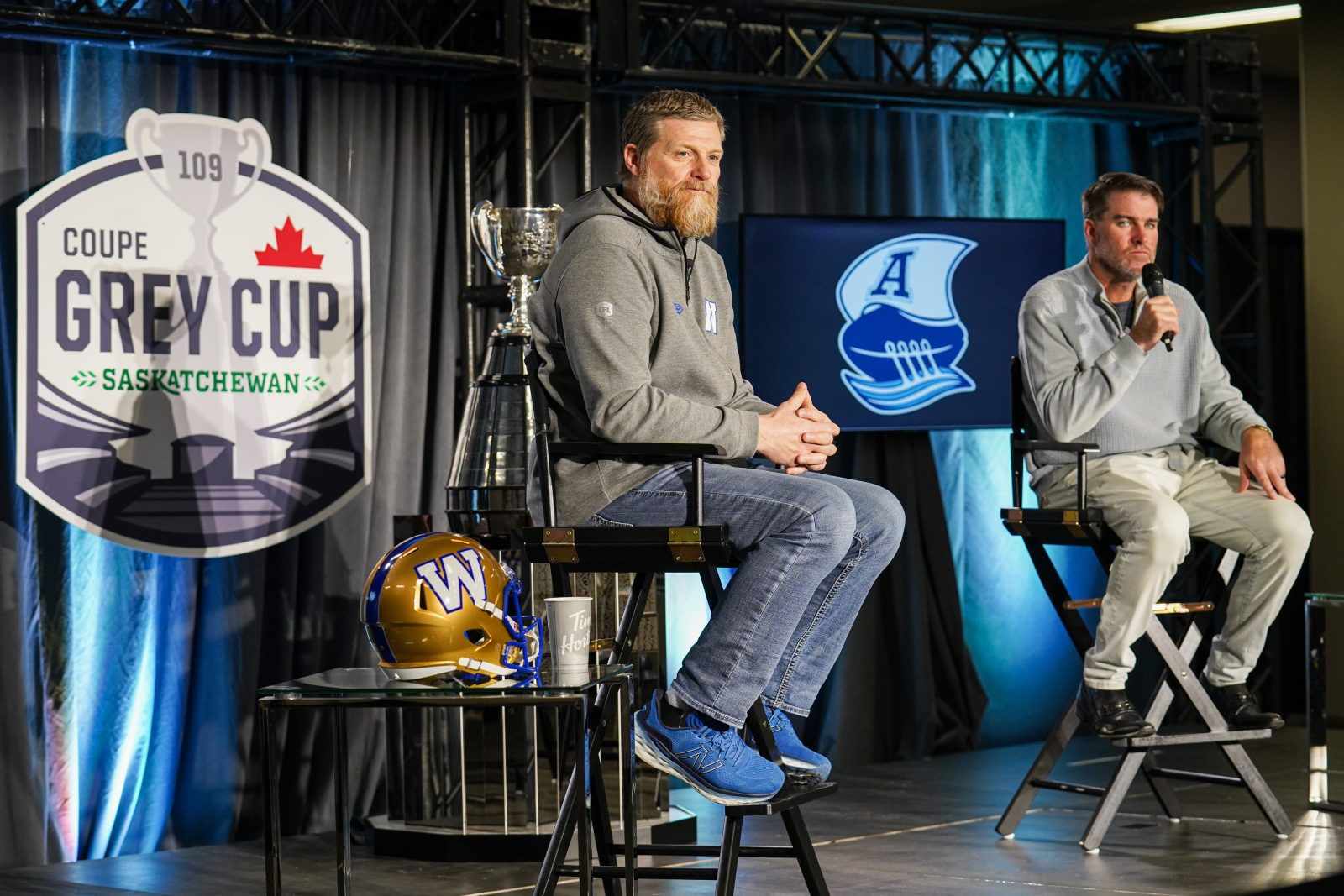 ONCE, TWICE, THREE TIMES A QUESTION:

The annual Grey Cup coaches press conference was held Wednesday morning, with O’Shea asked on three different occasions about his contract status, what with his deal expiring this offseason.

First crack: “Any doubt about your future in Winnipeg after this game?”

O’Shea: “No. If you look at the history, I always play out my contracts and figure it out at the end of the year.”

Second crack: “Why are you comfortable with that situation when it is so atypical?”

O’Shea: “I believe in the organization, believe in myself and the team around me. It’s not hard to do.”

Third crack: “Do you prefer that situation with your contract expiring and prefer it and thrive in it or would you like a longer-term deal?”

O’Shea: “I don’t spend a lot of time thinking about it, to tell you the truth. If I’m asking our players to stay in the moment and focus on the very important task at hand… I don’t waste a lot of time during the season worrying about after the season. We can fix that or figure it out after. I imagine some people would think it’s short-sighted, but I’ve also always believed that contracts are really about what you’re going to do going forward, it’s not about what you did in the past. Judging by my answer you can tell I don’t even put a lot of thought into that.”

Bonus round: “Never mind your contract status, is it fair to say…

Reporter: “Are you committed to them beyond this season?” 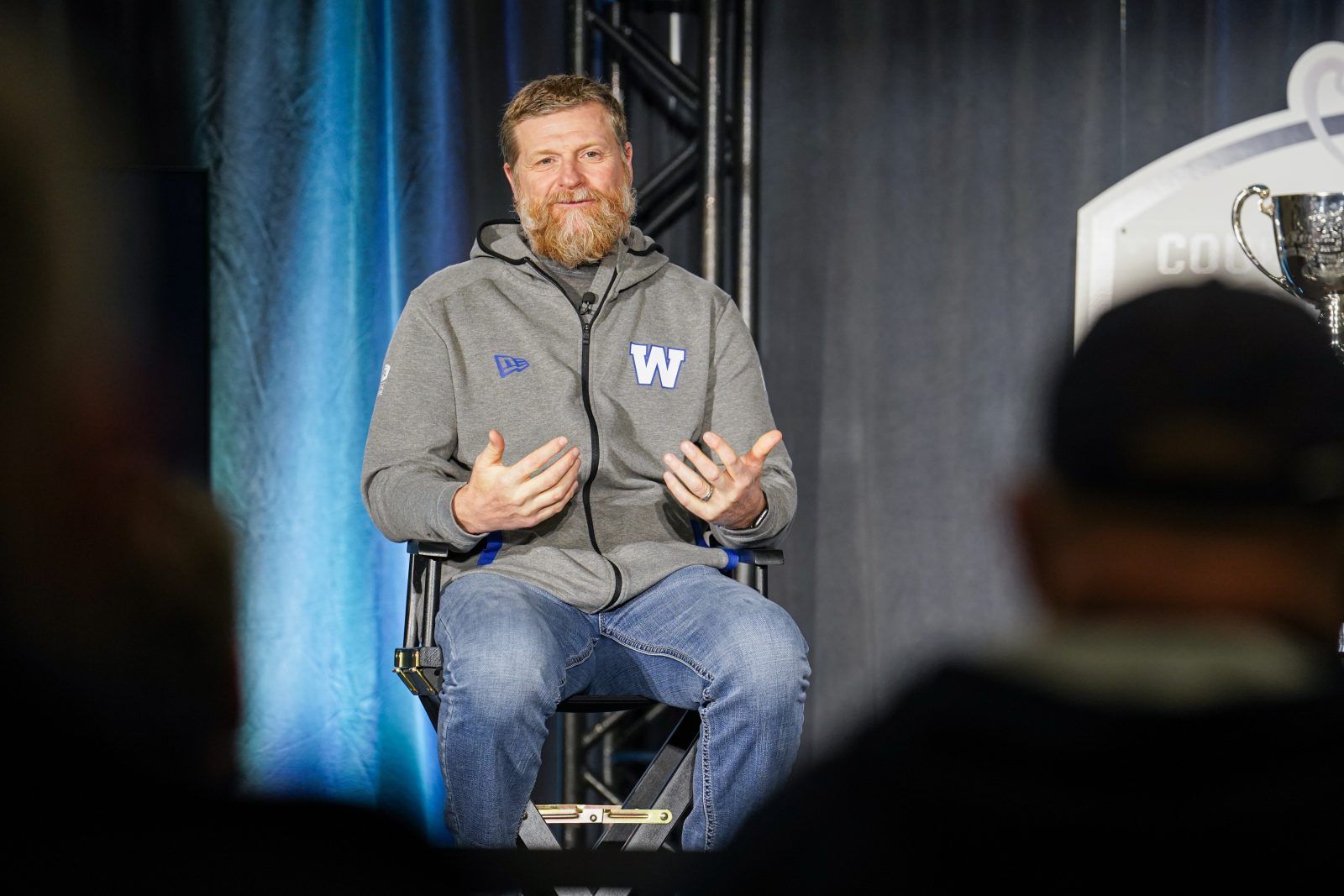 Blue Bombers defensive coordinator Richie Hall is a Regina resident during the offseason and remains a popular figure in a town where he played and coached.

“He is the ultimate, authentic coach,” said O’Shea of Hall. “He does not apologize for anything in terms of the way he is. He’s first and foremost a great man, a great human being. I enjoy every single day interacting with him, just popping into his office, just sitting down and shooting the breeze about life in general, not just football.

“The players, not even just the defensive players but the entire team sees just an authentically genuine, kind-hearted good man, which can sometimes be difficult in this profession, to remain so kind and good natured besides having 35 – I don’t know how many years he’s got – all that experience. He’s very smart, he’s got great recall on defensive systems and how offences attack as a leader with his staff he absolutely welcomes all input from everyone. He’s not a control guy. He wants his staff members to have great input on game planning. He’s just great to work with. Love the man.”