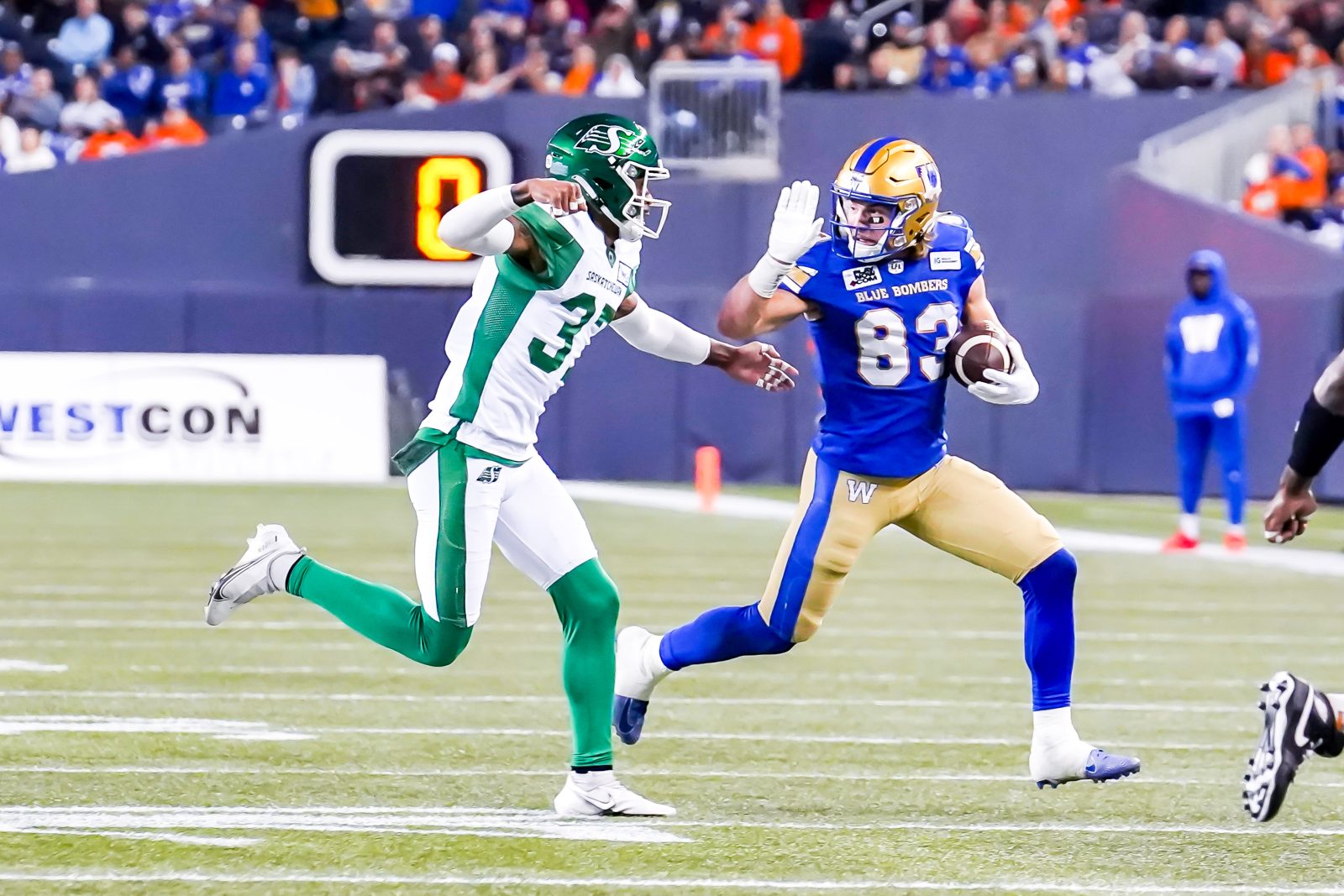 Let’s begin with a number. A series of them, actually, which say absolutely everything about the 2022 edition of the Winnipeg Blue Bombers: Through 15 games this season – 13 of them wins – the fellas in blue and gold have now out-scored the opposition 142-60 in the fourth quarter for a +82 points differential.

Only three times this year have the Blue Bombers been outscored in the final 15 minutes or overtime, twice in wins, and once in the OT loss to the Montreal Alouettes.

Those totals were only built on further in Friday’s 31-13 win over the Saskatchewan Roughriders, as the Blue Bombers spotted their rivals a field goal three minutes into the final frame and then came alive in a flash with two Zach Collaros TD strikes, the first to Nic Demski and the second to Dalton Schoen.

Those two scores turned a 17-13 game into an 18-point win, but it was how it unfolded that was so revealing. Leading 17-3 at the intermission, the Blue Bombers attack went dormant in the third quarter, managing just eight yards on three possessions as the Riders rallied.

And Winnipeg didn’t answer with methodical drives, but delivered the two scores in four plays total, capped with a 46-yard pass to Demski and then a 64-yarder to Schoen. Game, set and three-match sweep of the arch-rivals.

“It’s just the guys on this team, in that locker room,” said Schoen when asked to explain the sudden fourth-quarter explosion. “We have the ability to go out and do that at all times. I’d have to go back and look at the film in the third quarter to figure out what went wrong. I knew when it was happening it wasn’t a good feeling when you’re on the sideline a bunch watching the defence and we’re putting them in probably bad spots.

“But we’re confident that when we go out there, we can strike quick like that every single time and so it’s only a matter of time, if we do things right, for that to happen.” 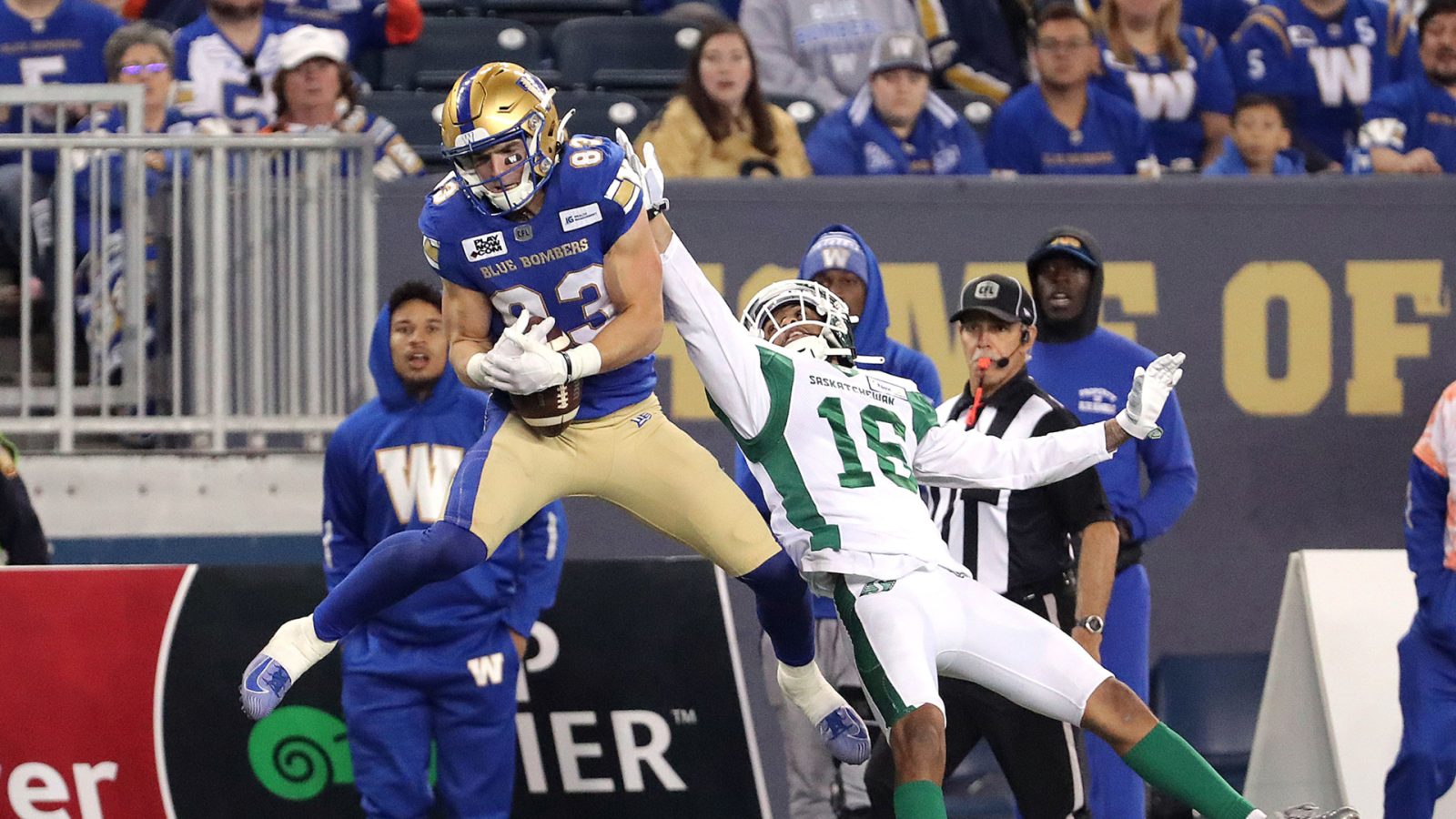 A FUNNY MOMENT, POST-GAME… as Schoen was conducting his interviews in the media room while Demski sat at the back watching and waiting for his turn. As Schoen wrapped up his session, Demski piped up with:

“Dalton, I’ve got a question: how’d you become such a dog?”

Naturally, as Demski then slipped behind the podium – and with Schoen still in the room – the first question to him was: ‘Nic, how did you become such a dog?’

“Honestly, it goes back to the guys in the room,” Demski said with a grin. “We’ve got guys at every position all around the locker room that push each other in practice, on game day, everything. I mean, you’ve got to come in with that dog mentality if you want to put the blue on. That’s just the culture of this team.”

SO MUCH ABOUT THE BLUE BOMBERS’ SECOND TRUTH AND RECONCILIATION GAME… was special and it clearly means a great deal to the Indigenous community.

Sometimes it’s the simple things that matter most, like seeing ‘Blue Bombers’ and ‘Roughriders’ in Ojibwa and Cree, respectively, on the two club’s orange jerseys in warm-up. It was also significant to see Brian Chrupalo, of Metis descent, announce penalties in both English and Ojibwa, and there’s a sense this event is only going to further grow in the future.

🔊: For the first time in #CFL history ⤵️

To bid on the orange jerseys worn by the Blue Bombers – the proceeds going to the Winnipeg Aboriginal Sport Achievement Centre, click here.

COLLAROS, THE CFL’S REIGNING MOST OUTSTANDING PLAYER… is having a banner season. His 3,874 yards passing, and 32 touchdown passes are career bests, with the 32 TD tosses leading the CFL.

Blue Bombers fan Jon Baylis marvelled at the Jacobs’ totals from the 1950s when yours truly tweeted out that list on the weekend, commenting that number would be the equivalent of 60 TD passes in this day and age.

That prompted this cool response from Chris Sinclair, @Stats_Junkie:

Collaros, FYI, has now gone 12 straight games with at least one TD pass and has 10 in the last three.

WHILE WE’RE THROWING OUT NUMBERS AND THEIR HISTORICAL CONTEXT… Schoen has set a new club record for receiving touchdowns by a first-year player with 11.

And all of that means zilch to Schoen – for now, at least.

“That’s not really something I think about or have given thought to,” he said. “It’s an honour and it’s really humbling to have that happen. It’s really special in hindsight. Like I’ve told you guys all along, it’s not something I think about. I just want to go out there and help the team be successful, however that looks. My thought process is to just go 1-0 on every play, do my job, win my reps and if you do that enough good things will happen.

“(Hitting the 1,000-yard mark) is definitely something I’m going to look back on and it’s going to be really special. I’ve never had a 1,000-yard receiving year at any level of football I’ve played. It’s not something that’s on the forefront of my mind. I’m focused on winning games and that’s it.” 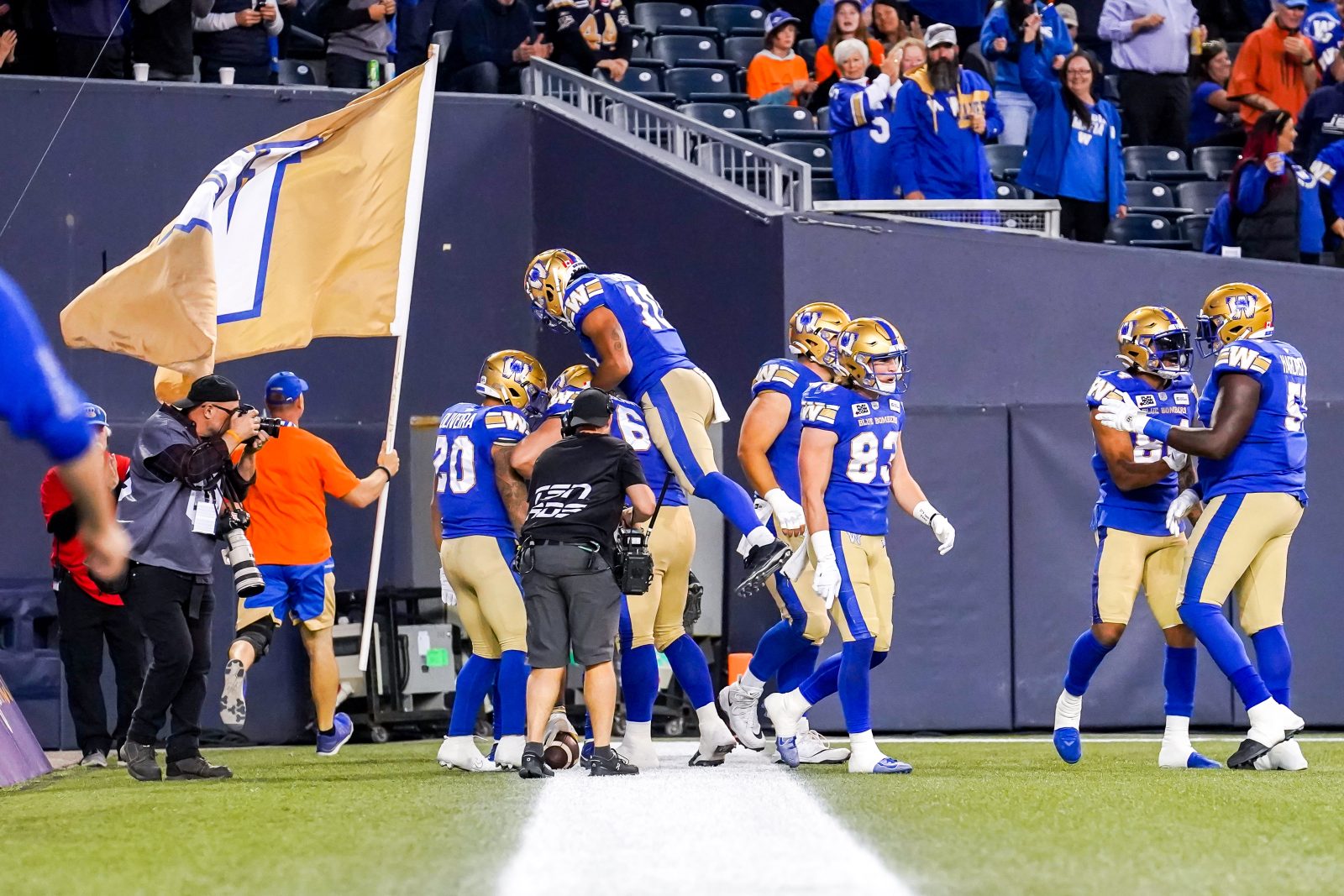 CHECK THIS OUT, BOMBER NATION… because through seven home games this year, the Blue Bombers are averaging 29,562 fans at IG Field. That’s a big number helped by two consecutive sell-outs and four straight games with crowds of over 30,000.

Here’s the interesting part, after double-checking with CFL stats guru Steve Daniel – dating back to the official inception of the CFL in 1958, Winnipeg has never led the league in attendance.

Yes, that’s a reflection of the recent struggles in attendance powerhouse markets like Edmonton and Saskatchewan, but that shouldn’t take the shine off what the Blue Bombers have done to make IG Field a tough place to play for the opposition.

And with two games remaining – three if the now-guaranteed playoff game is included – the Blue Bombers could average over 30,000 for just the second time in franchise history. In 2013, the year IG Field opened, the club averaged 30,637.

The players – both here in Winnipeg and around the CFL – certainly notice. And this quote from Adam Bighill post-game attests to that:

“It’s awesome. The support we get here in Winnipeg is incredible. The energy we’ve been able to bring back to the city and the pride is so much fun to see evolve.

“I just want to keep bringing that energy for the city, for the province. So many people are so hyped about what we’re doing right now and what we’ve done. It’s fun. And it’s fun that a lot of people want to be a part of it.”

AND, FINALLY… it wasn’t an easy few days for Blue Bombers receiver Rasheed Bailey, who spoke earlier in the week about a shooting at his old high school in Philadelphia.

That prompted this ‘Stop the violence’ response from Bailey after his touchdown Friday, which gave him a career-best six on the season.