“It’s significant for our people to be included” 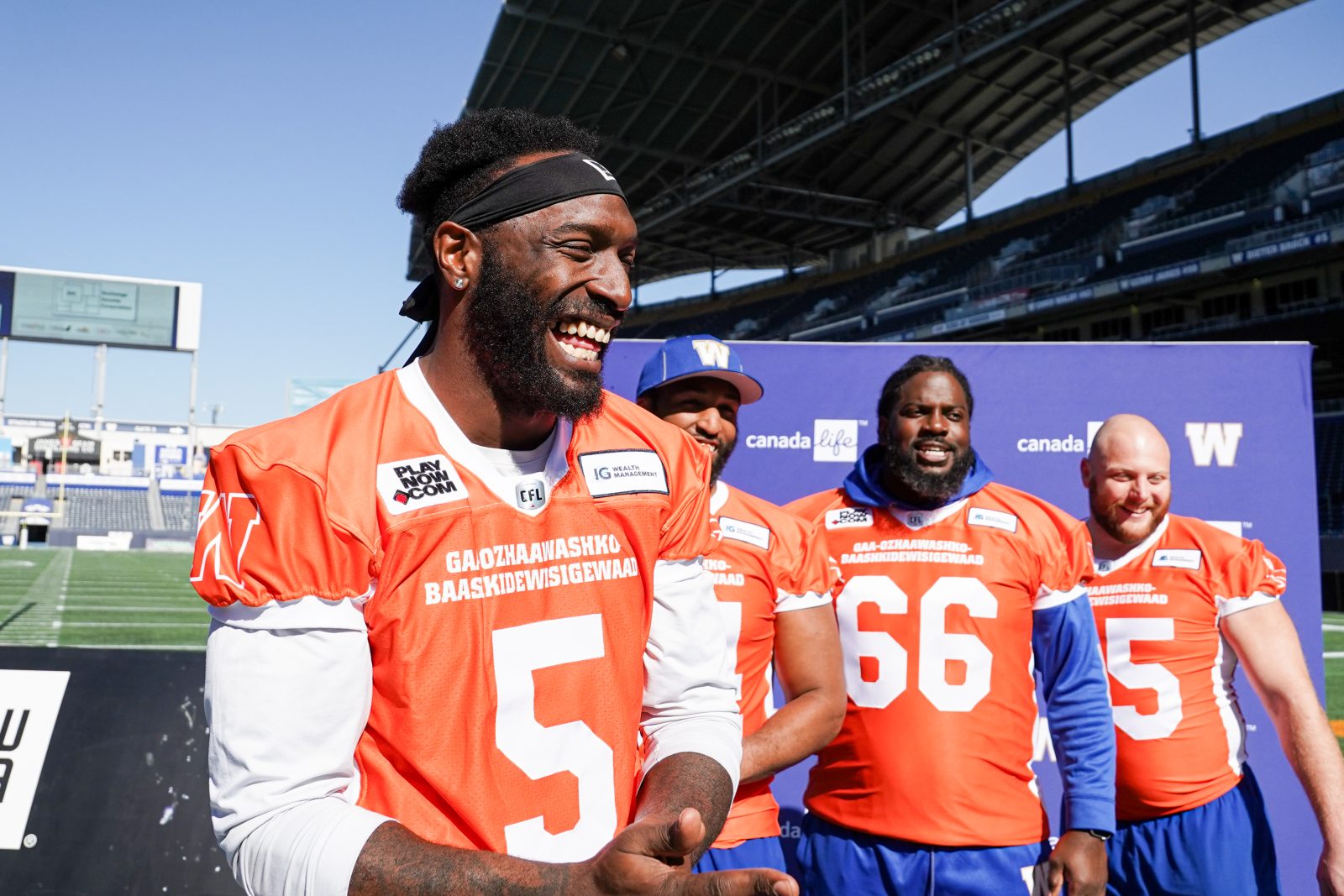 “It’s significant for our people to be included”

It is a small, yet powerful gesture which represents so much – and especially so on the National Day for Truth and Reconciliation.

The Winnipeg Blue Bombers and Saskatchewan Roughriders will wear orange jerseys in the warm-up prior to Friday night’s meeting at IG Field. And emblazoned across the front of Winnipeg’s jersey – where the words ‘Blue Bombers’ normally appear – will be this, in Ojibway:

The translation, although there is no direct translation for ‘Bombers’, is: “They are blue and making explosions.” The name was gifted to the team and translated by Patricia Ningewance, a professor of Anishinaabemowin at the University of Manitoba.

“This is unique and unprecedented in many ways and I’m thankful we are able to be a part of it,” said Manitoba Keewantionowi Okimakanak Grand Chief Garrison Settee at a press conference in the south end zone of IG Field on Thursday.

“This is like decolonization one step at a time. They were once trying to take away our language and now we’re promoting it. That speaks volumes of the team’s commitment to reconciliation. This is also reconciliation in action. It’s corporate responsibility stepping up and allowing Indigenous people to be involved in occasions such as this.” 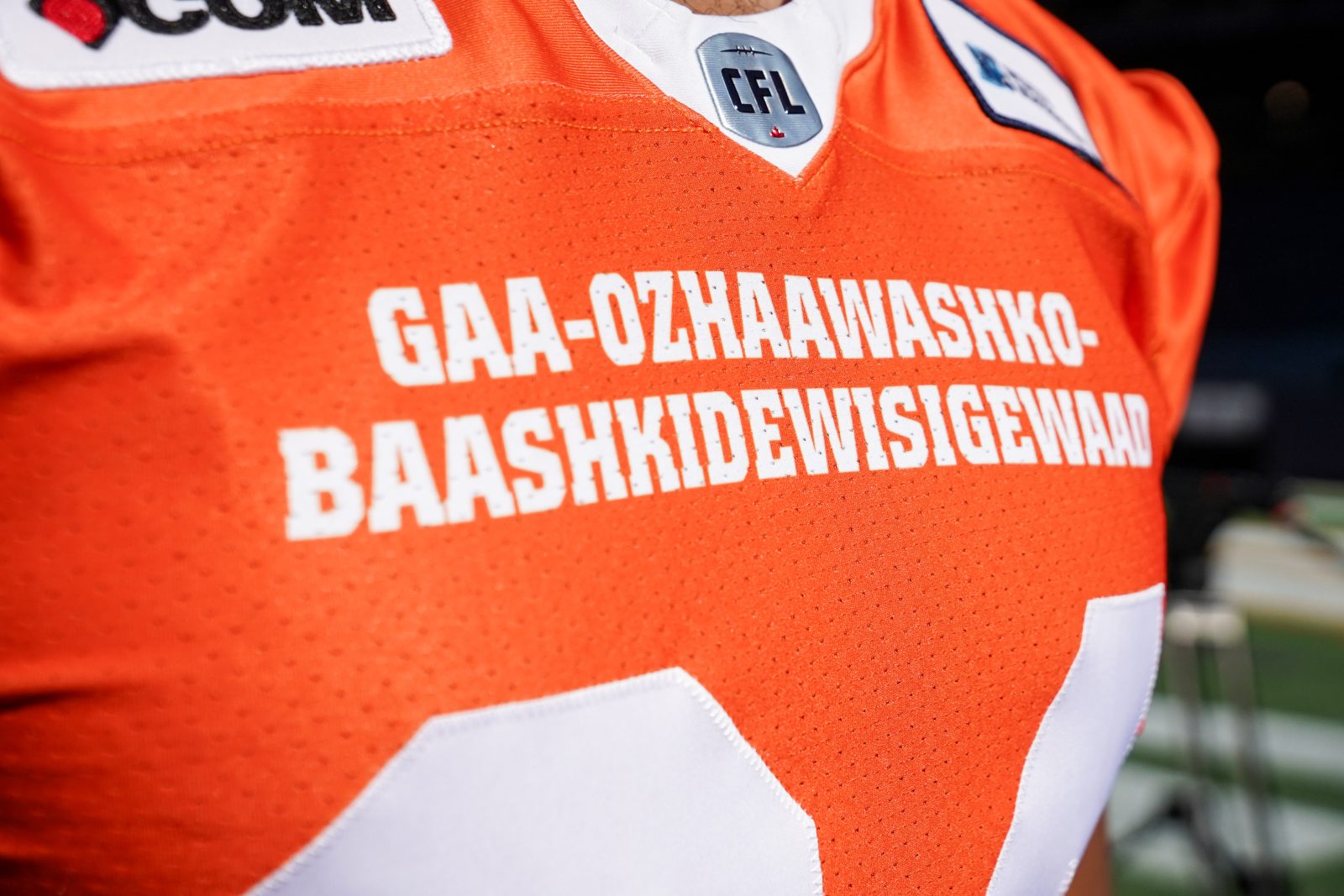 There are many components to the Blue Bombers second Truth and Reconciliation game, with the club working with Exchange Income Corporation (EIC) to make it a reality. The partnership will see 1,000 members of Indigenous communities in Northern Ontario, Northern Manitoba and Nunavut flown into Winnipeg for the game.

The jerseys worn by the Blue Bombers will be available via online auction after the game, with the funds raised donated to the Winnipeg Aboriginal Sport Achievement Centre. The Blue Bombers will wear the star-blanket logo created for them last year on their helmets.

The Roughrider Foundation, meanwhile, will use their orange jerseys in a raffle to help fund Indigenous sports programs and special events in Saskatchewan. As well, the national anthem will be sung in Ojibwe by Strong Warrior Girls Anishinaabe Singers. Pow wow singers, dancers and drummers featuring Ray CoCo Stevenson and the Walking Wolf Singers will lead the team onto the field prior to kickoff.

Leaders from the Indigenous community will take part in the ceremonial coin toss before the game and the halftime show will feature Norman Chief Memorial dancers.

“Every year this is going to grow, and this will continue to be our Orange Shirt Game going forward,” said Blue Bombers President and CEO Wade Miller. “It’s such a good opportunity for us as a community to acknowledge and recognize what’s occurred and learn from it.

“We want to set the example for how a business can engage and try to make a difference.”

The Blue Bombers have been front and centre with that for several years, as IG Field was the first sports venue in North American to include a now commonplace land acknowledgement statement before every home game. 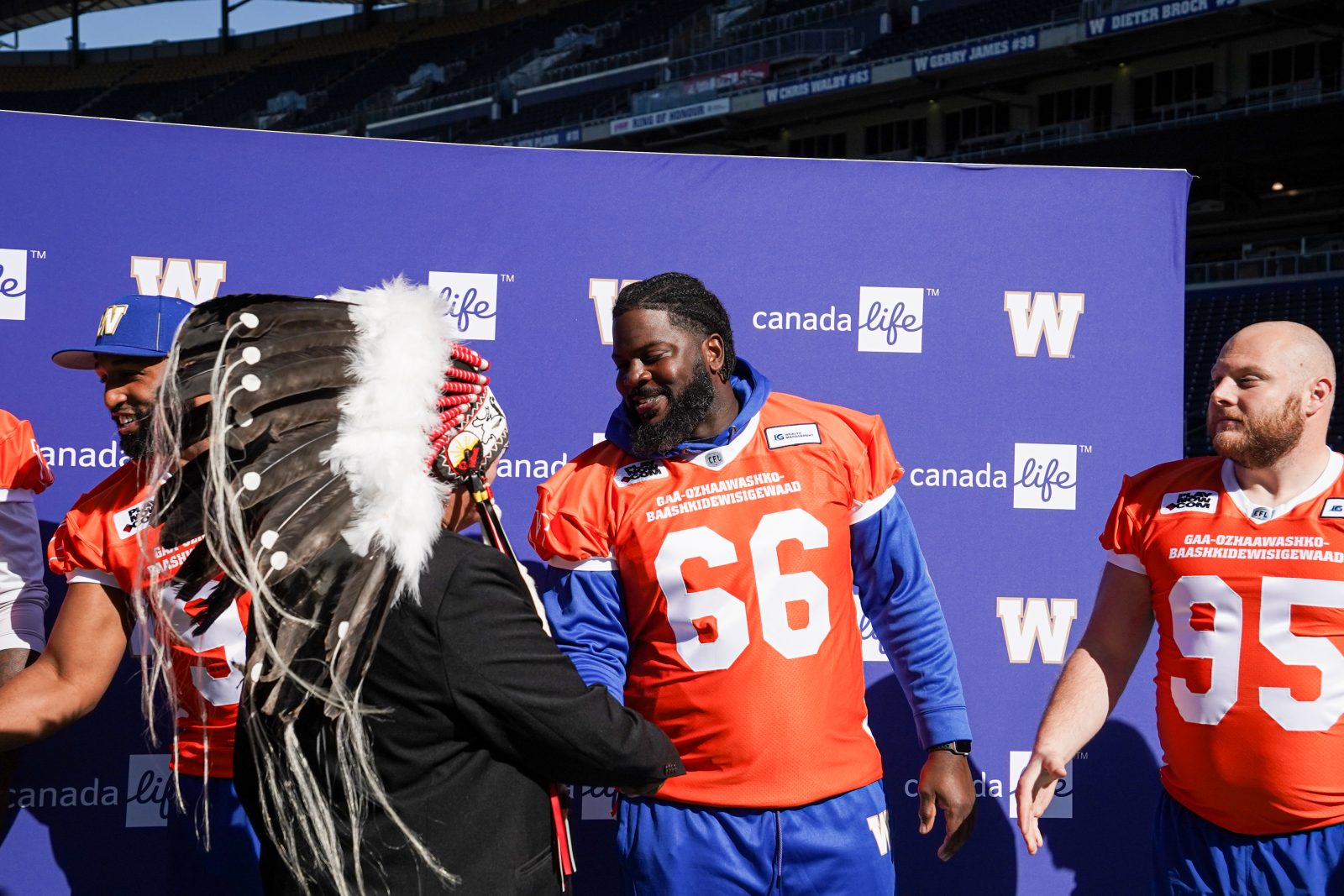 “One of the things the Blue Bombers have done since Day 1 is to be on the cutting edge of this,” said EIC CEO Mike Pyle. “It started a few years ago by bringing in one First Nations community per home game to have them experience that. With COVID that came to a screaming halt.

“But it’s our goal to help make it front of mind so that others can follow and help with this. If we do this the right way, it can be such a positive step. We want to open people’s eyes and then prime the pump.”

Friday’s crowd is estimated to eclipse 30,000 and in addition to the 1,000 fans being flown in from the north, an additional 1,000 members of Indigenous communities from around Winnipeg will also be in attendance.

“It’s very significant for a lot of people as we acknowledge the national day for Truth and Reconciliation,” said Grand Chief Settee. “Bringing youth from all over to recognize that, but also to experience the Blue Bombers in action, is important. Most of them have only seen them on TV and couldn’t imagine seeing them on this field. To bring them together is an awesome undertaking, and it’s significant for our people to be included and for our Residential School survivors to be honoured.

“It is a very significant step and we’re thankful that step is being taken. As we continue to build, we can do more things together and Reconciliation can impact not only our people, but those who want to learn and address the things that happened in the past and make sure things are rectified in ways that are honourable. That’s exciting.”