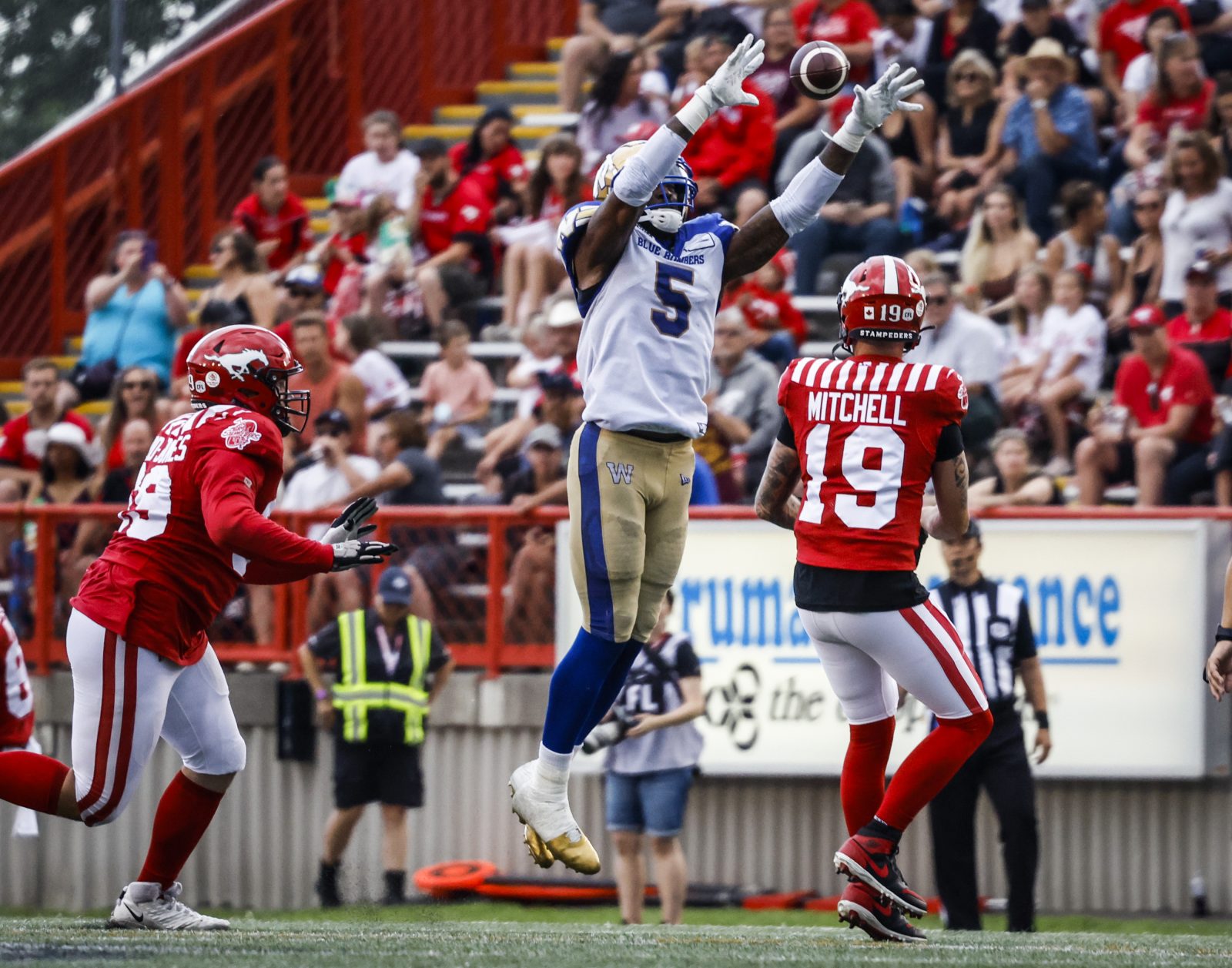 It’s not just part of the gig; it’s a requirement some players truly enjoy while others see it as a necessary evil.

And so, when Brady Oliveira was pulled out of the Winnipeg Blue Bombers raucous locker room Saturday night for his media interviews, the young running back understood the request simply comes with the territory, especially after cranking out 110 yards on 15 carries as part of a 35-28 victory that extended the club’s record to 8-0.

And as he wrapped up an answer to the first question, the Winnipeg product nodded toward the noise emanating from a nearby door and said “Great feeling. That locker room’s pretty amped up right now, so I want to get back in there.”

There’s a lot to unwrap in the wake of the Blue Bombers’ win Saturday night which, given all the circumstances swirling about it including the gruelling travel schedule and the Stamps being at home after a bye week, is as impressive a result as imaginable for a July showdown.

Yet, even with the superb work by Zach Collaros, the continuing emergence of Dalton Schoen, the two-touchdown return to the lineup for Nic Demski, the defence limiting Calgary’s Bo Levi Mitchell to 219 yards passing – we could go on and on here – it was the work of Oliveira that might just be the most important development.

See, so much of what the Blue Bombers have accomplished over the last few years has been built around dominating the line of scrimmage both offensively and defensively. And as the ground game was more miss than hit over the start of the 2022 season, there were the predictable criticisms about letting a future hall of famer in Andrew Harris exit in free agency, especially as Oliveira entered the week with a 3.4-yard rushing average – easily the lowest among starting tailbacks in the Canadian Football League. 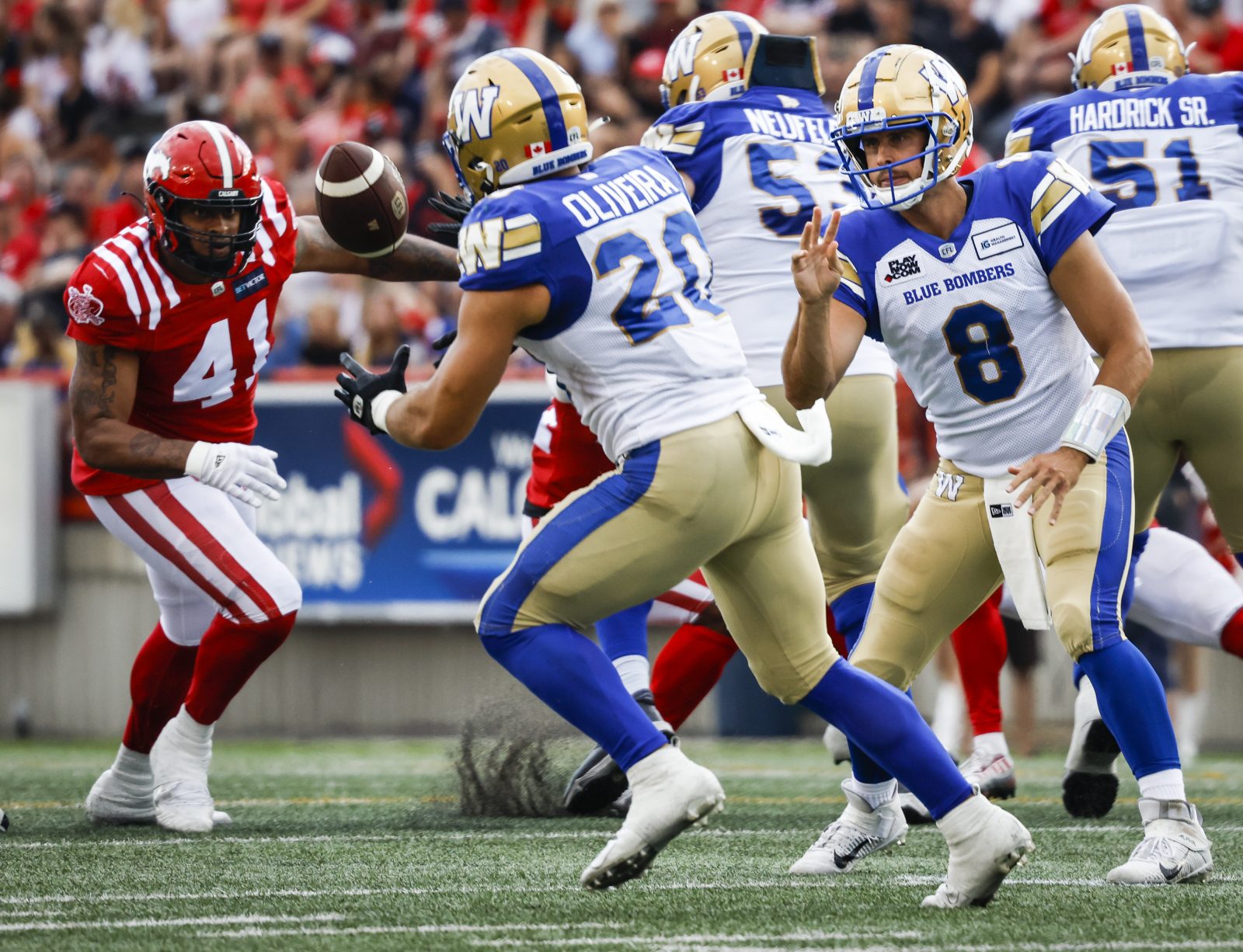 Then came his handiwork Saturday against the Stamps – the same team that had limited him to eight yards on nine carries just two weeks ago – in which he averaged 7.3 yards per carry, and had four runs of over 10 yards, including a season-high 31-yard romp.

“I want to say that looking back at earlier in the season I was really – I don’t know if you want to call it the pressure – but I was trying to get the big hitter and waiting for the big hitter,” Oliveira explained. “I was tiptoeing and not playing Brady brand of football which is being a north-south physical runner, hard-hitting violent runner.

“I got back to that last week, and I had some great talks with the guys in the locker room, great talk with the coaches, and get back to the football I’ve been playing my entire life. I think I showed that today.”

Bringing this back to the top, that’s partly why Oliveira wanted so desperately to get back to the locker room – back to the people that really matter to him – after weeks of being under the microscope and hearing some criticism from outside the walls. Oliveira is really only beginning his first full season as the club’s No. 1 back after spending two years mentoring under the man he is now replacing in Harris.

Saturday’s game was just his 23rd as a pro and his 14th start, including six last year in a season in which the duties were shared between Harris, himself and Johnny Augustine. When this season opened with some inconsistencies in the ground game, he vowed to block out the ‘noise’.

Easier said than one – check that, it’s virtually impossible – in this age of social media.

“There’s definitely been critics out there,” Oliveira said. “For me, this means so much to me with me being a Winnipeg kid and playing for my hometown and seeing people out there not believing in me, Winnipeggers not believing in me… Yeah, it upsets me, hurts me because I want to make this city proud.

“A game like that, showing them that I’ve got some speed, I can make people miss, I can get some long runs is definitely great for my confidence. That game shows I’m making my teammates proud, making my coaches proud and going out there and getting the ‘W’.

“.. I feel really good right now. The guys up front have my back, they’ve had my back this entire season. The coaches have had my back. Let’s just keep this thing going.”

More on Oliveira, the ground game and other subplots to the Blue Bombers eighth straight win to open 2022 in this week’s UPON FURTHER REVIEW…

OLIVEIRA CRUISED TO 66 YARDS IN THE FIRST HALF ALONE… on Saturday, which had already eclipsed his season high 62 yards a week earlier in Edmonton.

But in that effort against the Elks one of his 13 carries included a run-ending wallop on Edmonton defender Ed Gainey that reminded everyone – Oliveira included – of his power. That momentum, clearly, carried into Saturday night.

Just for the record, then, Oliveira has rushed 28 times for 172 yards in the last two weeks, for a healthy 6.1-yard average.

“Brady ran hard,” said receiver Nic Demski, who was sensational in his return after a month away with seven catches for 69 yards and two touchdowns. “I knew what he could do. You saw a little glimpse of it last year, saw some glimpses of it this year. I thought last week he had a really good game and then this week he left it all on the field. I can’t say enough about him. I know how hard he works.”

GRINDING OUT YARDS ALONG THE GROUND… also indirectly impacts the passing game. Winnipeg managed a season-high 430 yards net offence against the Stamps, including 270 yards and four TDs by Collaros.

“I think from a philosophical level and just a scheme level could speak more to it,” said Collaros of the importance of establishing the run game early. “Philosophically, any time you can impose your will it kind of gets them going a little bit and from a schematic and execution standpoint I know when you’re able to run the football well it makes it a little bit easier in the passing game.”

Consider this, too: the Stamps took a 28-25 lead with 7:43 remaining, but in Winnipeg’s last two drives – capped by a TD strike to Schoen and Marc Legghio 40-yard field goal – Winnipeg’s offence converted four of five second-down opportunities as Collaros went 4-for-5 for 65 yards.

“That’s Zach Collaros for you,” said Demski. “He was MOP last year for a reason. He’s making a great case for himself this year as well. That’s my quarterback. I love him. I love going out there to war with him and when he looks you in the eye and you know it’s your time, that just means the world. I love him leading this team and he does a great job of doing it.”

Not to be lost in the work of Collaros, Oliveira, Schoen and Demski were critical plays by Drew Wolitarsky, who had three catches for 46 yards, including two on second down, and Rasheed Bailey, who had 55 yards on five catches.

“Even Janarion (Grant) had a big catch and an end-around there on a big run as well,” said Collaros. “Don’t forget Dakota Prukop stepping in there in second-down situations and coming in cold off the bench not afraid of anything. He’s a beast.”

All this coming with Greg Ellingson and Carlton Agudosi, along with centre Michael Couture, all on the mend.

“We were just talking about that, the receivers,” said Demski. “It was a complete win. Everybody was touching the ball today; we had a lot of touchdowns today. It feels good. We’ve got guys at home, guys that didn’t get the ball as much today, but it just goes to show how many and weapons we have on this offence.” 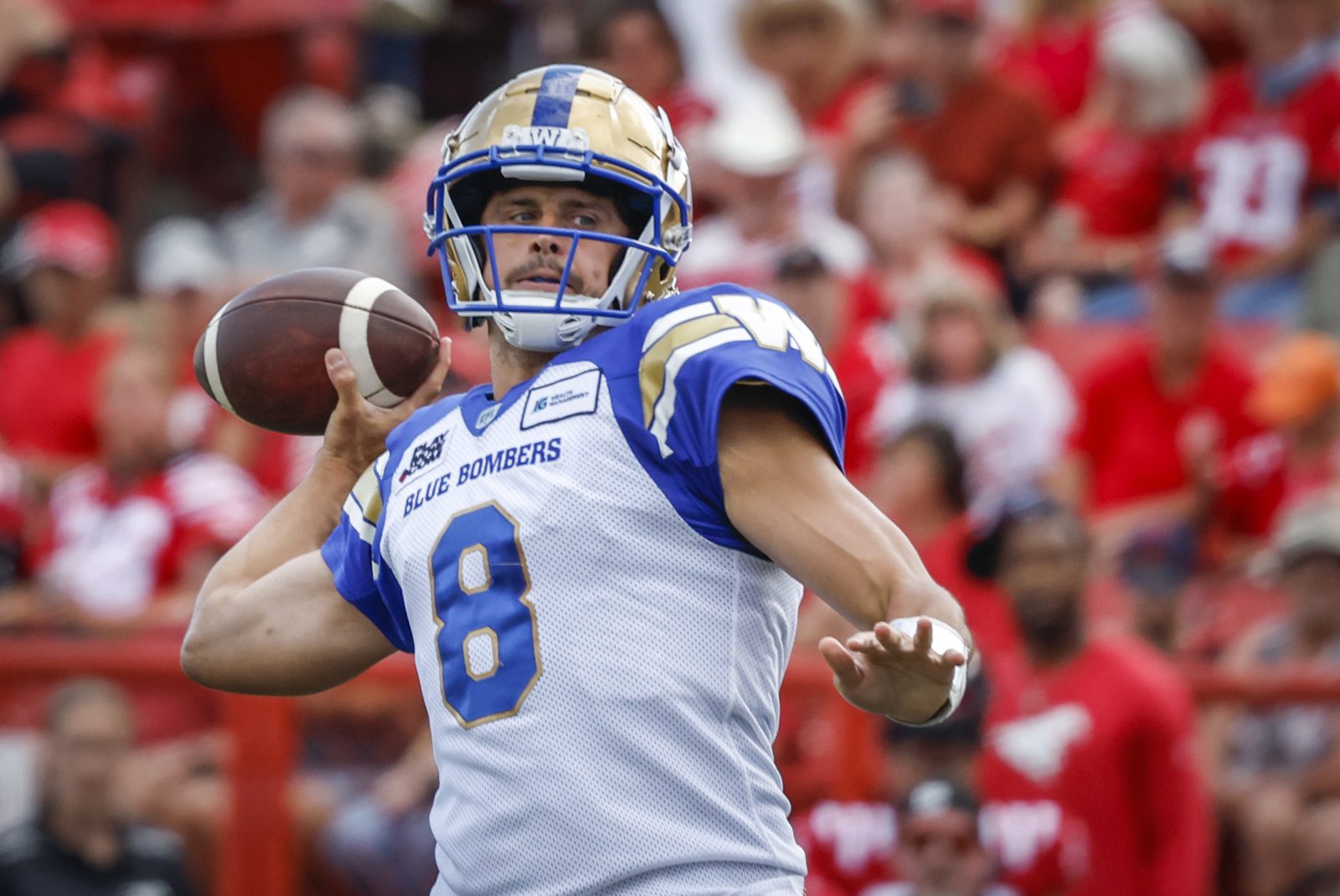 AS MUCH AS THE STAMPS OFFENCE SEEMED TO GRIND… out yards against the Blue Bombers, the defence did stiffen when it mattered – especially in the first half. And for all their time of possession – Calgary had the ball for 31 minutes and 20 seconds to Winnipeg’s 28:40 –the Stamps passed for just 219 yards.

Over two games against Mitchell and his talented group of receivers, the Winnipeg defence surrendered just 406 yards and one TD through the air.

FINALLY, MUCH HAS BEEN MADE ALREADY OF MITCHELL’S… post-game comments. Here they are:

“They’re a better football team than we are, that’s what I would say, at this moment,” said Mitchell told Calgary reporters. “I don’t think they will be at the end of the season, hopefully that’s where we’re climbing to but if you lose to a team two times in a row, they’re better than you. That’s just a fact.

“I hope we take it to heart. Go watch some film but use it to your advantage, they’re one of the better coached football teams, so obviously anything they’re doing against you they’re picking up on film, so they’re showing you what your deficiencies are. That’s offence, defence and special teams.

“You don’t win the Grey Cup right now, you can crown them right now if y’all want to, but they’re not going to be the Grey Cup champions today,” Mitchell said. “There’s a lot to learn. Like I said, if they’re that well coached, they’re going to show you what you’re not good at and I think that’s every single phase. We have an opportunity, myself as well, to find out what one of the better defences is doing against me.”

From this perch, that’s exactly what I’d want to hear from my quarterback after losing two brawls in – for the Stamps – successive weeks. The Blue Bombers, who have already captured the season series in case of a tiebreaker, will host the Stamps again on August 25th and possibly – some would say likely – again later this season.