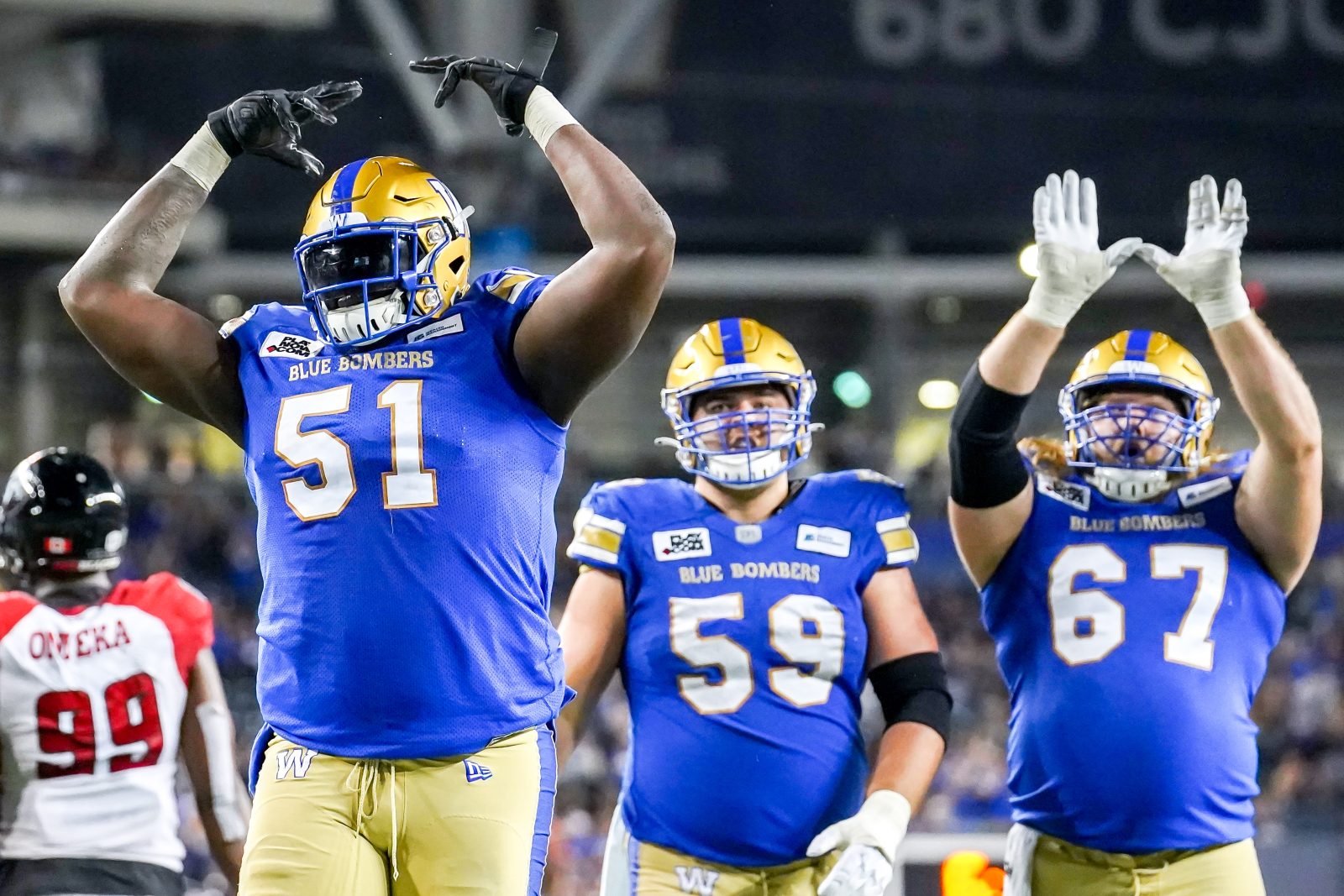 It’s right there in his job description as an offensive lineman: Be physical and push people around on run plays and play the protector when the quarterback drops back to pass.

Naturally, then, it helps if a guy can bring healthy doses of nasty and ornery to his game. Game in, game out. Day in, day out.

And so, a question: why is it that aside from the three hours on game day – and during the one-on-one sessions at practice – does Jermarcus Hardrick, the Winnipeg Blue Bombers all-star right tackle, have this perma-grin seemingly etched on his mug?

“When I was a kid I used to stare out my window all the time. I thought the whole world was just like North Mississippi, just like what I saw out that window,” began Hardrick in a long chat with bluebombers.com on Wednesday. “We had nothing to do. We had no wi-fi, no computer… I mean, I thought I was lucky when we went to my grandma’s house. and we got to spin those old phones. That was my upbringing. And that’s part of why I appreciate everything. Every day is a holiday. Every meal is a banquet. I live by that.”

Friday night in Ottawa Hardrick will pull on his #51 jersey, snap up the chinstrap of his gold helmet and then gird himself for a few hours of combat at the line of scrimmage. 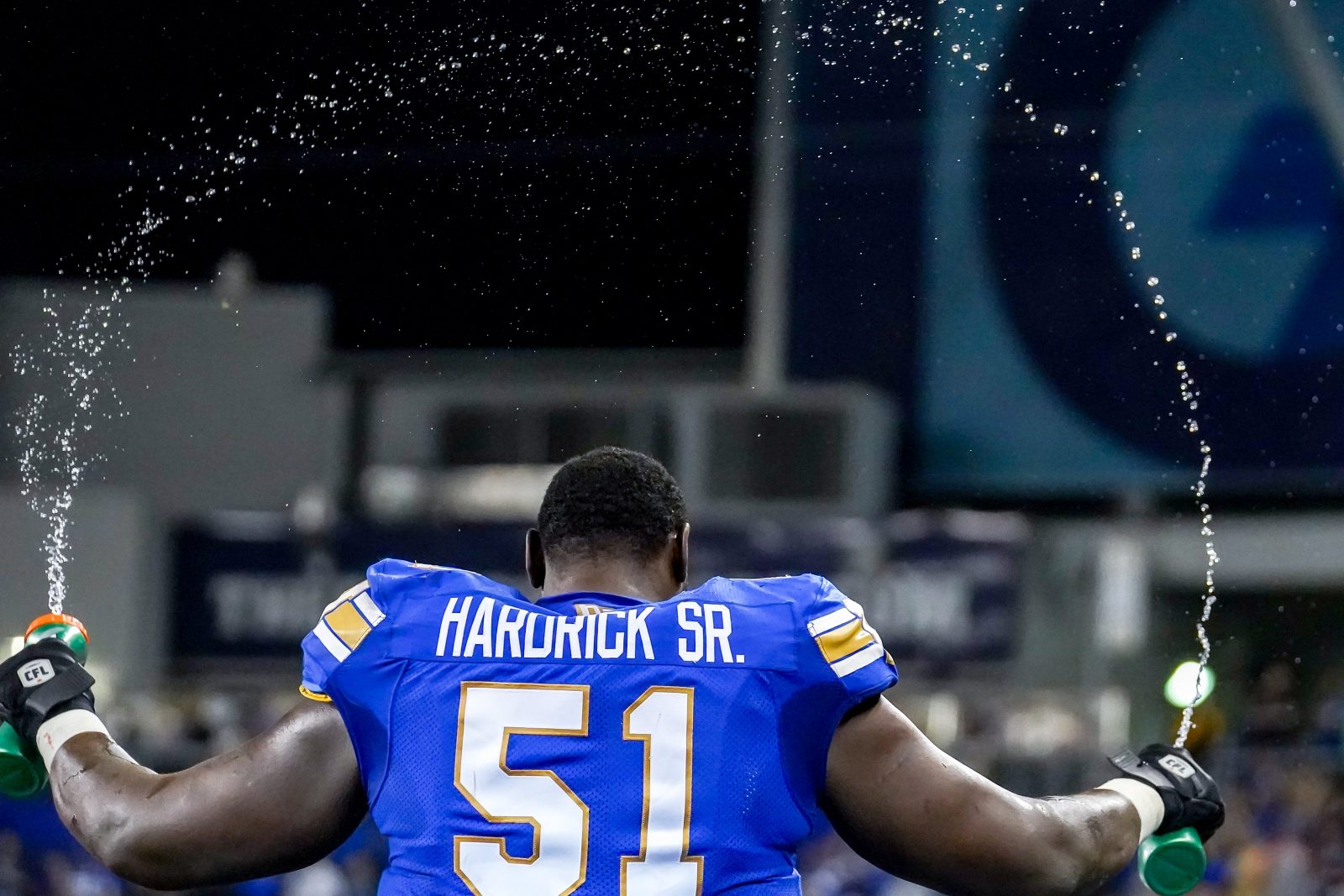 It’s a routine he has done so many times it has become almost robotic for the Mississippi product. But Friday is different. Friday is special because it will be the 100th regular season game in his nine-year Canadian Football League career that began with 12 games as a member of the B.C. Lions in 2014 and then took him to the Saskatchewan Roughriders for eight games in 2015 before he found his game, and a home, with the Blue Bombers in 2016.

“One hundred games… My wife and I have talked about it,” he said. “Last week we sat down and almost got emotional about it. My first year in the league was 2014 and we just talked about my first game with the Lions. We had one kid at the time and Junior was crawling all over the floor at one year old.

It could be said that no one in the CFL appreciates more the sense of team and of belonging than Hardrick. It comes, in part, from his upbringing in Mississippi. But that appreciation also comes from bouncing all over pro football’s map before his arrival in Winnipeg – and the emotions that come from all that rejection. 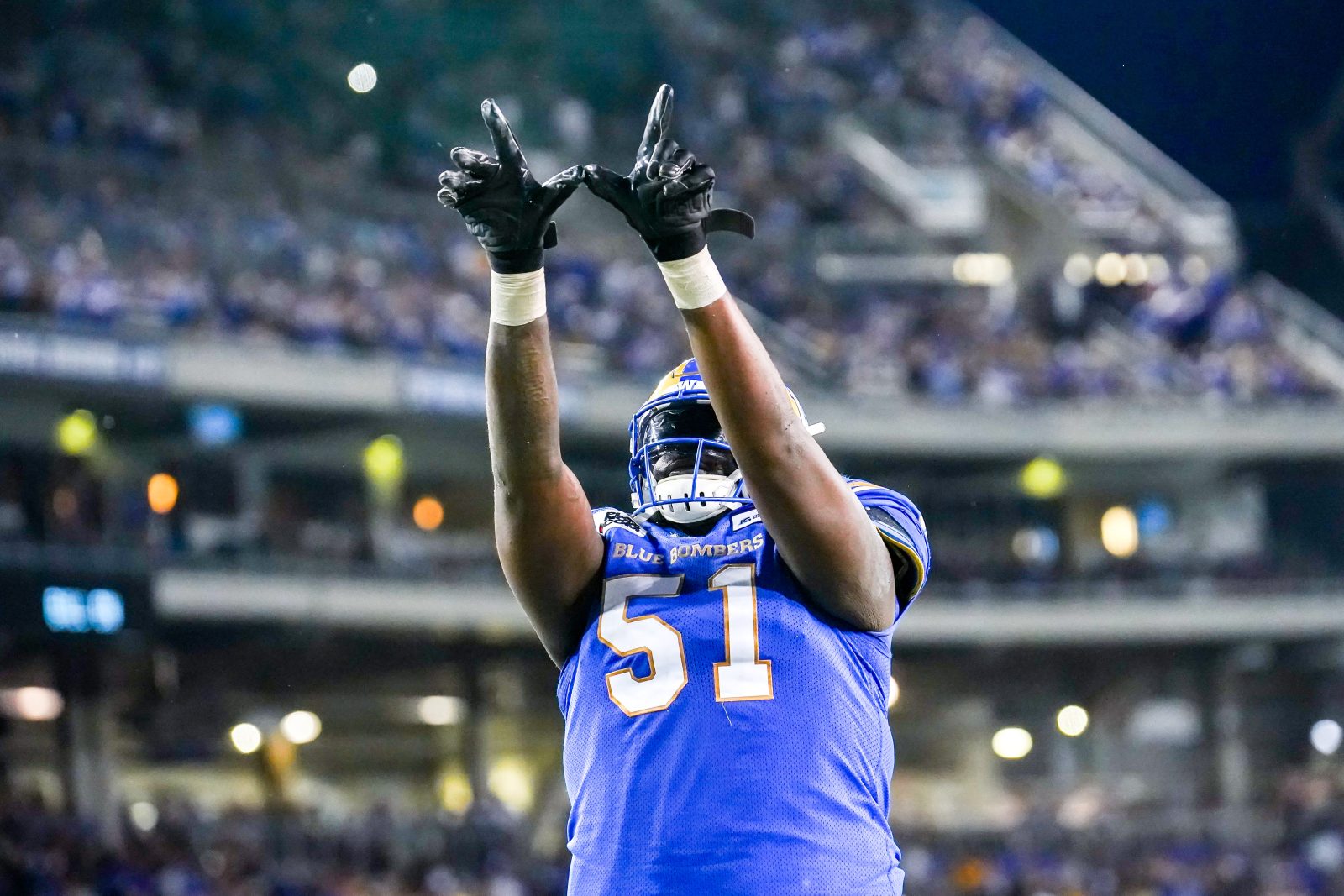 “Here’s a story from this offseason – the club put out a (press release) that they had signed two offensive tackles. I was just shaking when I saw that. I texted Matt (Gulakow, the Blue Bombers Director of Football Operations) and told him, ‘It’s on.’ It was supposed to be my off day, but I went and worked out because of that fear that I was going to be replaced, the fear that my family and I wouldn’t be coming back to Winnipeg.

“I love competition, but that fear can be a motivator. You can’t take any of this for granted. My biggest thing is I wake up every day wanting to make sure my kids can go to school where I’m at. If I get cut, then my kids can’t go to school in Winnipeg.

“I remember bad days, man, and so this is wonderful to me. Just to see my kids walking around… I didn’t have a dad and that’s my biggest motivation, being there for my kids. I wanted to have a dad who threw the ball with me. I want to be there when Junior gets home and wants to talk about football, when he wants to talk about life. I get emotional when I think about that, those are things I dreamed about.”

Hardrick’s first CFL game saw him dress as the Lions’ extra offensive lineman, taking the field in the ‘jumbo’ short-yardage package. He was admittedly lost then, and now one of the proudest flag wavers for the CFL game, both here in Winnipeg and in the offseason at his home base in Lincoln, Neb.

“I’ve said this before, but Winnipeg saved my life; changed my life. When I got here they said they liked me but wanted me to lose weight. I was about 350 and they had a weight clause in my contract – I had to get to under 320 pounds in five months. Once I did that I felt like I had taken backpacks off my knees.

“It’s more than that, though. I’ve made friends here that will last forever. I’ve been on a lot of teams, but it’s different here. When I got here it was all about me, all about just making the team. And then Osh taught me about team and loving the man beside you.”

Every day is a holiday. Every meal is a banquet.

JERMARCUS HARDRICK, AN INSIDE LOOK

The toughest defensive lineman he has faced in his first 99 CFL games:

“It has to be Jamal Westerman, when he was here (with Winnipeg). He was the first guy who kept me up all week. And then when we played him he kept me up for another week after that.”

Best offensive lineman he has seen:

“Stanley Bryant. It’s not even close. He’s a future hall of famer.”

“Pat Neufeld. People won’t know this because they’re not in the OL room. He’s got a dry sense of humour.”

“Sask. It’s the environment. You know when you get there it’s going to be a big game. Whether it’s Labour Day or the Banjo Bowl, it’s big.”

“Kevin Gates. It’s not even about the message, it’s more about the vibe and the big beats. When I hear that, it’s go time.

Actor he would like to have play him in a movie about his life:

“Denzel (Washington). I’m not going to sell myself short. Denzel is going to play me. It’s going to be a ‘Training Day’ vibe.”