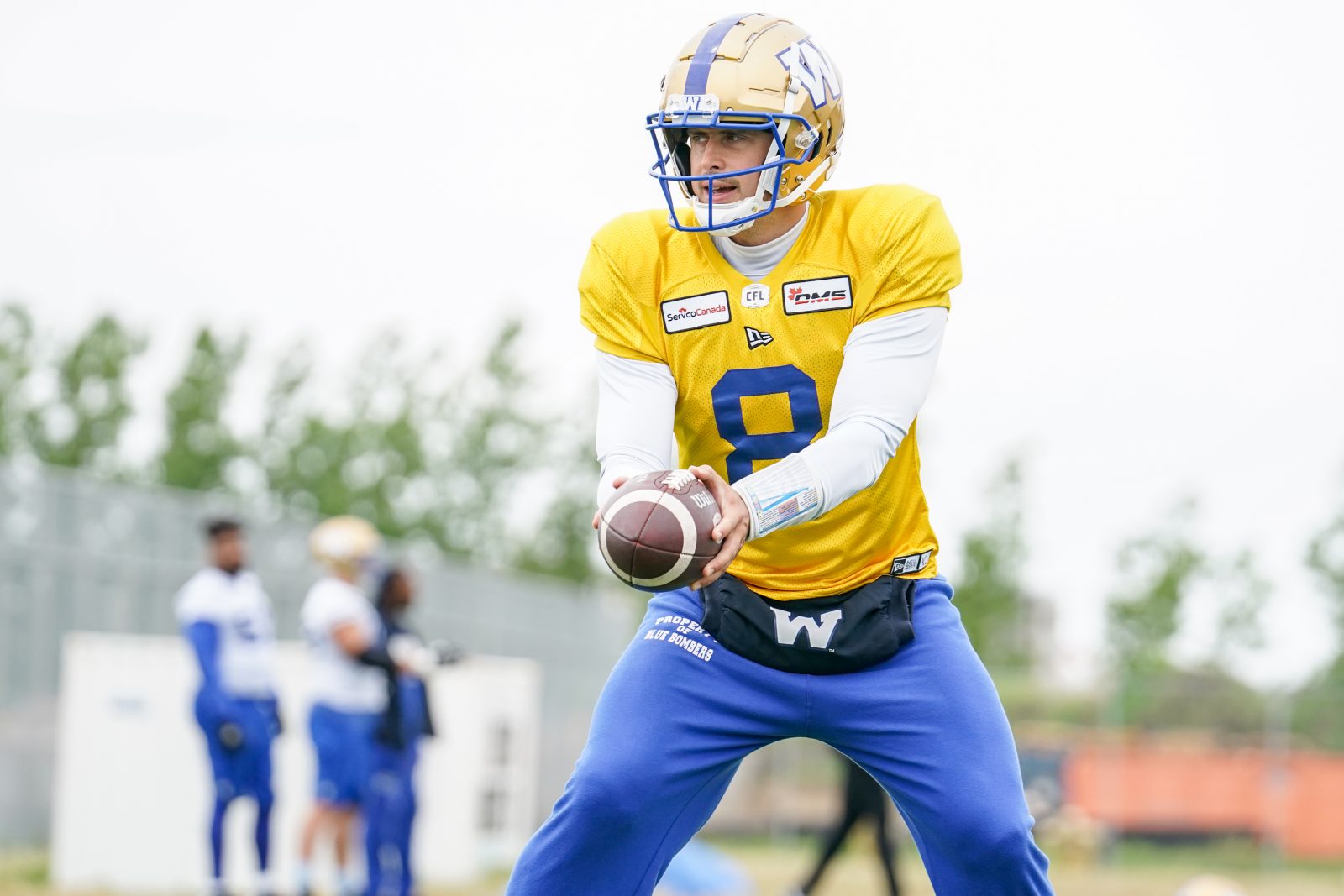 There was a time not that long ago when any Winnipeg Blue Bombers victory – a blowout, a close call or as the beneficiary of some sort of act of God – would have had the club’s diehards cartwheeling to Portage and Main in celebration.

Things have changed over the last few seasons, featuring five straight playoff appearances and back-to-back Grey Cup championships. The standards have changed, too, so much so that even after last Friday’s 19-17 win over the Ottawa RedBlacks, the club has spent the last few days watching film and, as head coach Mike O’Shea referenced after the game, having some ‘hard conversations.’

“We certainly didn’t play up to our standard,” began O’Shea following practice Monday, a session that was held both inside the WSF South and outside on the field adjacent to it due to weather conditions. “Now there were some good drives, there were some points scored, there was excellent operation at the end of the game and great execution.

“We stayed out of penalty trouble, we took the ball away a couple times, so there are certain things that we look at that can help you win those games but certainly we didn’t come close to playing to our standard… To come away with two points and have a lot to fix is good.”

The Blue Bombers, now 1-0, head to Ottawa for Friday’s rematch with the RedBlacks at TD Place. The RedBlacks generated more offence than the Blue Bombers (431-289 in net yards), but Winnipeg also had fewer penalties and won the turnover ratio at +2. 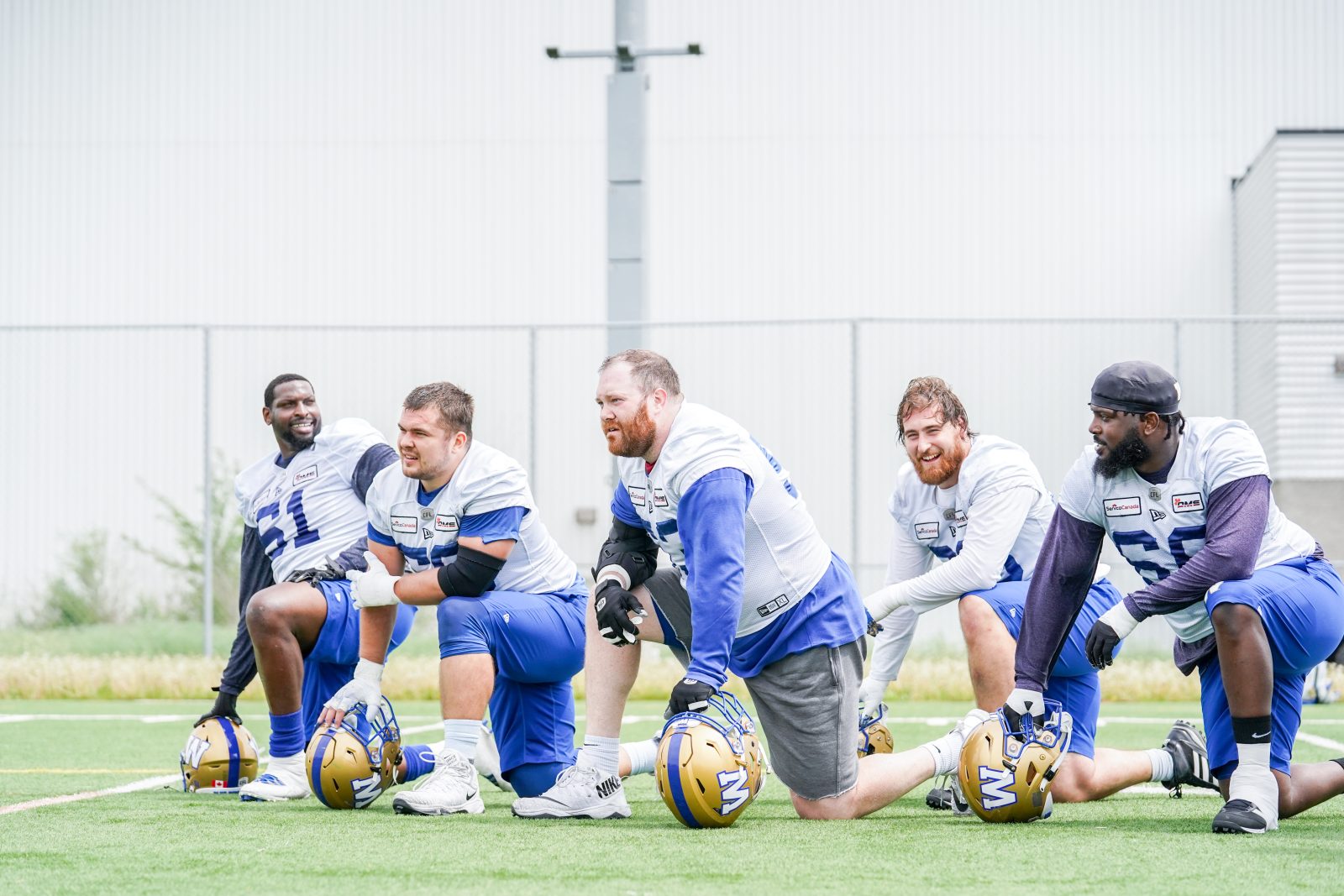 “The standard has changed around here and that’s ultimately a good thing,” said veteran guard Pat Neufeld. “We’re not happy with just winning the game now. We have things that we expect to do on the field and hold ourselves to a certain way that we play. That’s the sign of a good football team and we’re going to try and keep building.”

“You believe with this group that they’re going to respond to the film they watched and they’re going to want to put in a better outing,” added O’Shea. “I’m not saying the effort wasn’t there – certainly they were working hard enough, but they didn’t get to the level they’re accustomed to.

“Generally, with these guys they’re able to pick it up and they didn’t have a lot of fun watching that film, either.” 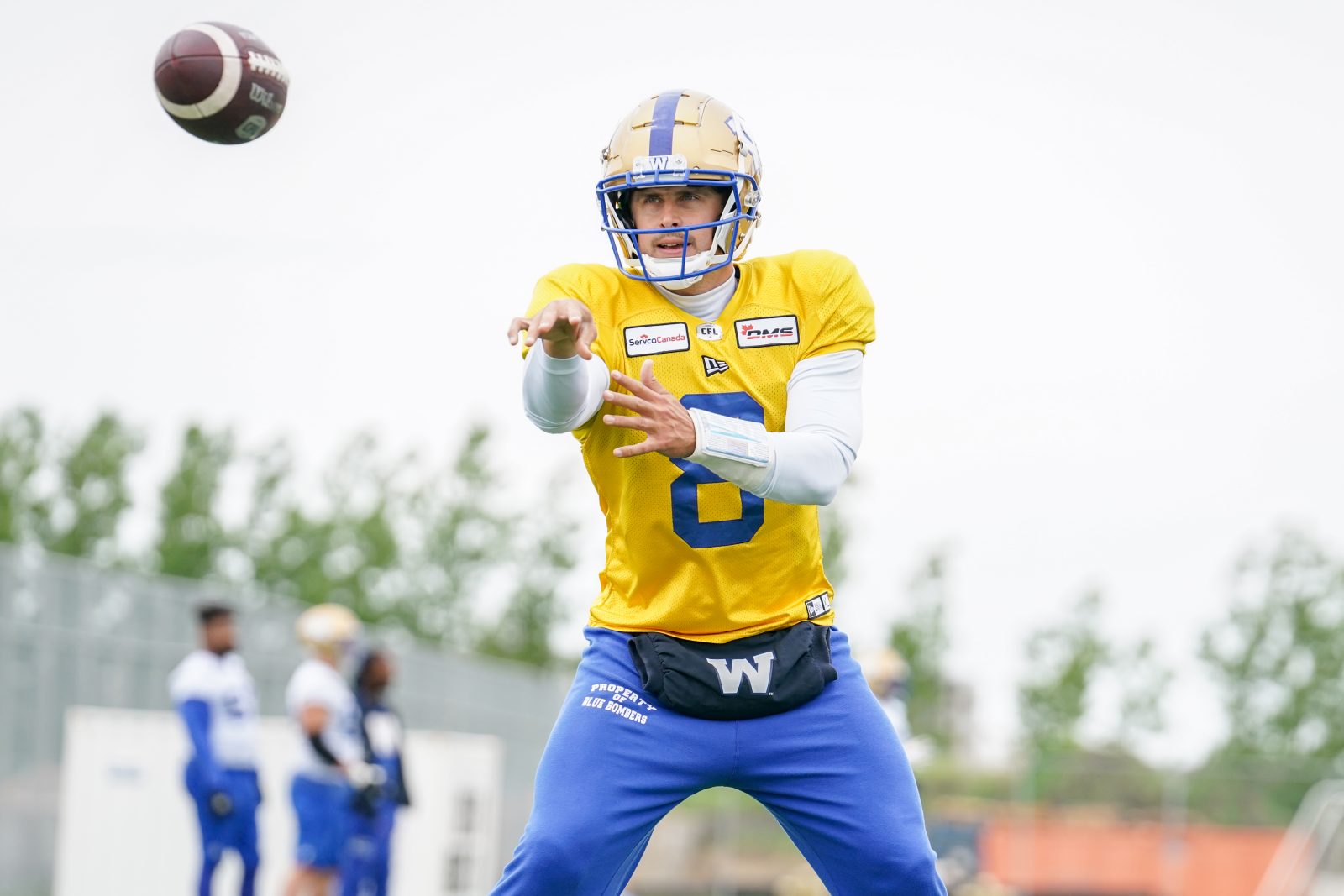 Zach Collaros practised fully on Tuesday, as did Dru Brown, but while Dakota Prukop was in attendance he did not participate and later in the day was added to the six-game injured list. Prukop runs the club’s short-yardage package – scoring a TD in Friday’s win – and also serves as the holder on placekicks, so the club will need to make adjustments there. The club did add QB Joe Mancuso to the roster from the suspended list on Tuesday, while receivers Greg Ellingson and Dalton Schoen are available as holders.

It was Brown who came off the bench to complete three straight passes leading up to Marc Liegghio’s game-winning field goal after Collaros was taken from the game after a 10-yard run that ended with him taking a shot to the head.

“I got hit, the spotter from Toronto pulled me out of the game,” Collaros said Monday. “I guess they look for if you grab your helmet… I touch my helmet often, so that’s not a great indicator. They took me off, evaluated me, the three plays were up and by then we were already down the field so I kind of just waved Dru to stay on and we were good.”

Collaros referred to the collision as ‘just a football hit’ but wasn’t pleased to be yanked – particularly at such a critical moment.

“I wasn’t very happy about it, obviously,” he said. “But they made the call from Toronto. Al (Couture, Head Athletic Therapist/Director of Health and Performance) came over and told me… it is what it is.” 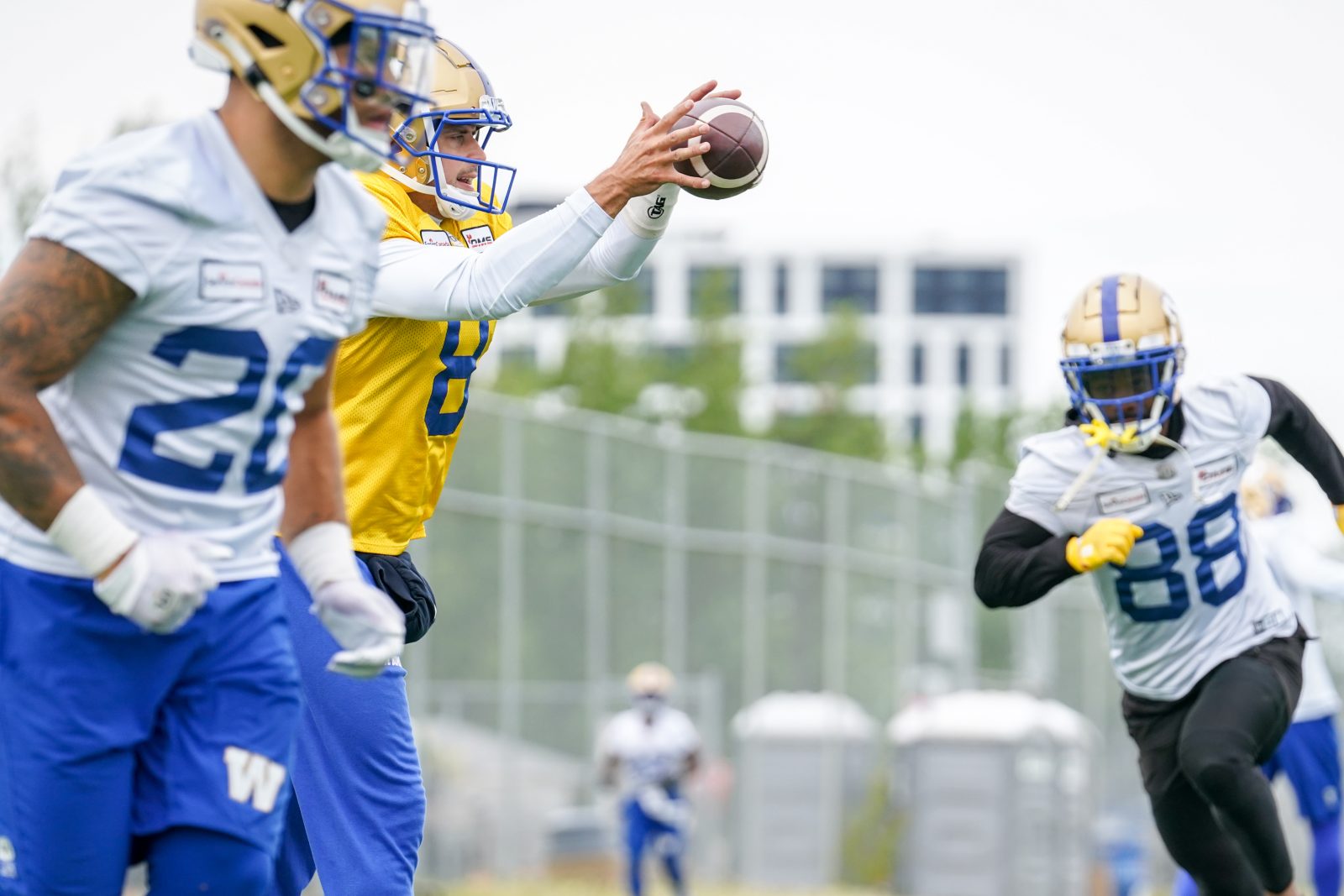 Collaros was asked Monday to give a grade of the offence’s performance against Ottawa.

“The grading system is different here in Canada, so I don’t know what the percentage is, and the letter grades would be,” he said with a grin. “I don’t think it was good enough, obviously. We all felt that way. We’ve addressed it, we have our goals for the week and came out here and had a pretty good practice.

“… There’s always little things to work on. If you’re sweeping things under the rug, especially after wins, you’re not going to get any better. There’s a lot to address this early in the year. It starts with me playing better, getting the ball out of my hands on time, knowing where the football is supposed to go – all those little things – knowing if I’m protected or I’m not protected that should make us able to stay ahead of the chains and be able to run more plays and be more effective.” 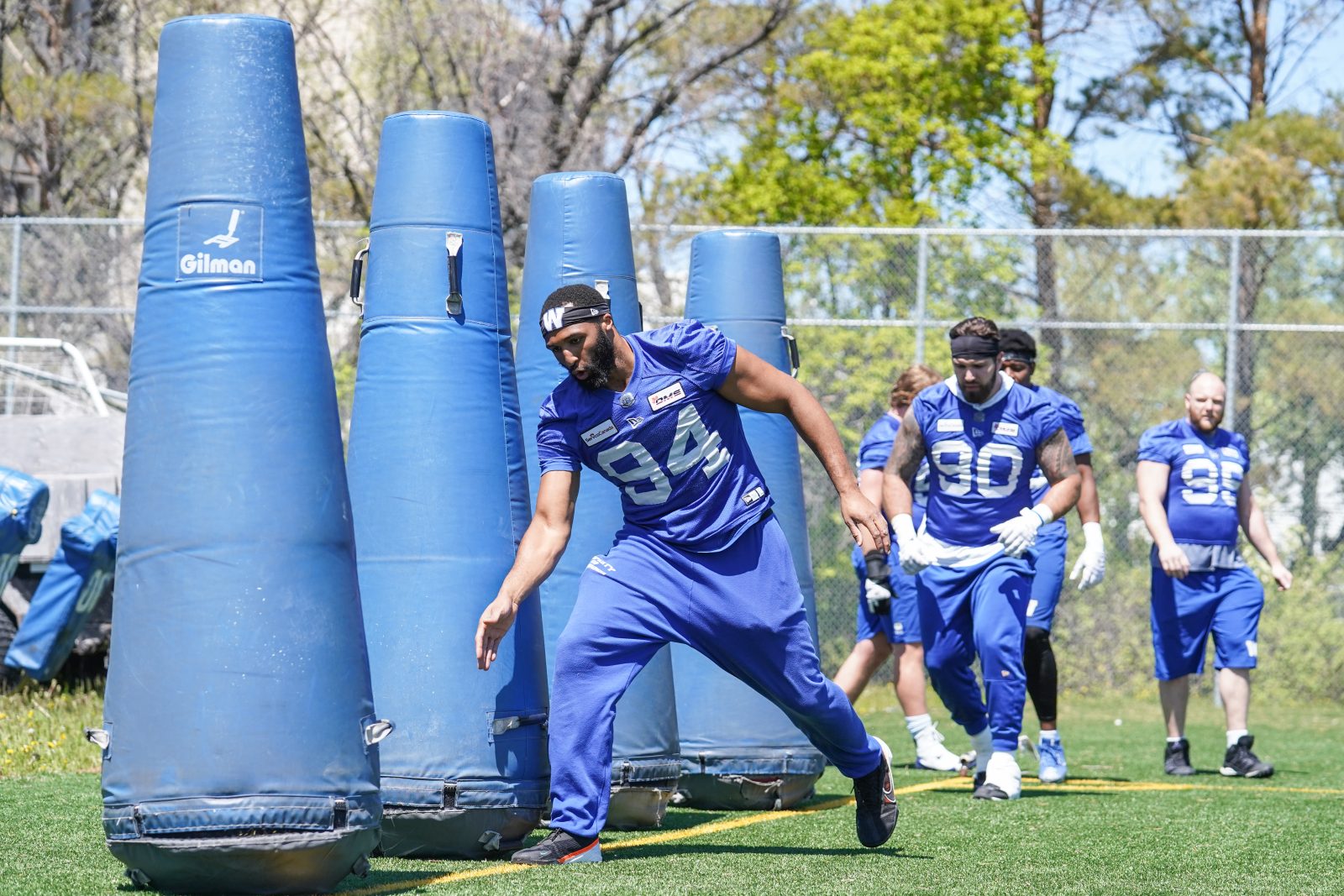 Blue Bombers defensive end Jackson Jeffcoat practised in full Tuesday after missing the opener due to an ankle injury.

“If they let me go, I’m ready,” said Jeffcoat. “I’m excited. It’s always frustrating to miss any games at all. So, I’m just amped up and hoping to get the opportunity to go.

“It’s always hard to watch. I’ve had my share of injuries during my career overall – college, pros – and it’s never fun. The biggest thing is you’ve got to find a way to help your teammates get better and be positive and not drag anybody down even though you might not be feeling the best about it.

“I just missed playing the game in general. I love this sport and coming up here and playing in Winnipeg really showed me how much I love it.”

Jeffcoat said he tried to offer help during Friday’s win by being an extra set of eyes, particularly to rookies L.B. Mack III and Cedric Wilcots II – the duo who took turns lining up in his spot. But when it was suggested getting after quarterbacks was his ‘top priority’ Jeffcoat added.

“Oh yeah. I feel that’s what Jeffcoats do. I learned it from my father.” 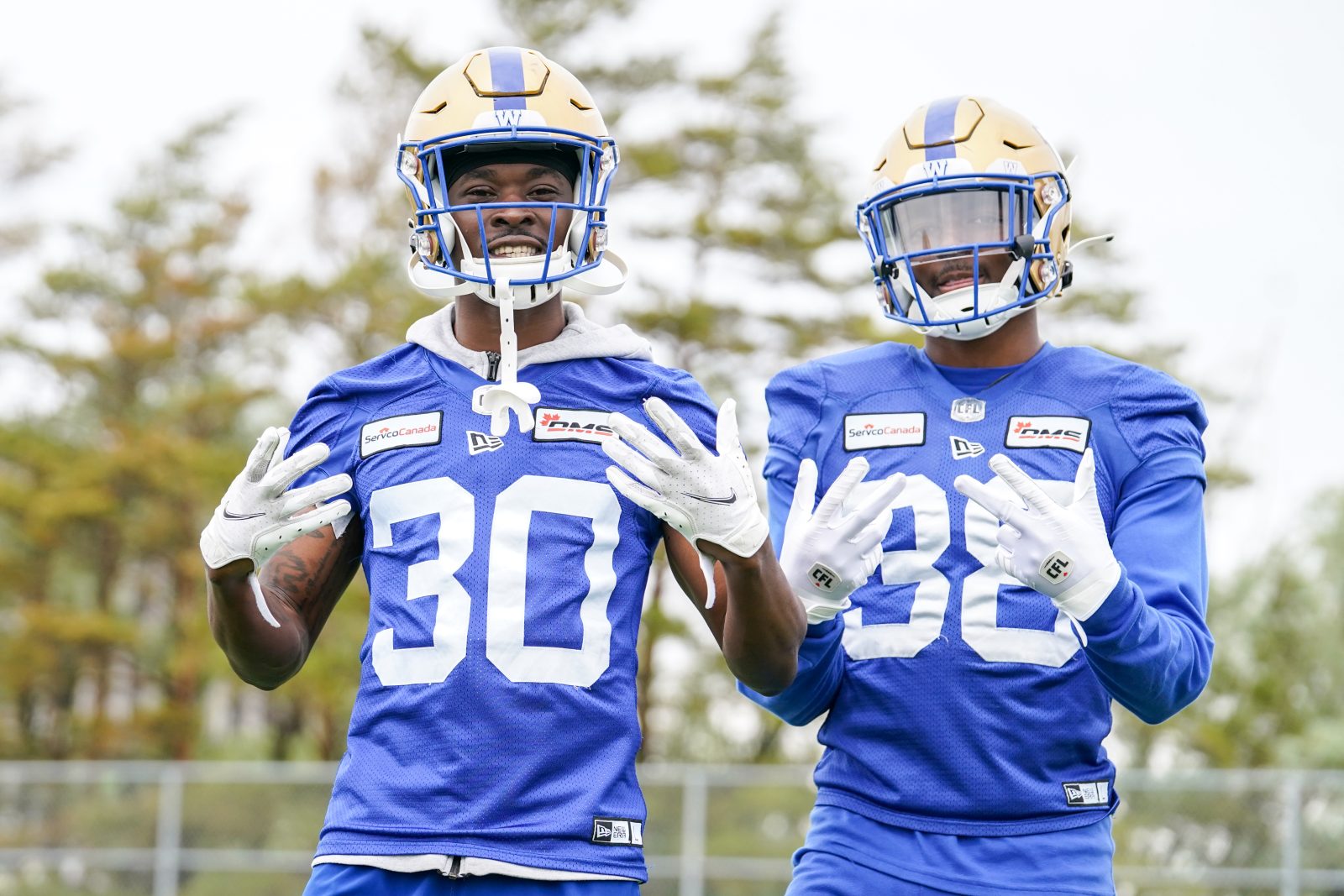 O’Shea was asked about the struggles of cornerback Winston Rose in Friday’s win and, not surprisingly, was quick to defend the veteran defensive back.

“He’s been a top-notch corner for a number of years,” said O’Shea. “He’s led the league in interceptions a couple of years. Something was a little off… everybody’s got all the confidence in the world in him.

“I don’t think it’s any one thing and I also think you’re discounting the idea that it’s 12-man football so sometimes what you see might not always be… there might be someone else affecting the play, too. I expect Winston expects to have a better outing. We’ll never judge a guy on one game, that’s for sure.”