“I couldn’t ask for a better experience to start off my career.” 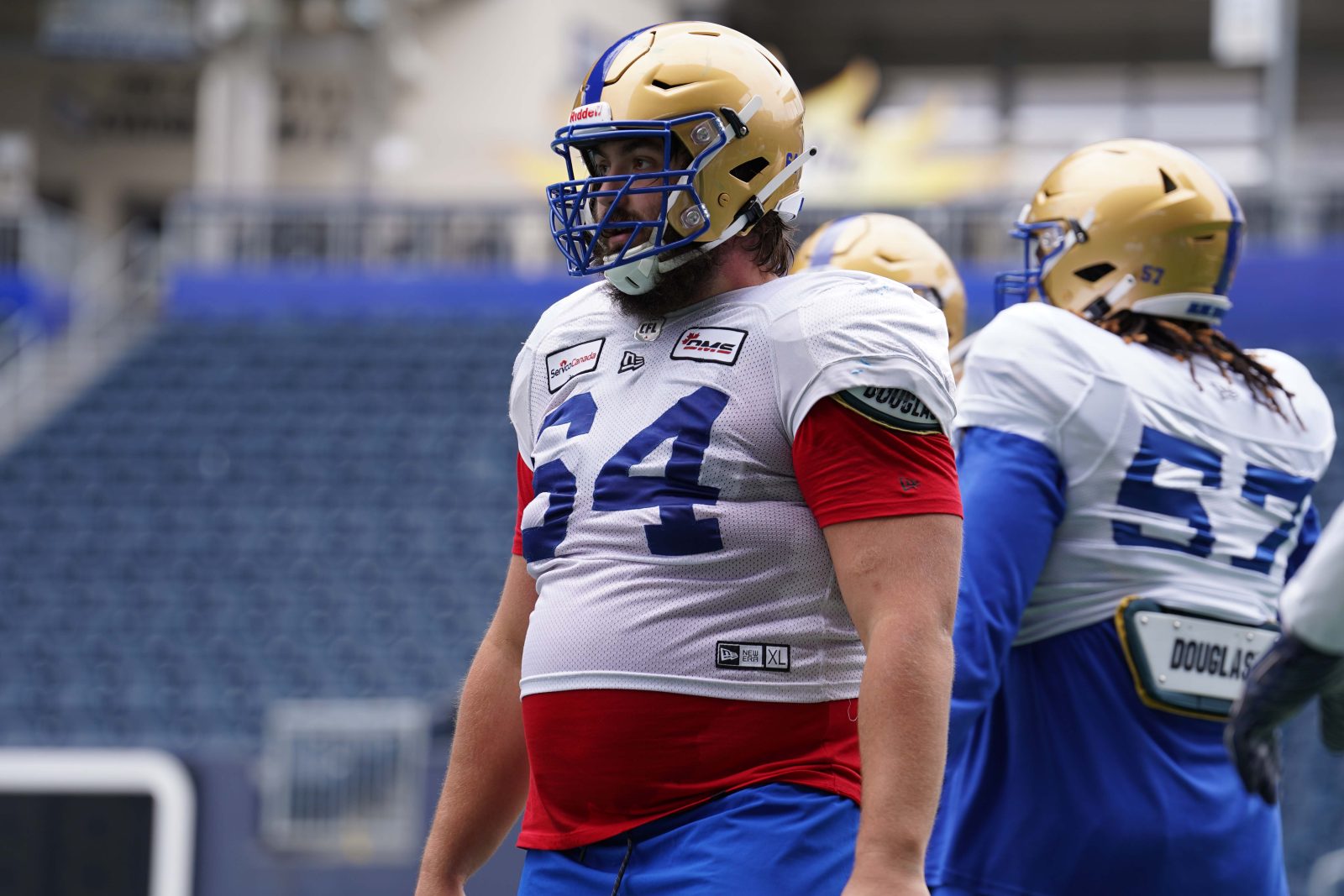 “I couldn’t ask for a better experience to start off my career.”

He also possesses an infectious exuberance and love of the game that should help him make a smooth transition into a Blue Bombers offensive line room that overflows with it.

“I’m very happy,” began Dobson, the Blue Bombers first pick in the 2021 CFL Draft following his first day on the field with the club. “I came in yesterday and got to meet the coaches, the players… get on the film. It was great.

“I love football. I love being around football. The yard off the ball threw me off a bit today when I came out, but it was a great experience learning from some guys in the offensive line room who are phenomenal players and have been phenomenal players for a long time in this league. Overall, I couldn’t ask for a better experience to start off my career.” 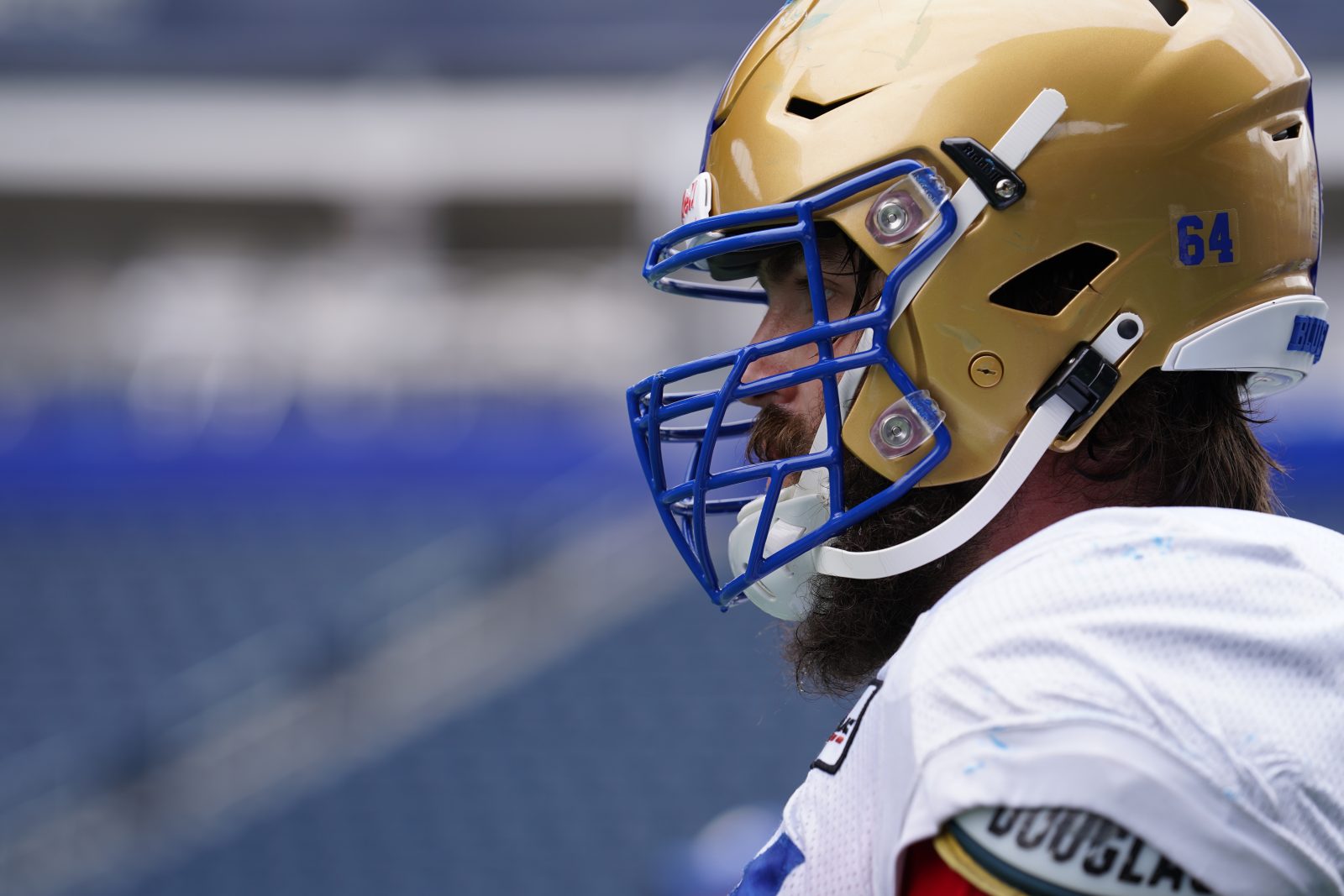 A product of Ottawa who began his college career at the University of Maine before transferring to Texas State, Dobson brings depth to a Blue Bombers line that lost Drew Desjarlais to the New England Patriots, but returns four starters in tackles Stanley Bryant and Jermarcus Hardrick, guard Pat Neufeld, centre Michael Coutue and also has a veteran like Geoff Gray ready for more work.

The Blue Bombers were enamoured with Dobson in selecting him third overall in last year’s draft, and that attitude didn’t lessen as he returned to school, then signed with the USFL, only to have that opportunity get spiked due to visa issues. Dobson was in the Chicago Bears mini camp last week before joining the Bombers on Friday.

Here’s what will also serve Dobson well – asked to describe himself as a player he said: “I like to think mean, athletic, nasty – a bunch of fun adjectives or descriptive words I could possibly think of. I like to play physical, nasty with being athletic at the same time.”

“We like our guys a certain way in that room, and they hold themselves to a certain standard,” added O’Shea. “I don’t know if the word ‘nasty’ doesn’t come to my mind, but they don’t take a lot of penalties and they play hard, physical football. He’s quite capable of that.”

Dobson’s athleticism earned him a great deal of notoriety long before he put his name onto a contract with the Bombers this week. His Instagram page features a video of him tipping the scales at 344 pounds before throwing down a dunk and he twice earned a spot on Bruce Feldman’s ‘College Football Freaks List’.

He’s got a witty sense of humour and told us last year in an interview he has drawn inspiration from his younger sister Ainsley, who has Williams syndrome – a rare neurodevelopmental genetic disorder that features ‘mild learning or developmental challenges.’

Job #1 for Dobson is to continue to work to fit into the O-line room and get his nose into the playbook.

“I came in yesterday and we’re already joking around, talking,” he added. “It’s not like other teams where those guys are ‘The’ guys. The entire offensive line room is part of the team. They’re a unit. Everyone’s together. I just learned that last night, but prior to last night I knew they were a great group physically on the field, so I’m excited to be a part of it.”