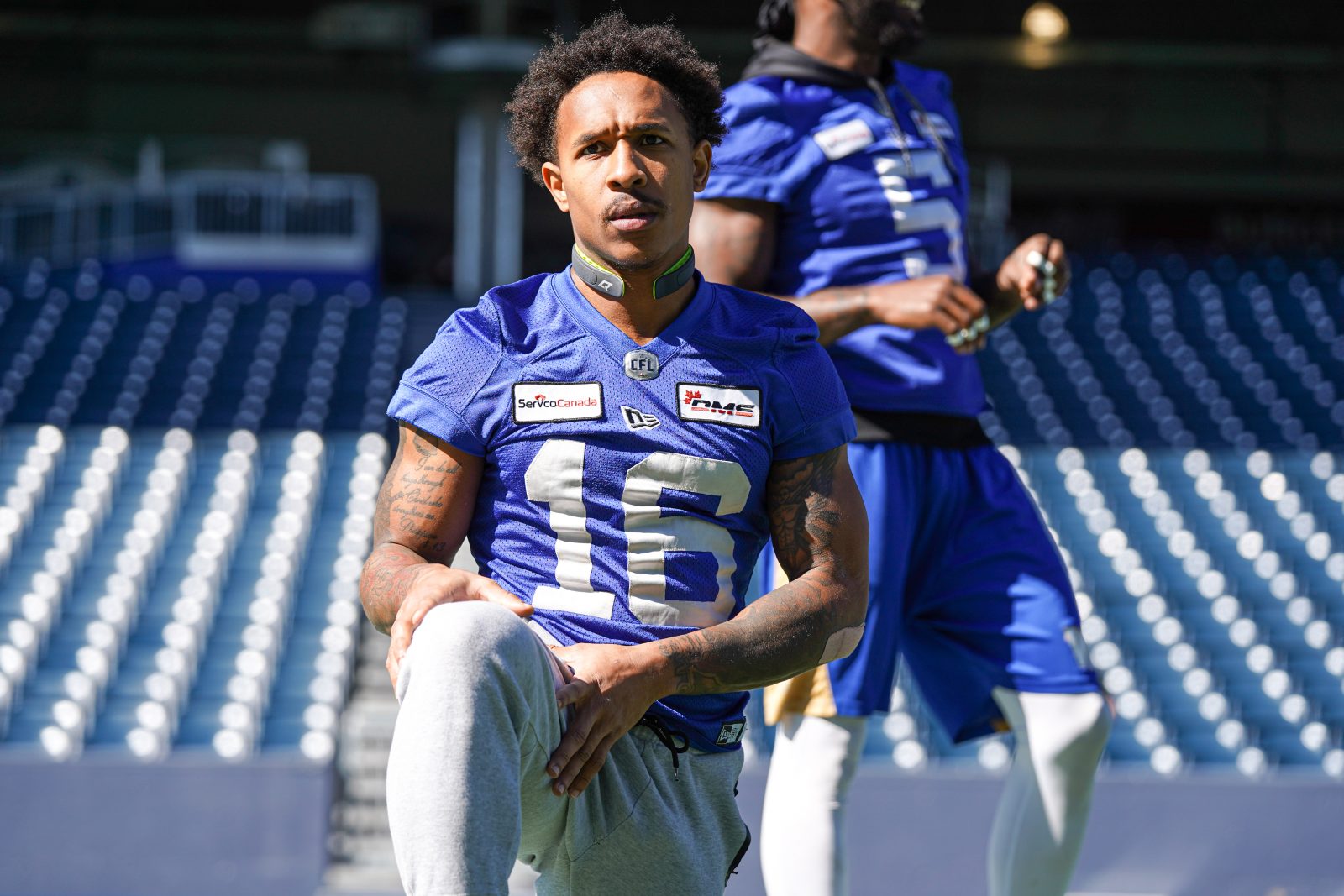 Quick Hits from Thursday: Day 3 of the Blue Bombers practice week leading up to Saturday’s home date with the B.C. Lions…

1. OPEN ARMS, FULL HEARTS: The Bombers will be welcoming a couple of CFL All-Stars to the fold when they return from the bye week in cornerback Winston Rose and kicker Sergio Castillo and the reactions of the two — both of whom are returning to Winnipeg — was genuine.

I woke up hella juice to get back to Winnipeg‼️ Can’t wait to see @Wpg_BlueBombers. My teammates, my coaches, the fans. Everybody in Winnipeg. One goal we all trying to achieve & that’s to win the Grey Cup so let’s do it. #ForTheW #FIFO

The Bombers have been unsettled at the placekicking position — Castillo would be the fourth to attempt a field goal this season after Tyler Crapigna, Marc Liegghio and Ali Mourtada — but where Rose fits into an already-stingy secondary will be an intriguing story to track in the weeks ahead.
“They’ve been excellent, they’ve been excellent,” said Bombers head coach Mike O’Shea of the secondary. “(Rose) is obviously a very good player. He led the league in interceptions when he was here, he did a lot of great things for us, he played very well on special teams in the punt-return game for us.
“It’s just another piece. Right now we don’t have to figure out where he goes, but he’s a good football player and everybody on the team should be happy about playing with good football players.”
The Bombers start rookie-of-the-year candidate DeAundre Alford at one cornerback spot along side Deatrick Nichols, with Mike Jones manning the other corner beside Nick Taylor, with Brandon Alexander at safety, Alden Darby at the Dime spot and Demerio Houston able to fill in at a number of spots.
But adding Rose isn’t just about his skillset on the field, there’s also his veteran savvy.
“He’s a different type of dude,” said Jones of Rose. “He has some energy to him, he’s one that’s going to bring the energy to practice every day. He’s going to bring that whole vet mentality to the playbook, along with just being there and being a smart player. He has that vet years in his game where he knows a lot of stuff and so just dropping those gems on the guys in the secondary now will definitely be helpful.”

2. MORE BACKFIELD DEPTH: A potentially sneaky-good addition flew under the radar with the Rose signing on Wednesday with the Bombers addition of RB Shaq Cooper, who played five games with the Lions this year before being recently released. He also appeared in seven games over 2018-19 in Edmonton.
“When he was with Edmonton, boy, I thought he was electric,” said O’Shea. “He was fast, I thought he was very dynamic. Fortunately for us, we’ve got a bit of a need right now and he became available. So it certainly made sense to add that piece. Once again, we certainly want to have the bodies in house and ready to go should we need them.
“Once we get him in here and get to know him a little bit better we’ll figure out what we can do with him and how to best use him for his success, too, as well as the team’s. What you see on film you really like and when you get a guy in-house and start to really understand who they are then we’ll make those decisions as we go forward.”
Asked about the Bombers ratio flexibility and the possibility of starting an American at RB, O’Shea added:
“With Andrew (Harris)… I think you’ve heard me say now with the depth with Brady (Oliveira) and Johnny (Augustine), we feel very comfortable those guys are starters in our league. So, right now Shaq Cooper comes in as a good depth piece that we needed right away and once again, once he gets in the building we’ll figure out how to best use him. Brady and Johnny are excellent tailbacks that have proven they can carry the load in this league and protect and do all the things that we ask the tailbacks in our system to do.”

3. CENTURY CLUB: Bombers long-snapper Mike Benson, a Winnipegger, will suit up for his 100th career CFL game on Saturday. And that achievement isn’t lost on him.
“Being able to play in my hometown, especially for game 100, and to have my newborn son watch the game, even though he’s six months old but he totally grasps what’s going on… to be able to do game 100 in front of my son, my fiancee, my family, it’s going to be very special. I’m very excited and can’t wait to get on the field on Saturday.
“Any kid in Manitoba who plays football in Manitoba has that dream of being able to play for the Blue and Gold. Being able to get here after playing all the years in B.C., in Ottawa and Edmonton… being able to finally get home is really nice. The Mike Benson Canada-wide Tour has finally come to its last stop. I’m excited to play a few more years here, hopefully, and finish this season on top. It’s been a dream come true, honestly. You go back to Canad Inns Stadium with the metal seats and you’re banging on the top of the rafters and making all the noise and you’re like, What would it be like to be on the field?’ Now you’re finally here and atmosphere is just electric and to be able to play in front of your family and friends for every single home game is something I hope everybody gets to experience, but I’m truly grateful to be able to experience it now.”

4. CALMING PRESENCE: Here’s O’Shea on what Benson brings to the Bombers, beyond his ability to long snap:
“He’s a veteran guy who has a calming presence. He spends a lot of time with our guys, with our kickers. He’s seen it all. Besides that well, he blocks well for us in the protections and he gets downfield and he can make a play for us downfield. When you have young guys or new to the CFL players, a guy who has been there and done that is very important. He’s a great influence on these guys in terms of just being around them all day and making sure they’re doing the right things and making sure they’re remaining fairly calm. He’s seen it all.”

5. TESTING NUMBERS: The CFL issued a press release Thursday indicating that between Weeks 6 and 11 of the season approximately 14,200 COVID-19 tests were administered to Tier 1 personnel — players, coaches and support staff. Of those tests, four returned positive. Eight of the nine CFL teams have also reached the 85 per cent fully-vaccinated mark. Earlier this week Mike O’Shea indicated 99 per cent of the Bombers Tier 1 staff is partially vaccinated, with 98 percent fully vaccinated.