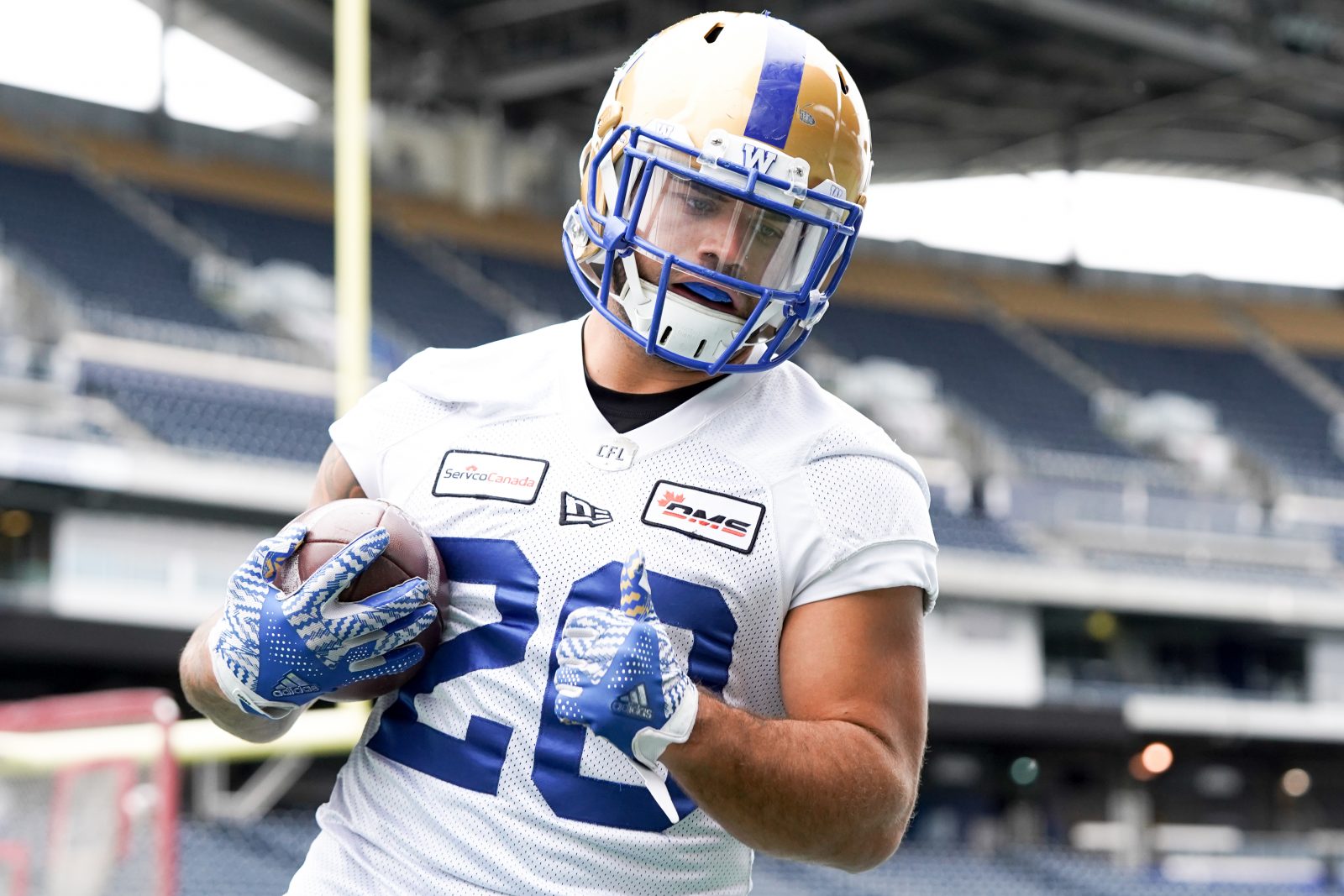 Quick Hits from Tuesday: Day 1 of the Blue Bombers practice week leading up to Saturday’s home date with the B.C. Lions…

1. WELCOME BACK, SERGIO/HELLO GABRIEL: The Bombers bolstered their kicking position by adding two kickers on Monday — 2019 CFL All-Star Sergio Castillo and Gabriel Ferraro, who went 7-for-9 in five games for the Saskatchewan Roughriders in 2019 while Brett Lauther was injured.
Ferraro was on the field Tuesday, while Castillo is expected to join the club during or after next week’s bye. That means Ali Mourtada will again handle the placekicking chores and Marc Liegghio the punting on Saturday.
More later on bluebombers.com on the kicking situation…

The club has also added 🇨🇦 Gabriel Ferraro (@gferraro_10) to the practice roster.

2. DON’T COMPLICATE THINGS: A win by the Bombers this Saturday against the B.C. Lions locks up first place in the West Division. It would be the first time Winnipeg has finished first in its division since 2011 and only the third time since 2001 (both 2001 and 2011) as members of the East Division.

Amazingly, clinching first and earning a bye in the first round of the playoffs isn’t something being discussed in the locker room.
“That’s my first time hearing that today, just now,” said Bombers safety Brandon Alexander on a post-practice media Zoom call. “I don’t pay attention to social media. We don’t talk about that in our building. We just take it one game at a time. And just like how we clinched (a spot) in the playoffs, I honestly didn’t know until we did it.
“Now that you told me, that’s all fine and dandy. We’ve still got to go out there and do what we do.”

3. READY, WILLING, ABLE: Bombers RB Andrew Harris did not practice on Tuesday — he was injured in last Friday’s win over Edmonton — and was again replaced in the backfield by Brady Oliveira.
Oliveira started the first three games of the season with Harris being nicked up in training camp and was sensational off the bench against the Elks, rushing 16 times for 105 yards. It’s uncertain whether Harris will be back in the lineup for Saturday.
“If (Oliveira starting) is what happens I’ll be ready,” said Oliveira. “Obviously with me being a natural competitor I want to start. I know my abilities. I want to go out there and help my team win football games. So whatever that looks like for me, whether that is starting on Saturday, whether that is getting some reps on offence, whether that is playing special teams… whatever it is I’m going to stay ready and help this team win football games.”
Oliveira said he stays sharp even while not playing in games by staying within earshot of No. 2 QB Sean McGuire.
“I’m by Sean McGuire every single play on the sidelines asking him what the play is… he probably gets annoyed at me because I’m always dragging with me on sidelines to make sure he echoes the call back to me,” said Oliveira. “That’s my way to stay in the game, locked in mentally and staying sharp and knowing what the play is even though I’m not on the field so that when I do get my chance I can go in there and I kinda know what’s going on.”

4. COLD? WHAT COLD?: Brandon Alexander was asked some questions about the cold today, seeing as the temperature dropped from a high of 21c on Monday to about 6c with a north wind on Wednesday.
“It doesn’t bother me at all any more.” he said. “If you see me for the past three years, I don’t care how cold it is or if it’s snowing or not, I don’t have any sleeves on. Once you get running out on that field it’s time to play ball.
“It’s not something big because we’ve already bought in with what we’ve got here. This is Winnipeg, another form of it: ‘Winter-peg.’ This is the place where it gets cold. People don’t want to come here and play once it gets cold like that. But, we’re here. We have to play here, we have to practice here. We don’t have a choice. So, when we came here we bought in already when it was sunny outside. There’s no reason for us to be like, ‘Ah, now it’s cold, da-da-da… ‘ It’s not cold enough.”
Asked if he had any advice for new Bombers, particularly those from warmer climates, Alexander thought for a moment and said:
“Suck it up. We’ve got no choice. We’ve got no choice but to go out there and play. We practice in it. We don’t cry about it. We know it’s going to get cold. It is what it is. I think the guys can definitely look at me… I’ve been up here for a couple of years. I’m a Floridian. It doesn’t get past 50 degrees Fahrenheit down there/what am I doing up here type deal?
“… Those guys, they’re good. They bought in since they got here. They’re ready to go.”