“It didn’t go the way I wanted” 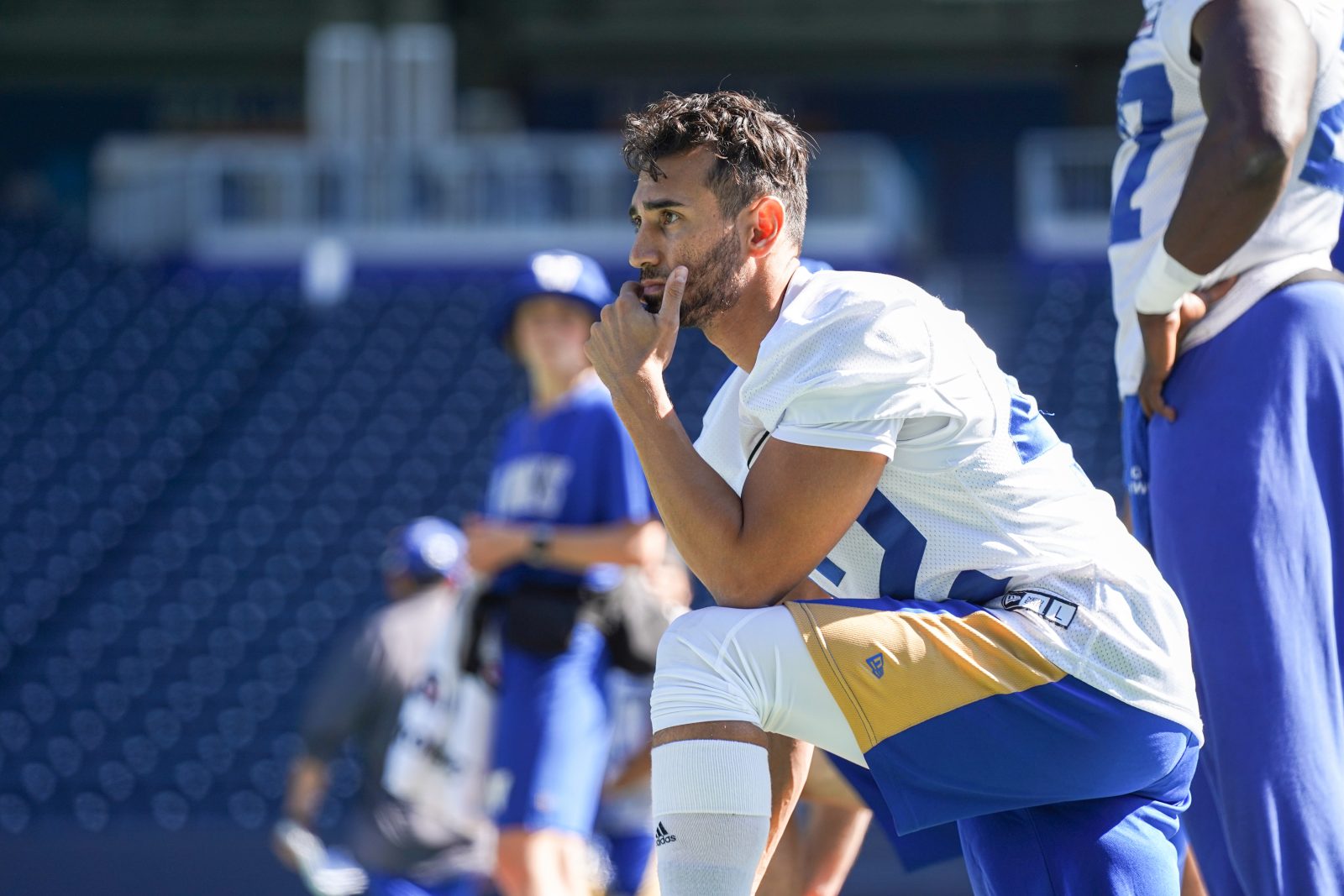 “It didn’t go the way I wanted”

Winnipeg Blue Bombers placekicker Ali Mourtada sat there for a good 15 minutes patiently answering question after question after question. And truth be told, during the course of his interrogation/interview, the only thing missing from the scene was a bare lightbulb hanging overhead and rings of rope wrapped around his body strapping him to the chair.

Yet, to his enormous credit the embattled Bombers placekicker answered every query about his 4-of-10 field goal woes – including hitting on just one of four tries in last Friday’s win over the Edmonton Elks – with a great amount of poise. He seems to have nailed that part – the dedication to his craft and professionalism – and now he needs to start hammering kicks through the uprights. The club will roll with Mourtada again this Friday in a return to the Alberta capital.

“There really isn’t too much I can say,” Mourtada told reporters during a Zoom call following Tuesday’s closed-to-the-media practice. “It didn’t go the way I wanted. Not many words can describe that.

“Now it’s just a matter of moving forward and making sure I improve and let it be backed by action as opposed to words. Things I’ve learned from, yes. But definitely moving forward I’ve definitely got to put the words into action.” 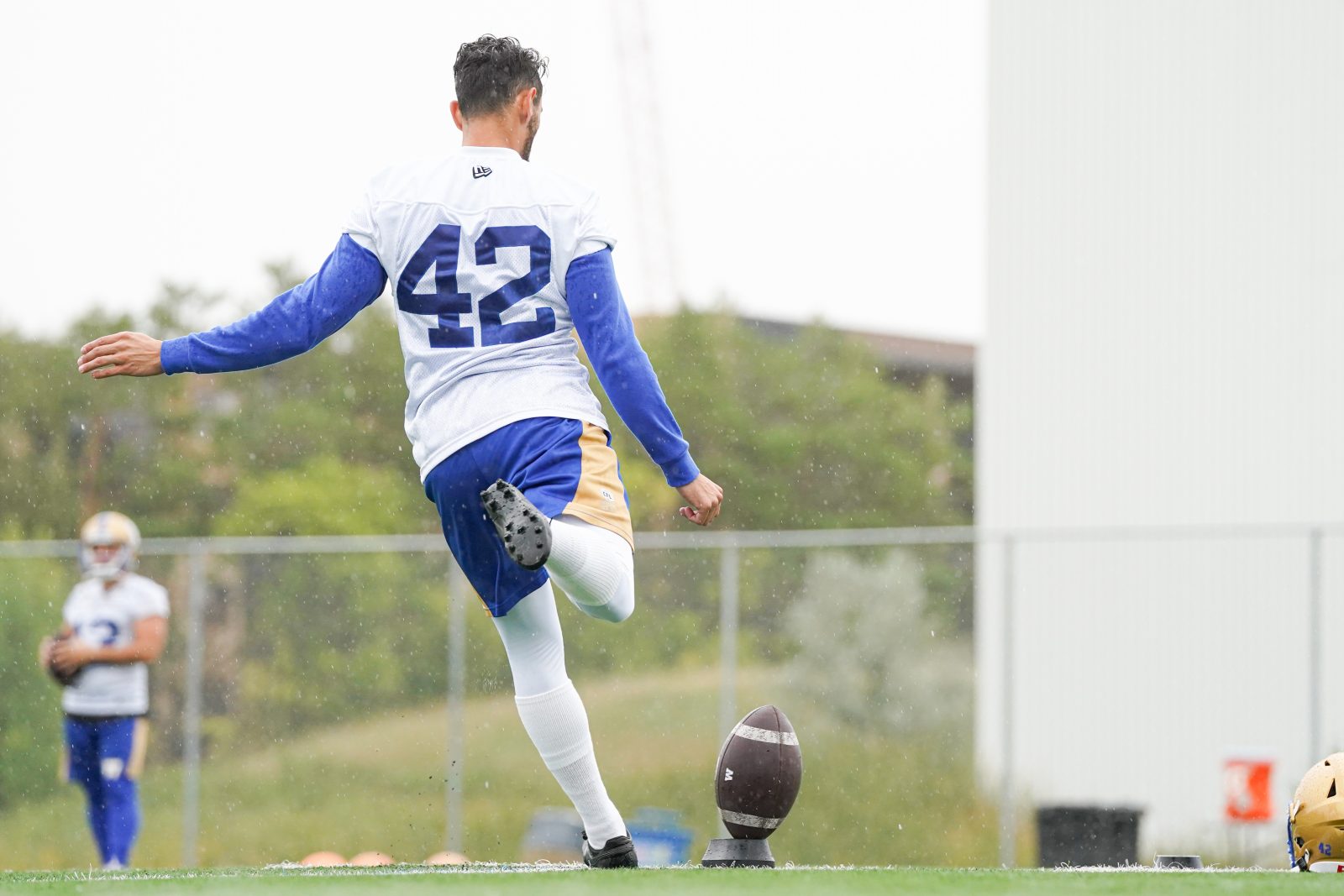 Mourtada was good from 24 yards on Friday, but missed from 42, 47 and 46 yards and also missed one of his three convert attempts. His other three misses this season were from 28, 51 and 44 yards.

“The thing I’ve remarked about him from the time we’ve worked him out is he hits the same ball every time in terms of how he strikes it, how clean the ball flies,” said Bombers head coach Mike O’Shea. “The ball flight is the same every time. There’s no hook, there’s no slice, there’s no duff… there’s none of those inconsistencies you see sometimes from other kickers. He kicks the same ball pretty well dead-straight every time.

“Now he needs to work on his angles and the hashes and that’s what he’s focused on, reaffirming the view from the different hashes and the different angles. It is a process, but I see a guy very committed to the process. He’s not an excuse maker. He understands he needs to keep working and that’s what he’s doing…  I do think the correction is slight… we just have to land on the right correction.

“It’s very simple to just judge it as ‘made it or didn’t make it,’” added O’Shea. “If you look beyond that and look at all the aspects around kicking, he’s a good kicker. My job is to coach and make sure I’m giving him everything I can and try to give him exactly what he needs for him to find that spot again because he’s had it before. It’s my job to help make him more successful. That’s what I’ll focus on.”

Despite his long session with the media on Tuesday, Mourtada knows he’s into ‘put-up or shut-up’ time.

“I don’t like making excuses as to why I’m missing,” he said. “From the film it just looks like it’s a little bit of an angle issue. If you see the ball they’re not hooking, they’re not pulling. They don’t have that trajectory. As it comes off my foot it stays on that line.”

“… It sucks to have a bad game. You’re not immune to those feelings of not performing to the standard that you have for yourself. So, yeah, it sucks. But after that, after that feeling of it sucking, you have to watch film, adjust, keep patient and work through it. Each kick is its own, one doesn’t really roll over into the other, so that’s why you’ve got to go one at a time.”

Finding a new kicker isn’t as simple as you may think, especially during an NFL season, and the Bombers have explored every available option. Even amidst that, Mourtada is well aware of the patience being shown to him by the club.

“It’s grace, man. It’s grace,” he said. “It’s definitely not something that happens very often, if at all. That’s just something I am thankful for and I want to take advantage of that opportunity. That’s not given to everybody and I know that. Now I’ve got to do what I’ve got to do to make sure that I do my part for the team and show that it’s the right choice to make.

“It’s grace. It’s having amazing teammates, amazing coaches, that see it within you an know your work ethic. Even with that the case with some guys that’s not always the way with kickers. It was Thanksgiving (Monday) here in Canada and that’s something for sure I was thanking God for: that there is some grace here and they still have some faith in me to do it.”