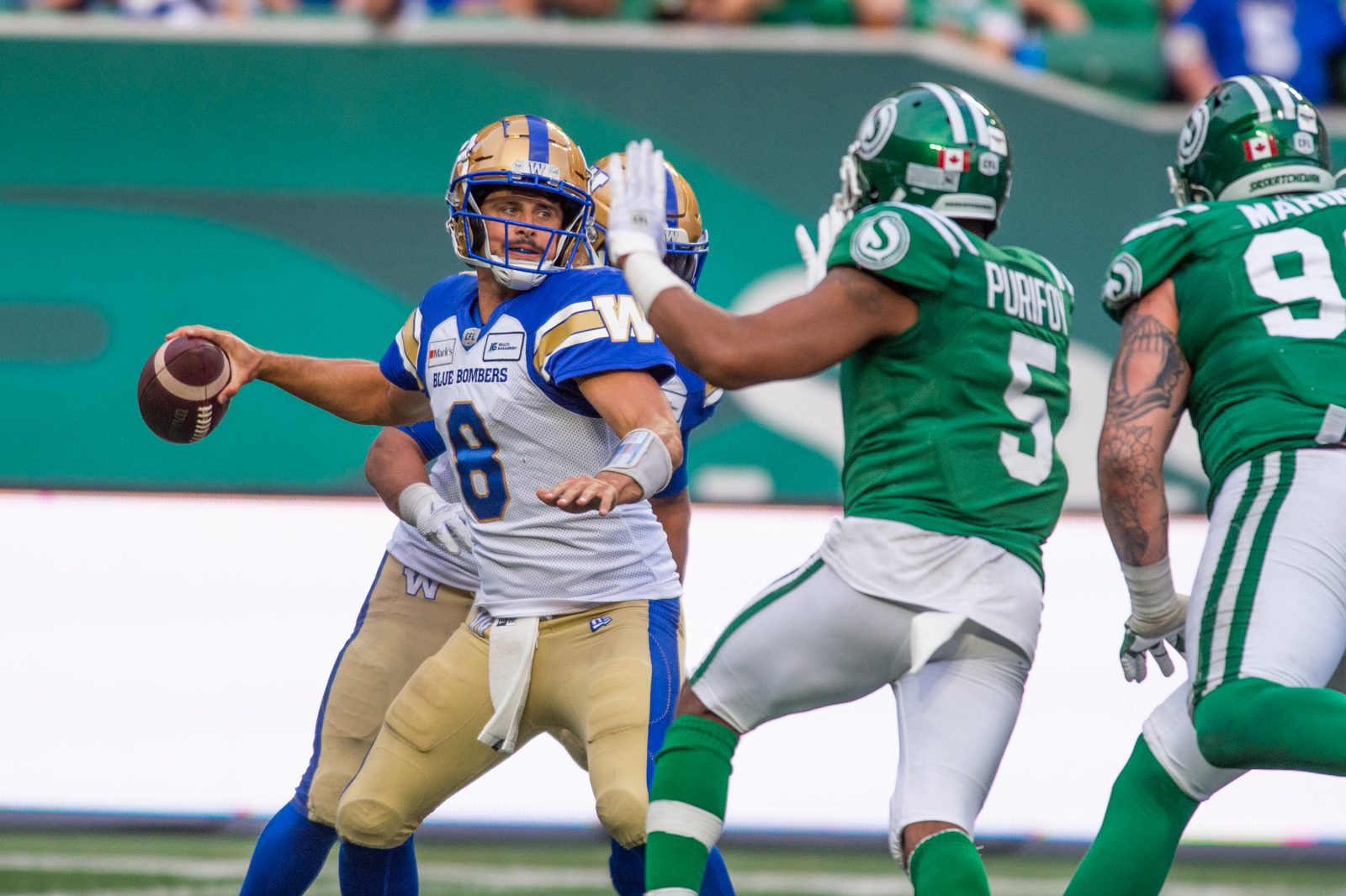 REGINA – It was a street fight in every definition of the term, with two arch-rivals trading punch after punch, jab after jab, uppercut after uppercut. And while the Winnipeg Blue Bombers and Saskatchewan Roughriders didn’t light up the scoreboard, they did deliver a dandy in Sunday’s Labour Day Classic at Mosaic Stadium in which the pads were popping and the Canadian Football League’s two heavyweights went toe to toe for three hours.

In the end, it was the Bombers who exited with a massive 23-8 win that improves them to 4-1 and moves the defending Grey Cup champions into top spot in the West Division. The Riders suffer their first loss of the season and fall to 3-1.

“Every time we play them it’s (a dogfight),” said Bombers head coach Mike O’Shea. “Both sides expect it. They know it’s going to be a tight game. We did happen to get some breathing room with about five minutes to go, which you may think feels good, but that feeling is fleeting because you know they’re a good football team. Their offence has the ability to drive down the field, their defence has the ability to make big plays. Our guys played extremely well in a dogfight.”

The Bombers defence delivered an absolute gem on Sunday and in the process shut down the CFL’s highest scoring offence entering the week, with the Riders having averaged 26.7 points in their first three games. The defence brought heat from start to finish, registering three sacks, forcing five turnovers – including three interceptions – while limiting the Riders to 260 yards in net offence. The Riders offence didn’t get into the Bombers red zone until their last possession of the game, and turned it over on downs in that situation. 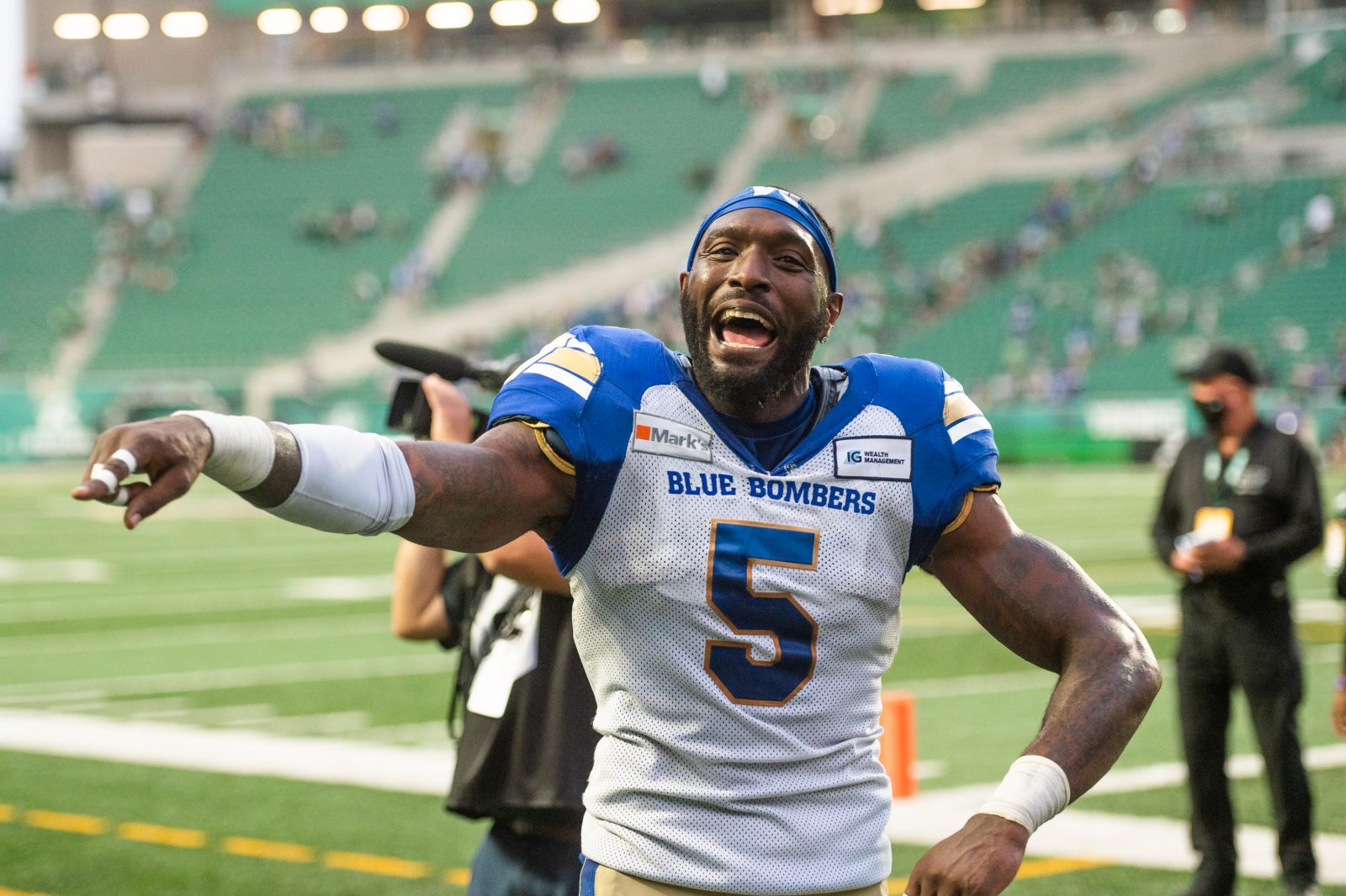 “Huge game,” said Bombers defensive end Willie Jefferson. “It was just sticking to the game plan and doing what we have to do – trying to get off the field on two and outs and making it hard for Cody (Fajardo) to find his reads early, being in his face and getting him off his spot, making him have to throw his spot on the move.”

Under pressure all day, Fajardo was 23 of 39 for 213 yards with zero touchdowns and the three interceptions – two by Brandon Alexander and a third by Deatrick Nichols.

“We definitely had a good pass rush,” said Alexander. “I know one of those balls got tipped at the line and it was wobbly and up in the air. I just think our defence played well together. We’ve got a couple of things we’ve got to clean on that side but, collectively, on defence we definitely put it on and the offence came out and really took care of what they needed to.”

The Bombers offence, meanwhile, cranked out 18 first downs and 366 yards offence, including 125 along the ground. Zach Collaros finished the day 19 of 27 for 245 yards with a picturesque touchdown strike to Nic Demski and one interception. The Bombers also got two QB sneak touchdowns from Sean McGuire. Worth noting here: Collaros is now 5-0 in Labour Day Classics with Winnipeg, Saskatchewan, Hamilton and Toronto.

“It was definitely a dog fight, definitely a lot of physicality going on,” said Collaros. “They’re a great, great defence. I thought we did a pretty good job running the football early on, it kind of sputtered there in the second quarter. But the third quarter was really big for us and to have a drive into the wind and convert it on a touchdown was huge. We were able to make enough plays there to give us the lead and our defence all night was making plays. It was just an overall team effort.”

Andrew Harris rumbled for 95 yards on 18 carries as the Bombers effectively owned by sides of the line of scrimmage.

“So far this season it’s been a slugfest in every game we’ve had,” said Harris. “Maybe that’s our MO this year – we like to grind out those games and keep them close. You’ve got to give respect to Saskatchewan; their defence was stingy. That was definitely a dogfight, and one that went on for 60 minutes.” 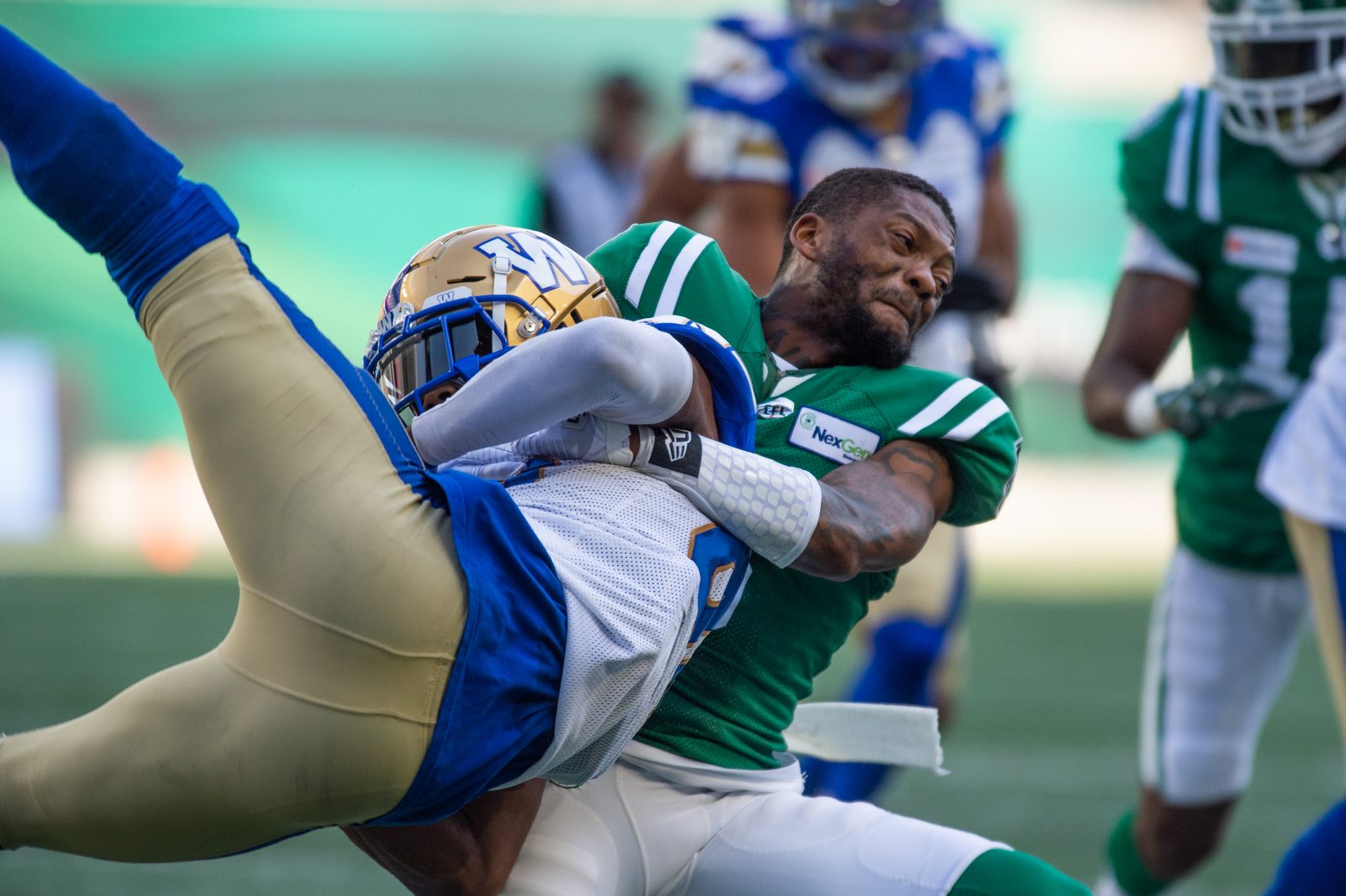 The Bombers have now kept a team under 10 points in three of their five games this year.

Bombers running back Andrew Harris had 95 yards along the ground to move past Joffrey Reynolds (9,213) to move into seventh place on the CFL’s all-time rushing list.

FYI: The Bombers inactive player for the fifth straight game was OL Geoff Gray… Winnipeg led 7-0 after the first quarter, marking just the fifth time in the last 16 years they held a lead after the opening 15 minutes… Mike Miller added to his all-time special-teams tackles total with four more, giving him 196 in his career… Alexander’s two picks marked the first multiple-interception game of his career… LB Jesse Briggs was injured late in the fourth quarter and was replaced by Global player Les Maruo. DT Ezekiel Rose, playing in his first CFL game, was injured in the first half and did not return… The Bombers challenged a roughing the passer penalty on Zach Collaros – his face mask was grabbed by a Riders defender – but the command centre ruled against the challenge.

NEXT: The Bombers home to the Riders next Saturday for the annual Banjo Bowl, with a 3 p.m. kickoff.