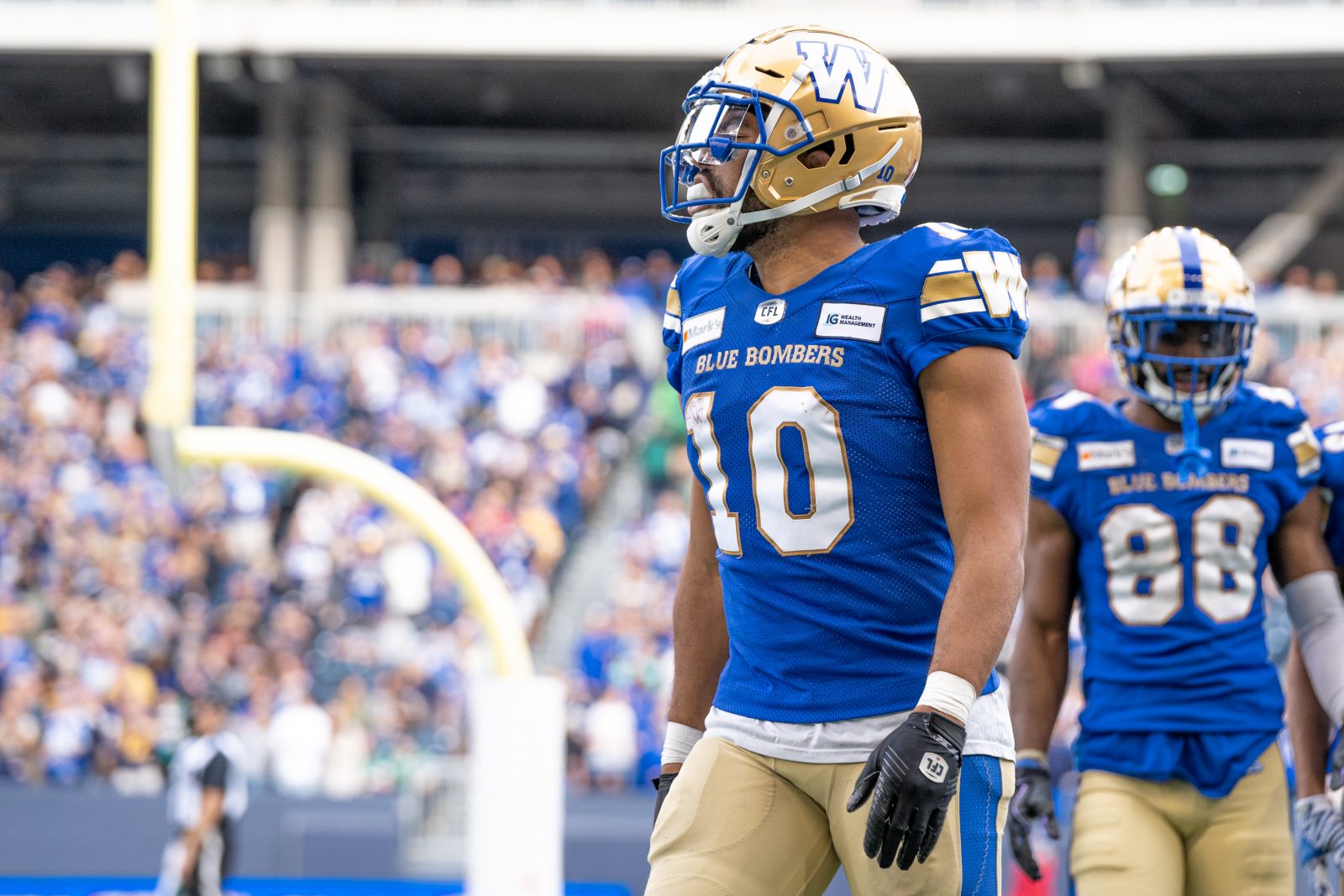 5 Quick Hits from Thursday — Day 5 of the Blue Bombers practice week leading up to Sunday’s annual Labour Day Classic matchup with the Saskatchewan Roughriders in Regina:

1. DEMSKI BACK AT WORK: The Bombers got a boost at practice on Thursday when veteran slotback Nic Demski was back working at his regular slotback spot with the starting offence, replacing Kelvin McKnight with the 1s.
“It felt good. It’s been a long time in my mind,” said Demski, who missed the last two games due to injury. “I mean, it’s only been two weeks, but just watching those boys go to practice and go to work and play in the games… the reason I play this sport is to go out there and compete and so it’s been a hard, long two weeks but I feel good mentally and physically.”
Demski had 13 receptions for 138 yards and a TD in the first two games for the Bombers and brings a versatility to the offence.
“He is a terrific athlete, he understands the system extremely well and he is tough to replace no matter what,” said Bombers head coach Mike O’Shea. “We’ll see if he’s available (to play Sunday).”

2. BRINGING THE NOISE, THE SEQUEL: Thursday’s practice was moved to the soccer complex, what with IG Field being turned around for Saturday’s Valour FC home match. But the change in venue didn’t stop the Bombers from working against the fake crowd noise — this time pumped out courtesy speakers on the back of a cart — to prep for the craziness expected Sunday in Regina.
“It helps on your focus. When audible communication is sometimes taken away with that noise you’ve got to rely on your other senses as well,” said Bombers offensive coordinator Buck Pierce. “For us, it just heightens all the other things. It makes us communicate even more. We have a veteran group of guys that have played in environments like this in the past. We’re excited for the opportunity to go in there and continue to work on our focus and our communication in other ways.”

3. HIGH PRAISE: The Bombers welcomed new receiver Naaman Roosevelt to practice on Thursday. The long-time vet watched the whole proceedings, but is expected to practice on Friday.
No determination has been made yet as to whether he will suit up on Sunday.
“I love Naaman as a person and I also love him as a football player,” said Demski of his former teammate during their days together in Saskatchewan. “He comes and puts his hard hat on every day and his production just shows for itself. I thought it was a great pick up for us. We have a great receiver room, but to add somebody like that is just going to give a little bit more of dynamic features to it.”
Roosevelt also worked with QB Zach Collaros before, and Pierce talked about the importance of familiarity.
“It’s not just a guy you’ve sat down and watched tape with, but a guy you’ve gone to battle with as well, and you’ve been through camps with,” Pierce said. “It’s a good thing they’ve worked together before. Also, when you look at the opportunity to add a veteran guy that’s had a lot of production in this league for another of number of years that’s a key piece for us. We’re excited about having him in the building and continuing to bring him along into how we do things here.”

4. QUOTABLE: Bombers DE Jackson Jeffcoat on the upcoming Labour Day Classic/Banjo Bowl showdown with the Riders:
“This is always fun, the Labour Day Classic game and then going to play the Banjo Bowl. We’re really excited to get out there and play. I love this game.
“When you’ve got a bunch of fans that are cheering against you one week and then you go home and they’re cheering for you, it just fun. It’s a big difference and I enjoy them both.”

5. VIEW FROM THE OTHER SIDE: If you think this rivalry lost some juice with the 2020 season being cancelled, think again. Here’s Riders DB Ed Gainey on this weekend’s matchup:

"When it comes to Winnipeg, all I want to do is win." – @Multifacet_ED@sskroughriders & @Wpg_BlueBombers goes Sunday: That is all.