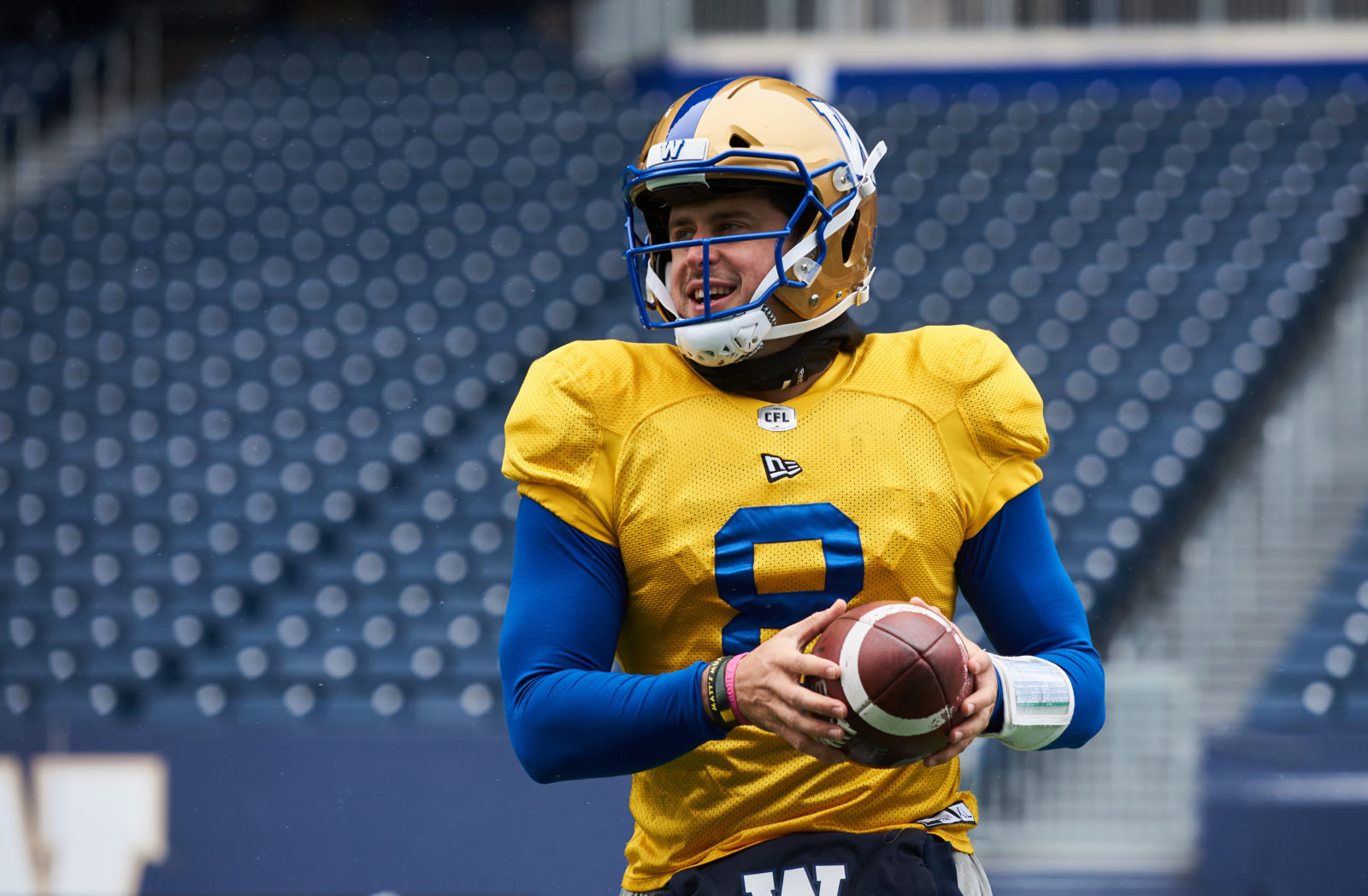 The Winnipeg Blue Bombers open training camp July 10th. This is the eighth and final installment of our annual positional-preview series leading up to the first day…

The Winnipeg Blue Bombers will open camp this week with Zach Collaros as the unquestioned No. 1 quarterback – of that there is no debate.

After all, that’s what going unbeaten in your starts and helping the team end a 28-year championship drought can earn a man: not only the adulation of a Grey Cup-starved fan base, but a brand new contract and a fresh start.

Here’s the interesting thing about all that: Zach Collaros has made exactly one regular-season start for the Blue Bombers. Heck, yeah, the three in the playoffs were absolutely meaningful, but the story of his arrival is testament to the old expression that ‘timing is everything and if it’s mean to happen it will, at the right time and for the right reason.’

Acquired in the dying moments just before the close of business at the CFL trade deadline in October of 2019, Collaros was added after Matt Nichols had been shut down for the season with an injury and with Chris Streveler feeling the accumulative effects of taking a pounding in his starts in relief.

Collaros made an instant impression with everyone on and off the field and when the ’19 season ended the club had a serious decision to make: hitch their wagon again to Nichols, who was so vital in the franchise turnaround but was coming off shoulder surgery on his throwing arm, or to the man who was 4-0 in his starts and took the final knee in victory in the Grey Cup.

All this means that for the first time since the summer of 2016 the Bombers will enter camp with a new clear-cut No. 1 QB behind centre. Collaros’ skill has never been questioned – he was twice named the Hamilton Tiger-Cats Most Outstanding Player – but he has been crushed by injuries in recent seasons, having not played a full 18 games since 2017.

That makes the man directly behind him on the depth chart – the talented but untested Sean McGuire – one of the most-intriguing players not only heading into training camp, but the regular season.

Offensive coordinator Buck Pierce and the Bombers coaches love McGuire’s toughness, his arm and his leadership ability, but with just three pass attempts to his name there will be questions about how vulnerable the defending Grey Cup champs are if Collaros goes down.

You see, not only has Nichols exited – first to Toronto and then to Ottawa – but the club has also lost Streveler and his unique rhino-in-a-quarterback’s-body skillset to the Arizona Cardinals.

To offset that, the club has also brought two interesting prospects into camp in former Hawaii/Oklahoma State starter Dru Brown and Dalton Sneed, who threw for 47 touchdowns and over 6,000 yards in his last two seasons at the University of Montana. Still, with no preseason games that pair must truly be seen as projects heading into the ’21 campaign.

So there are essentially two storylines in play here at the same time as the Bombers ready to open: the excitement of what Collaros could do with this offence and with his receiving corps with a full training camp under his belt, and the underlying worry – just as it would be with any team and their QB1 – of what life might look like without him. 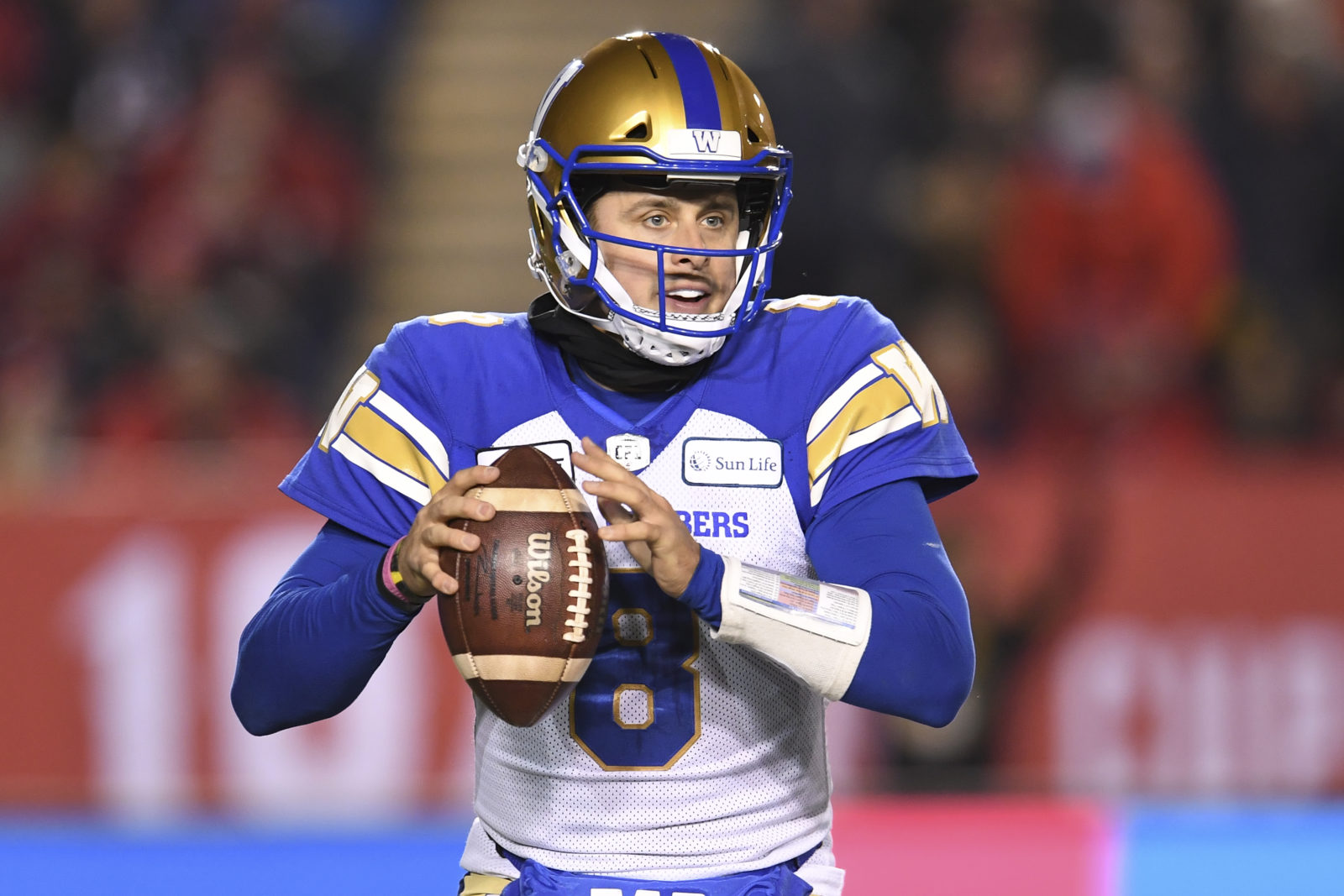 A LOOK AT THE QUARTERBACKS

We’re not trying to be cute here, but the reality is spelled out above. Collaros was 22 of 28 for 221 yards with two TDs and one TD in his lone regular-season start. And while he was a quick study of the offence and those around him in the spectacular playoff run of ’19, he comes into camp with less games played with the Bombers than McGuire, the man listed behind him on the depth chart.

This isn’t just about Pierce replacing Paul LaPolice as offensive coordinator after the latter moved on to the head coaching gig in Ottawa. Think of it this way: Bombers QBs will benefit from having one of the most-respected coaches in the CFL now leading their room AND the offence. Pierce was in high demand across the CFL over the last few seasons, but opted to stay with the Bombers not just because he liked Winnipeg and his family is here, but because of this very opportunity.

Collaros posted a 105.6 QB-efficiency rating in his four starts with the Bombers. Small sample-size yes, but only two other QBs had a higher rating in 2019 – Nick Arbuckle at 106.5 and Nichols at 107.2.

The Bombers went 41-21 under Nichols from 2015-19 and, even though the injury limited him to 11 starts in ’19, he did lead the club in passing for five straight seasons.