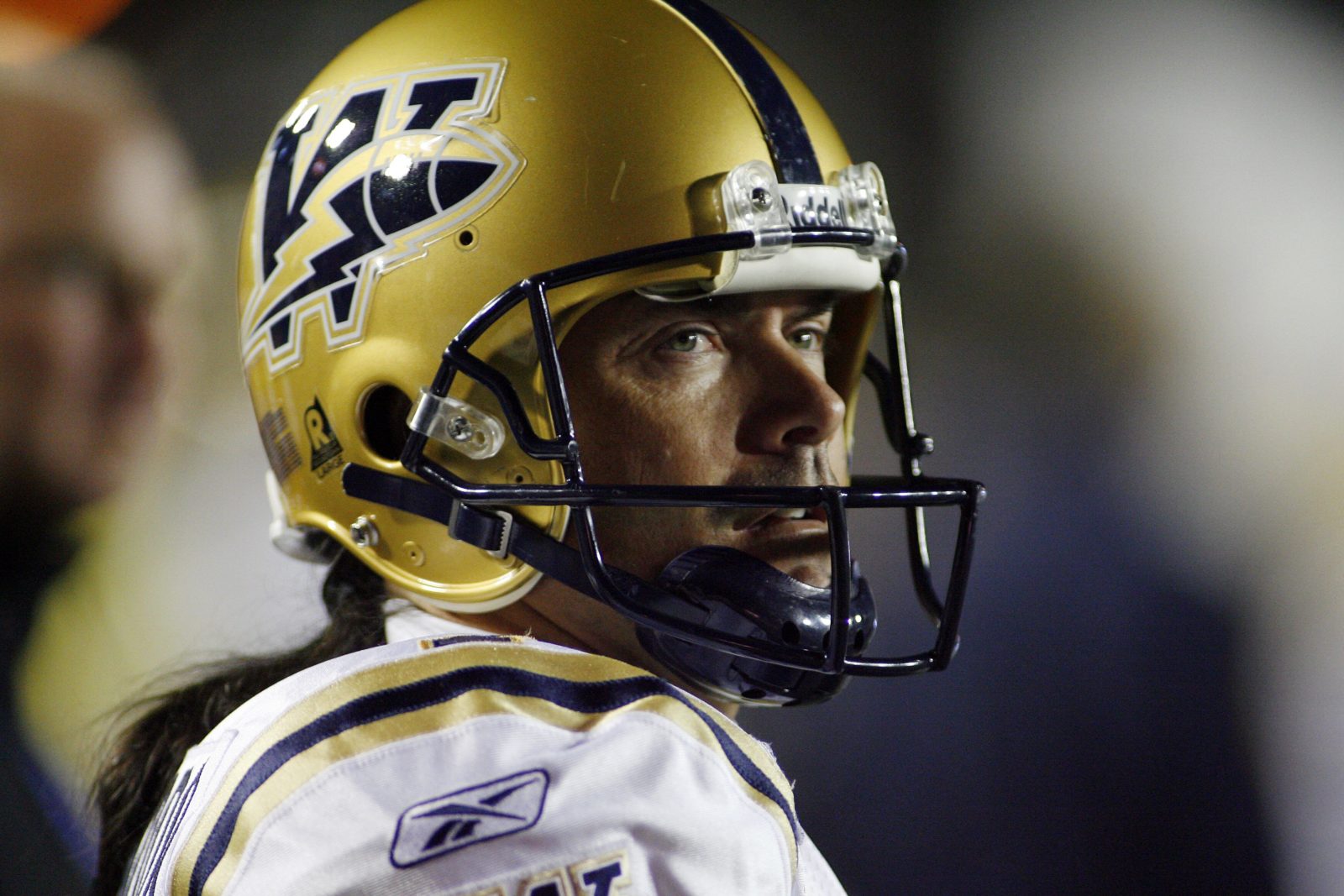 There are many Canadian Football League fans, myself included, who have our collective fingers crossed while eagerly waiting for any kind of news about a 2021 season – understanding, of course, the global pandemic means any plans are scribbled in pencil, not ink.

The next update, FYI, likely comes in a virtual town hall with fans Commissioner Randy Ambrosie is scheduled to host later this month during what would have been Grey Cup week.

On top of that, what so many are wondering – again, myself included – is not just what the CFL might look like next season and whether games are played in front of smaller audiences or audiences at all, but whether the league has taken this ‘opportunity’ to recreate itself in some manner..

Look, the CFL is in my blood. I’ll always be there waving the flag for this grand ol’ loop. That said, I’m also not part of the demographic the league needs to be targeting now. The majority of diehards will be back on board for 2021 and be attending – if possible – whether the games are held on a Thursday, Friday, Saturday or Sunday afternoon. Heck, they’ll be there if a game is scheduled for a Monday morning just after breakfast.

Still – and this is a drum that’s been banged on vigorously for years – there’s a segment of the CFL’s fan base, and a segment with the most room for growth, that sees a home game as a chance to get out and party on a Friday or Saturday night.

They’re not the cottage crowd that despises weekend games. They don’t complain when the music is rattling the PA speakers. And they certainly don’t sweat having to make a long walk from their parking spot to their seat. 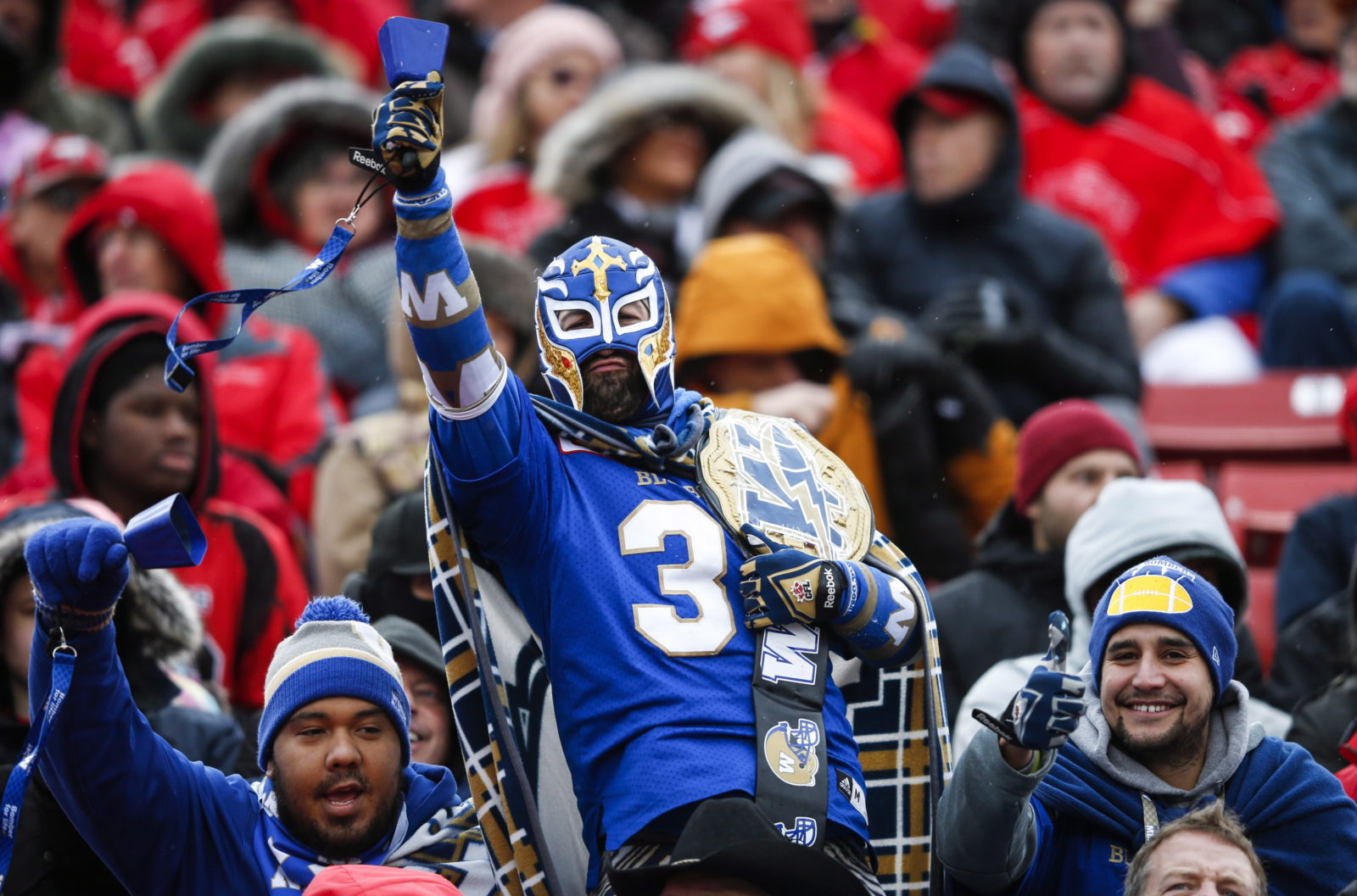 I was reminded of all this while participating in a Zoom call hosted by James West, the Canadian Football and Winnipeg Football Club Hall of Famer, which also included the legendary Bob Irving, former Global sports director Joe Pascucci and TSN play-by-play man and proud Winnipegger Rod Black.

We reminisced about our starts in the business, the joy of still getting to do this all these years later and our undying love for the CFL. And it was during our discussions when Rod made the comment that the league needs to remember its traditions and its history while also trying to attract new customers.

That’s a valid point and it’s not unique to the CFL.

It should also be stated that one certainly doesn’t have to come at the expense of the other. Anyway, that’s my mini take to start this week’s collection of notes, quotes and anecdotes we call 1st & 10…

1. Earlier this week I watched a 22-minute documentary on CBC on ‘Eagle and Hawk’ – the influential Indigenous band that has thousands of fans and has toured the world on a number of occasions.

One of that band’s founding members, along with Vince Fontaine, just so happened to be the all-time leading scorer in Blue Bombers’ history – Troy Westwood. I touched base with Westwood to discuss the documentary and, during a long chat, was reminded again of how much music still means to him.

At the same time, as the documentary points out that as Eagle and Hawk returned from a European tour in the spring of 1997, Westwood had a decision to make – the band was being asked to tour overseas again, but he had his gig with the Bombers to consider.

It was the proverbial crossroads for Westwood – choose music or football.

“I mean, I was in my hometown playing for the team I always wanted to play for… it was a dream and I couldn’t be pulled away. Maybe if I was 12 years into my career I could have been pulled away, but I’m not even sure about that.

“Inside of me, in my heart, my level of love for music could only be trumped by my love for sport and to be involved competitively. There’s nothing competitive about music to me… I know some musicians feel that way, but I see it much more as being a community. Sport is my most foundational or primal that way. But it was an internal battle for me, for sure.”

The documentary is excellent, and can be found here.

And the news story on the documentary release is here. 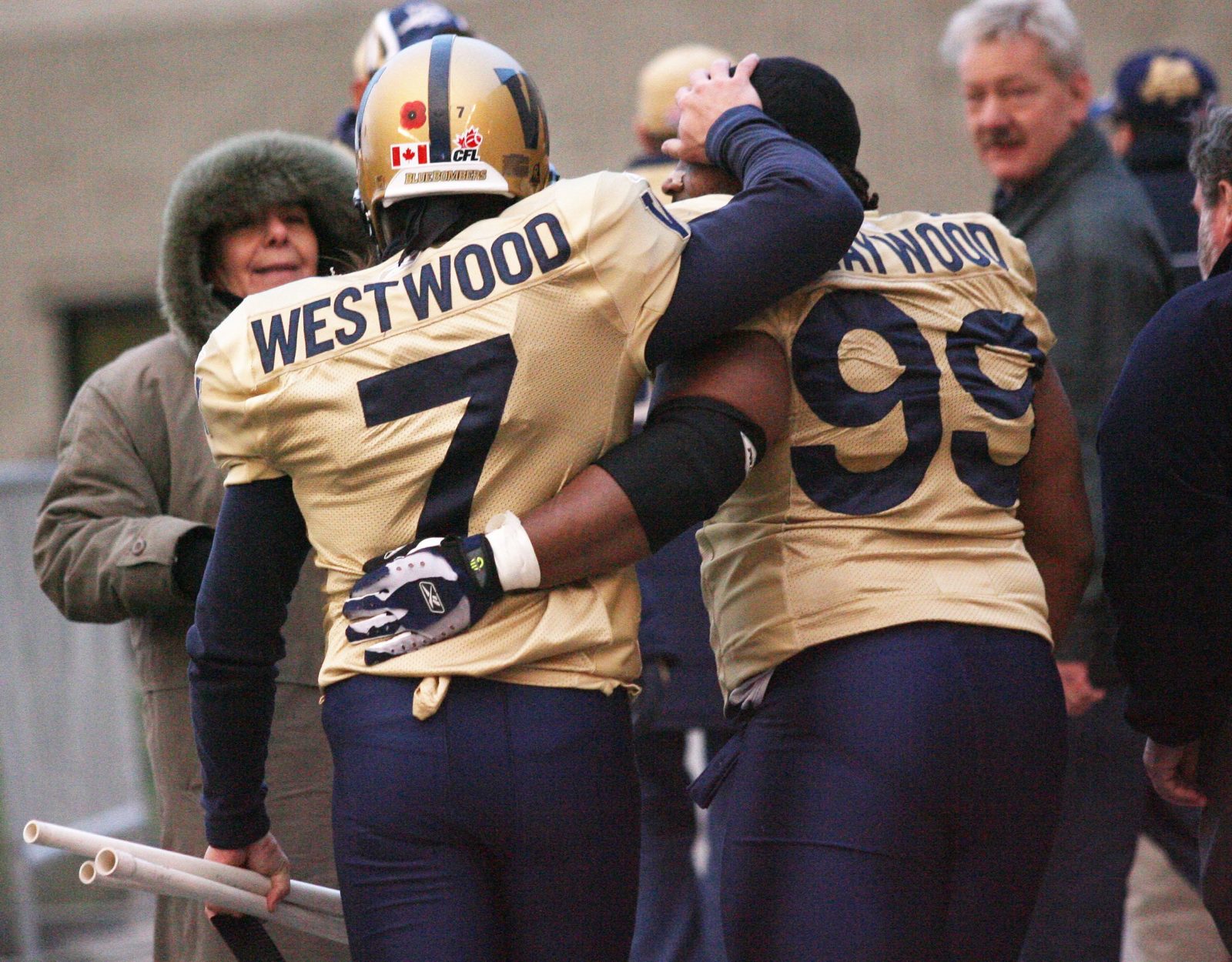 2. A couple more from Westwood… just for the record, he is not of Indigenous descent. But…

“I get asked that a lot. A lot of people think I am First Nation or some people are mystified by my connection, but undeniably it’s the way I feel,” said Westwood. “And with my wife being Metis, it just feels natural to me, man.

“I’ve always been around people who are First Nations and when I went to college in South Dakota (Augustana) my interest became that much stronger. When I came back and befriended people like Vince and met people like Dave Courchaine and his family in Sagkeeng who ultimately ended up traditionally adopting me and being around a fella like Mike Calder and a long list of individuals… they really influenced me a lot. Their culture and the way the world is understood was a spiritual thing for me in a lot of ways.

“Then I took part in ceremony – I sun-danced, I went to sweat lodges – and that became my life. It was what made the most sense to me, the First Nation understanding of the world around us. It feels like home.”

3. Westwood didn’t give up music when he chose to leave ‘Eagle and Hawk’. Far from it, in fact. He embarked on a solo career as ‘Little Hawk’ – you can find his albums on Apple Music, iTunes and Spotify – that included four albums featuring songs that broach subjects such as murdered and missing Indigenous women and residential school claims.

His first album – ‘1492-1975’ – was based on 500 years of North American First Nations history. I can still remember seeing Westwood on flights reading and making notes.

“It took me two years to write the lyrics to my first solo album,” said Westwood. “There was one book I was carrying, ‘The Spirit of Crazy Horse’ (by Peter Matthiessen) and that was the first song I wrote for the album, which tells the story of Leonard Peltier in South Dakota… I carried that book on road trips with the Bombers for about four months.

“Guys would be teasing me, ‘Hey Westwood, how long does it take you to read that book?’ I was studying it, almost like a Bible. I read it four-five times and would have all these papers with notes. That process was a real neat thing and a compliment to my playing football at the time.”

Now a fixture on TSN 1290’s Big Show, Westwood has passed along his passion for music to his son Trey, who is playing both piano and guitar. And while he is focused on his career in sports radio, the musician/artist is still there in him.

“If anybody wants to know my heart and soul, from a lyrical standpoint it is all right there. Anyone that wants to know me, go read my lyrics and that is a direct reflection of everything in my soul,” he said. “I always felt something in me, it just wasn’t defined I don’t think. The evolution of it was very gentle and it just continued to grow… it’s 30-plus years at this time.

“I love talking sports. Absolutely love it. But I could also talk all day about music.” 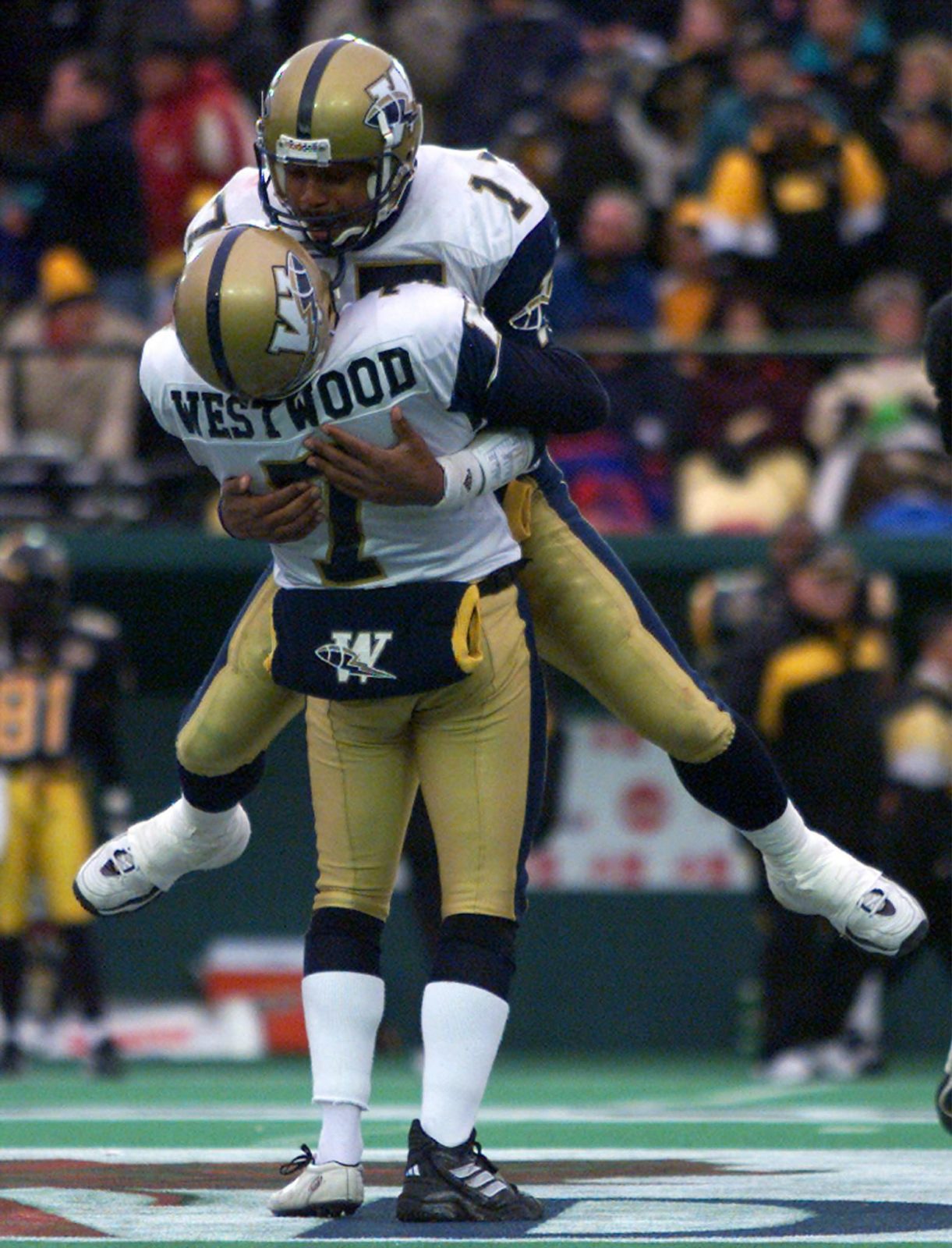 4. We’ve written often on bluebomers.com about the Matt Dunigan 713 game – that night from July of 1994 when the Bombers’ QB obliterated the CFL record for passing yards in a single game, which still stands.

CFL.ca’s latest ‘Remote Reunion’ features some of the stars from that game – Dunigan, receivers Alfred Jackson and David Williams, offensive linemen Chris Walby and Miles Gorrell and punter Bob Cameron – as they watched footage of the game together.

Just for some context, that game was a rematch of the 1993 Grey Cup – Winnipeg vs. Edmonton, won by the Esks against a Bombers squad minus Dunigan, who was injured and had been replaced by Sam Garza.

“That (win over Edmonton in ‘94) didn’t put a ring on our finger,” said Dunigan in the ‘Remote Reunion’, “but it kinda set the tone for another great season.”

The Bombers went 13-5 that year, but fell 14-12 to the Baltimore Stallions in the East Final.

The story of how the league got videotape of that game – it was not televised – and then matched it up with the stats sheet is also compelling.

“It’s cool to watch the game and see some of the other things, the fumbles and some of the things that don’t work well for you,” said Walby. “It’s neat for me to see the whole package, as opposed to just A.J.’s 82 touchdowns and Williams’ 100-million catches.”

Both Jackson and Williams broke the Bombers’ single-game receiving record that day, with Jackson’s 308 still standing as the all-time mark.

Check out the story and video here:

5. By the way, if you’re missing your Bombers football as much as thousands are, over the next three Sundays the club’s Facebook page will feature the West Semi-Final, West Final and 2019 Grey Cup.

The semi-final victory over the Calgary Stampeders will be played at 3:30 p.m. on Sunday.

Join us the next three Sundays as we watch the 2019 Western Semi-Final, Western Final, and the Grey Cup on our Facebook page!

First up, this Sunday we take on @calstampeders in the Western Semi-Finals.

6. Wonderful initiative launched by Bombers’ star Andrew Harris this week with his ‘Check-in Challenge.’ Harris asks for everyone to pick up the phone and check in on a friend during these times when so many are struggling.

Challenge friends and family members to join in on the #CheckInChallenge by using the hashtag on social media! https://t.co/W5pGXURUCq pic.twitter.com/4Wx27Lpt0m

7. It’s become a semi-regular part of our weekly First & 10 column as we check in on how Thiadric Hanson and the Wroclaw Panthers are doing in Poland. The Bombers’ defensive end is one of the Panthers’ stars and the club crushed the Bydgoszcz Archers 56-0 in the league semi-finals last week.

The Panthers will face the Bialystok Lowlanders in the Polish League final, giving Hansen to go back-to-back with championships – although not likely the way he would have imagined last November.

8. The Montreal Gazette’s Herb Zurkowsky has been cranking out quality copy about the Alouettes and the CFL for eons. This story on former Bomber QB Khari Jones – now the Alouettes head coach – returning to his acting roots is worth the time.

Recently Darren Cameron tracked down the hall of fame running back in Henderson, Nv. and he agreed to join us for almost an hour on our ‘Handled Internally’ podcast.

Roberts works in the hospital there now and in our conversation, we touched on his ‘unique’ exercise routine.

“I’d get up, rollerblade in, practice, and then rollerblade home. That was my training,” said Roberts. “I did the rollerblading thing and the biking because I knew (his teammates) got a kick out of it. And, I enjoy rollerblading.”

“I’d get up, rollerblade in, practice, and then rollerblade on home. That was my training.”@CFL Hall of Fame member Charles Roberts joined @EdTaitWFC & @Darren_Cameron in the latest episode of our Handled Internally podcast!

10. And, finally, excuse me – Mr. Cameron is far too humble – while I reach around and try to slap myself on my back, but our little podcast is starting to pick up momentum. This week it hit the 1,000 podcast-download mark. We thank those who have listened and more are coming soon.