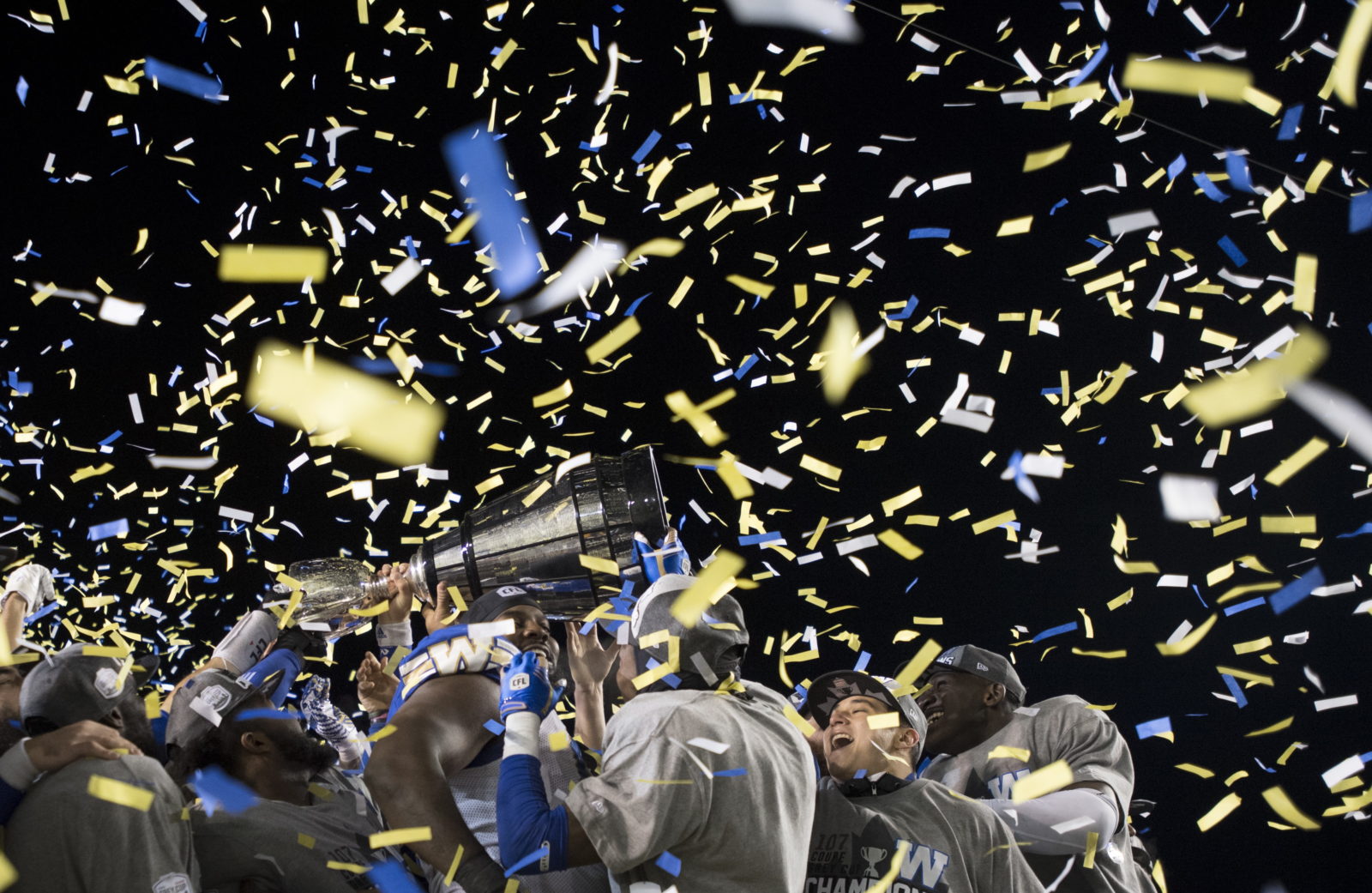 It’s almost impossible not to stroll down memory lane these days and think about what once was, while also wondering what might be on the horizon ahead.

Sports all over the planet have been put on pause, and rightfully so. And for those of us who are so engaged in all sporting activities – either as athletes, fans or chroniclers of it all – the complete disappearance of any ‘live’ event where they are keeping score has been numbing.

Instead, we are now served up re-runs of epic games of yesteryear, wrapped around events like the “Johnsonville ACL Cornhole Championships’ and the ‘2019 Jelle’s Marble Runs’ – both of which were televised earlier this week.

You can’t make this stuff up, people.

Anyway, it was while watching a repeat of the 2001 Grey Cup on ESPN Classics earlier this week – a simply dreadful day for the Winnipeg Blue Bombers in which a spectacular 14-4 season was blowtorched by the Calgary Stampeders – when I started to take those initial steps down memory lane.

The press pass from that ’01 Grey Cup hangs among hundreds of others on the wall of my rec room, and seeing the images from that loss brought back a flood of memories from that season. And others, both good and bad, too.

It also got the wheels turning about all the Bombers games I’ve been fortunate to cover dating back to 1990 when the beat was first dropped into my lap. And in the spirit of all the classic games all over the TV schedule right now and the Top 10 lists being floated by sports media everywhere, here is my look at the most memorable Bomber games I’ve been fortunate enough to cover in person… 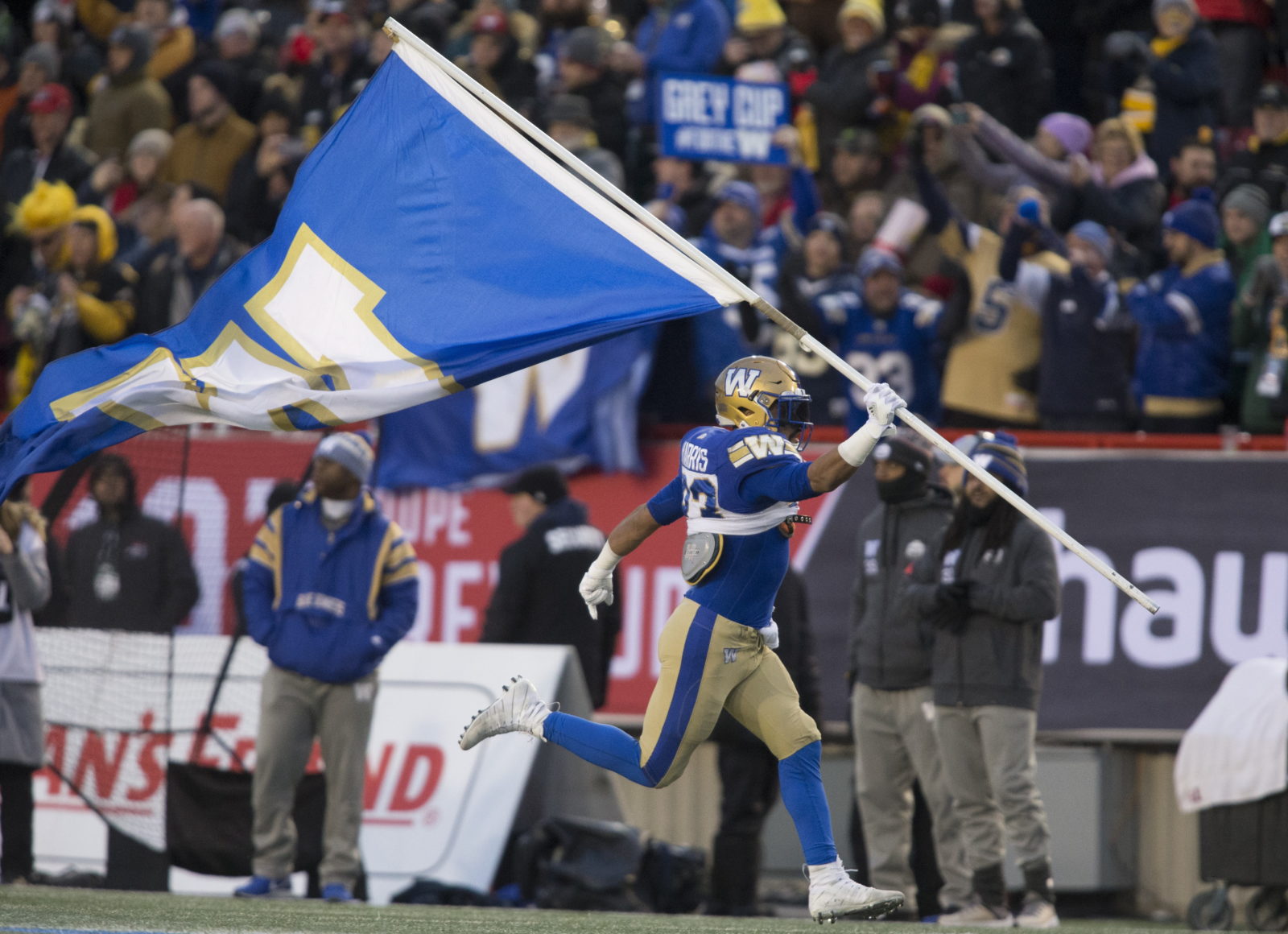 THE BACKGROUND: The Canadian Football League’s failed U.S. expansion experiment began in 1993 with the addition of the Sacramento Gold Miners. A year later the Las Vegas Posse, Shreveport Pirates and Baltimore CFLers (initially called the Colts, but changed due a lawsuit filed by the Indianapolis Colts) were added, making for a 12-team league. The CFLers, FYI, became the ‘Stallions’ a year later.

The Bombers finished first in the East Division with a 13-5 record, just ahead of the CFLers at 12-6. The two clubs then advanced to the division final in Winnipeg after the Bombers dispatched Ottawa and Baltimore did the same to Toronto in the semifinals.

WHY IT IS STILL SO MEMORABLE: Two plays stand out specifically from that game – a fumble by Baltimore running back Mike Pringle that was missed by the officiating crew and a late Matt Dunigan-to-Gerald Wilcox sure-thing TD pass that clanged off the crossbar in a two-point loss.

But it’s what happened a week later in the Grey Cup that provided even more context. During the CFL’s U.S. expansion days, the American teams were allowed to use an all-import lineup, while the Canadian clubs had to maintain their homegrown quota.

That created a contentious ‘US vs Them’ mentality during the season, and especially so during the Grey Cup – a backdrop to the championship game that will never be seen again. The year ended with Dave Ritchie’s B.C. Lions edging Baltimore 26-23 on a Lui Passaglia field goal on the last play of the game.

THE BACKGROUND: Year two of the Jeff Reinebold era. The Bombers went 4-14 in Reinebold’s first season and were 0-10 into September in 1998, with the average margin of defeat a whopping 14.1 points. And so it wasn’t just that the Bombers were awful, they were barely competitive.

WHY IT IS STILL SO MEMORABLE: The Bombers began the season with T.J. Rubley at quarterback, and the 0-10 start to the year was followed by the club falling behind 28-10 to the Saskatchewan Roughriders near the end of the third quarter. Enter Kopp, whose last experience had come with the Anaheim Piranhas of Arena Football. In his first stint at the controls he led the Bombers on a 105-yard TD drive and the Bombers scored again on the second drive. By game’s end the Bombers had eeked out a 36-35 victory that, at the time, was the largest comeback in club history.

Kopp started the following week in a loss to Toronto, but never again displayed that kind of mojo. Reinebold was replaced on an interim basis by Gary Hoffman in October with the club at 2-12 and the team finished 3-15. Dave Ritchie would become the next head coach in 1999.

But for one afternoon during a dark period for the franchise, Kopp & Co. delivered some magic. 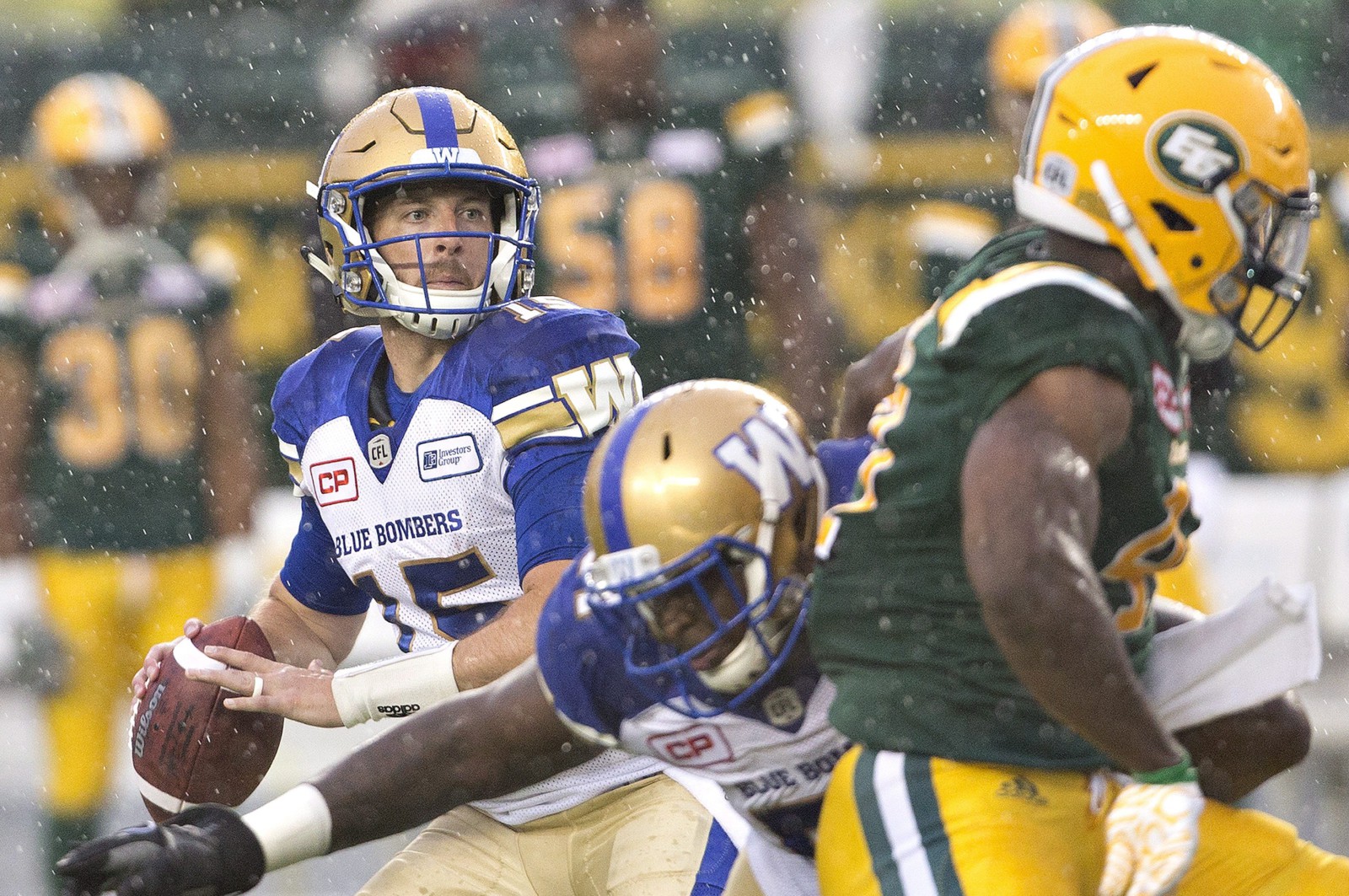 THE BACKGROUND:  The Bombers were 1-4 to open 2016 and, following a 2015 campaign in which the club was just 5-13, the vultures were circling above Chancellor Matheson Road expecting change. Matt Nichols had replaced Drew Willy at QB late in a 33-18 home loss to Calgary the week previous and was given the start – his first of 2016 – the following week in Edmonton against his old club.

WHY IT IS STILL SO MEMORABLE: It’s not just that Nichols helped stopped the bleeding of a poor start to the season by completing 26 of 33 for 304 yards with a TD strike to Darvin Adams.

That night in Edmonton the club found its winning formula – protect the football, pound it along the ground with Andrew Harris and have Justin Medlock kick field goals when drives stall. This game marked the beginning of a franchise turnaround as the club went on a seven-game win streak and has since qualified for the playoffs for four consecutive seasons, capped by last November’s championship.

THE BACKGROUND: The Bombers seldom, if ever, win on Labour Day weekend, but in the last LDC at the Roughriders’ old stomping ground, the visitors showed some fight in the middle of a seven-game win streak.

Winnipeg built a 19-3 lead late into the third quarter, gave up a punt-return score inside the final minute before Medlock kicked a 43-yard field goal on the last play for a 28-25 win that broke an 11-game LDC losing streak.

WHY IT IS STILL SO MEMORABLE: This one is personal. On the morning of the game the Bombers were informed that long-time Bombers marketing director and superfan Jerry Maslowsky had passed away. The players wore ‘JM’ stickers on their helmets and in the celebration after this was heard often: “This one’s for Jerry.” It was a sad, but perfect tribute. 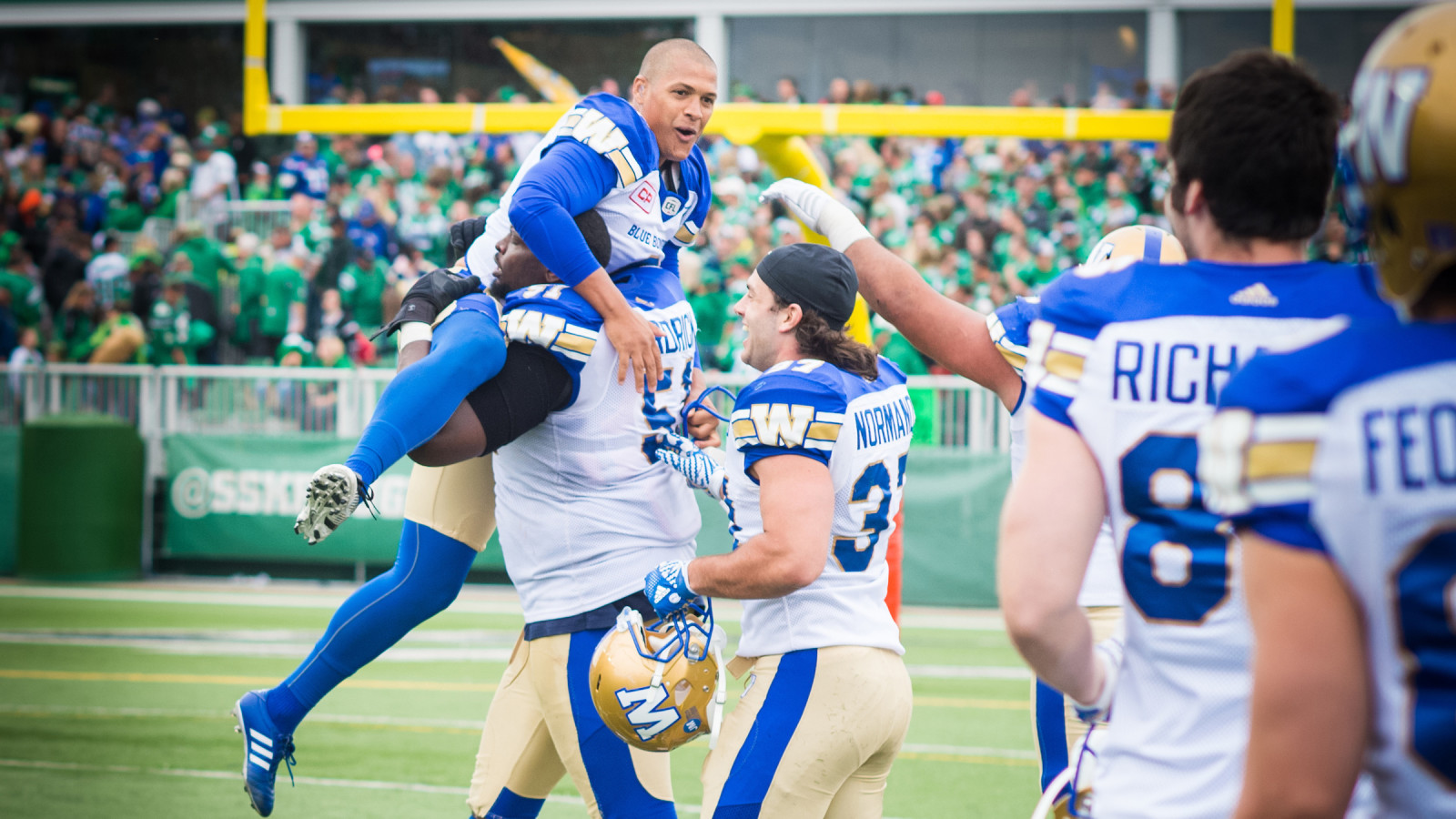 THE BACKGROUND: The Bombers had finished 9-9 in 1996 and headed into the division semi-final against an Edmonton team that was 11-7. The two clubs split their games during the regular season but this one, played on a skating rink doubling as Commonwealth Stadium, was over quickly. The Eskimos set CFL playoff records that still stand with points scored (68) and the largest margin of victory (61) in the worst loss in Bombers history, either during the regular season or the playoffs.

WHY IT IS STILL SO MEMORABLE: It’s not always sunshine and rainbows covering a professional football team. But venturing into the Bombers locker room after this loss was unlike any other. There was anger and disbelief. Brett MacNeil, the gritty Bombers O-lineman, flashed the scrapes on his arm he said were from the screw nails the Eskimos players had inserted into their cleats. And sadly, this was the last game Cal Murphy would coach before he was fired and replaced by Reinebold.

THE BACKGROUND: The result doesn’t much matter – although Charles Robert rushed for 159 yards and scored two TDs in a Winnipeg win – as much as how the game came to be. On the eve of the 2003 West Division Semi-Final, Bombers kicker Troy Westwood took a shot at Roughrider fans, referring to them as a bunch of ‘banjo-pickin’ inbreds.’ He doubled down later on his ‘apology’ stating: “I had referred to the people of Saskatchewan as a bunch of banjo-pickin’ inbreds. I was wrong to make such a statement, and I’d like to apologize. The vast majority of the people in Saskatchewan have no idea how to play the banjo.”

WHY IT IS STILL SO MEMORABLE: Many fans to the west of us took exception to Westwood’s comments and how the Bombers marketing department riffed on the idea. Some still find it offensive, but it has become a marquee game not just on the Bombers home schedule, but on the CFL schedule. Thousands of Rider fans now make the pilgrimage to Winnipeg, just as Bombers fans do a week earlier to Regina for the Labour Day Classic. 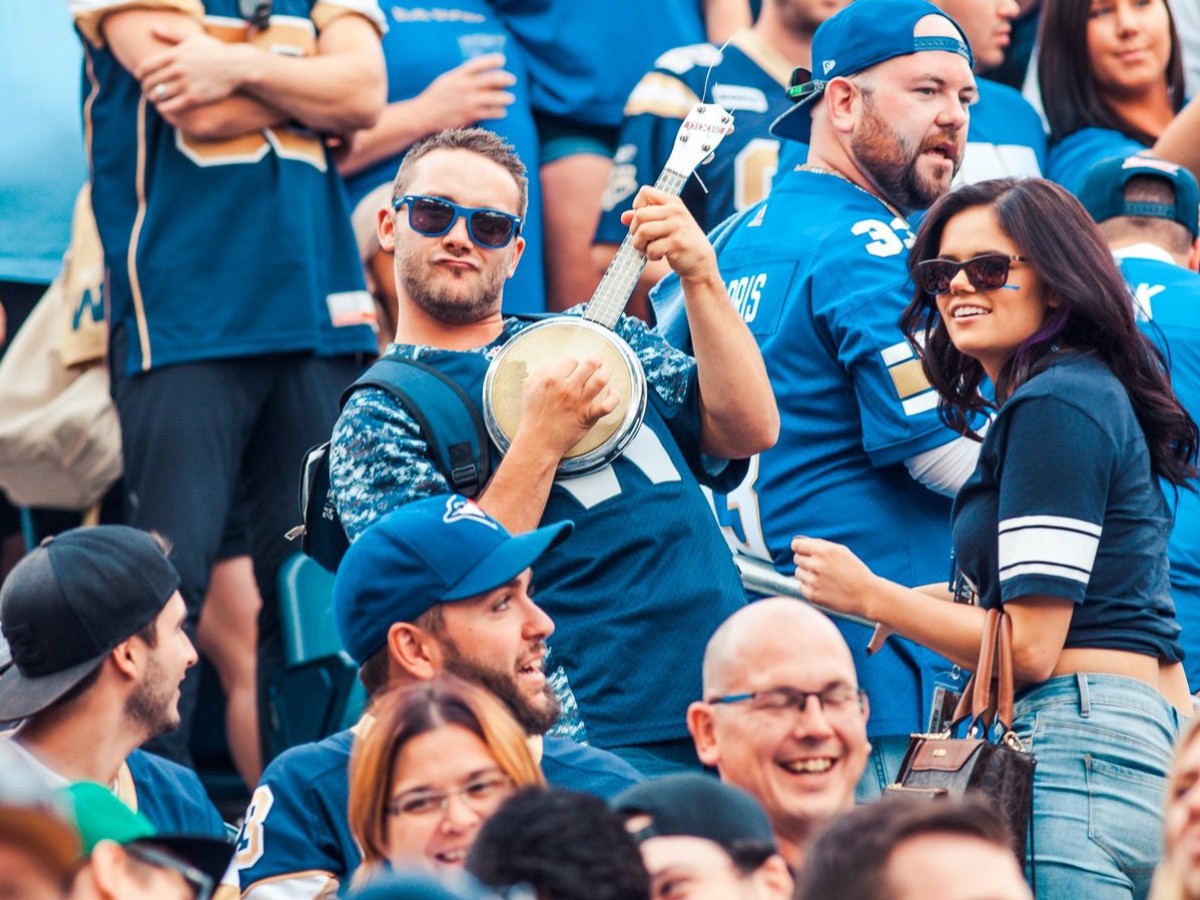 THE BACKGROUND: It is said that all records are made to be broken. That may be true, but some seem dang close to invincible and Stegall’s 147 career touchdowns is chief among them. One of the most decorated receivers in CFL history, Stegall surpassed both Mike Pringle and George Reed on this summer night, taking just a one-yard pass for his 138th career TD on a historic night in which the old stadium at Polo Park was absolutely buzzing

WHY IT IS STILL SO MEMORABLE: Stegall’s career is dotted with memorable moments, from the 100-yard, last-play reception in a win in Edmonton in 2006, to his 23 touchdowns scored in 2002 the year he was named the CFL’s Most Outstanding Player. This one, because of its magnitude, captured all of them in one single play.

THE BACKGROUND: The ’90 championship marked the end of a solid run for the Bombers that also saw them capture Grey Cup titles in 1984 and 1988. The Bombers made a trade for QB Tom Burgess on Canada Day and the move gave a squad dominated by its defence the stable play from the pivot position it craved. Burgess was the offensive MVP in the Grey Cup game, but it was a spectacular defensive performance – led by Greg Battle – that was critical.

WHY IT IS STILL SO MEMORABLE: It might be less memorable in the years ahead, now that the team’s 28-year championship drought was finally broken last fall. But any championship is still significant and what made this ’90 team special – a squad that liked to pound the ball with running back Robert Mimbs working behind a mammoth O-line while getting super defence and solid QB play – reads very similar to what Bombers fans just witnessed in 2019. 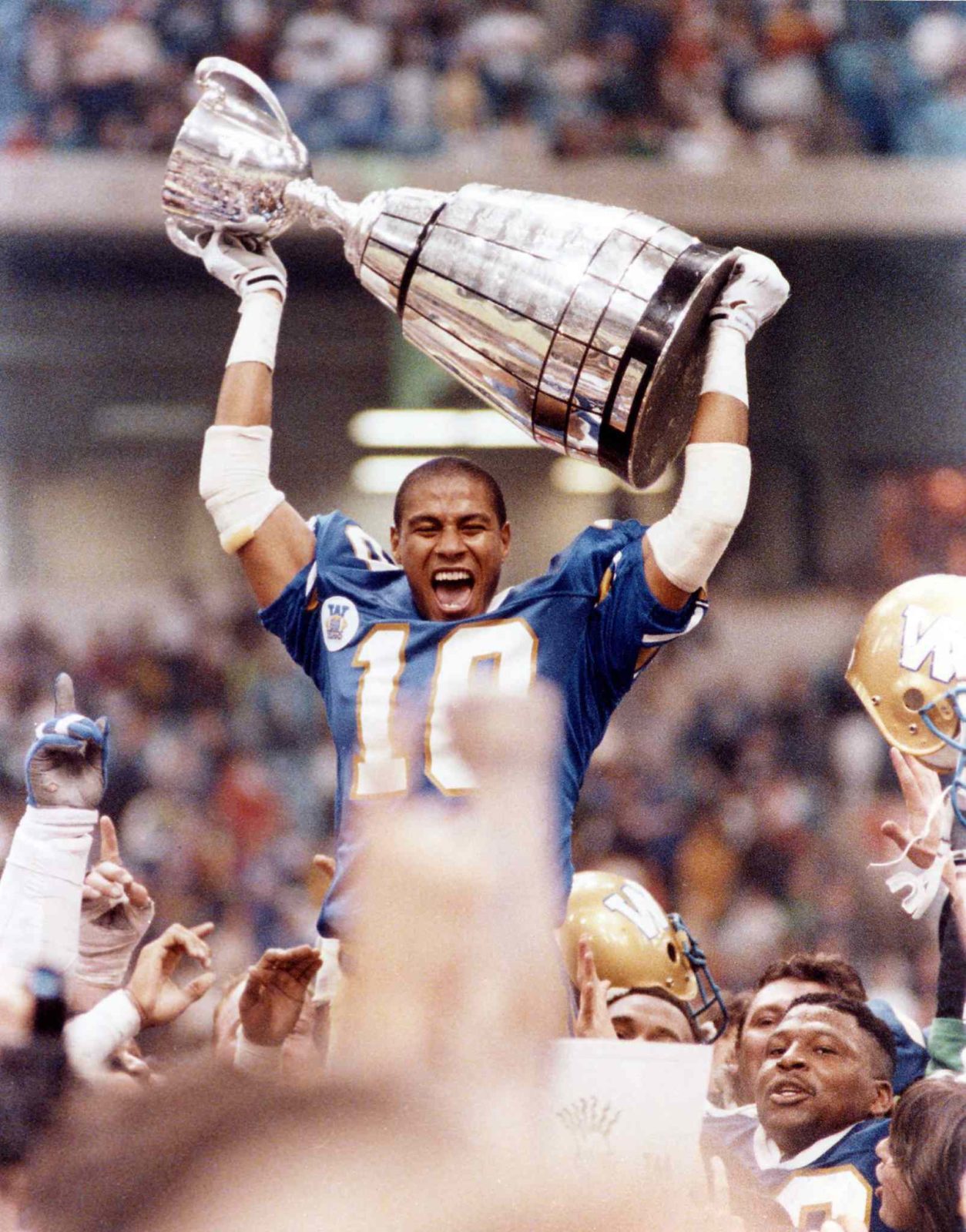 THE BACKGROUND: The Bombers and Edmonton Eskimos met in Winnipeg’s home opener and a rematch of the 1993 Grey Cup, won by the Esks. Winnipeg jumped out to an early lead, but with the Eskimos battling back, Dunigan remained in the game as his passing numbers kept spinning like the numbers on a slot machine. On a night in which both Alfred Jackson (308) and David Williams (240) broke the Bombers record for receiving yardage in a game – those totals still rank first and third – Dunigan smashed the CFL record for passing yards with a jaw-dropping 713. The old record? Try 601, a year earlier by Danny Barrett.

WHY IT IS STILL SO MEMORABLE: There have been so many sensational single-game individual efforts by the Bombers over the course of their 90 seasons. But this one, it says right here, was the absolute greatest. Consider this, for perspective: in the last 15 years there have been just five 500-yard passing games by CFL quarterbacks, with the highest total over that span a 511-yard effort by Mike Reilly.

THE BACKGROUND: You know how this turns out. The longest drought in franchise history ended with a memorable run through the playoffs that saw the Bombers win playoff games in Calgary and Regina before crushing the Ticats on Grey Cup Sunday. In so doing, the Bombers became the first third-place team to win the Grey Cup since the 2005 Eskimos and grabbed the 11th title – and one of the most significant – in franchise history.

WHY IT IS STILL SO MEMORABLE: It’s a result which is still resonating. And, given the long span between titles, excuse Bomber Nation if they don’t milk this a while longer.