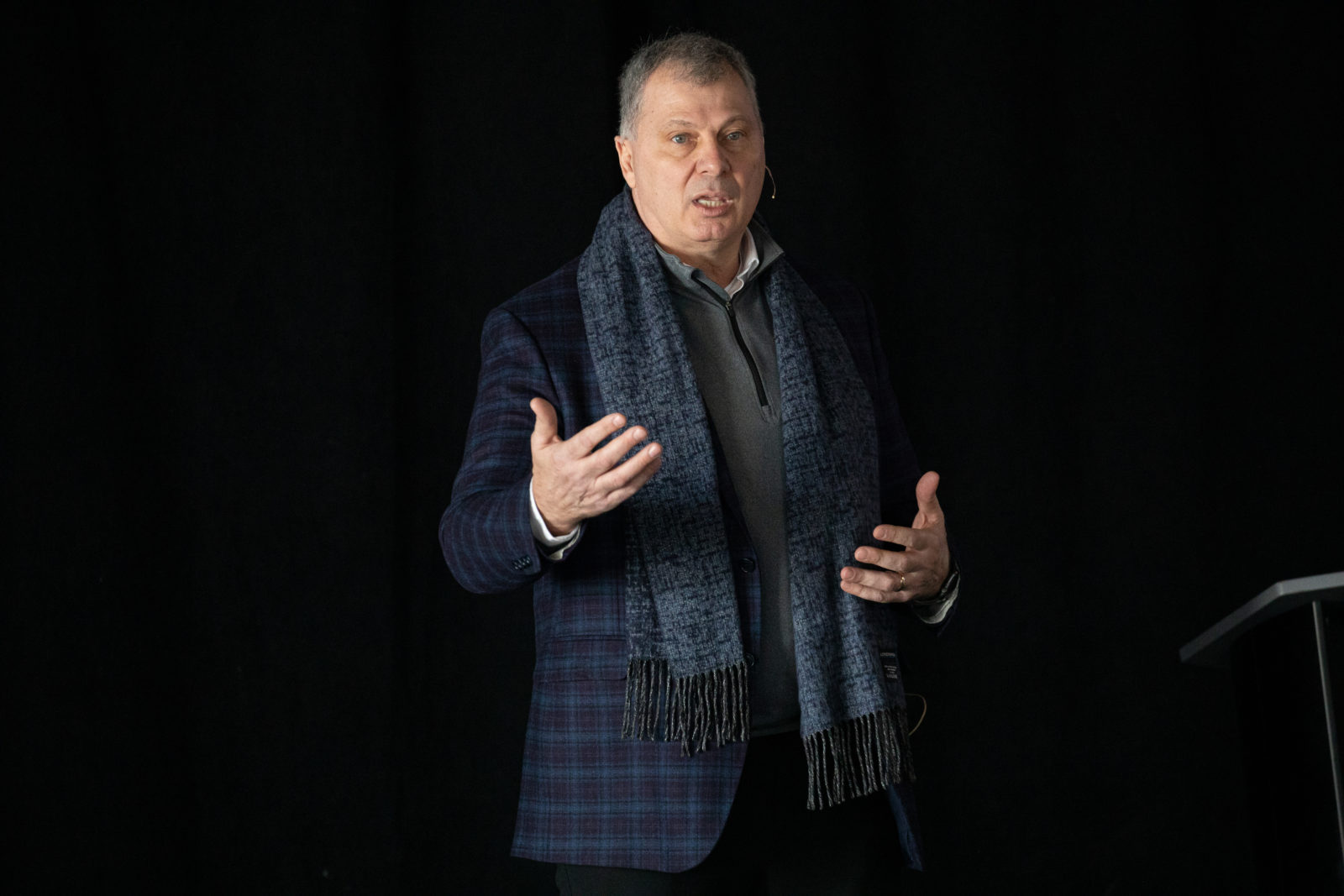 There have been critics and there most certainly have been cynics. But Randy Ambrosie will not stop dreaming big about growing the Canadian Football League across this country and beyond.

The CFL commissioner was in Winnipeg on Wednesday as part of his third annual coast-to-coast ‘Randy’s Road Trip’ allowing him to interact with all those who love and care for this league.

The CFL boss – a proud Winnipegger and University of Manitoba product – met with bluebombers.com for a wide-ranging 25-minute interview in between engagements that touched on a number of different subjects, the biggest being the league’s global CFL 2.0 strategy and a potential new playoff format – first floated by Blue Bombers President & CEO Wade Miller. 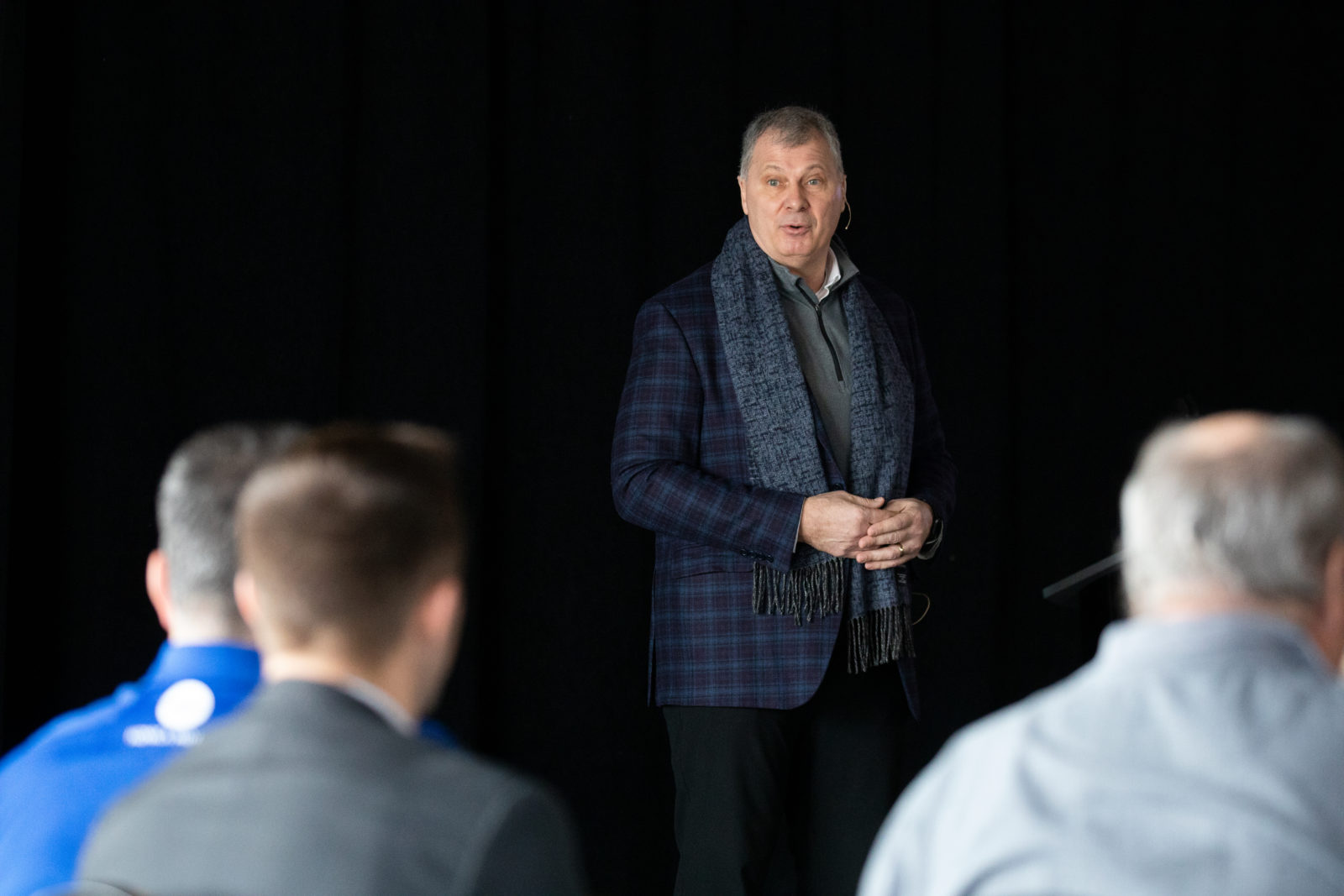 Here is a condensed version of that conversation:

BLUEBOMBERS.COM: You’ve been commissioner since 2017, let’s open with your sense of where this league is at right now…

AMBROSIE:  We’re at the beginning of a new beginning. Sometimes we suffer from being ‘too much Canadian’ in that we underestimate the power of our game and under appreciate how much it means to Canada. We are bigger than we give ourselves credit for and I think we can be bigger than we are today and there are lots of opportunities in front of us to do that and re-energize ourselves.

Then, there’s a bigger version of this league that I feel is on the horizon. It speaks to the 2.0 strategy, it speaks to a global audience and a far deeper penetration in the Canadian marketplace. It’s about how we invite all of Canada into our league and make our stadiums cathedrals for fans, whether they have been here for five months or five generations. We want them to all feel welcome and fall in love with our game and our players.

So, what’s the next biggest idea we can do? Let’s challenge ourselves. It’s like an athlete… you bench pressed ‘X’ yesterday. You don’t come to the gym thinking about bench-pressing ‘X’ again, you come thinking you want to ‘X’ plus some number. If you did 15 reps one day, you want to do 16 the next. That’s the way athletes are. I want our league to find the athlete in us.

BLUEBOMBERS.COM: I’d like to expand on something you began with… We were in Brandon recently with the Grey Cup and already there was talk from a few fans about the CFL merging with the XFL. That gets my back up a bit. This league has already out-lasted so many other leagues down south that were supposed to drive it out of business. I agree with your sentiment that we need to celebrate what we have with our league. OK…. My little rant aside, what are your thoughts on the XFL?

AMBROSIE:  They’ve played three weekends. A year ago it was the Alliance (of American Football). Maybe it’s this natural Canadian inferiority complex that is so endemic to who we are. It’s the thinking, ‘They’re doing it so it must be better.’ No, what we do is special and a bigger version of it will be even better. I think we have to shed that inferiority complex now. Everything we do from this point has to be better. 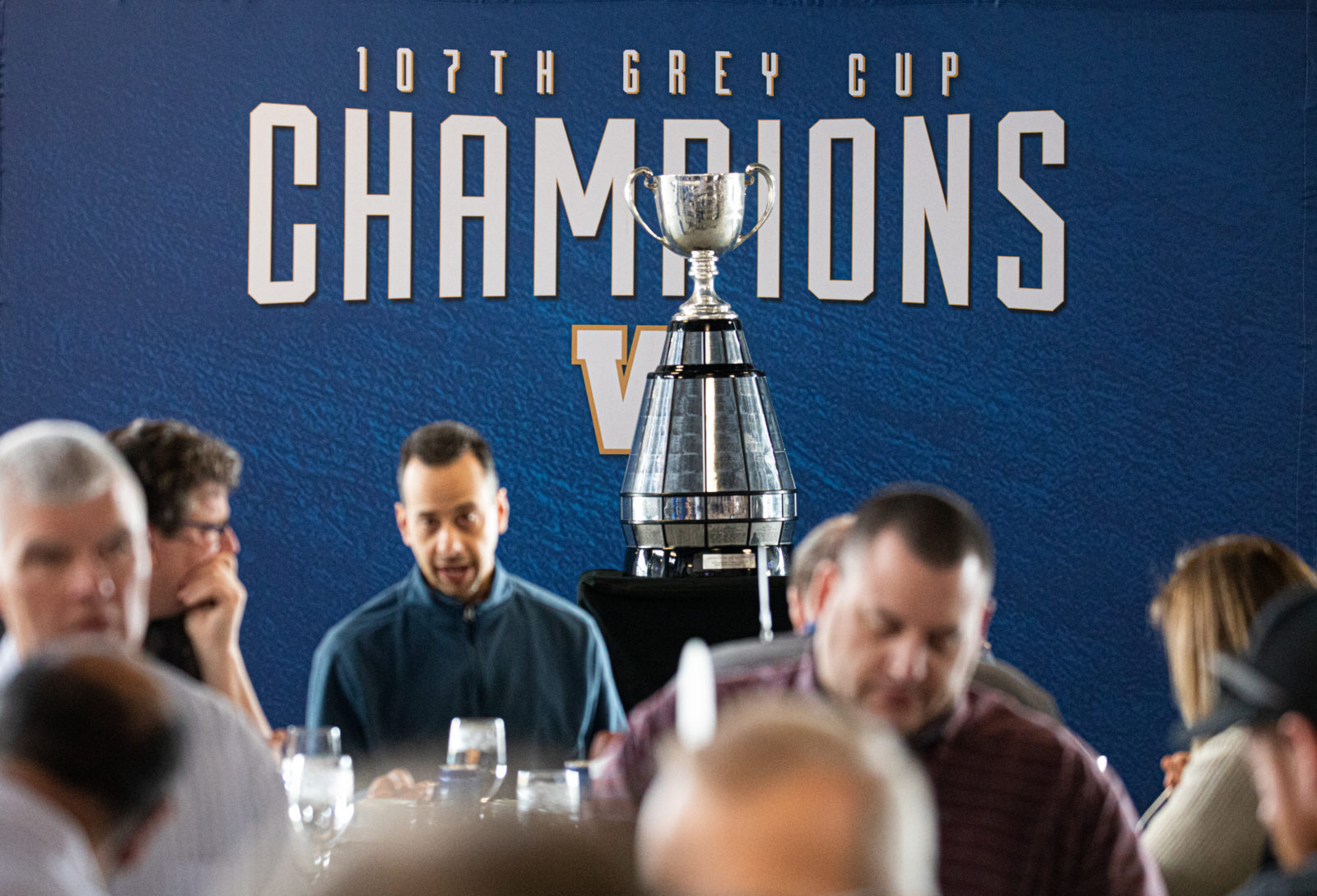 BLUEBOMBERS.COM: Let’s talk about the new playoff idea that would see the top two teams earn a playoff bye with then the third-place team facing the sixth-place team and four vs. five. There was also the twist that had the team with the best overall record then being able to choose who they would like to play in a division final. Where do things stand on that?

AMBROSIE: I do like it and I like it because it’s an interesting idea. We shouldn’t be afraid to talk about interesting ideas. We’re not going to do them all. Wade and I don’t know today if this is a path our governors will choose but, man, it’s so cool to have people talking about this idea across the country.

Most of the feedback has polished off that ‘Decision Day’ part of it where the team would choose its opponent. I don’t think that’s going to fly. You can still do it where the two division winners get a bye and then the team with the best record will play the lowest seeded team remaining in the divisional finals. But at the heart of Wade’s proposal is this will keep more teams in the playoff hunt longer.

BLUEBOMBERS.COM: What is the end game for the CFL 2.0 initiative and growing the game globally?

AMBROSIE: I don’t know if we can predict the ‘end game’, but think about the infinite possibilities. Go back to David Stern and the lesson of the NBA. There was a time in David Stern’s earliest days where they didn’t show their playoff games live on TV – they were tape-delayed. David used the global strategy to energize the league. They were the league that took their games to Japan way before other leagues were thinking about those things. He used the energy of a more global approach. He invited the world in, he invited players in, he invited Yao Ming into the NBA before other leagues were thinking of doing those things.

You don’t have to have a perfectly-defined end game, but what you can say is by using global to energize a league and become the epicentre of a football-playing world and be a leader in that community… all of those things can lead us to a much bigger place. Maybe we do have a true Global championship. This thing has unlimited potential. The 14 nations that make up our alliance today represent a population of 800 million. It boggles the mind. 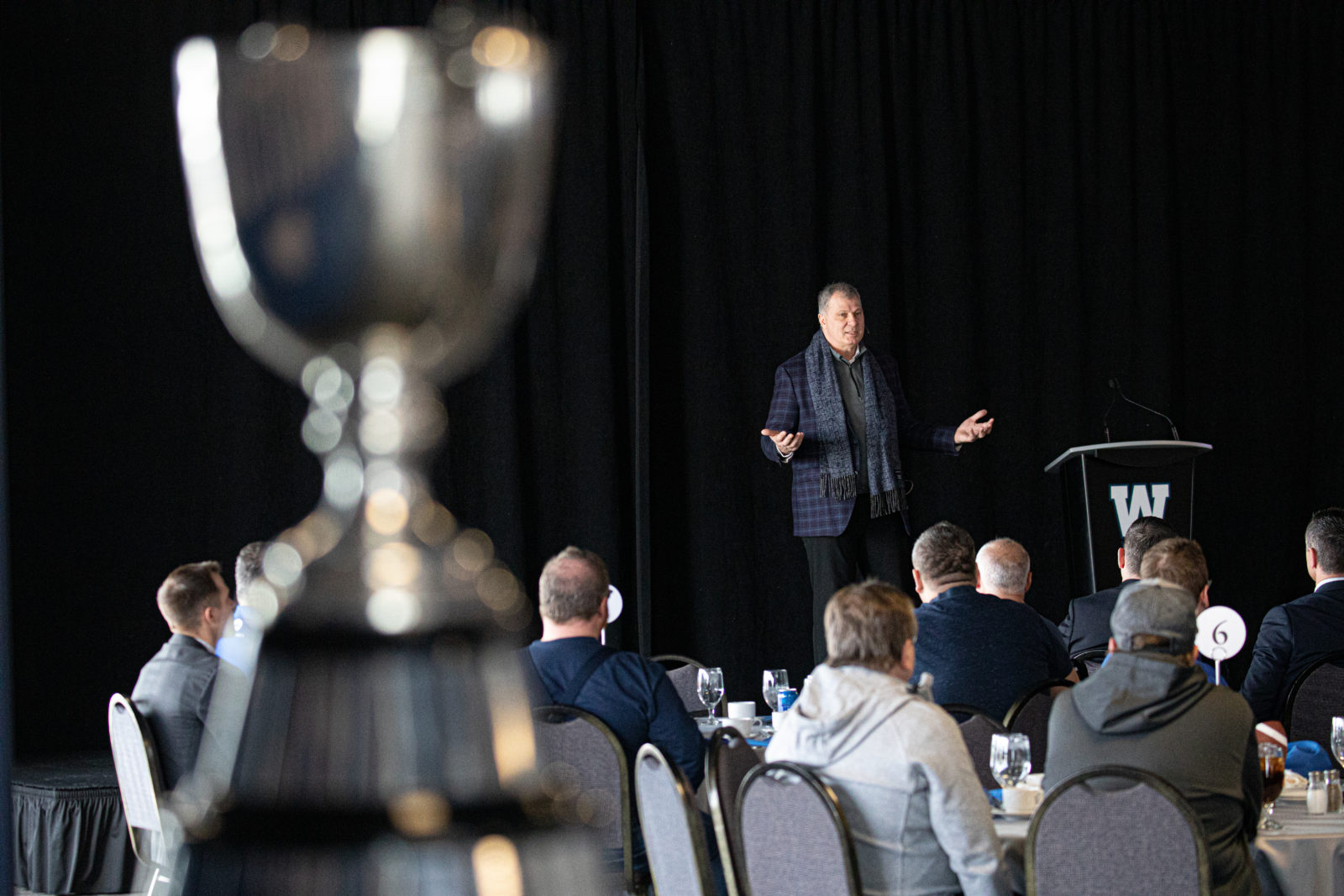 BLUEBOMBERS.COM: Have there been any financial benefits yet from the 2.0 initiative, whether it’s TV or corporate money?

AMBROSIE: We had two TV deals in Mexico last year. It will take time, but we are still discussing how to tap in to this global community. It’s complex and these things are not done as simply as you might think, but they are all being talked about.

This phase is going to be characterized by elevating the level of play and the level of players we get from our international partners. It also should be characterized by the number of opportunities we create for Canadian players to play around the world because a kid who loves this game shouldn’t have to give up playing football because they don’t end up playing in the CFL. There should be another path to follow.

BLUEBOMBERS.COM: There has been some criticism to this whole approach, though. What do you say to those who say you should be concentrating more on fixing in the issues here in Canada first than trying to grow the brand in places like Mexico, Europe or Japan?

Look at the Premier League in soccer, at what’s happened in the NBA and in the NHL… more than 30 percent of the players now are international. I would argue that in 1972 when Canada played Russia it changed hockey, it certainly help change the growth rate in hockey. In order to attract more fans we have to make our game more interesting and international is cool. I think it’s a way for us to network.

But I wonder about this… somehow it’s like everyone else can be global, yet we as a league shouldn’t be. We should be content with being small. There’s a contradiction from some – we want you to be bigger, but we want you to be the same. That’s not the way it works. The way things change is by being different. We have to find a way to be bigger.

I went to business school just over here (at the University of Manitoba) and I’m reminded of the four Ps of marketing: price, promotion, packaging and product. You have to re-energize the product from time to time. The good news is we’ve got great partners with the players association who do want us to grow this league. They know there’s a lot in this for the players.

But I think we could do a better job of explaining to people how all of these things are inter-connected and the idea of an international outreach has broad, national implications especially in our more international communities where we are competing against global leagues.

We have to break out of an old identity and we have to find a new one.