Fan Stories | What the Grey Cup Meant to Manitobans 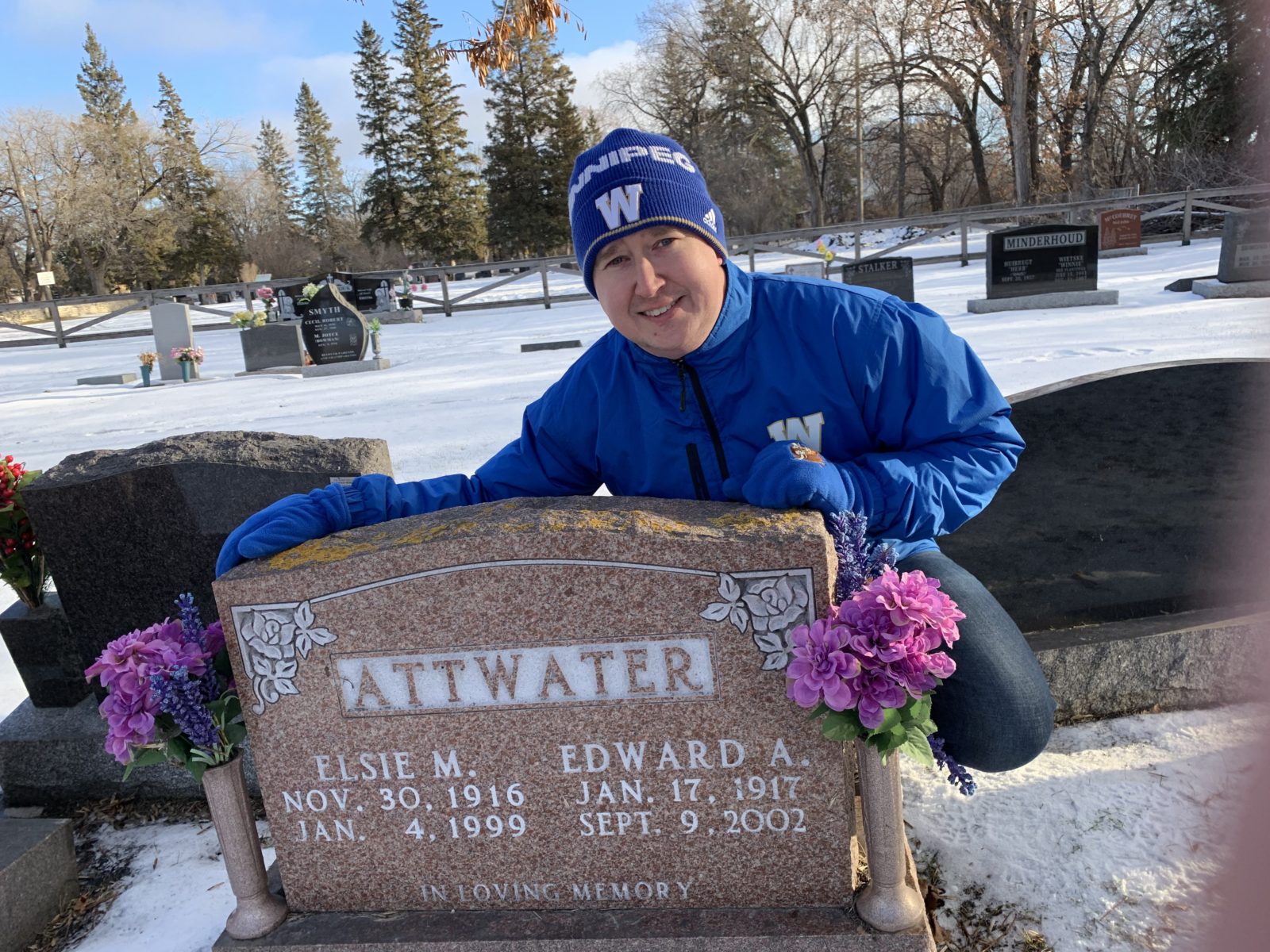 Fan Stories | What the Grey Cup Meant to Manitobans

The relationship between the Winnipeg Blue Bombers and their fan base has forever been complicated. That’s not unique to the Bombers by any means, but the reaction to the club’s Grey Cup victory has helped rekindle a love affair which for many had turned stale.

No doubt there are the diehards who are there with the team no matter what; for better, for worse, for richer, for poorer, in good times and in bad, in sickness and in health.

Yet, the Bombers victory over the Hamilton Tiger-Cats in the 107th Grey Cup, the championship parade, and the euphoria that still lingers has clearly brought more back on board. The shine is back on the club’s ‘W’ after a championship drought pushing three decades ended, with fans gobbling up Grey Cup merchandise at a record pace and the season ticket lines humming with business.

That’s the good financial news component to this story, but what is even more compelling is the human element and that complicated marriage between the Bombers and their fans.

We saw that on Grey Cup Sunday, with fans in attendance at McMahon Stadium in Calgary bursting into song and tears as the seconds ticked away. And we most certainly saw that in the warm embrace that was the parade two days later.

With all that in mind, bluebombers.com reached out to three fans to have them tell their Grey Cup-related story. No doubt there are hundreds – if not thousands – of tales similar to this, but gather round for the stories of Ron and Kaelee Courchaine, Neal Einarson, and Darrell Pomeranski… 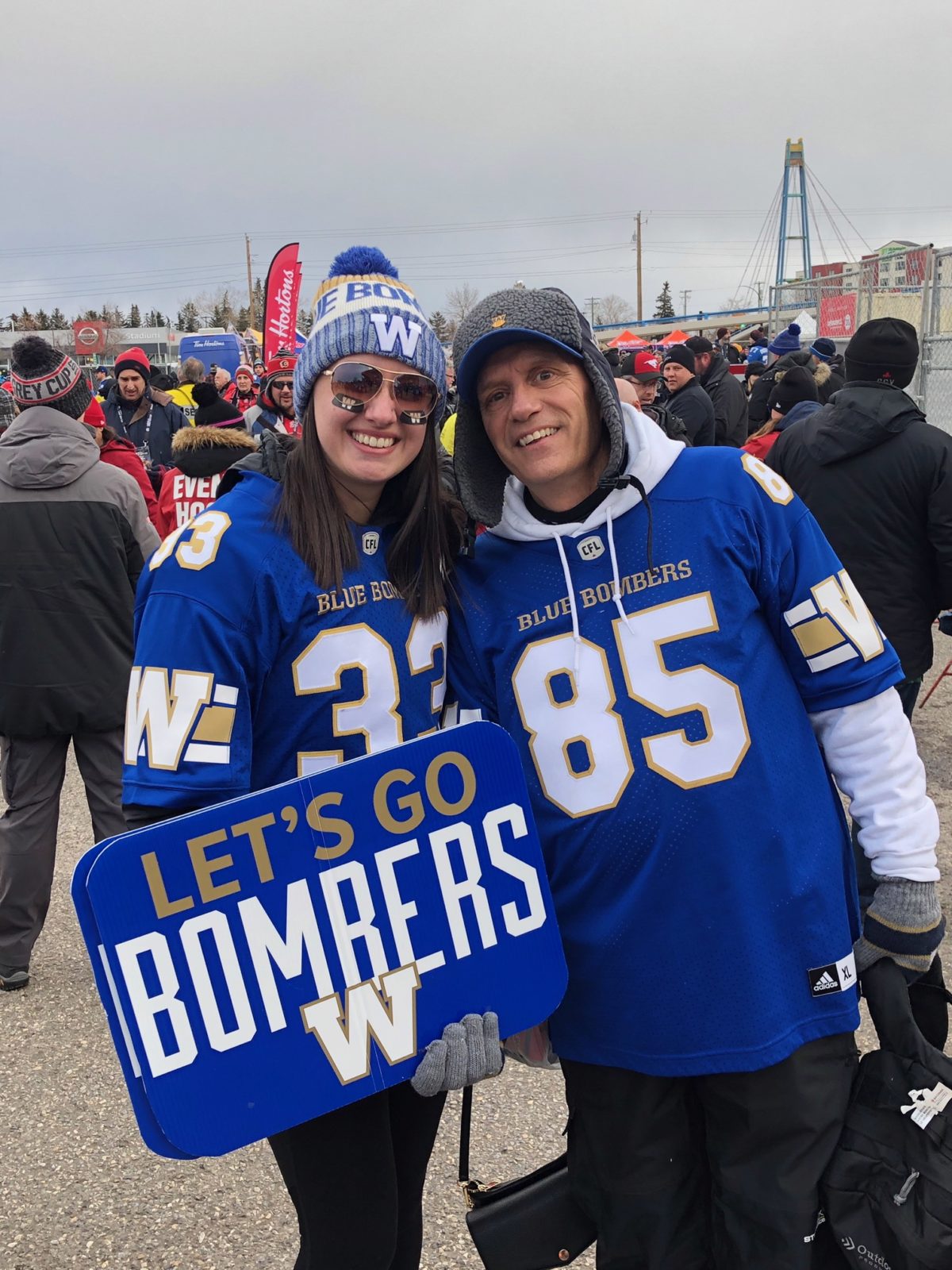 Ron Courchaine has a story to tell, and it’s ripped straight from the script of a James Bond movie.

The Courchaines – Ron and his wife Carole, son Taylor and daughter Kaelee – are Blue Bomber fanatics.

“I bleed blue and gold,” began Ron, a letter carrier for Canada Post. “We’ve got blue and gold lights up on the house through the whole playoff run. I’ve got the Canadian flag and the Bombers flag running all summer. We have a big 12×14 ‘For the W’ tarp in our back yard. So, I’m as true blue as you can get. I love, love, love this team.”

Ron and Kaelee had made plans to go to the Grey Cup dating back to booking a hotel room in Calgary in June and then purchased airline tickets after the Bombers’ win over the Saskatchewan Roughriders in the Western Final.

But Ron wanted, somehow, to do more.

“As a fan all we can do is buy tickets, show up at the game and cheer our team on,” he said. “But I started to think that there had to be something extra we could do. It dawned on me that I had a pin from the 1990 Grey Cup and our last win.

“I dug it out and I’ll admit I started to think about the Lucky Loonie from Team Canada and hockey at centre ice and thought maybe we could put it at the centre of the turf somehow and then get it back after the game.”

That idea was percolating in Courchaine’s brain when he and his daughter arrived in Calgary early Friday morning. Their plan was fluid, and as it turned out, unfolded perfectly.

They drove to McMahon Stadium and managed to not only get into the facility, but place their 1990 Bomber Grey Cup pin in the padding wrapped around the goalpost at one end of the field.

“We had waited for 40 minutes for an opportunity,” Courchaine explained. “We noticed that the security guards at that end would change off – one on, one off – and there was a point where both of them would have their backs to us. There were people all over the field like game day sponsors and other workers, all of them with field passes. There was also a guy hanging around in the end zone where I wanted to put the pin in the padding around the goalpost.

“The timing just happened to work out where the guy in the end zone went to talk to people on the sidelines and the security guards were changing. We ran down to the field and into the end zone, pretending to be taking pictures and I snuck my hand into the padding and stuck the pin in place.”

Fast-forward to the end of the game and the Courchaines, amid the celebration, managed to get the pin back via Nadia Daoudi – the girlfriend of Bombers linebacker Thomas Miles – who had a pass to be on the field during the Grey Cup presentations. 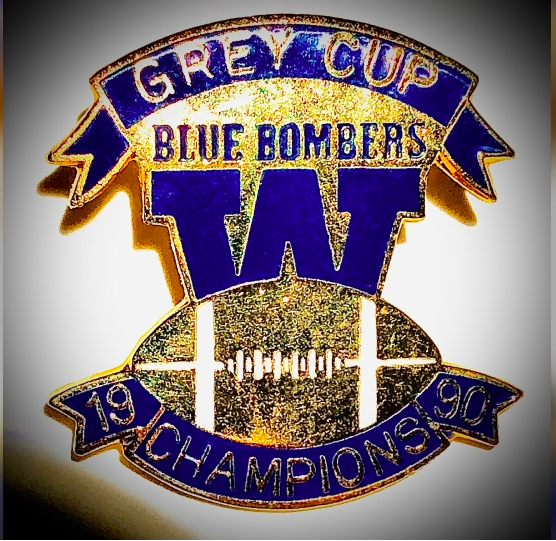 “It worked out,” said Courchaine. “I still don’t know how it did, from first getting into the stadium, then past security. We didn’t hop over any fences, we didn’t break anything. We just acted like we belonged.”

The perfect day was capped with Ron and Kaelee attending the Bombers post-Grey Cup event and both drinking from the Grey Cup with, of course, Chris Streveler pouring.

“This win… I feel like it’s totally energized people and the city,” said Courchaine. “When I was younger we won in ’84, in ’88 and ’90 – that’s three cups in six years. And it seemed like we won every home game back in the 80s. The next thing you know it’s 29 years without a championship, but now it’s finally done.

“This is for everyone. There are the diehards like us and to the bandwagon fans… jump on. We’ll make room. The more the love the Bombers get the better.” 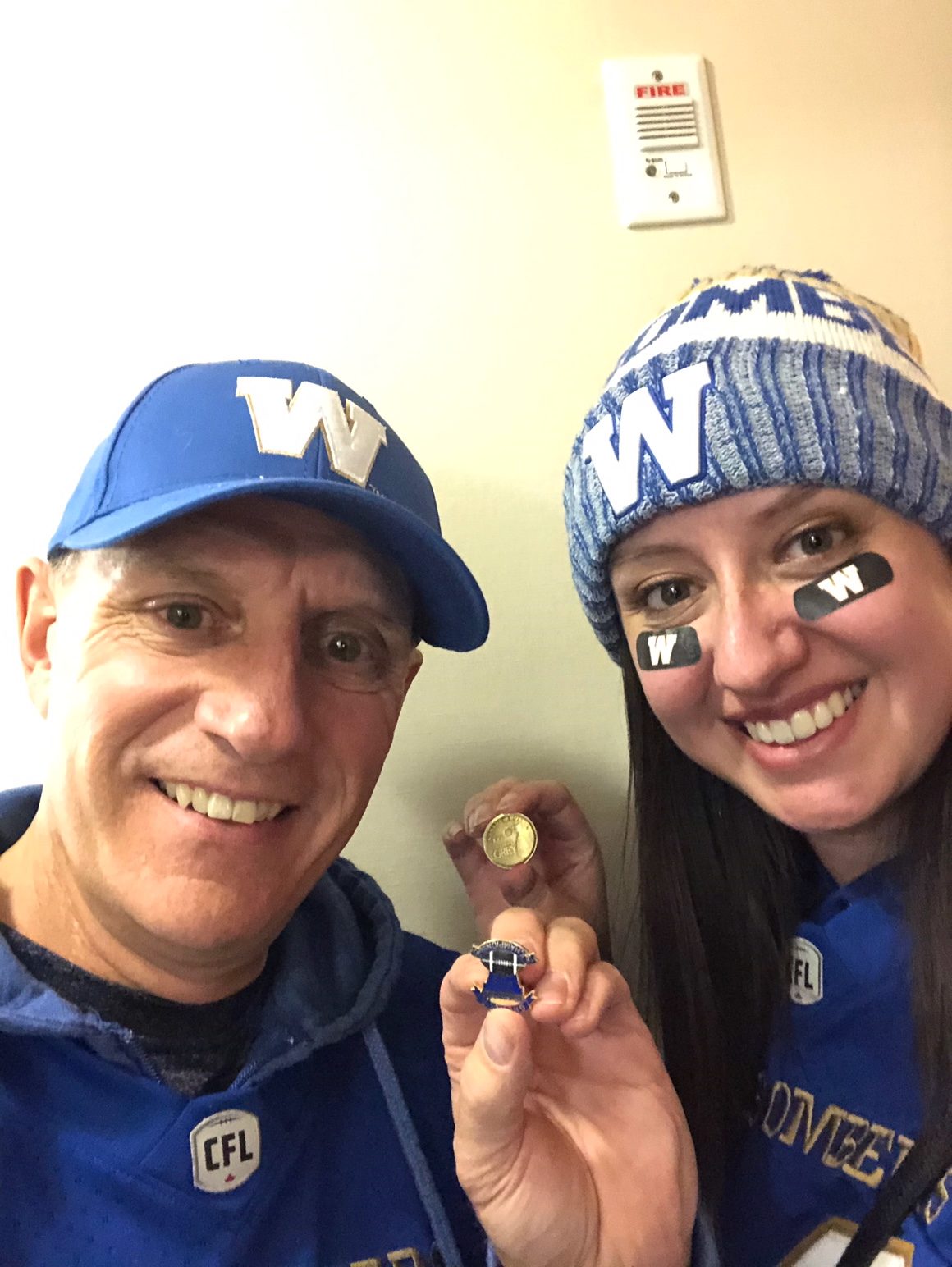 CLOSE TO THE HEART

Darrell ‘Pumper’ Pomarenski had big plans for Grey Cup Sunday. A few of his fellow Blue Bomber diehards were to gather at his house and he had designs on making a giant pot of his ‘soon-to-be-famous’ chili.

But, sometimes, life gets in the way of plans like that.

Pomarenski actually spent Grey Cup Sunday at St. Boniface Hospital. He had been in earlier to take care of some fluid build-up around his heart, but a negative reaction to the medication caused him to be extremely dehydrated. He was passed out on the floor when his wife arrived home to find him.

“It was a pretty scary ordeal,” Pomarenski explained. “Luckily my wife Dawn came home when she did and called 9-1-1 because when I was on the way to the hospital they said I had a blood sugar level of one, which can be fatal. It took awhile, but they nursed me back to health.”

Pomarenski has been a season ticket member since 1985 and remembers watching training camps as a kid at St. John’s Ravenscourt, Tec Voc and the old Velodrome. He’s also the kind of fan who would regularly take his lunch break from work at the stadium, just so he could watch the Bombers practice. Two of his three kids are out of province now – Kristin is in Quebec studying nursing; Trevor is in the military and living in Alberta – but he and his other daughter Kelsey are regularly together at every Bombers game.

But a near-death experience and a two-week hospital stay can take its toll. Pomarenski was sent home on December 4th, but with completely uplifted spirits after the Bombers’ Grey Cup win.

“I had my tablet with me, but there was a patient lounge with a fairly big screen so I watched the game there,” he explained. “I gotta admit it felt a little odd at times yelling so loud at the TV while in the hospital. I’ll just say they are amazing people there.

“It helped me so much that it’s unbelievable. I had guys messaging me like Jake Thomas, Jessse Briggs, Jackson Jeffcoat. My spirits were in the dumps with being ill, so being able to sit there and not think about it for three or four hours was special. Had they lost, I don’t know what the feeling would have been like but thankfully I don’t have to think about that.”

Eddie Attwater was a Blue Bombers diehard whose allegiance to the club dated back to the days of Fritz Hanson and later, Jack Jacobs – his two favourite players.
That passion for the football team lives on today in his grandson, Neal Einarson, and likely Eddie Einarson – Neal’s 2 ½-year-old son who was named after his great grandfather.

A couple of weeks ago, Neal undertook to fulfill a promise he made to his grandfather to give him a hug when the Bombers won the Grey Cup. That promise was made back in 2002, just hours before his grandfather passed away.

The last thing I promised my Grandpa was that after the Bombers win the Grey Cup, that I would come give him a big hug.

I sprinkled some rubber pebbles I got from the field at McMahon in his vase so he could share in the victory too.

“The last time I saw him I was visiting him on a Sunday in his nursing home,” Einarson said. “We always talked about the Bombers and it was back in 2002 then. If you remember, that was the year Khari (Jones) threw 46 touchdown passes, we had a stellar offence and we had just come off that disappointing Grey Cup performance the year before. So, it sure looked like we had a shot at going to the Cup again and I told him, ‘I’ll come back and see you when we win the Grey Cup.’

“Looking back, I think he knew that might be the last time I would see him – I had that feeling, too – and he did end up passing away just a few hours later.”

Einarson has kept his promise to his grandfather in a unique way. He was among the thousands of Bombers fans in the stands at McMahon Stadium on Grey Cup Sunday, but amid the celebration, was not able to get down to field level.

“I asked a security guard who was standing there trying to prevent people from getting on the field if he could pick up some of those rubber pebbles from the turf  for me. He looked at me weird and said no, but there was a cop about five yards away from him who heard me, got my attention and said, ‘Did you just say you wanted some of the little pebbles?’ He walked over and grabbed some and then came back to me. I gave him a quick story about what I was going to do with them and he looked very happy about it.” 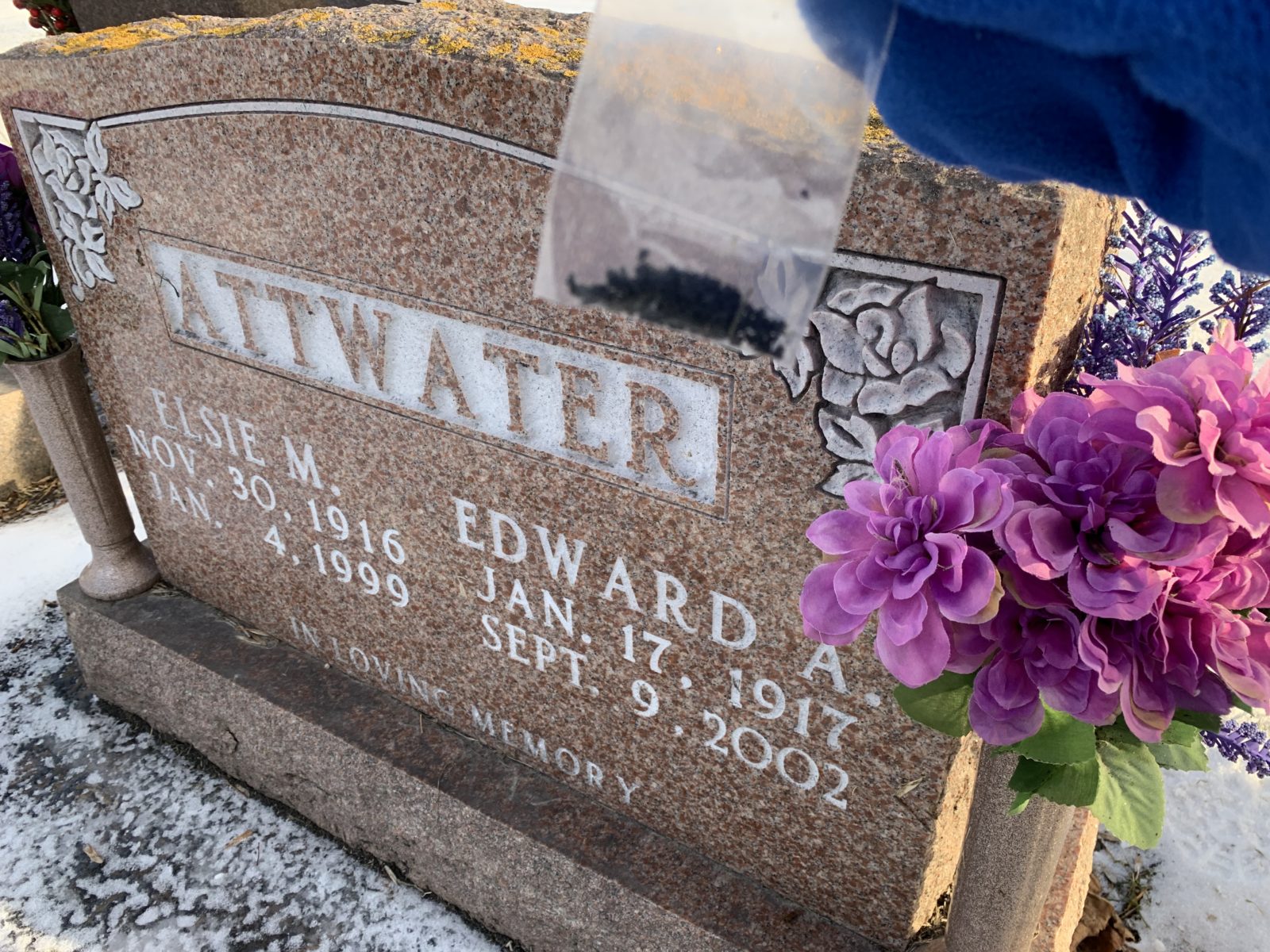 Einarson placed those pebbles in a bag and then, upon returning home to Winnipeg, sprinkled them into a vase of flowers that stands beside his grandfather’s tombstone.

“That replaces the hug I promised him,” said Einarson. “He was the first person I thought of when we won. I looked around and everybody was crying. Everybody. Everyone was hugging and everyone was crazy.

“Grandpa had loved the Bombers ever since their days at Osborne Stadium. I have season tickets in the front row of the upper deck and can reach down and touch the Fritz Hanson sign. Every game I give that a little tap for him.

“Now it’s my turn to say this is my favourite team because it broke a long drought.”