“This is perfect weather” | Bombers Embracing the Snow 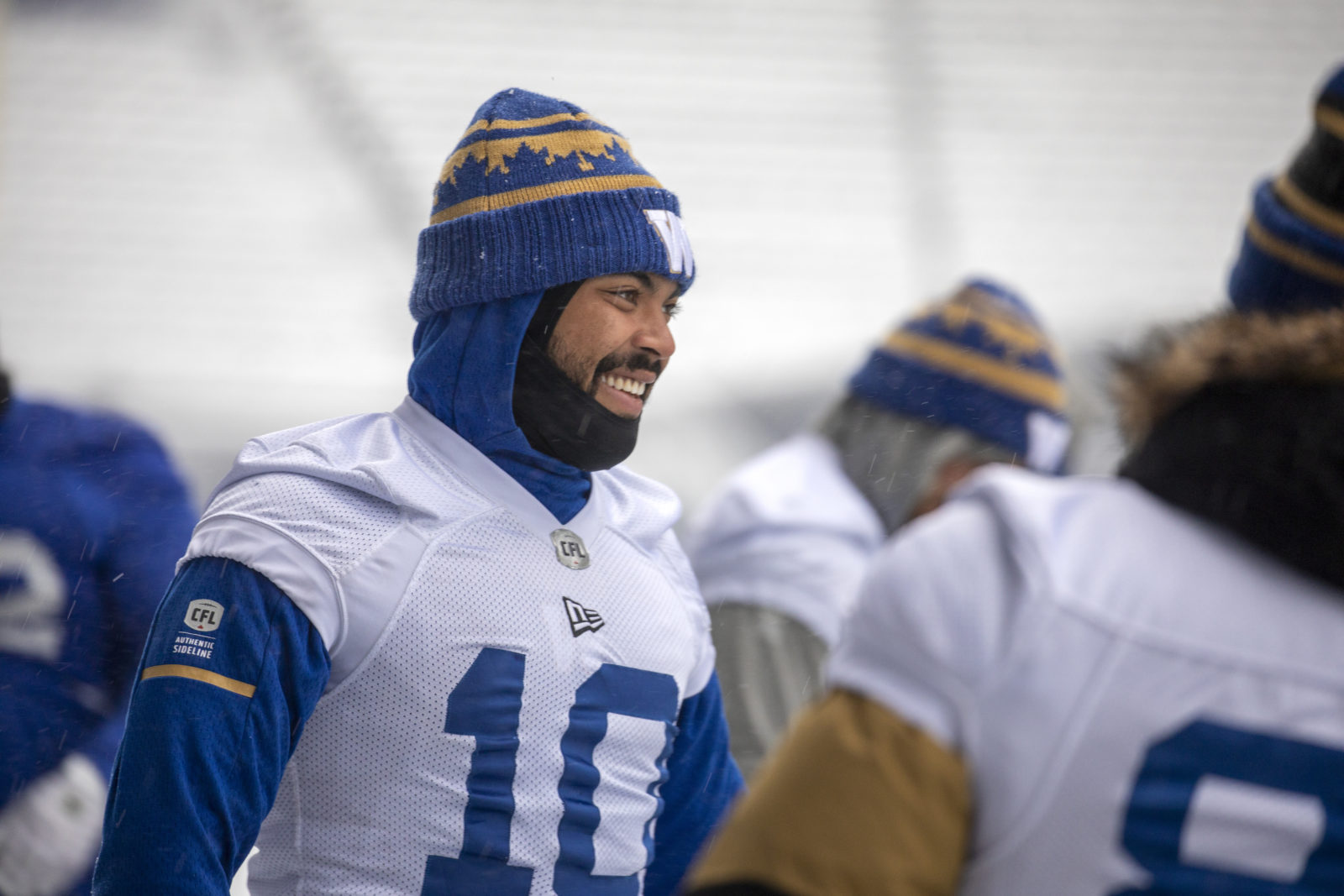 “This is perfect weather” | Bombers Embracing the Snow

Nic Demski knew the questions were coming, both from those inside the Winnipeg Blue Bombers locker room and inquiring minds from outside.

He is, after all, one of the local guys on this team – along with Andrew Harris, Geoff Gray, Thomas Miles and Brady Oliveira – and whenever the snow falls, or the mercury dips, or the wind howls, or the heat gets turned up, the Winnipeg guys are asked about it.

And so it went for Demski on Friday, not long after the Bombers had finished their walk-through in advance of Saturday’s home date at IG Field against the Montreal Alouettes at the same time this city cursed a pre-Thanksgiving winter storm.

Asked how many times he had questions thrown at him on Friday that began with ‘What the…?’ from his teammates, the University of Manitoba product grinned.

“A bunch… and probably from every one of them that lives south of the border,” said Demski with a chuckle. “There’s even a couple of guys from Quebec who are coming up to me and saying, ‘Really? This early?’ It is what it is. It’s Winnipeg. It’s the most unpredictable city for weather to me and I’m from here.”

FYI, while Winnipeg was in the middle of a winter storm warning on Friday, Saturday’s forecast calls for a mix of sun and cloud, a few flurries in the morning with a north wind at 20 km/h and a high of +2. The crews and staff at IG Field will also be working feverishly to have the field and the stands good to go by kickoff at 3:00 p.m. 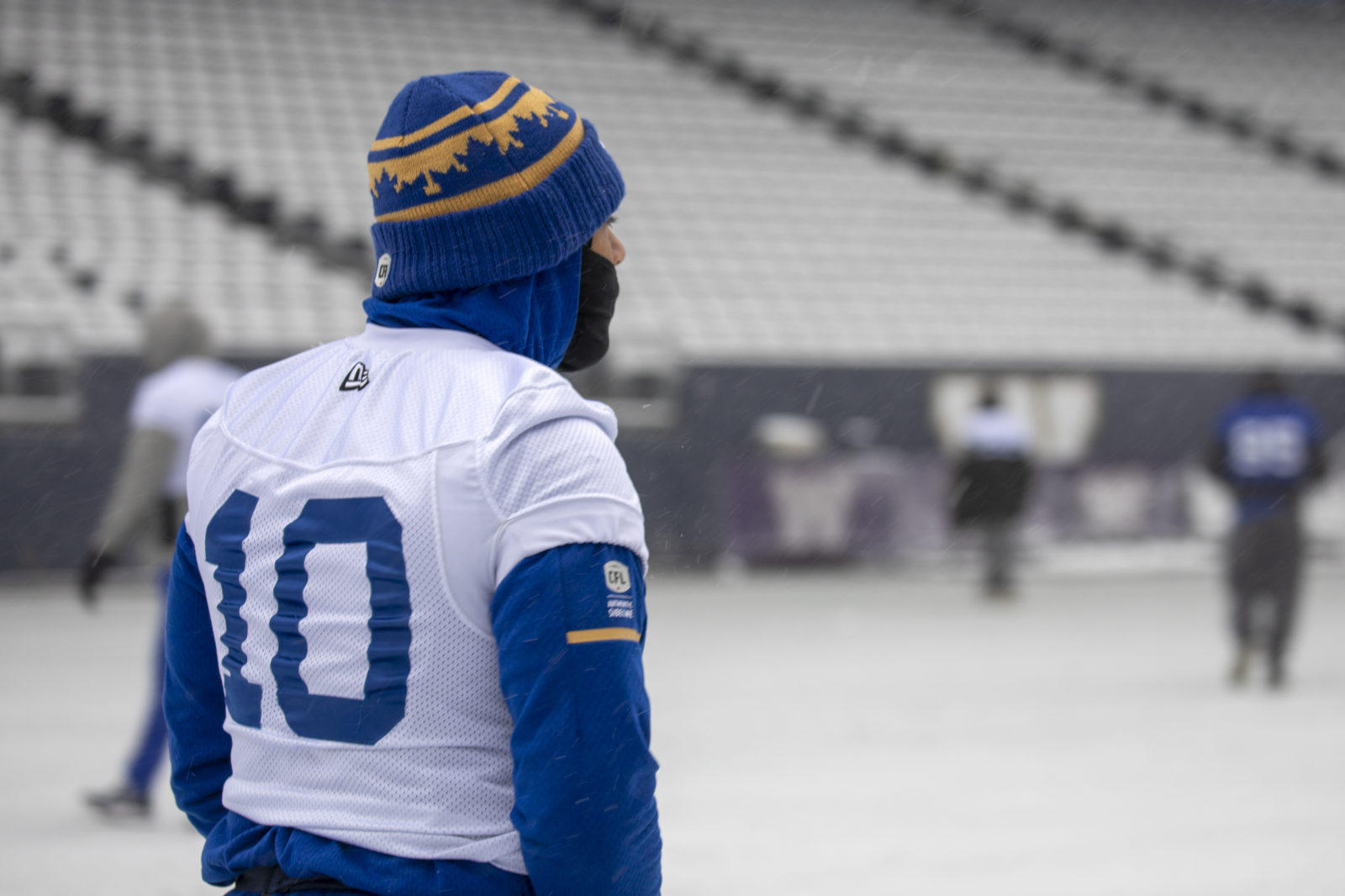 “So much of this is definitely mental,” said Demski. “You’ve got to dress accordingly and not try to be a hero. I came out with no sleeves yesterday but went in and came back out with sleeves on and I felt a lot better. You’ve just got to prepare for it mentally and physically.

Now, while many of the Bombers might be new to all this, several have been here, done that. Brandon Alexander referenced the Bombers’ regular season finale in Calgary in 2017 as the coldest game he’s played in – won 23-5 by Winnipeg – while others pointed to last year’s West Semi-Final win in Regina as the nastiest conditions.

And for kicker Justin Medlock, it was the 2011 East Final here in Winnipeg when he came into town with the Hamilton Tiger-Cats and exited old Canad Inns Stadium after a 19-3 loss.

Interestingly, Medlock spent his Friday morning – before heading out to the walk-through – studying game film of other CFL foul-weather games.

“I always try to watch the bad weather games or some of the games I played at certain stadiums just to see how I played it or how I went into it just to get a visual reminder. I just watched the game of Winnipeg-Calgary, 2014 in Calgary (a Bombers’ 18-13 victory) and I just watched Ottawa-Edmonton (2016) East Final in Ottawa and was just looking at the returns and them slipping around a little bit. You need to make sure you hit some good balls and trust your guys.

“It’s one kick at a time. That’s my biggest thing when you get to this playoff weather.” 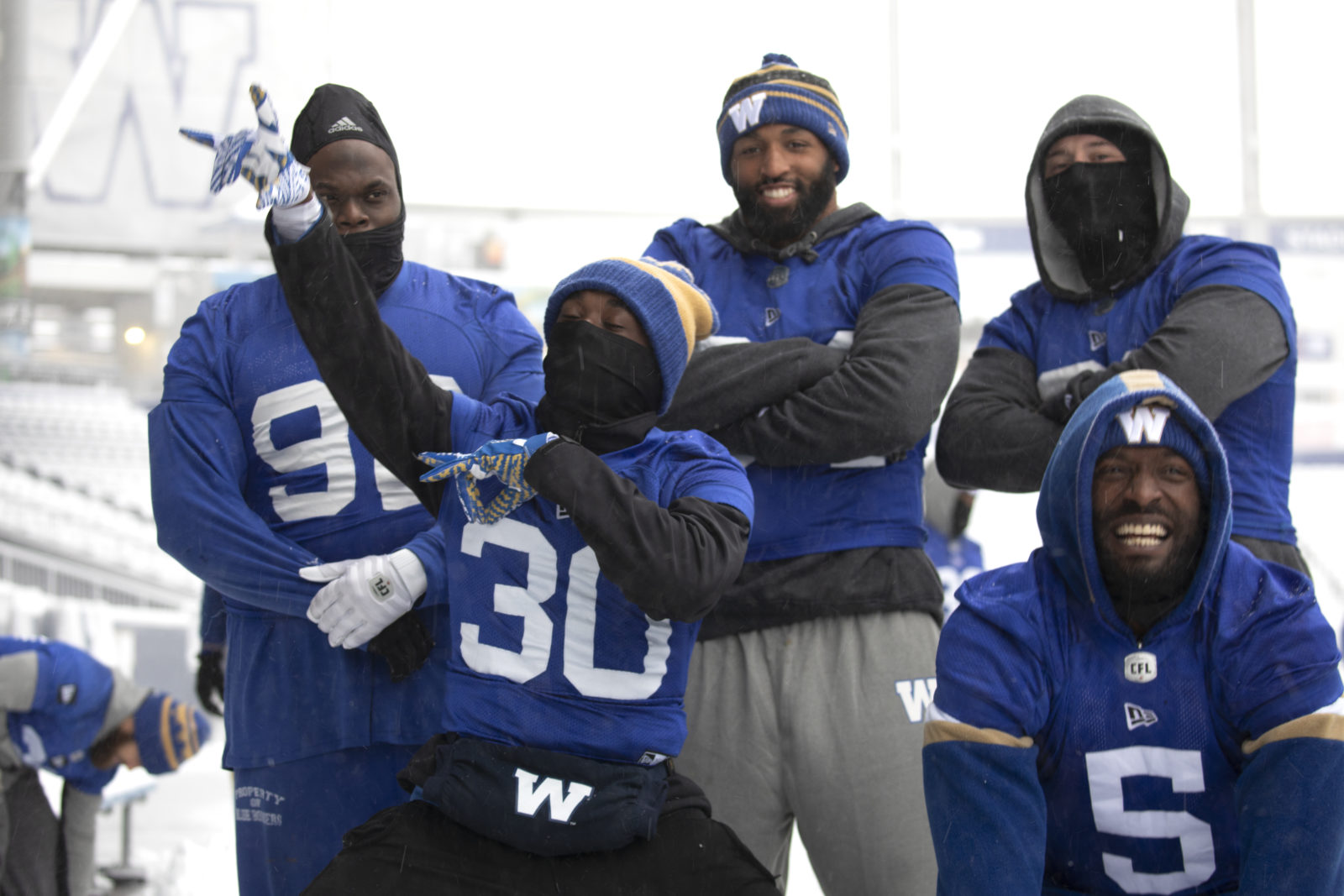 Chris Streveler spoke to the media on Friday after practice, and naturally, was asked a series of questions about the arrival of new QB Zach Collaros and how that might impact him.

“I found out about (the trade) straight from Osh (Mike O’Shea),” said Streveler. “He came and told me right away. At this point in the season it’s all hands on deck to make this push to the postseason. Obviously he’s someone who is a veteran has been around this league for some time and anything he can bring to the room and help this team I’m excited for. It’s about winning, it’s about being a team and however that plays out, I want to win. That’s what is important to me. We’ve got to make this push here.”

Streveler, who shares the same agent as Collaros, indicated the two spoke briefly on Thursday as the new pivot began his crash course on Winnipeg’s offence.

“He got in yesterday around 3 o’clock and I think he went right in to meet with (QB coach) Buck (Pierce),” said Streveler. “It was a handshake and a greeting. He actually texted me a couple hours after the trade went down. It was like, ‘Hey man, I’m excited to be with you guys. Whatever I can do to help moving forward I’m excited to do that.’

“We have the same agent and he called me and said he’s a great guy and I’ve heard nothing but great things. He’s a good veteran and I’m excited to have another good guy in our locker room. From everything I’ve heard and the interactions we’ve had I think he’s going to be a great addition to our locker room and he’ll continue to bring some good leadership to this team.” 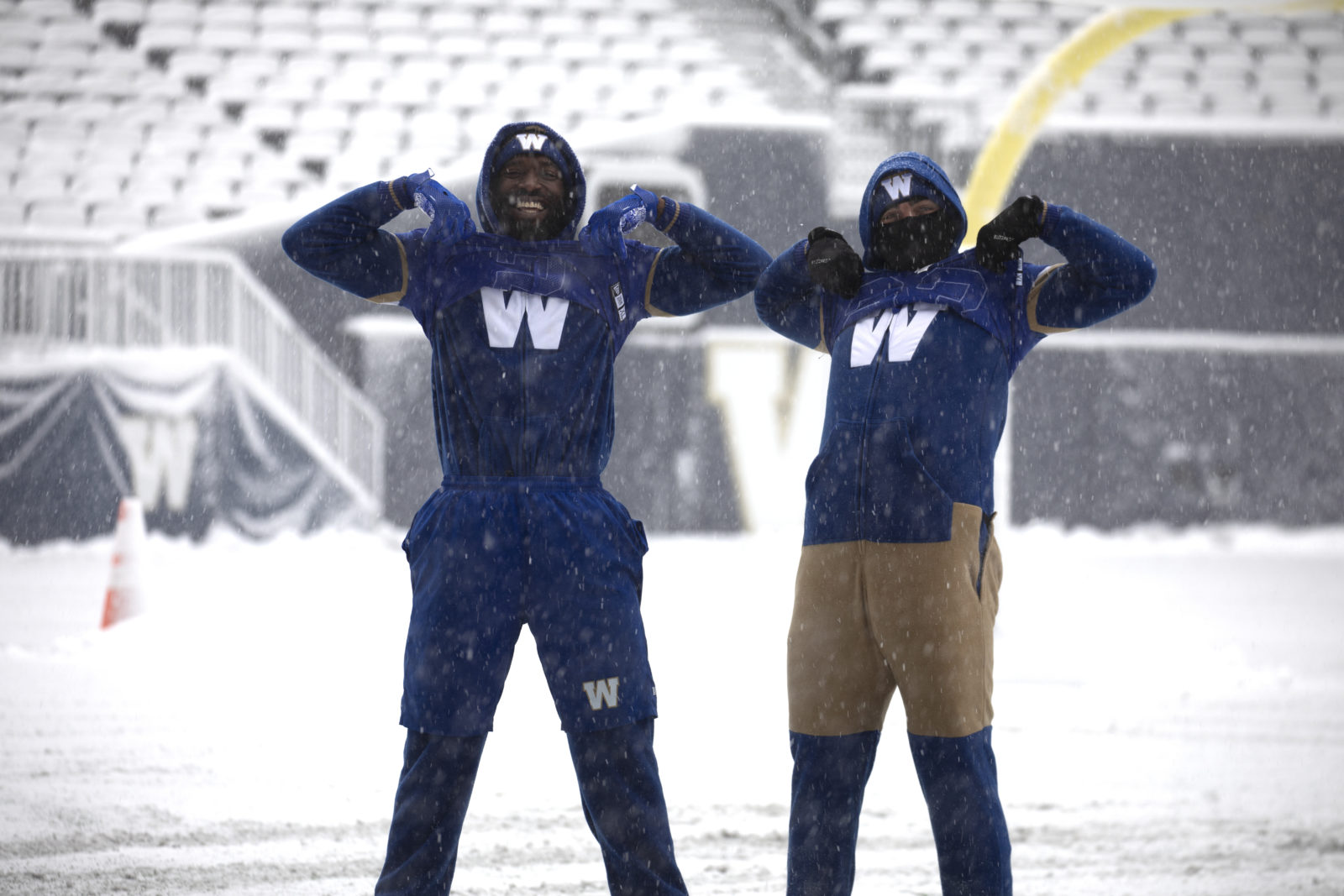 Streveler was also asked if the comments by O’Shea this week – who stressed this is ‘Streveler’s team’ – offered a boost of confidence to him.

“I don’t know if I need the boost in confidence,” he said. “It’s more about… when you bring somebody in and him saying that I guess it’s good and I’m going to be starting this week. But it’s really important having those conversations with my teammates this week. That’s what probably gives me more confidence than anything because at the end of the day those are the guys I’m out there fighting with and those are the guys I’m in the locker room with every single day.

“Hearing that those guys believe in me and believe in the direction we’re heading as a team means more to me than anything.”

Another from Streveler, who was asked by veteran Montreal Gazette football writer Herb Zurkowsky about being a feel-good story last year and what the difference is this year in terms of his stats and won-lost record with him at the controls.

“A couple of plays here and there, probably,” said Streveler. “We’ve been in some really, really close games and then a couple of games we just haven’t executed.

“To be blunt with you, I don’t really care if I’m a feel-good story or not. I just want to win and I’m willing to do whatever it takes and this team is willing to do whatever it takes to win. That starts this week. We don’t care what’s happened in previous weeks, we care about the challenge we have this week and are worried about the task at hand. 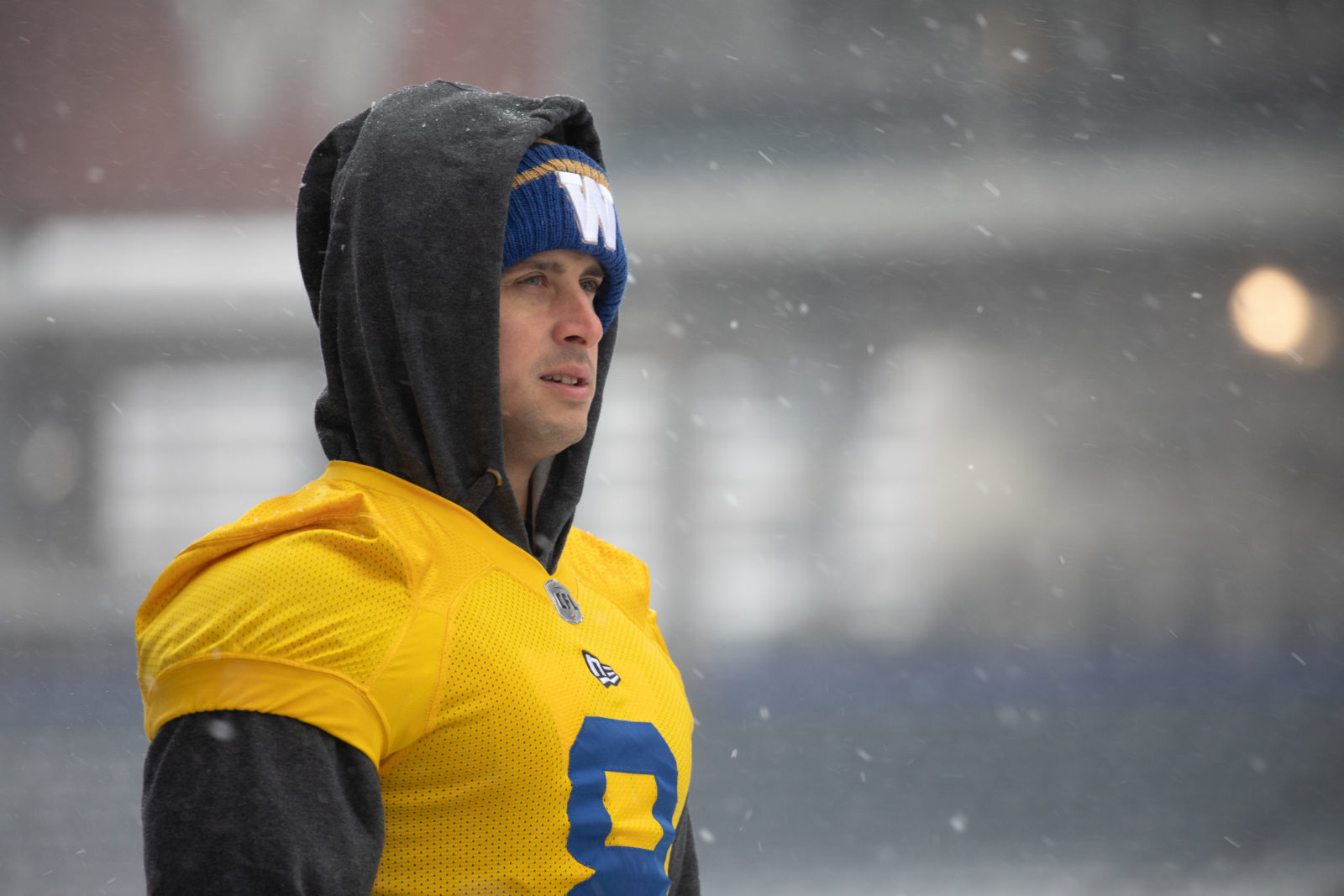 Bombers head coach Mike O’Shea said Collaros was to undergo a medical from the training staff here while diving into the playbook to get up to speed ASAP. Collaros, FYI, will likely do his first media interviews in Winnipeg next week.

First, from Streveler on whether these kind of conditions suit his game:

“It suits our team as a whole. It’s kind of a mindset. You can let this cold bring you down or say, ‘Ahh, it’s snowing’ or whatever. But we’ve had great energy this week at practice, even at walk-through (on Friday). Guys are running around, guys are excited, guys are excited to be out there and they want to play football.

“Osh has done a great job this week of reminding us all that this is how it’s going to be moving forward for the rest of the season. This is what postseason weather is like and we’re embracing it as much as we can.”

And, from Brandon Alexander:

“We were excited to go out there. If you would have seen us at walk-through today we were just out there having fun, throwing snowballs and all kinds of stuff. We were just enjoying ourselves and enjoying each other’s company while getting ourselves ready for the game mentally. We practise here. We’ve been in this type of weather for how many years now… we already know what to expect.”