“We’ve been looking for a veteran quarterback for a while” 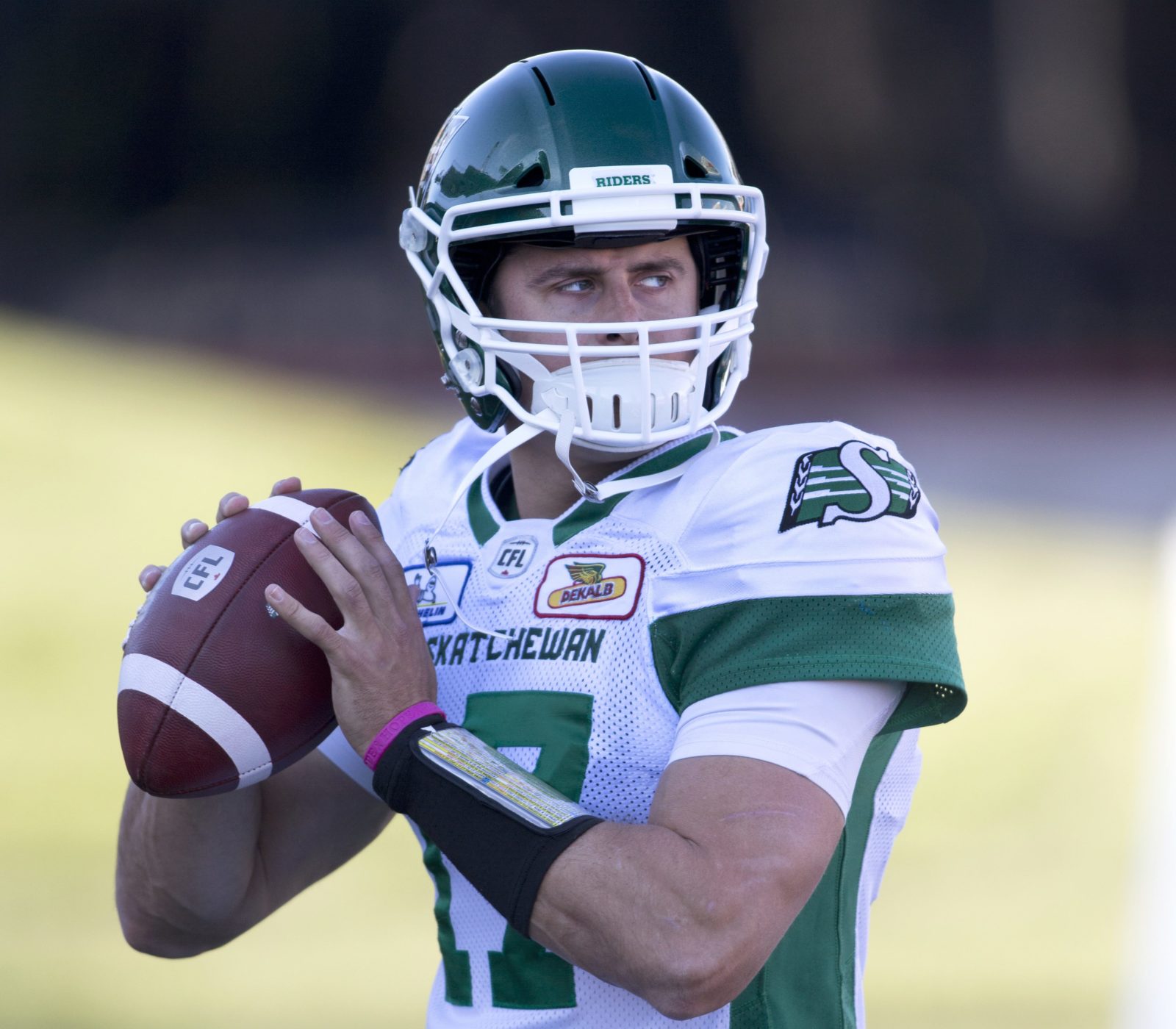 “We’ve been looking for a veteran quarterback for a while”

Zach Collaros comes with some much-coveted experience, a career winning record, and yes, some nagging injury questions that still need to be answered.

But the Winnipeg Blue Bombers are clearly willing to take on that risk, having dealt with the Toronto Argonauts for the veteran quarterback just minutes before the Canadian Football League trade deadline Wednesday afternoon.

The trade sees Collaros and a fifth-round pick in the 2020 CFL Draft coming West to the Bombers in exchange for a third-round pick going to Toronto next year. Should Collaros re-sign with Winnipeg in the offseason – FYI, he did have an agreement in principle on a contract extension with former Argos GM Jim Popp to return to Toronto that was never officially signed – the Bombers would also surrender their first-round pick next year.

Interestingly, Collaros, Chris Streveler and Matt Nichols are all scheduled to become free agents next February, but this was a deal clearly consummated with the next few weeks in mind, not the next few months.

“We’ve been looking for a veteran quarterback for a while,” said Bombers GM Kyle Walters in a conference call early Wednesday evening. “Since Matty went down we’ve been kicking the tires on some veteran guys and we wanted to bring in a veteran guy that had some experience.

“Zach was a guy on our list that up until yesterday, wasn’t available. We wouldn’t have made a trade for another quarterback – there was zero talks with any other team, to be honest with you. There wasn’t a lot of talk at all today.” 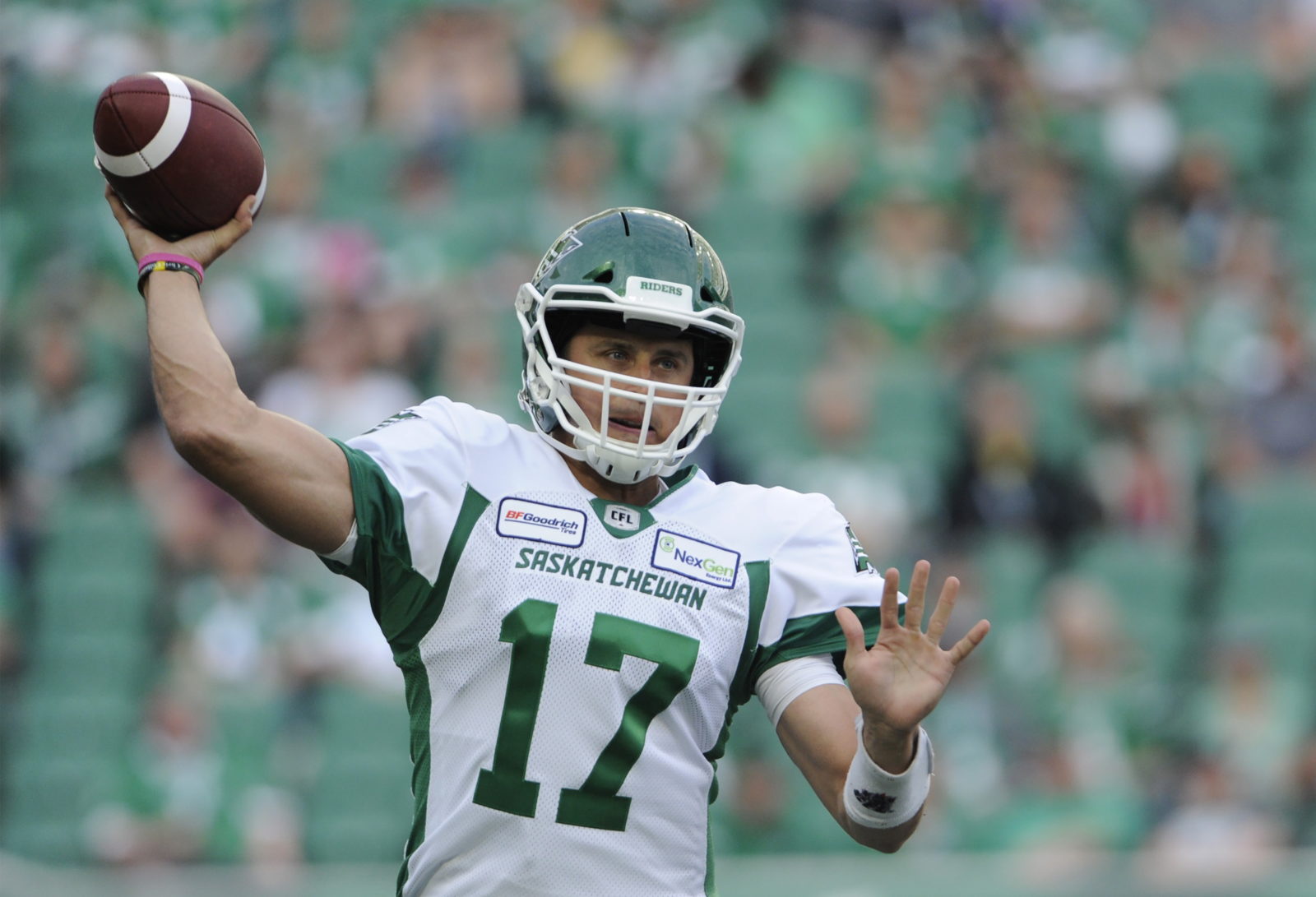 The idea of the Collaros trade, it’s worth noting, only began to gain steam only after Popp had been relieved of his duties in Toronto on Tuesday and the Bombers began negotiating with Argos’ Director of Player Personnel, John Murphy.

It also came after several weeks of the Bombers speaking to other veteran QBs about coming out of retirement to play – four, in total, including Kevin Glenn and Drew Willy.

The move comes in the midst of a three-game losing streak for the Bombers and three days in advance of Saturday’s game against the Montreal Alouettes. It also comes with the club still very much showing its support over the last few days for Streveler, who has guided the Bombers to a 2-4 record since the season-ending shoulder surgery to Matt Nichols in mid-August.

Bombers management is also very keen on Sean McGuire, the rookie pivot from Western Illinois who impressed enough during training camp and the preseason to see them move on from Bryan Bennett, last year’s No. 3 QB.

What the addition of Collaros does is give the Bombers a veteran presence in the QB room and potentially on the field for the playoff push. Winnipeg has secured a playoff spot, but has slipped to third in the West Division at 9-6, two points behind the Saskatchewan Roughriders, 10-4, and tied with the Calgary Stampeders who, at 9-5, are in second place because they have played one fewer game. The Bombers are up 1-0 in their three-game season series with the Stamps, with an all-important doubleheader with Calgary coming on October 19th and 25th. 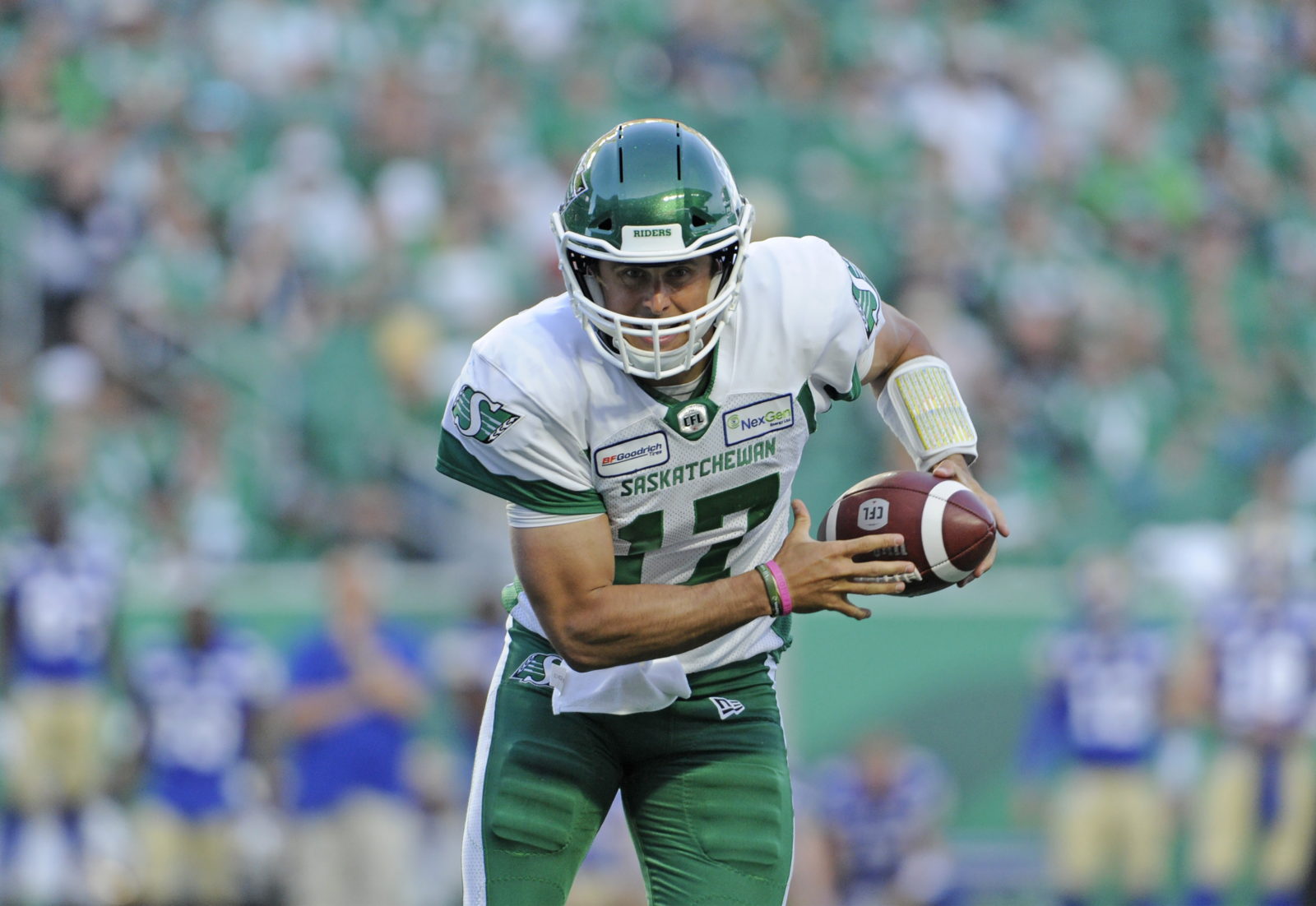 Asked what he brings to the Bombers, Walters – who had pursued Collaros in free agency back in 2014 – offered this:

“Most importantly, it’s veteran leadership, a guy who has played in the Grey Cup and had some success in this league. When we sat in here and discussed the quarterbacks it was pretty important that if we do bring somebody in we did want him to have some CFL experience.

“To have somebody like Zach, who has some wins in this league and had some success, it was important for the organization that if we were to bring somebody in it was somebody we felt comfortable with meeting those parameters.”

Collaros, 31, is 34-31 as a starter in the CFL with the Argonauts, Hamilton Tiger-Cats and Roughriders. He was 10-4 as a starter with the Riders in 2018, a season in which he threw for 2,999 yards with nine touchdowns and 13 interceptions while rushing 24 times for 103 yards, but did not play in last fall’s West Semi-Final loss to the Bombers.

A native of Steubenville, OH, Collaros was first signed by the Argos in 2012 after an outstanding college career at Cincinnati, where he appeared in 41 games for the Bearcats, including 25 starts. He spent the 2012 and 2013 seasons with the Argos – going 5-3 as a starter in ’13 – before signing with the Tiger-Cats as a free agent in 2014.

Hamilton went 16-9 in games Collaros started in 2015-16, and he had his best season as a pro in 2015 when he was a Most Outstanding Player candidate before a season-ending knee injury. That year Collaros threw for 3,376 yards with 25 touchdowns and eight interceptions while appearing in just 12 games. He had 2,938 yards passing and a touchdown-to-interception ratio of 18:8 in just 10 games in 2016, and started eight games with the Ticats in 2017, with eight touchdowns and 1,767 yards passing. 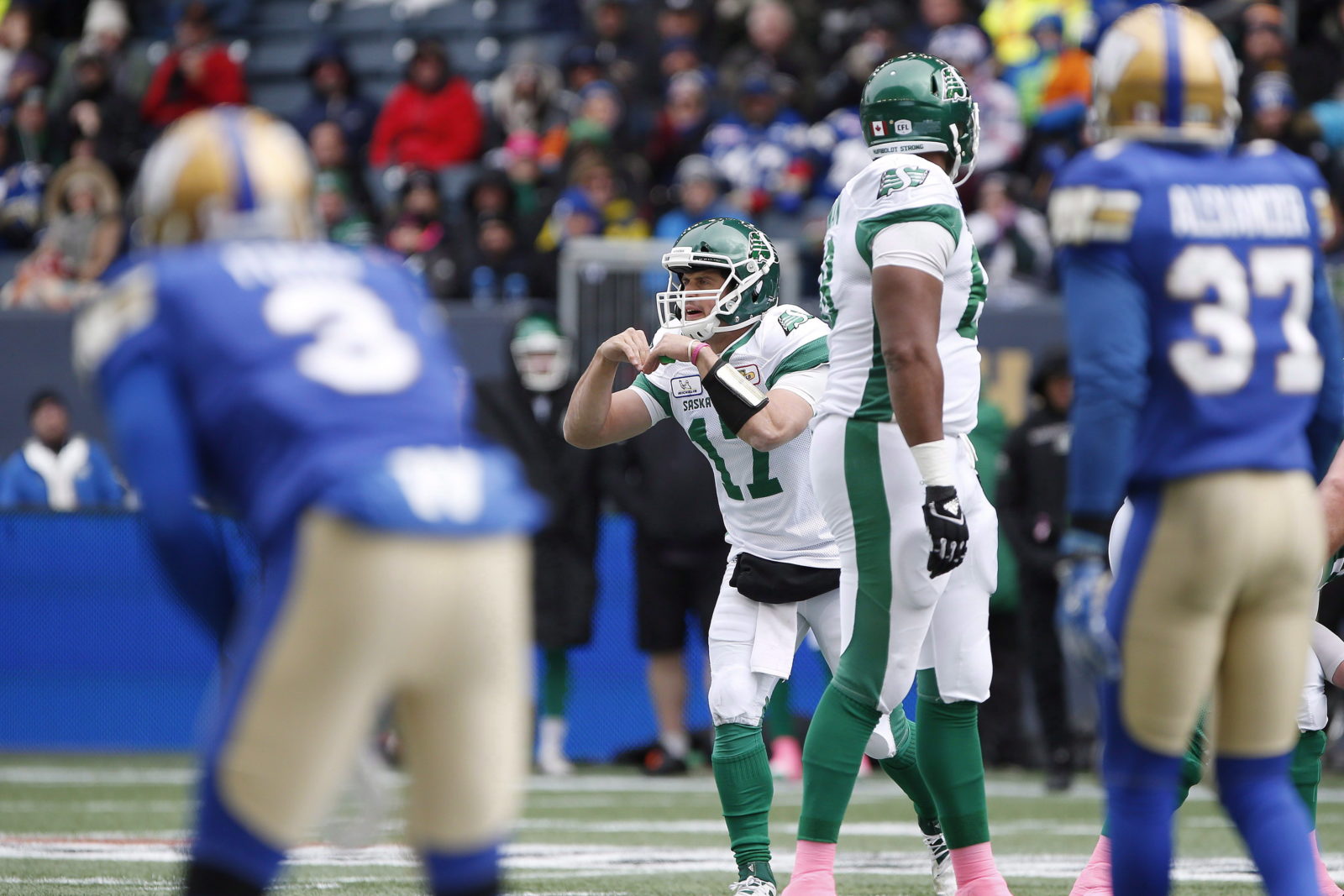 Collaros was traded by the Ticats to Saskatchewan in January of 2018 for a second-round draft pick and then re-signed by the Riders in February of this year. Collaros started Saskatchewan’s opener against Hamilton this season, but was injured on the first drive after a seven-yard run and on just the second offensive snap of the game. He was then traded back to the Argos on July 31st for a conditional fourth-round draft pick in 2020.

Collaros had resumed practising, but had not yet seen any game action with the Argos since the trade and therein lies the risk with a player with a concussion history.

The last full game for Collaros came last October 20th when he completed 24 of 35 passes for 352 yards in a 29-24 win over Calgary. He was injured a week later in a game against the B.C. Lions and while he practised during the days leading up to the West Semi-Final, he did not suit up in Saskatchewan’s loss to the Bombers.

The Bombers hope to have Collaros in Winnipeg ASAP and on the practice field and into meetings with offensive coordinator Paul LaPolice.

“We’ll reach out him – he just sent me a text asking the same thing – so we’ll reach out to him and see how long it takes for him to get his personals in order,” said Walters, “and then we’ll get him out here as soon as possible.” 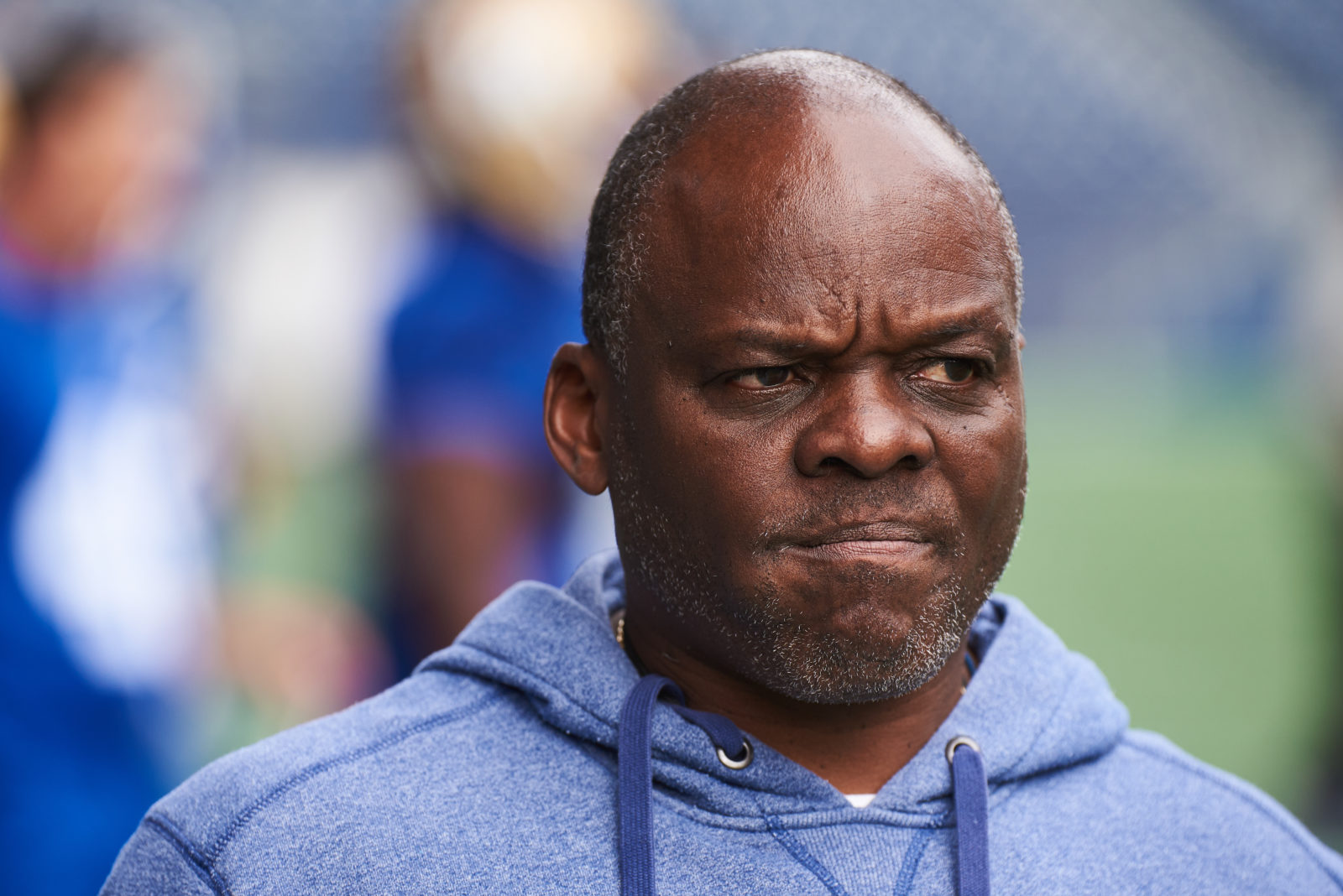 Bombers linebackers and defensive line coach Glen Young spoke with the media following practice Wednesday and offered some details on the absence of defensive coordinator Richie Hall and how the staff managed in his absence last weekend in Regina.

“First and foremost, Richie is a dear friend of mine,” began Young. “It’s an incredible situation that he’s going through. All we’re trying to do here is take care of him and try to do the best for him knowing that this is his show, his system. Between James (Stanley), JY (Jordan Younger) and myself we just try to do the best we can do to work things out the way we can until Richie is feeling good about where he is right now.

“I can’t even imagine what he’s going through. I can’t even imagine what that’s like with the demands of a football season and then that happens and the tailspin he must experience. In all honesty, that’s all I think about, is him. When I found out his brother had passed I was really distraught. I was upset in my office. I couldn’t contain myself. I have two younger brothers and I know he was very close to him.

OL Jermarcus Hardrick, S Brandon Alexander, DE Jonathan Kongbo were among those back at practice on Wednesday after taking a day off on Tuesday. WR Darvin Adams was still out, with Lucky Whitehead having shifted outside and Rasheed Bailey moving into the starting offence. FYI, O’Shea did indicate after practice that Adams should still be good to go this weekend against the Als.