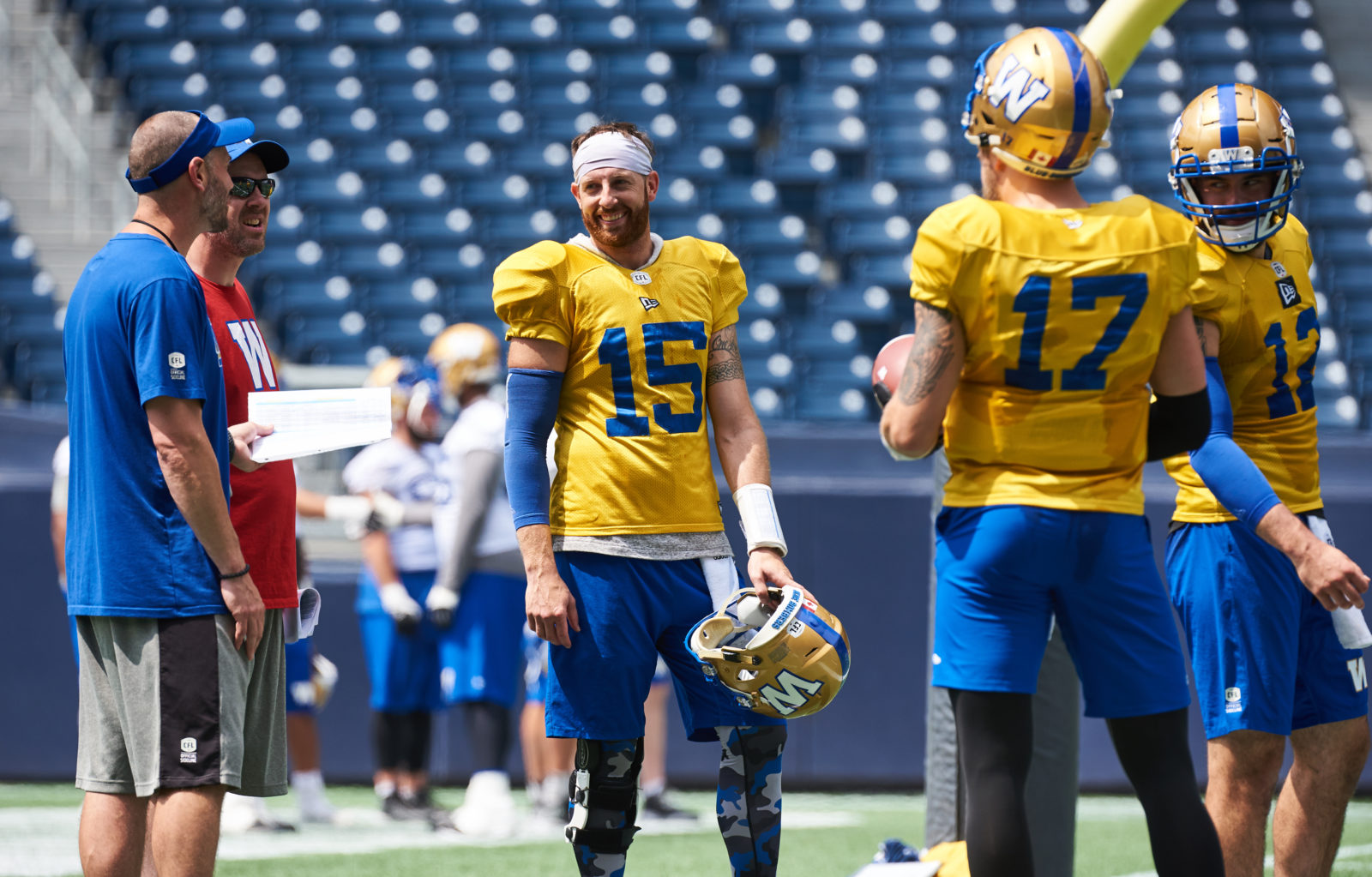 It’s not a lesson learned for Matt Nichols – he knows every line in the unofficial quarterback’s handbook already, after all – but it is a not-so subtle reminder about picking his spots a little more judiciously.

The Winnipeg Blue Bombers quarterback was back at his post leading the club’s starting offence at practice on Monday, just three days after exiting last Friday’s 29-14 victory over the Ottawa REDBLACKS following a nasty collision.

And after practice, the veteran pivot reiterated that he had no after-effects and declared himself good to go for this Friday’s home game against the Toronto Argonauts.

“It was just one of those things,” began Nichols. “Like I talked about after the game, I didn’t come back into the game but I was feeling great. I feel great and had a great day of practice today and looking forward to another good week.” 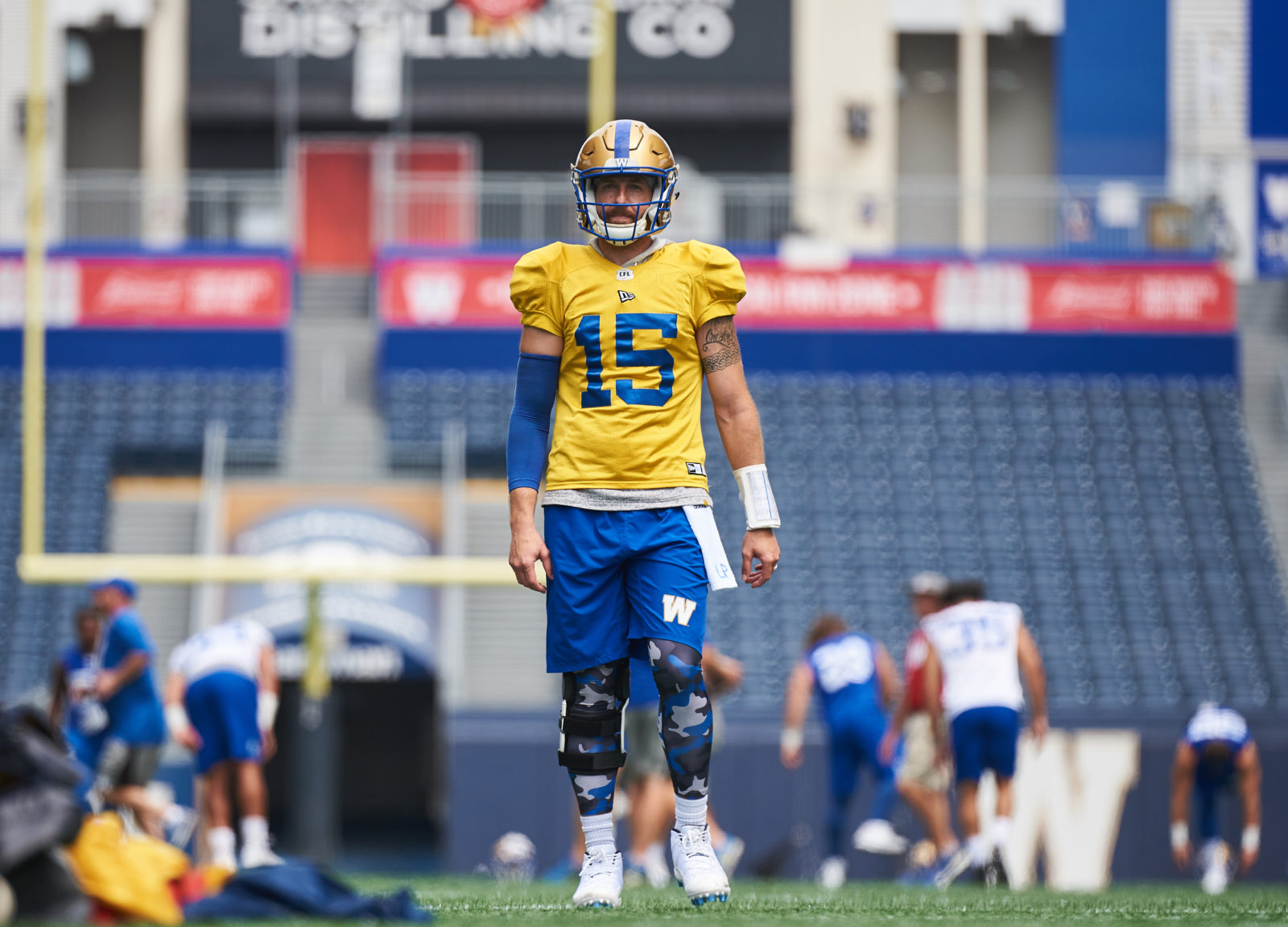 Just to recap, the Bombers were leading 22-4 in the third quarter when Nichols took off on a second-and-six from his own 19-yard line. Nichols had galloped for 18 yards when he was then part of a violent pile-up of humanity that also included two Ottawa defenders and Bombers receiver Charles Nelson.

He stayed down for a moment, walked off under his own steam to the club’s locker room and later returned to the sidelines in shorts and a T-shirt, but did not re-enter the game as Chris Streveler finished.

Nichols has seen the play a few times since it occurred, and as he indicated in a post-game media session, admitted that he should have made the decision to get down and avoid contact much earlier.

“I had plenty of time with no one around to slide… I kind of made the decision a bit too late and got myself into an awkward position,” he said. “I think if I just would’ve went full out into the blow-up I would have been fine, but I made the decision to slide too late and then all of a sudden you’re in a vulnerable position.

“It’s just a fine line for me. I need to get down earlier or go full steam ahead because that’s how you can protect yourself.”

Nichols was in the midst of his best game of the young 2019 season in Ottawa, having completed 16 of 20 passes for 262 yards, including an 82-yard bomb to Nic Demski on the Bombers second offensive play of the game.

The offence had two turnovers immediately after that, the first on a tipped Chris Streveler pass that was intercepted and the second an Ottawa fumble-return TD by Jonathan Rose after Nelson was hit and put the ball on the ground after a catch.

They did settle in with an important drive in the fourth quarter that took over five minutes off the clock, but it was the work with Nichols under centre that had the attack humming before his exit.

“It was something we talked about prior to the game – staying on the field as an offence,” Nichols said. “We didn’t do too many things to hurt ourselves. We had a couple of penalties we were able to overcome but, aside from that I felt like we were moving the chains and just staying on the field and giving ourselves a lot of plays.

“When we have the talent we do on offence and we’re getting a lot of plays and we’re able to spread the ball around to those guys we’re going to do some good things.” 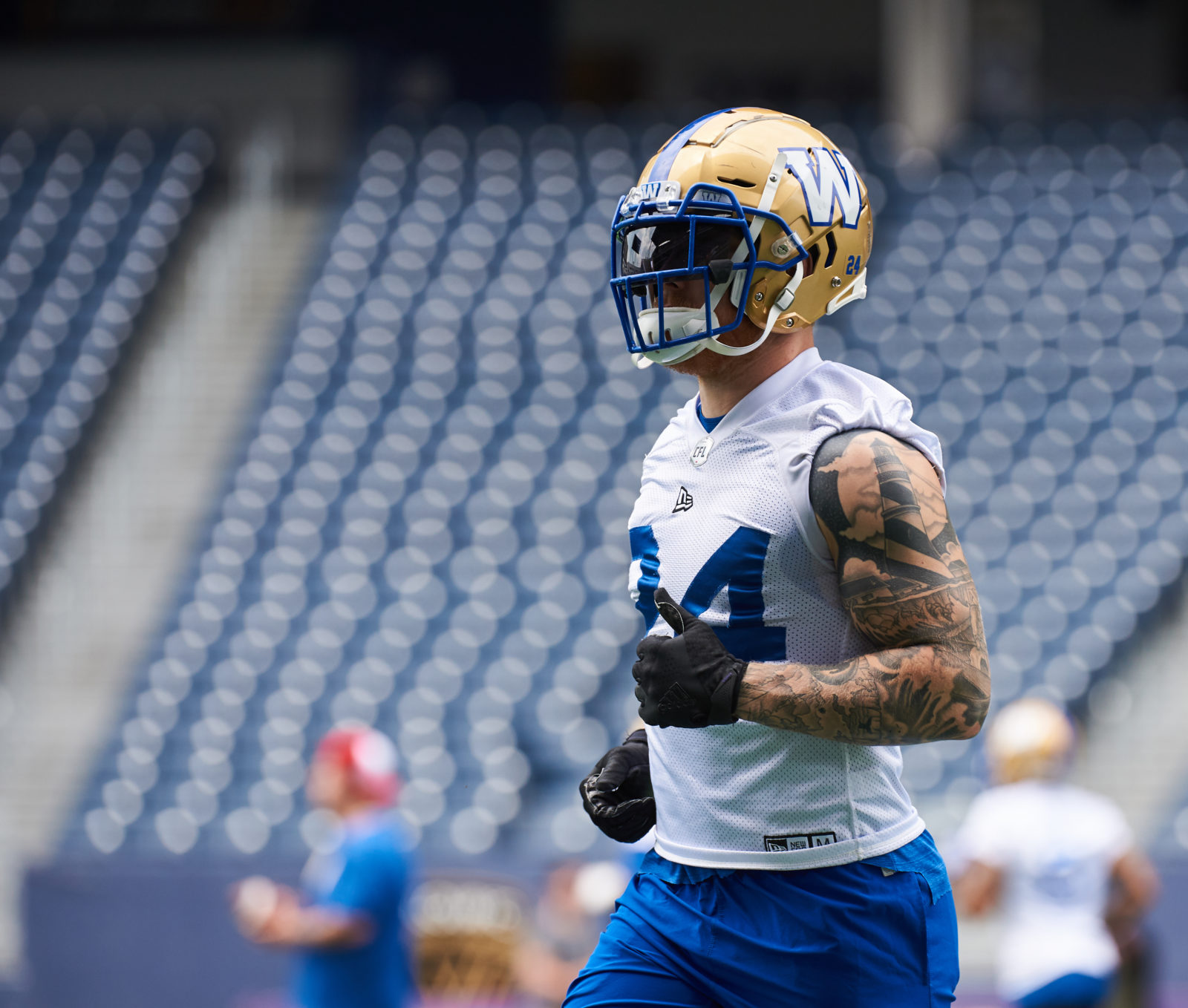 While Nichols was back practising, LB Adam Bighill, WR Chris Matthews and DB/LB Anthony Gaitor were all spectators.

Head coach Mike O’Shea said Bighill and Gaitor should be good for Friday, but Matthews – who suffered a hand injury in the win over Ottawa – is ‘going to need a week, for sure.’

Kenny Lawler, who started the opener in B.C., took turns working with the No. 1 offence in the absence of Matthews.

INTO THE RECORD BOOKS:

“It’s pretty special,” said Miller Monday. “Before that I think I’ve only had five (in a game) and that was tough enough to just get five. So that was pretty crazy.”

Interestingly, all seven of his tackles were against former teammate Ryan Lankford – who was released by Ottawa on Monday.

“This game, the returners just fell into my lap a lot of times,” said Miller. “We had a lot of guys doing some real good things on kickoff. I mean, Nick Hallett was taking two guys in the wedge all day and just freeing me up. DJ Lalama did the same thing when he stepped into that position. A lot of guys were taking on two guys and it just happened the returner came my way and I had to make the tackles.”

O’Shea, a coach who loves his foot soldiers, raved about Miller after practice on Monday.

“He’s been doing that – I know it hasn’t amounted to seven (special teams tackles) – but he’s been playing high-level special teams with an edge and competitive greatness since he’s been in the league,” said O’Shea. “This one added up to seven.

“He’s probably had games where he played really well and not gotten a tackle, but been dominant in all phases, it just didn’t work out where the ball came to him. That was a phenomenal game, phenomenal effort and I’m just honestly proud that I was standing there watching him.” 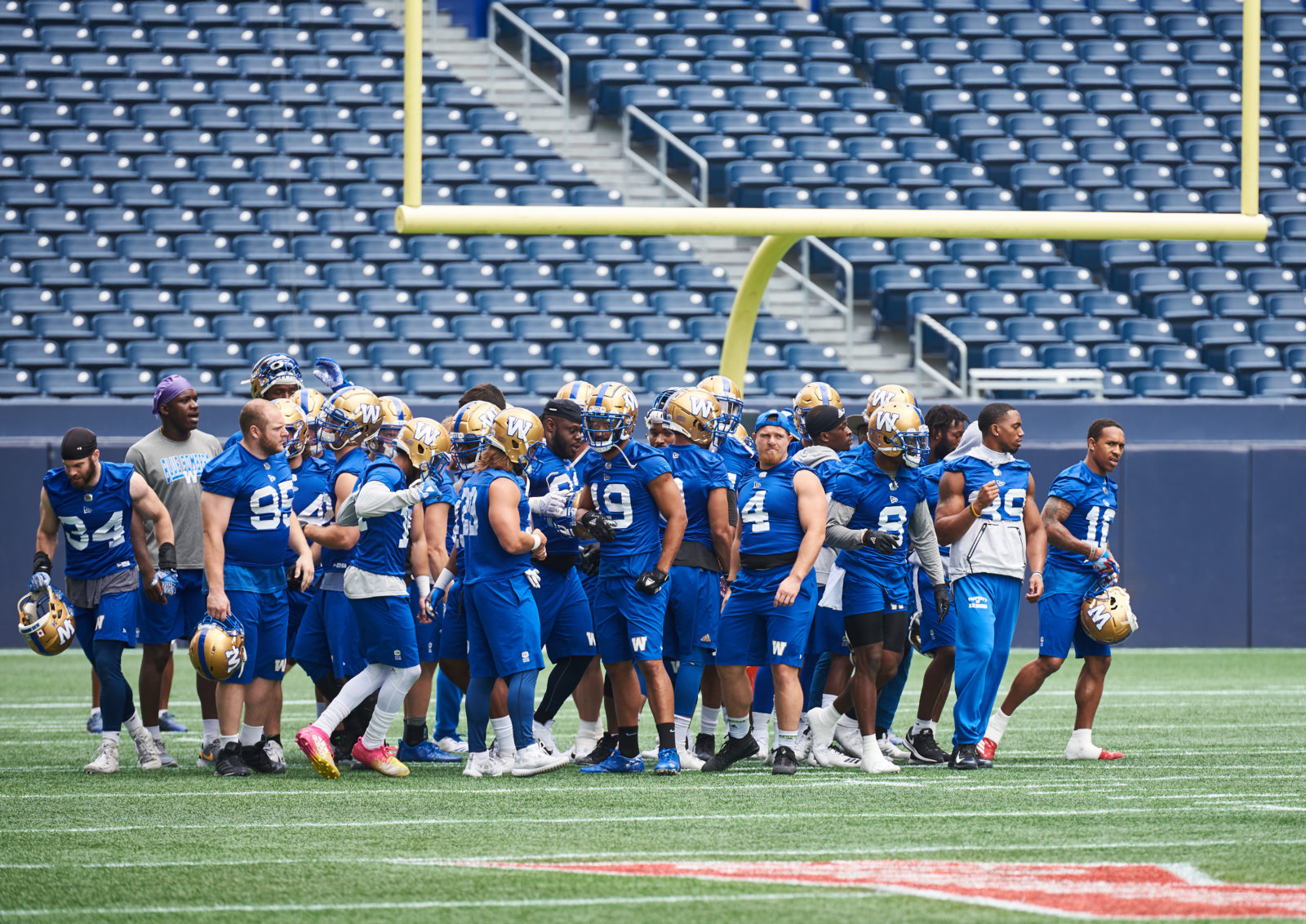 This from CFL stats guru Steve Daniel: the Bombers 39 minutes and one second time of possession Friday is the club’s highest total dating back to 1994. He said any mark prior to that would not be considered accurate or consistent.

The Bombers bolstered their Canadian content on Monday, adding defensive back Dondre Wright to the practice roster.

A 25-year-old product of Ajax, Ont. who played his college ball at Henderson State, Wright was a third-round draft choice (20th overall) of the Montreal Alouettes in 2017, Wright played in 27 games for the Als – 18 in 2017, including eight starts, and nine last year – and had 59 tackles during that stretch, but was released this June.

There are no CFL betting lines just yet for this week’s game, but don’t expect the Bombers to take the winless Argos lightly.

“I mean, I don’t know what the spread was last week,” said Matt Nichols. “That’s not something we focus on or even know about as players. For us, and I’ve been in this league long enough… it’s professional football; they’re a good football team and despite what anyone wants to say, turn on the film and they have talented football players. I know they have a good coaching staff over there, a lot of veteran coaches.

“So, for us, it’s our same approach that we have every week and that’s we need to put work out here on a daily basis, show up on game day and perform well on game day. We believe we have a good football team that when we do those things we can show up and win football games.

“You don’t just come out and expect to win a game… you’ve got to put in the work all week and I think everyone here understands that.”