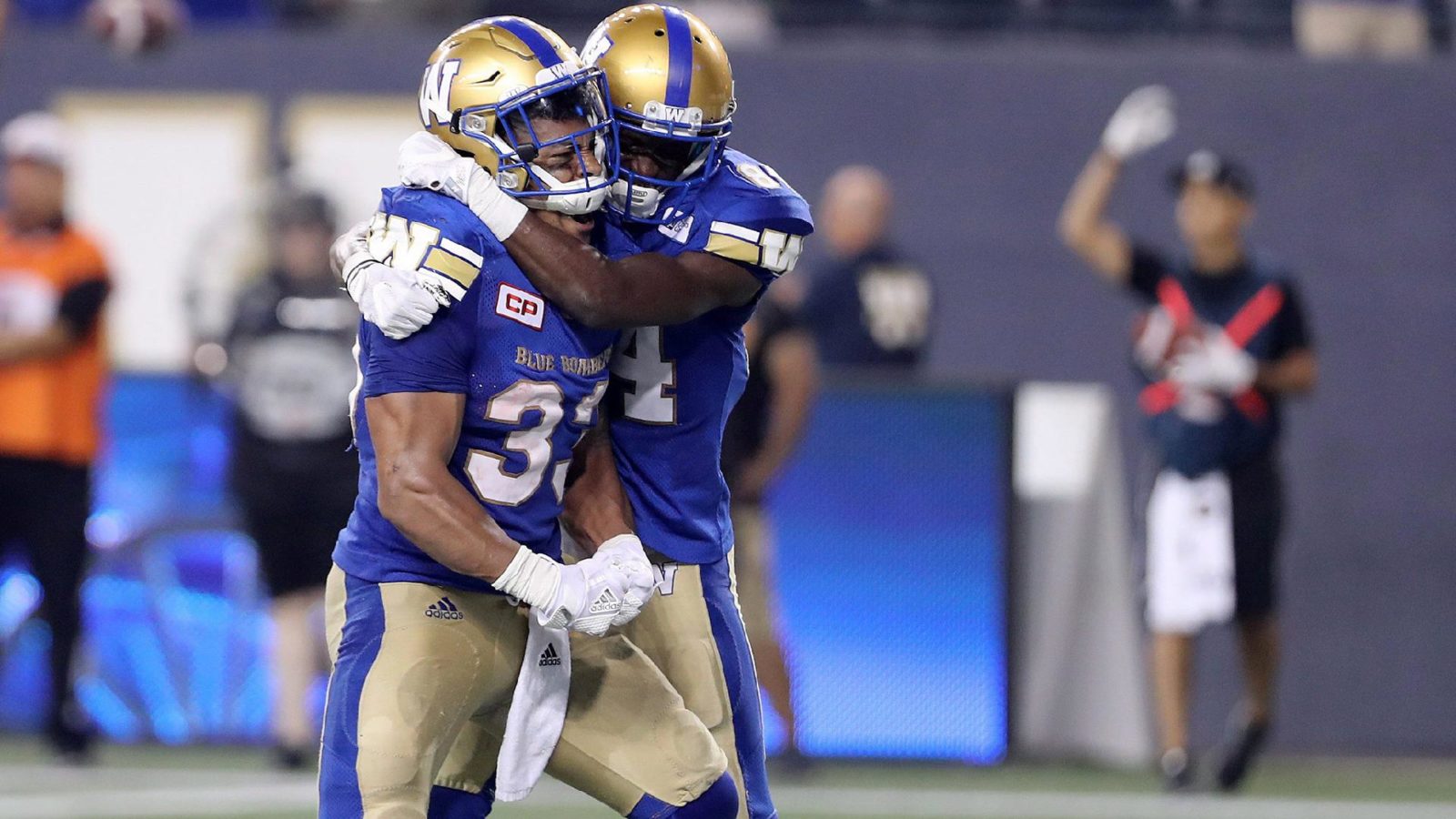 The Winnipeg Blue Bombers weren’t just dead. They were dead and buried, dumped into a six-foot hole while the Montreal Alouettes patted down the dirt on top of the grave.

And then an arm sleeved in blue and gold sprung out of the ground as the Bombers pulled themselves out to rally for an improbable victory that will certainly rank as one of the greatest comebacks in franchise history.

“This is about last week (a 45-42 loss to B.C.)… we didn’t rally when we were supposed to last week. We’re learning, we’re growing and to come out and finish this week just shows our character as a team.”

Let’s rewind a bit here with a few details that outline an incredible victory – it ranks right up there with Milt Stegall’s 100-yard game-winning TD in that win in Edmonton in 2006 – that pushes the Bombers to 3-2 on the season.

The Alouettes appeared to have their mitts completely wrapped around this one with 2:03 left in the game after Stefan Logan sprinted 31 yards for a touchdown that put the visitors up 40-28.

Down by 12 points with 95 seconds left, the Bombers quickly pieced together an eight-play 69-yard drive that was capped by a Matt Nichols-to-Ryan Lankford TD with 44 seconds left. 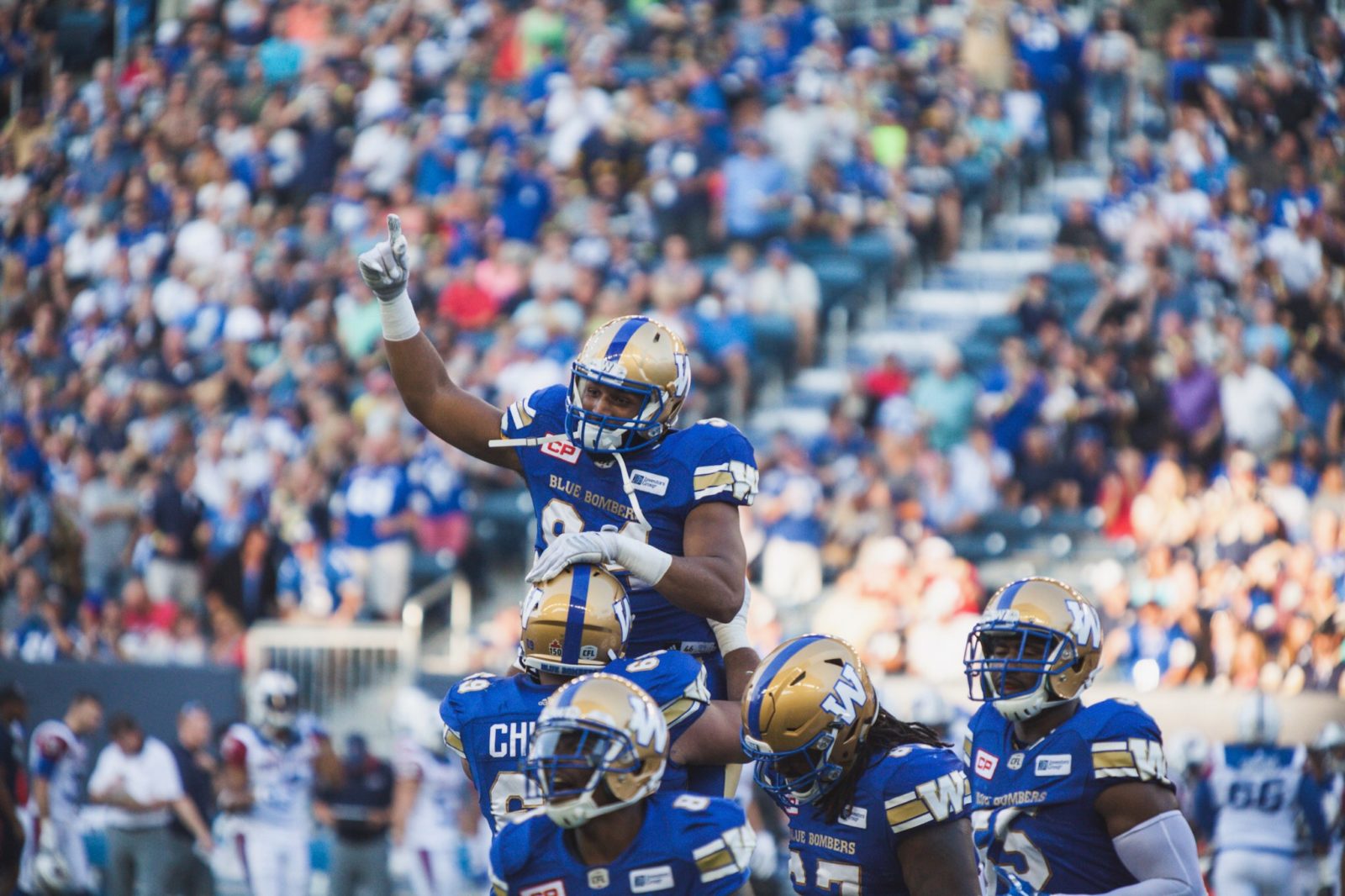 The margin now cut to 40-35, Justin Medlock then fashioned a perfect on-side kick that was recovered by Brandon Alexander at the Bombers’ 52-yard line. And then Nichols went to work again, hitting T. J. Thorpe for 13 yards, and then benefitting from a Chris Ackie roughing-the-passer penalty – he made contact with the quarterback’s head on a violent collision – before connecting again with Thorpe for four yards, Darvin Adams for 10 more, then running 15 yards himself to the Montreal one-yard line with four seconds left.

And on the final play of the game, Andrew Harris was hit hard outside the goal line, but kept his balance by putting his hand on the ground before managing to find the end zone for the victory.

“It’s the CFL… you’re never out of it,” said Harris. “It’s the DNA of our team. We’ve got a lot of fighters, a lot of dogs… B.A. (Brandon Alexander) makes that big play on the onside and that drive that got us into that situation was huge for us. You could tell that defence was tired; we wore them down a bit in that third and fourth quarter. We went no huddle and they were trying to sub guys in and we took advantage of that.

“You can’t quit in this league. You’ve seen it too many times where people come back and it’s really not over until the fat lady sings, as they say. We’ve just got too many fighters and for us to keel over when there’s a minute thirty left, down by 12 points, that’s just not in our DNA.

“This is a big win for us,” added Harris. “We made it hard on ourselves, but we grew a lot tonight.”

Indeed, the victory wasn’t without its serious blemishes for the home side. The Alouettes cranked out 495 yards, including 183 along the ground, while the Bombers also took seven penalties for 87 yards that were critical in gift-wrapping points for the visitors. The normally reliable Medlock also missed two field goals, clanging a 45-yarder off the upright while going wide right on a 37-yarder.

Nichols took a pounding, being sacked three times, but rallied to post some incredible numbers – 34 of 43 for 358 yards and two TDs, much of it late when the club needed him to lead.

“That was just resilience; a group that refused to give up,” said Nichols. “I just couldn’t be more proud of my guys. That’s why the game is four quarters. Everyone’s been talking to me about first quarters, third quarters… whatever they want to talk about, but this game is four quarters for a reason.

“Our job is to score one more point than the opponent, play four quarters, clean football… we did that tonight and came out with the win.”

Nichols, who was rather robotic while speaking to the media after the game – he said he was exhausted – offered this when asked about the last two possessions:

“We knew we could score quick and it was a matter of getting out of our own way a little bit,” he said. “We went right down the field, scored. Minute left, all we really wanted was an opportunity and our special teams went out and executed (the short kick) perfectly and got us the ball back.

“As soon as (Alexander) jumped on the ball, I knew the game was over. We were going to go win.”

The last word goes to Bombers right tackle Jermarcus Hardrick. He spoke after last week’s crushing loss to B.C. about the benefit of a short week and being able to get the bitter taste out of his mouth against the Alouettes.

And so, how does this one taste?

“That’s a sweet taste, right there,” he said with a size-large grin. “I don’t know what the Canadian-version of the candy might be, but that tastes like Smarties to me. For real.” 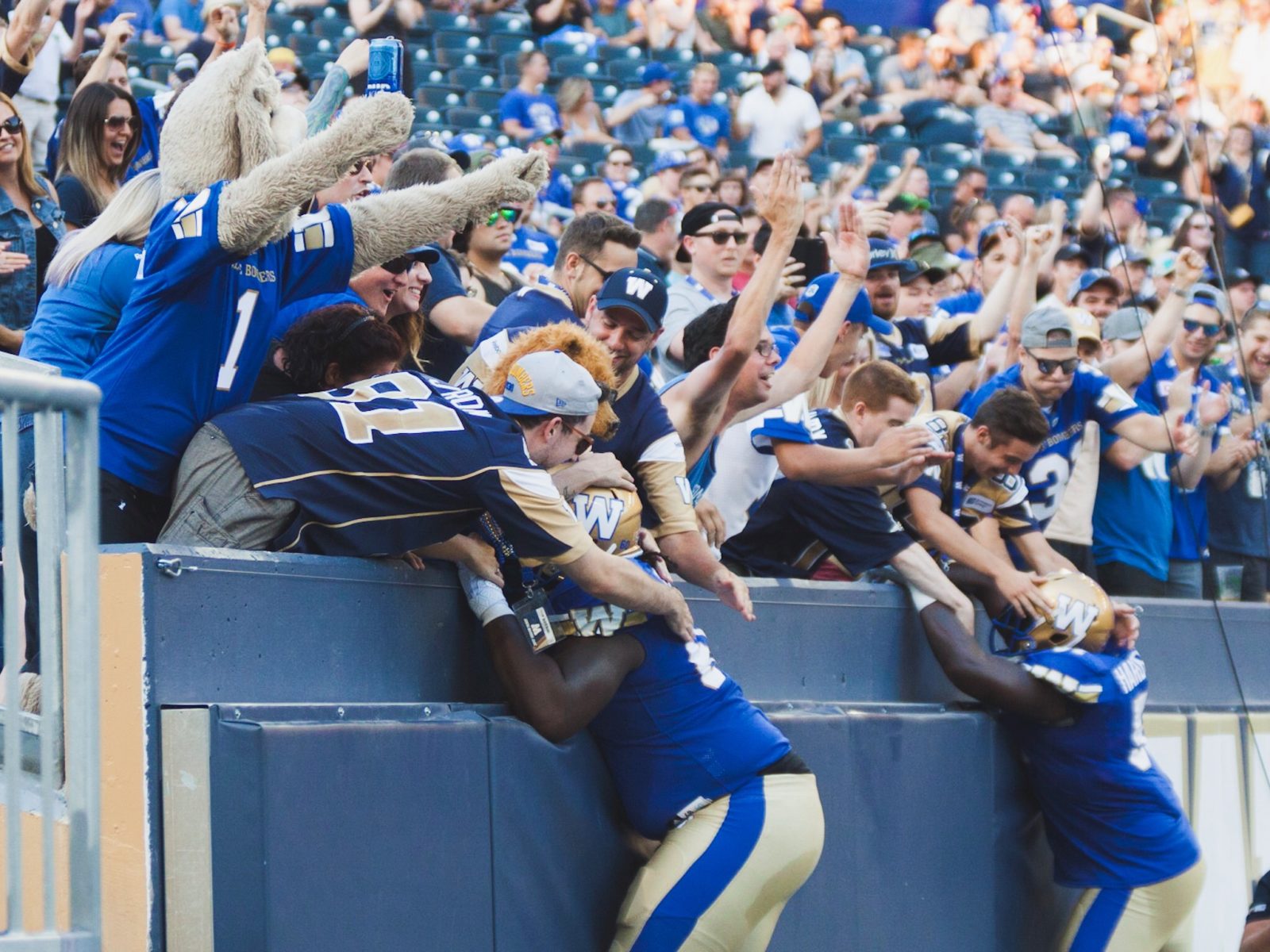 13: Points scored by the Bombers in the final 1:35 in rallying to beat the Alouettes. Winnipeg had yet to score a fourth-quarter touchdown in its first four games and had been out-scored 42-9 in the final 15 minutes.

Andrew Harris was busy on the night, rushing 12 times for 41 yards and pulling nine passes for 93 yards. Those nine receptions keep him on a pace, although very early in the season, to break the CFL record for receptions by a running back in a season. Craig Ellis owns that record, having pulled in 102 passes in 1985.

Weston Dressler, the Bombers leading receiver, took a hit after a reception in the first half and the club announced he would be doubtful to return. He continued to hold on placekicks for Justin Medlock, but Ryan Lankford replaced him in the offence. Dressler finished with two receptions for 24 yards; Lankford had seven for 53 in his place. After the game, head coach Mike O’Shea said Dressler’s injury was ‘lower body’ and he’d be evaluated in the next few days.

183: Rushing yards by the Alouettes.
50.3: Average rushing yards against by the Bombers in the first four games, top in the CFL.
18.3: Punt-return average for Kevin Fogg, who returned to the lineup.
5: Sacks by the Bombers, including a pair from both Jackson Jeffcoat and Jamaal Westerman
1/9: Interceptions by the Bombers – Jeffcoat picked off Darian Durant on the first possession – pushing their season total to nine, most in the league.

“Crazy. That was a wild finish. I don’t think the guys feel good about the first half, but they certainly battled hard in the second half and I’m telling you, with that minute 40 left… the offence was talking about it on the sidelines: score, onside, score. They believed it and went out and executed it. It was well done at the end. We can talk about the other stuff tomorrow and fix it, but you can’t take anything away from that effort and the finish and the win and they should celebrate it tonight with their teammates because that was incredible.” – Mike O’Shea.